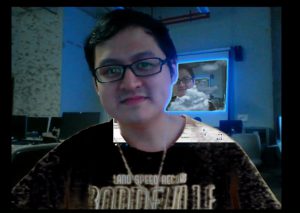 There were a couple of tests which were made during Thursday’s broadcast. Firstly, I decided to test if I was able to set the Chroma Key. That worked, so I decided to test if I was able to do two Chroma Keys simultaneously. Surprisingly, It did. While this was happening, I also decided to change the contrast and color/ saturation levels to see if it improved the keying, and I’ve come to the conclusion that although it worked to a degree, it would’ve been much better if I went to a room with better flat lighting. The test was conducted in a darker room, and as a result there was a lot of grain being picked up by the already low resolution laptop webcam. Another way to fix this would be to borrow the school’s webcam, which wouldn’t be too far out of the realm of possibility.

I also attempted to remove the blue off the projector screen behind me, adding a Gif clip of clouds. In that layer itself, I attempted to saturate the background before keying out the blue skies. Once that worked, I decided to superimpose another image of myself to see if it would affect the latency, which to my knowledge it hasn’t. I also tested the chroma key on my own shirt, which was orange in color. The only thing left to test would be to capture the broadcast from Facebook. Since no direct line of communication and live interaction is necessary (due to the participants eating), the broadcast wouldn’t be a big issue.

I also had a green suit made, which i will be wearing on the day of the broadcast. Another set of orange fabric will be brought forward in the event that I need to key something out separately. That would prove to be a little complicated as the color is close to skin tone. 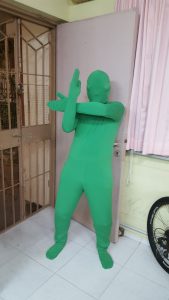