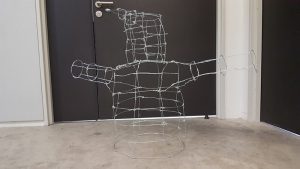 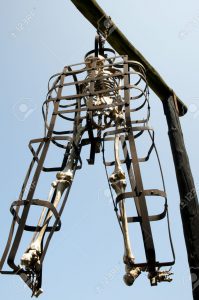 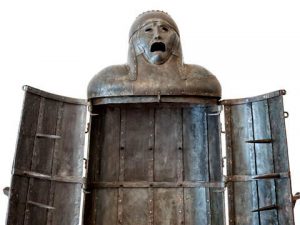 For my project, I’ve decided to work on a steel wire mesh suit. This idea came into fruition as I was looking at pictures of bear suits and Iron maidens. I had initially thought of using flexible steel or bronze plates, but eventually settled with steel wires due to budgetary constraints. The material chosen also came with its own set of disadvantages. Firstly, weaving the suit was slightly difficult. There was an alignment issue with the helmet in terms of overall diameter and straightness of vertical columns. I initially used a single piece of wire for the vertical columns, but as soon as I begun work on the chest piece, I decided to weave the vertical columns one at a time to avoid the issue of having to cross over and under the horizontal wires.

I also gave some leeway for the belly area as I wanted others to be able to wear the suit. Once that was weaved, I attached the helmet on top of it, and soldered the cross sectional areas as there were pieces of steel wire sticking out. The easiest way to solder the loose ends was to align them with the adjacent wires so that it would only require as little surface area of contact to solder together.

The initial idea was to have a self-contained air conditioning suit that would cool the user through the use of numerous ice cubes, which are suspended around the rig. However, just wearing the suit itself and keeping it on is a feat in and of itself. I recommend that everyone give this experience a try as it’ll change the way that they perceive and interact with the world.