Zsa Zsa Zsu is a music video that was done by a Bandung-based music band called Rock N’ Roll Mafia(RNRM). For the music video, the members of RNRM uses buttons and beads to create a stop motion animation to pair with the music. The lyrics of the song depicts the experiences when a new love interest appear, explaining from both the male and female perspective. The phrase “Zsa Zsa Zsu” first appear in Sex in the City and were used to describe the “lovely, butterflies feeling” when you are with the love interest.

a bloody gorgeous man pours bloody mary into my glass

he asked me a couple questions of courtesy

and for god’s sake he stunned me

his voice so sweet like the mellow sound of saxophone

I bet he’s good at sex on the phone

she’s a happy maiden liberty, she got no wrong in her life

twist your head to change your point of view,

I give you my deepest condolences

and who the hell is she? real thing in front of me,

oh I just only see, but my heart is agree

and who the hell is she? real thing in front of me,

we are a perfect match, cause we will become a featured cast

The use of buttons and beads were no coincidences as well. It were meant to be a tribute to Bandung, the centre for garment manufacturing and Rock N’ Roll Mafia’s hometown. The blend of electronic music and stop motion animation with buttons and beads created a rather strange yet fitting video

The director of the video goes by the alias of Tromarama; which is actually an art collective consisting of Ebie Babyrose, Herbert Hans, and Ruddy Hatumena. All of whom (Both the band and the collective) hail from Bandung, Indonesia.Stylistically the video harks to Tomorama’s style of low-fi and use of the everyday. However the resulting visuals speaks to the collective’s ability to create a polished product no matter the medium; creating a work that invokes a sense of nostalgia and of days past. The buttons and beads also pay tribute to their hometown of Bundung; renowned for being a locus for garment manufacturing. 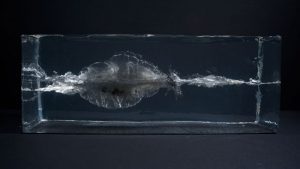 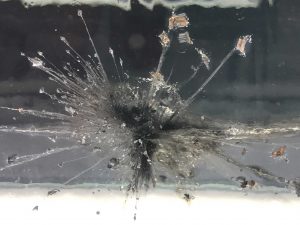 A close-up of one of the vitrines in “AK-47 vs. M16,” an installation by the Propeller Group made by firing bullets through ballistics gel, a material used by engineers to see how bullets explode.

The second work I’d like to talk about is the AK47 vs M16 installation by the propeller group, a collaborative work between art collectives from Ho chi Minh and Los Angeles. The founders are Tuan Andrew Nguyen, Matt Lucero and Phunam Thuc Ha. In this ultimate video edit, we see footage of assault rifle use from movies such as The american sniper, the lone survivor, jarhead, black hawk down, lord of war, children of men, apocalypse now, full metal jacket, platoon, we were soldiers and many others.

In each movie, there is a different telling of the frontlines, and the nature of war itself. In the movie, we were soldiers, we see the Battle of La Drang unfold, and watch as the weight of the Marine corps’ hubris collapse like a deck of cards. Interestingly, the vast military superiority of the united states was undone due to its outdated “search and destroy” doctrine, which was a new variant of attrition warfare. Instead of strategically capturing positions and routing the enemy, the soldiers would go on search and destroy missions in the aim of fulfilling a kill quota. Anyone well versed in the art of war by Sun Tzu would immediately see the flaw of such a strategy. Firstly, numbers alone don’t confer victory, secondly, the VC would often use the tunnel networks and the cover of the forest to redefine the front, evening the playing field.

Technologically, the newly issued M16 weapon initially suffered from what was referred to a type II malfunction. This meant that the shell casings would remain lodged in the chamber. The cause of this was eventually determined to be an inferior grade of gunpowder which was not tested properly. This crucial second would be the difference life and death, as shown in a sequence in the movie “full metal jacket“, where joker gets the drop on a female Vietcong sniper but lost the element of surprise as his weapon jams. (These problems would eventually be addressed in later iterations) Inversely, production of the AK47 still persist to this day due to its low production costs and reliability.  It can be dropped in mud, sand, snow and water, and even fire reliably (However, it should also be noted that there was also a high rejection rate in the production of the receiver). The 7.62 mm caliber round also outperforms the 5.56 mm round in terms of penetrating power, although its slightly shorter barrel means that overall accuracy is affected in distances longer than 400 meters. This “impediment” wasn’t seen to be an issue as the Russians deemed through experience that the range of 100-400 meters is where most combat usually occurs.

The cheap price, interchangeability, simple production doctrine and universality of the weapon was what stood as the antithesis to the symbol of the american dominance, with the AK47 being sold in over 100 countries. Recently, Anti-Assad forces fighting in the region of northern Aleppo and Idlib have had the support from the US in the form of armaments shipments. (according to documents released by the US’s Federal Businesses Opportunities)

Proxy wars or state sponsored terrorism isn’t new, however, as there has been a long history of the United states sponsoring militant/rebel groups in an effort to destabilize governments loyal to the Soviet government, which is also understandable given the dark history of failed marxist policies and Dekulakization. What I find interesting is that the weapon of choice in which to supplant them was still the AK47, further associating the image of the weapon with tyrannical governments, revolutionaries and power vacuums.

Another technological advancement was the use of helicopters in the field of combat. Although the Bell UH-1 was able to quickly deploy marines in thick jungle and redefine the front uncontested for the most part, the loud noises of the single turboshaft engine rendered the charge useless as they had lost the element of surprise. (as seen in Apocalypse now, Full metal jacket, and we were soldiers) Vietnamese soldiers hearing these sounds would flee in time before the ensuing conflagration, hiding in the forests or retreating to the safety of the underground tunnels. Although there were tunnel rat divisions in charge of flushing these people out, they would often run into punji stick traps and anti-infantry mines, some of which were disarmed and recycled from american mines.

At around 1947, the army had done some study on kills on the battlefield and found that only 2% of the army were intentionally shooting to kill. Interestingly, the analogy used in the movie The american sniper summarizes the army succinctly using religious allegory, stating that in war, there are three types of people: The wolf, the sheep and the sheepdog. The wolf represents the psychopath that cannot process human empathy in others and thus has no compunction in killing. The sheepdog represents the minority of people who kills out of love of his comrades, and possess natural leadership skills. However, the “shooting to kill” percentages of remaining troops had also recently increased to 95% in the gulf war. The reason for this is just as interesting.

B.F.Skinner, who was well known for the introduction of behavioral reflexes, was later referenced, with his ideas serving as a template for training new recruits. Instead of using circular targets, as had been done in previous wars, the army had decided to use human shaped targets. The idea was to condition recruits to reflexively shoot targets bearing the silhouetted profile. This idea worked. Unfortunately, no training was given to help veterans deal with the post traumatic stress of killing someone.

The “PlayStation” generation had also raised a new age of people who get into the front lines knowing exactly what to expect. They are no longer the naive dough boys who’ve only heard secondhand anecdotes of trench warfare, but are already well versed on the nuances of urban combat through combat simulators and realistic virtual reality games.

As someone who was once trained with an assault weapon, I can understand the appeal of the AK47 and the M16. I don’t see this sadistic romanticism ending anytime soon, and it’s not like I’d want to anyway. As bad as it is, violence and suffering is every bit part of the overall human experience as happiness and goodwill.

I went to the cinerama exhibition as part of another course module, and as such, had written an article prior to this assignment. For this trip however, I decided to write more about the AK47 vs M16 exhibit this time round.

Overall, I felt that the pixel art exhibition to be an interesting experience. The ballistic gel exhibit by the propellor brothers was certainly an interesting introduction into the dark and brutal reality of mechanized warfare. At first, It looked like the jellyfish exhibition that I’ve seen a few weeks back, which was part of the “The Oceanic” exhibition at the Nanyang Technological University gallery. However, this exhibit was anything but normal. Though the whole concept of warfare, proxy wars and violence isn’t anything new to me, I still enjoyed the overall juxtaposition, and rather than going out feeling a little bit more moody, I felt that the experience was more of a reinforcement and reminder of what war is, and how everyone plays this game.

On a lighter note, the Zsa Zsu Zsu stopmotion film was a fun little exhibit that I can certainly appreciate, being a graduate from the school of 3D animation in Nanyang Polytechnic. Though I focus purely on 3D animation, I can certainly enjoy the occasional stopmotion craftsmanship and adapt some of the aesthetics onto my own works. It also brought me back to the time when I saw the music video of “Fell in love with a girl” by the band “The White Stripes”. On the choice of medium (buttons), it certainly brought me to the time when my mother would sew uniform buttons on my uniform as I was rambunctious in school and would occasionally get into a scuffle or two, which would often result in having some of my buttons ripped out. Suffice it to say, it brought back a feeling of nostalgia.

If there was one criticism for the exhibition, it would be from the tour guide itself. I didn’t think it would be necessary for him to be at the site as he was just reciting what was labeled. There was also this exhibition titled: “There’s a word I’m trying to remember, for a feeling I’m about to have” where I tried lying down on the soft seat, but was yelled at by the security guard. Apparently, I wasn’t supposed to lie down on it, but the soft plush seat was signalling otherwise. If it’s really an issue, I feel that they should just use regular seats with cushions instead. That altercation really annoyed me as his reaction was disproportionately and unnecessarily incensed, and I ended up leaving the exhibit forgetting everything that I saw in there.