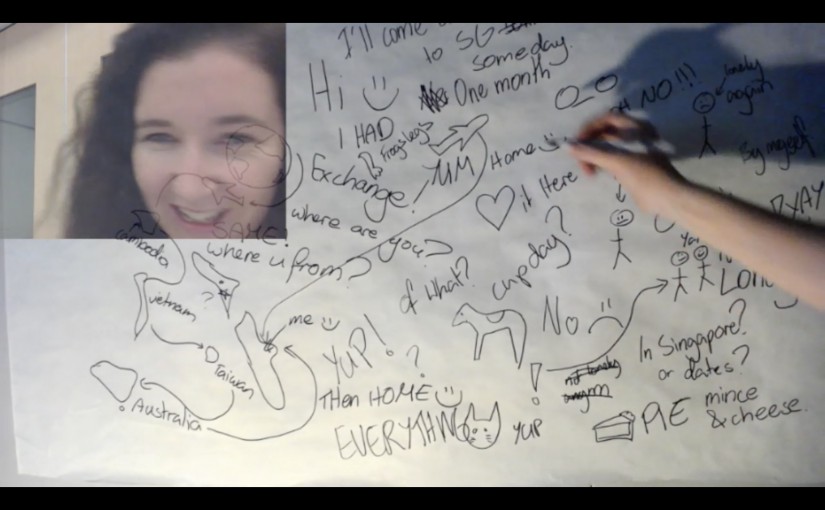 Atypical conversation is a project about blurring the lines between the first and third space. Initially it started as an idea to see if I could immerse myself fully in the first space while still being able to interact with people in the third space. However it evolved into a work which explores ideas of displacement, being able to exist in multiple spaces simultaneously,  visual and verbal communication and conversation. It also became a sort of critique to immersing ourselves too much in the third space in terms of communication.

In this performance, I draw my responses and replies within a conversation with someone who I can only hear. She could only see my drawings and I could only hear her through Skype both of which were collated and broadcast live via Youtube.

Initially I was inspired by a moment in one of the performances of Rosa Menkman’s Collapse of PAL(2011). At the end of the perfomance the artist Defi paints over the screen (the viewer’s window into the third space) which breaks it  and forces the viewer back into the first space. You can see how much this upsets the children as they try to stop the artist.

This led me to think about how you could be so immersed (existing?) in the third space despite existing physically only in the first space. However, rather than break my experience of the third space like Menkman does, I wanted to embrace it and find a way to merge both the first and third spaces. The third space collapses space and time enabling you to exist in multiple spaces at once. In Kit Galloway and Sherrie Rabinowitz’s A Hole in Space one screen was set up in Los Angeles and the other in New York, they were then connected live through satellites. The people on the streets became participants who interacted with one another like they were just passing by despite being 3000 miles away. These people existed both in Los Angeles and New York simultaneously. Similarly in Annie Abrahams’ The Big Kiss (2007) she exists physically alone in her house however, in the third space she is joined with a partner (who is also alone in the first space) and, through the screen, they exist together in the physical space of the gallery.

We have established that through the third space we can exist in multiple spaces at once, yet I would also suggest that it is very difficult to make yourself equally aware or immersed in both spaces simultaneously.

much like how one forgets the pen when writing they also forget the physical interface when chatting on the internet. If you extend this idea so that our concern is conversation, then becoming immersed in the third space of communication also makes you unaware or oblivious to first space communication.

If you have a phone on the table between two people, the people in the conversation feel less connected to each other. (Sherry Turkle)

Turkle suggests that even the mere presence of a phone (our pocket sized third space) will make the conversation more shallow and less engaged. This is the power of this third space over the first. Therefore I wanted to create a way to mediate this by immersing myself in the first space while still communicating in the third space.

To do this I set up a space where I could listen to a friend on skype (third space) but only reply by drawing on the paper (first space). This effectively turns the paper into an interface through which I can interact in the third space. The media of ink on paper is important as it conveys emotions. When receiving a handwritten letter you can feel the emotions behind it through the way the strokes are made. It also consists of physically moving my body which immerses me more in the first space. For the first iteration of my project I invited three of my friends to have a conversation with me while I could only draw responses. It started very awkwardly because no one had any idea what to talk about, later on it also became difficult to keep up as they began their own conversation to which I could not draw fast enough. I decided that for this to work it had to be a one on one experience where we both work together to navigate the speed and direction of the conversation.

For the second test I used a similar set up however I only invited one person instead of three. Even though it seemed forced in the beginning as I was trying to steer the conversation, the dialogue began to flow and become two-way communication when I allowed myself to let go and just respond to Georgia’s conversation. Some more personal things also came up as the conversation changed and evolved like it would in a normal conversation with friends. I also felt like I was able to respond faster (despite not actually responding faster) as we were connected in a conversation and the pauses had become a part of that. I would even forget that I was drawing instead of talking at times. Perhaps I was actually immersed in the conversation over the first space? Grace who was my partner for the final broadcast is also from New Zealand and studying in Singapore so I started off the conversation by talking about the idea of displacement. This is relevant because we are physically away from our home and the 3rd space deals a lot with the idea of displacement in space and time. However I still allowed the conversation to flow like a normal one and change direction and topics just seeing where it ends up. It is also interesting to note the differences between verbal and visual communication. When I skyped with Georgia who I know a lot better than Grace, I did not find much difference as she would understand what I was trying so say before I had finished drawing it. But with Grace I definitely felt as if they were different. I (visual) could not be understood as easily or so quickly so I found I could only respond while Grace (verbal) had to step up and lead the flow of conversation.

In the rehearsal we decided the piece would work even better if I showed myself moving around the page. Webcams already have

A sense of documentary authority and of liveness that is central to its appeal and status (Dixon, S., 2007)

so showing myself on screen more establishes me as a real person having a real, live and spontaneous conversation. The final piece ended as a success despite the skype call dropping out in the middle of my piece. This gave the work more of a narrative structure and also forced me to keep going and improvise due to the piece being live. After I lost Grace I became hyper aware of the audience and it felt as if I were having a conversation with them instead of my absent partner. Being live I had no idea where the conversation would end up or what would happen which gave the piece a spontaneity and freedom it wouldn’t have otherwise.