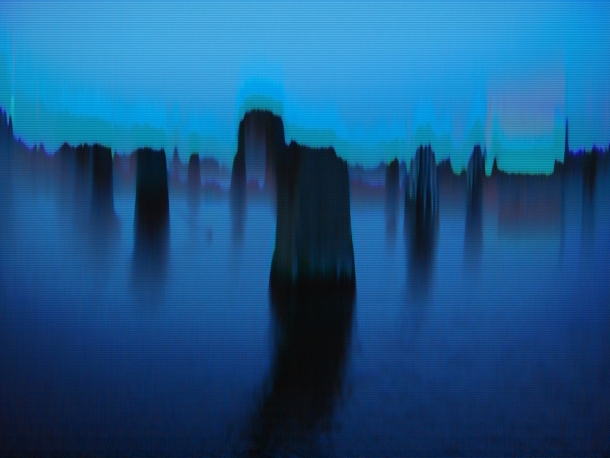 This is also how I also felt after watching Rosa Menkman’s Collapse of PAL (2012). Confused I took to the internet to find out what PAL even was. Turns out I have been unknowingly using it for years while watching the display on my family’s TV screen. The ‘collapse’ must also mean that this medium is no longer used and yet I had not heard of TVs changing systems unlike how I heard about Telecom (a Telecommunications company in NZ) getting rid of their GSM network. After some further internet delving I found out that the DVB that replace PAL is called Freeview. This Freeview was marketed as a New Zealand free to air system which was like a free SKY TV. I had neither realised that this was a worldwide phenomenon or made the connection between it and the Collapse of PAL. I had unknowingly experienced the collapse of PAL something that I had unknowingly been using.

“This death sentence, although executed in silence, was a brutally violent act that left PAL disregarded and obsolete” – Rosa Menkman.

I realised that I had been regarding PAL as obsolete and irrelevant and that to understand Rosa Menkman’s work I had to change my perspective.

After Watching again I thought that perhaps Rosa saw herself as the Angel of history. She is forced to watch as constant new developments are made to technology to make them ‘better’ creating a pile of obsolete old technology which has become worthless.

“Where we perceive a chain of events, he sees one single catastrophe which keeps piling wreckage upon wreckage and hurls it in front of his feet. The angel would like to stay, awaken the dead, and make whole what has been smashed. But a storm is blowing from Paradise; it has got caught in his wings with such violence that the angel can no longer close them. The storm irresistibly propels him into the future to which his back is turned, while the pile of debris before him grows skyward. This storm is what we call progress.”- Walter Benjamin

She utilises a pile of dated and obsolete technology to create this work, the images are made with materials such as the analog PAL signal from a NES and a broken digital photo camera. For the sound materials such as feedback, morsecode and an old Casio keyboard are used. The glitch highlights and celebrates the imperfections of the media, finding beauty in what others would call broken, wrong and failed which breaks away from progress’s race to perfection.

For me I found it interesting to celebrate old technology rather than disregard it as useless. It has become fashionable to connect with old things, old retro gaming consoles are in demand and a lot of people like wearing vintage clothing. It creates a sense of nostalgia that people like. But rather than just liking things from ‘the good old days’, Rosa takes these things and utilises their failures, their flaws, the very reason they were superseded in the first pace to create something new and unique.

I also felt that the ending to the performance was particularly interesting, it crossed the divide between the physical space and the third space. The painter broke up the images on the screens with black paint. This disruption gained cheers from the adult audience members but upset the children who tried to stop him.