By reducing the size of the shapes the attention is now focused on the body copy and the featured image. Each information page has similar features such as the yellow title and shapes framing the images making the whole design intergrate.

The final brochure could have been presented better as I didn’t have time to test print and I had experimented with cutting the fold for a clean fold but ended up peeling the paper off.. I also didn’t realise that I was aligning the blue page with the pink page instead of the orange page when folded came together.

This brochure design represents the Arts&Health Programme, a programme that brings creativity into patients lives for therapeutic, educational and expressive purposes. Using bright colours and confetti-like shapes conveying happiness, positivity and celebration of creativity. The die cut of the shape creates visual interest and sense of surprise in comparison to a standard threefold brochure. All colours and elements are taken from the previous poster design, creating a family of collaterals. The shapes and yellow framed header flowing throughout the pages creating a sense of flow enticing the eyes to move from page to page.

Feral cats are cats that can survive without human contact, they have evolved to live, hunt and breed in the wild. They have evolved to have capabilities to stalk and hunt prey allowing them to adapt to Australia’s harsh climate invading 99.8% of Australia. Data on feral cat numbers are difficult to collect, but total population estimates for Australia range from two million to six million. They are found in all sorts of environments including the deserts, forests, woodlands and grasslands.

Feral cats are an extreme problem in Australia threatening the native wildlife, it is the single biggest threat to native species. As Australia is home to endemic rodents and marsupials and lacks the large placental carnivores found on other large continents, feral cats are taking over the ecosystem. They are carnivores they need a large amount of meat to survive and prefer live prey and they can kill animals their same size, however, mainly eat small native and exotic mammals, birds, lizards and insects. Around 80 endangered and threatened species are at risk from feral cat predation in Australia. Each feral cats kill up to 1000 native animals a year, that’s 3-20 animals each week that are killed. Threatening 81 vulnerable and endangered native animals – 35 bird species; 36 mammal species; 7 reptile species; and 3 amphibian species.

They were introduced in the 17th century, when settlers came to Australia they brought in cats as pets. But by the 1800’s they intentionally introduced them to hunt rabbits and rodents around farmlands, by the 1850’s feral cats had made colonies in the wild.

Feral cats have no connection with aboriginals or their land and therefore are not important in Australia as they are destroying the natural ecosystem. They need to be completely eradicated from Australia in order to restore the natural system and to stop the Aboriginal culture from being affected in the future.

Some aboriginal tribes have been trying to combat the feral cat issue, such as the Pintupi people of the Gibson Desert, who have been hunting feral cats for food since the alien species arrived 100 years ago and to protect their land which is now UNESCO heritage site.

Feral is an artwork depicting the story of feral cats and the impact they have on Australia’s native animals and on the indigenous Australians. A range of Aboriginal painting styles from different regions of Australia is used as feral cats impact all parts of Australia. The figure of a feral cat is portrayed as a ‘god’, the almighty figure dominating and ruling the ecosystem inspired by the Aboriginal Wondjinas. Surrounded lay the bodies of endemic Australian animals hunted by feral cats. The aboriginal symbol for meeting place contains the cat and the animals symbolising the connection of the commonplace for death with native animals and the mutual problem all aboriginal tribes have with the land. The symbol for short journey is leading into the cats depicting the feral cat cutting the animals lives short driving them to extinction. The background image of Feral is a depiction of Australia back in the 17th century during European settlement where the ships arrived and introduced the cats resulting in feral cats. 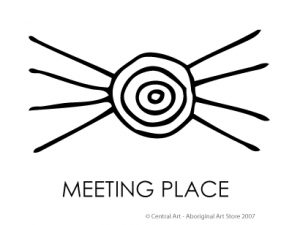 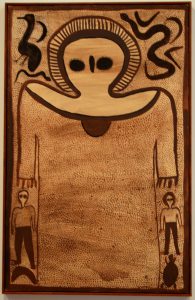 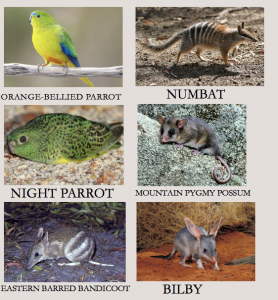 5 species under threat :
– Numbat – there are less than 1000 left
– Central rock rat – also the same with 1000 remaining
– Night parrot – thought to be extinct but was rediscovered
– Mountain pygmy possum – less than 2000 left
– Eastern barred bandicoot – only found in 3 predator-free areas

A painting of the ships harbouring Australia in the 17th century when cats were brought over from Europe and were released to control rodent and rabbits but instead became feral cats.
Integrating two cultures into the image reflects on how not only is it a problem for the Aboriginals but also other Australians as it threatens native Australian animals

Not many artists responding to feral cats, however, I found a couple of images online on illustrators trying to create an impact. I took most of my inspiration from Kaye Kessing’s posters, different styles of Aboriginal art and 18th-century landscape paintings.

Critic and feedback from one on one meeting:

Feedback and critic from peers and tutor: 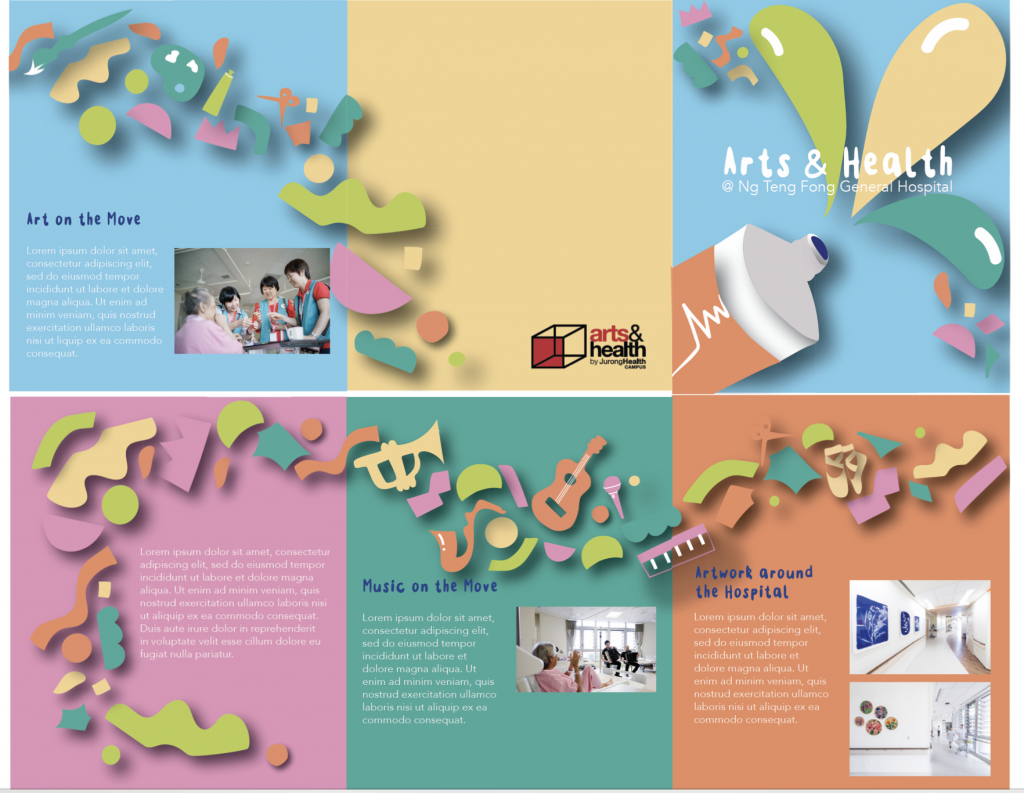 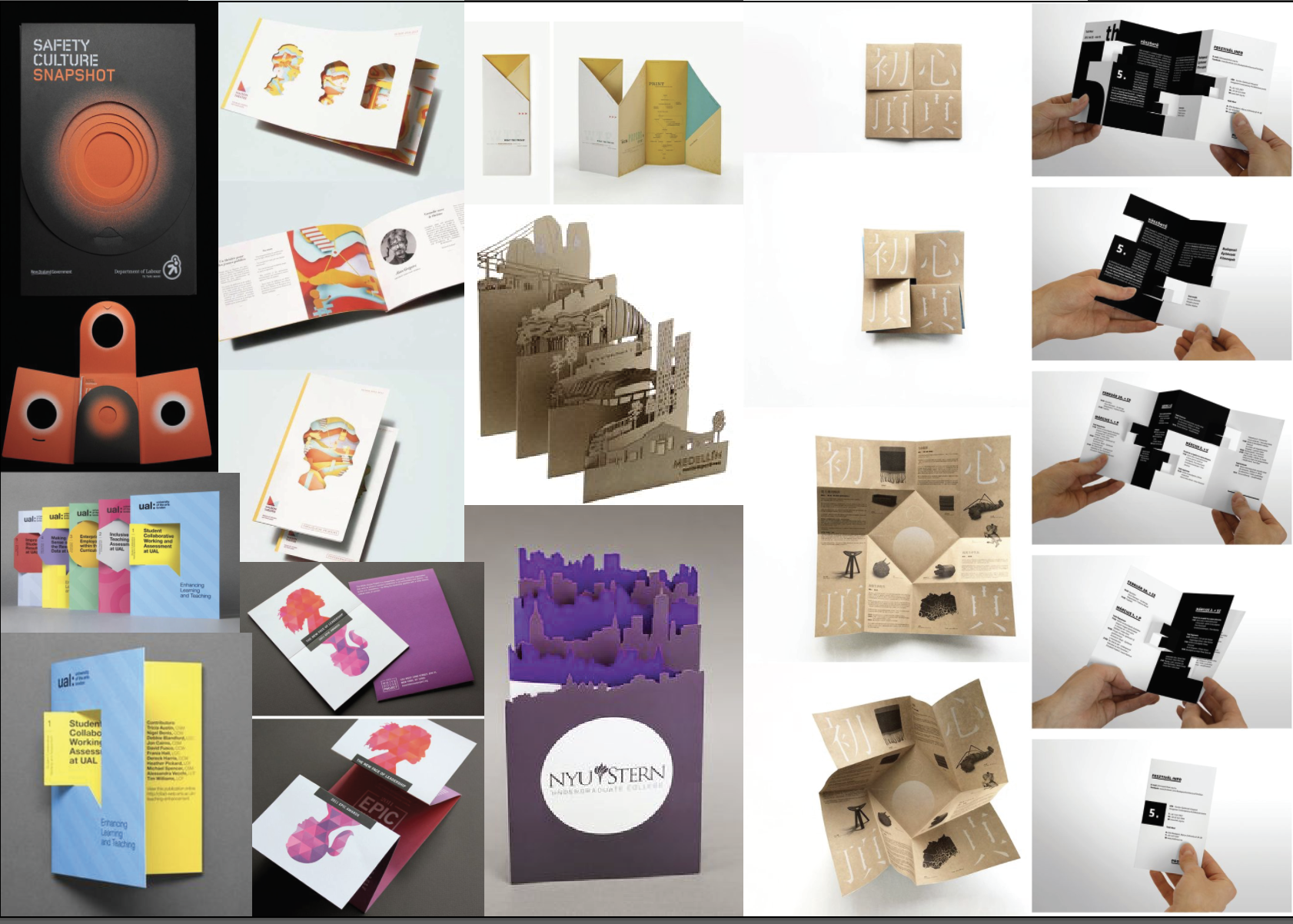 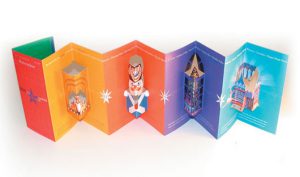 Using an accordion fold this brochure has been cut to create popups, surprising the reader when it is opened. This design is interesting and easily creates a rhythm with the eye. 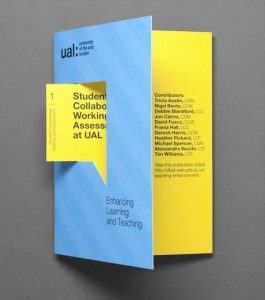 This brochure uses a die cut to highlight an element, the speech bubble. 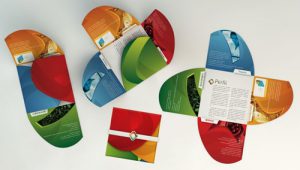 This brochure is folded inwards using 4 panels. It is a fun way to use a brochure, however, it looks difficult to lay the content out effectively. 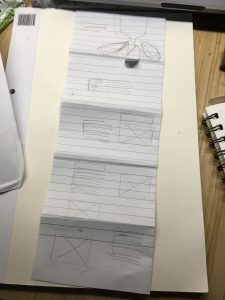 Tried to create a drop down vertical brochure but the layout was pretty difficult to achieve and the user experience would have been awkward to handle.

Using the inspiration from above I tried to create an accordion fold brochure with pop up to create a surprise element. But folding the brochure back was difficult.

Using the trifold I tried to incorporated die cuts into my brochure to make things more interesting for the reader. I also cut out the shape of the paint splatter to create a less uniform brochure.
I also used the shapes across the pages to create visual flow and to establish visual hierarchy. 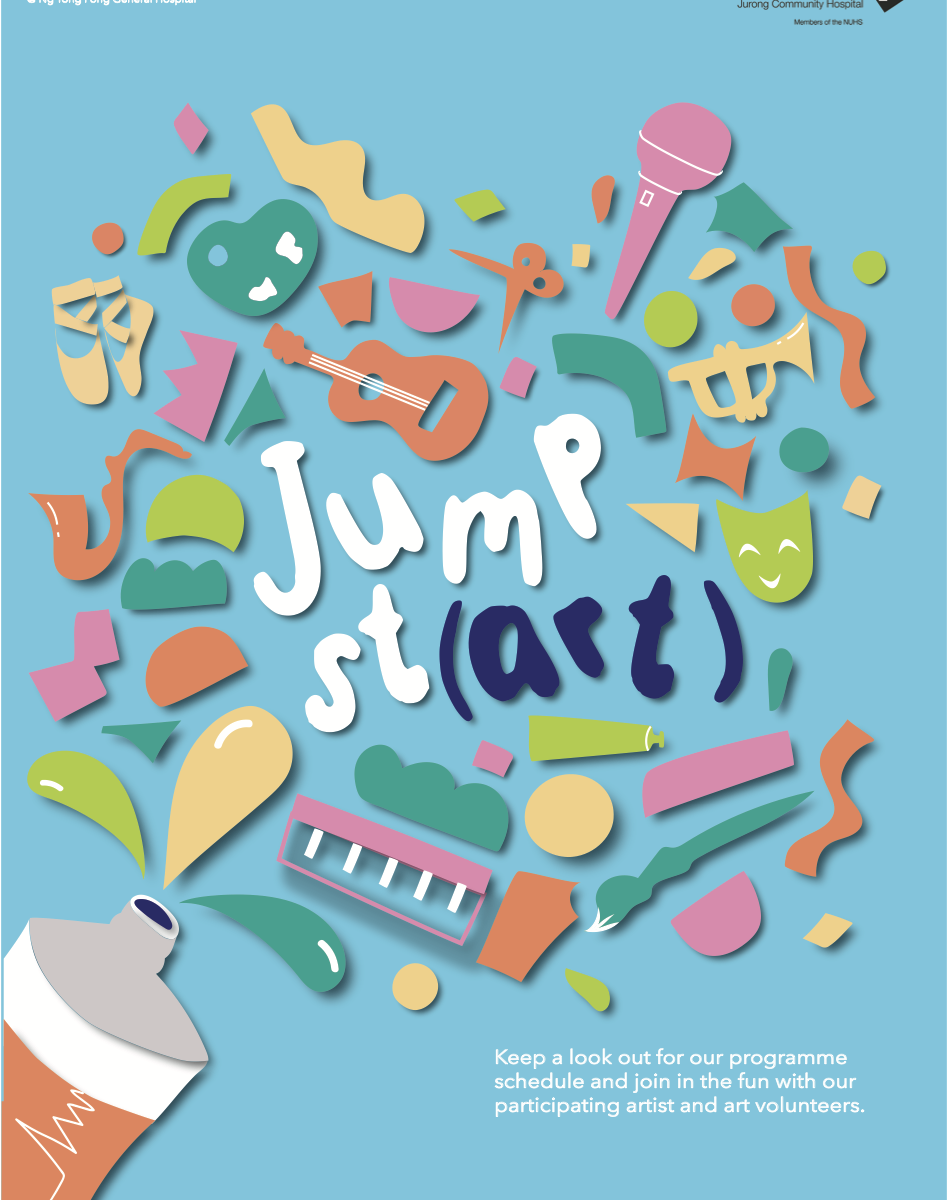 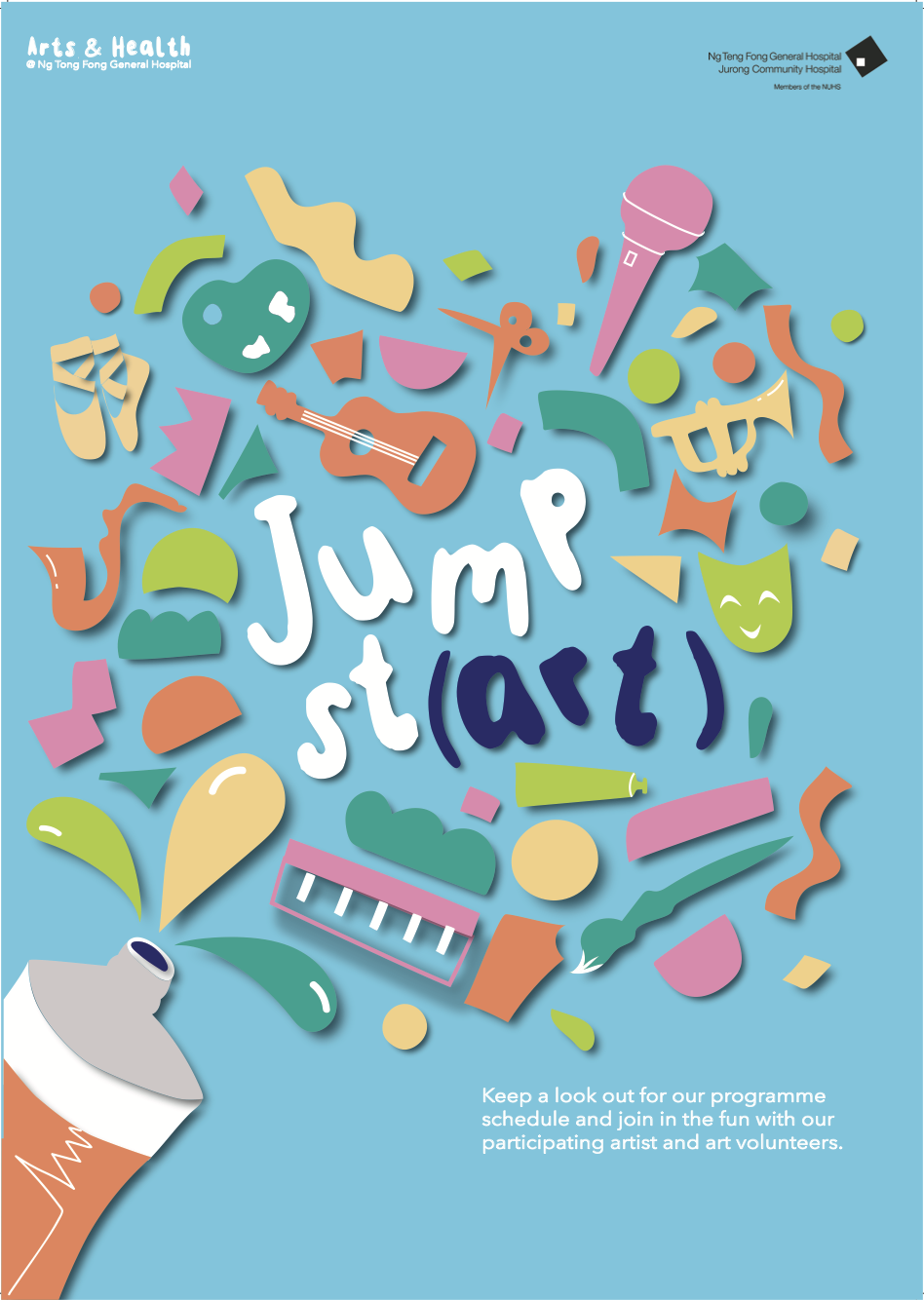 To represent Arts on the Move as a program that brings creativity into patient lives for therapeutic, educational and expressive purposes I have created this energetic poster with the slogan ‘Jumpst(art)’. Jumpst(art) can be interpreted as imparting fresh energy into patients every time they create art through this program. The images in this poster are textured to look like paper cuts and confetti to strengthen the creativity of all the instruments and shapes seen in the confetti. The paint tube is also an analogy for jumpstarting patients – one squeeze and the creativity will flow. The light colour palette and bubbly font are used to create a positive, welcoming and cheerful vibe. 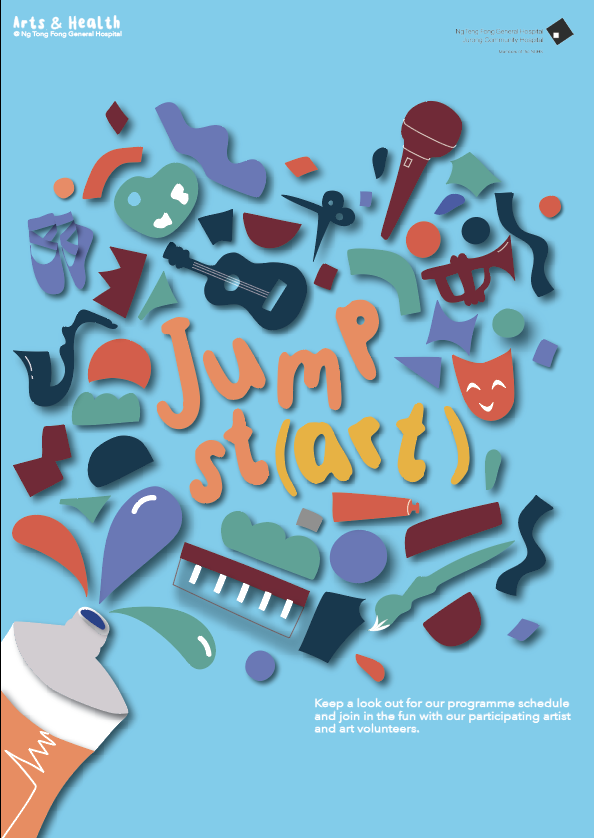 As I only had Monday and Tuesday of the final week to tweak my work as I was travelling up until Sunday, I should have let myself have more time to explore the colour range. 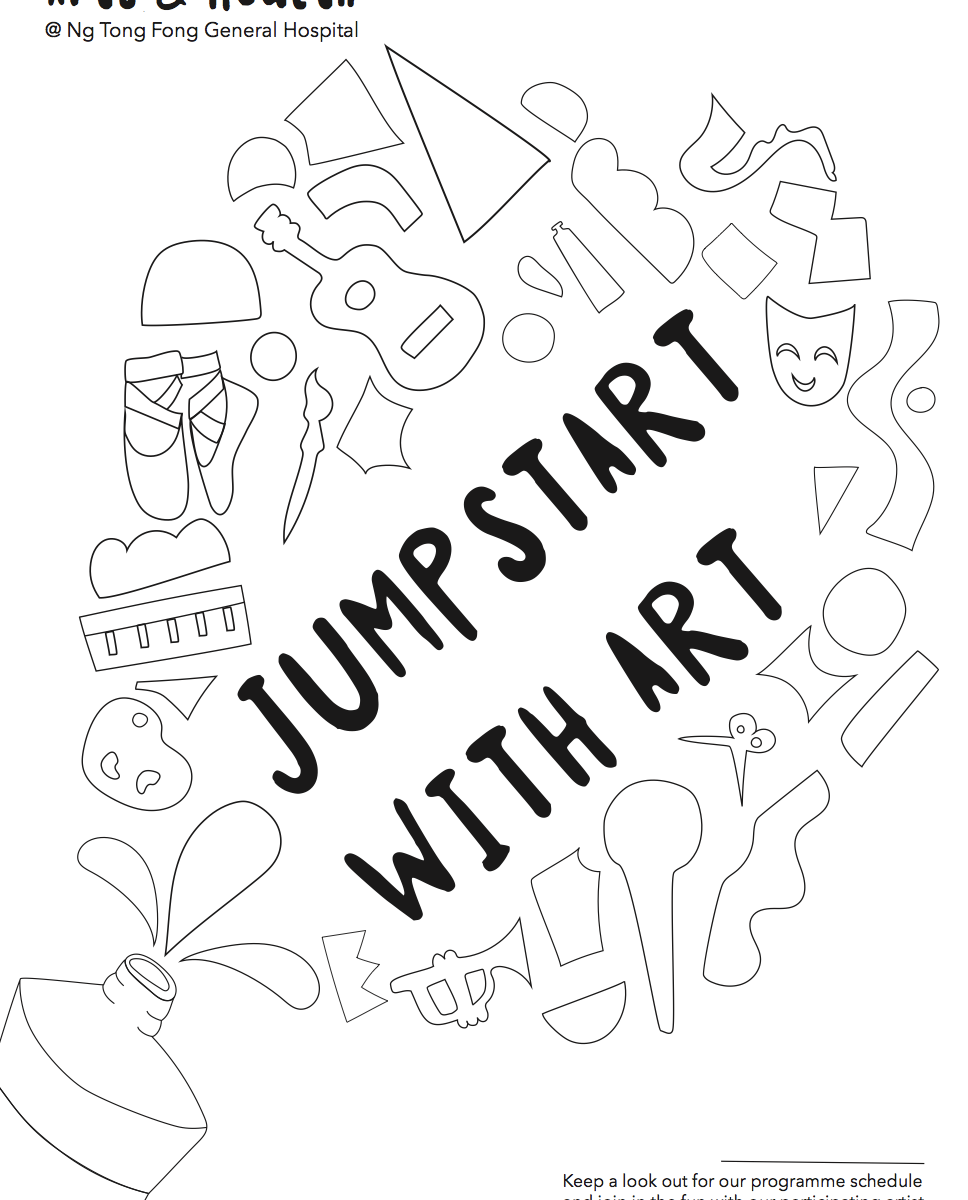