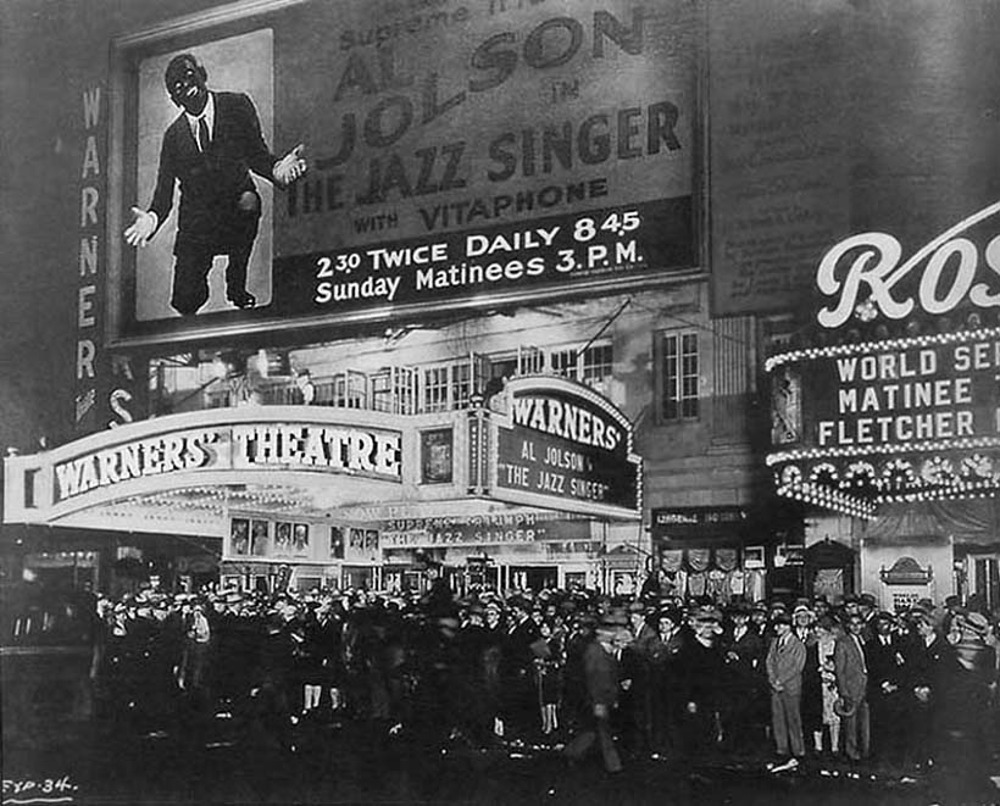 One of the most expressive films in the studios history is definitely The Jazz Singer (1927) by Alan Crosland. Although, it is named as the first talkie in film history it was originally planned as a silent film with six synchronized songs by one of the famous singer of the day: Al Jolson. So, The Jazz singer was supposed to be a silent movie with synchronized music as all the other silent movies were as well.

Thus, the question arises, why the film became so famous and important for film history?

In 1927 several sound systems were known and each studio experimented with synchronized speech and music on one film strip. At least, Warner Brothers did not intend to do the first talkie. Instead, they wanted to create a new genre: The Musical with their Vitaphone technique.
In addition to that, the audience did not know anything about sound-on-disk-systems or the opportunity of sound films and in 1927 there were just approximately less than 100 theatres that were equipped to show those Vitaphone films. So it becomes clear, that The Jazz Singer was not well thought-over, produced and released after many considerations since nothing was prepared for such a sound revolution.
The Times said aptly about The Jazz Singer: “The reason The Jazz Singer did not impress when it was first released was that most people were seeing a different silent vision of the movie.” (http://time.com/3457278/the-jazz-singer/)
What leads to another point: The plot. The combination of the religious heart, the musical and the complete leave out of a love story, which was common and normal at that time. Even the religious heart and the pure love of Al Jolson to his mother were not only something new in the film history but also a reason for the sympathetic and natural presentation of the film.
The two scenes in which Al Jolson improvised dialogue not only made him famous but were the decisive revolutionary progress in the film industry towards the sound film.
It says, that there were massive reactions with the audience who burst into standing ovations after those dialogue sequences and applause after each song. The directors used different sound techniques in the film like for example the call and response cuts which

can be seen in the scene when Jolson (Jack) was singing to his Mum.

They switched the camera between Jolson and his Mom, who was sitting in the theater audience. This had the effect that the viewers had a sense of simultaneity and simultaneous natural actions during watching the movie.
Warner Brothers created something new. They managed to create one of these unforgettable, surprising and at the same time terrifying revolutionary moments in history. The moment when the audience noticed that the silent film they had expected turned into something completely new, unexpected and spectacular is unique. I think today there would be the same surprised reaction (maybe not that positive), when a “normal” film suddenly turns into a silent or black and white movie just because it’ll be something unexpected and different, a shocking moment.
At least the mixture of both, the few scenes when Al Jolson talks, the synchronized music, the fact that it was the first feature length film and the background score in the tradition of the silent movies made the film so terrific. Precisely because it was not the entire film in which was spoken, the audience was not overwhelmed with so much progress, technology and innovation. The Jazz Singer should be viewed as more than a hybrid or a transitional film to accustom the audience to the future and new movie system.
But also, Al Jolson plays a big role when it comes to the success of the film. Many film critics praised Jolson in the highest tones. Through his spontaneous dialogue, he seemed to be even more appealing and sympathetic to the audience and thus not only the film, but also Al Jolson became the symbol for the first talkie and one of the greatest turning points in film history. He acts very natural in front of the camera and especially in the speaking scenes the sound replaces the exaggerated and unnatural gestures and facial expressions, which gave the viewers the feeling of reality once more.

In summary, it can be said that Warner Brothers have acted rightly at the right time. They have invested a great deal of money and have taken a great risk to create an innovation by chance. The choice of the actors, especially Al Jolson, was a blessing and nothing calculated or intentional. Nevertheless, it was the best way to surprise, shock and inspire the audience at the perfect moment.