1. Where do you usually eat in campus?

4. What do you usually eat and why?

6. Walk me through your eating experience from the minute you decide you have to eat something to actually eating.

7. What is your favorite food around campus?

8. Tell me about your best eating experience in school.

9. Tell me about your most frustrating eating experience in school.

10. Tell me about your most embarrassing eating experience in school.

11. Do you have any dietary preferences?

– We narrowed our focus down to two themes, the social aspect and the environment. Eventually, we chose to focus on the environment as eating alone is not really a problem, as it is a personal choice.

We first conducted an online survey with 34 respondents. 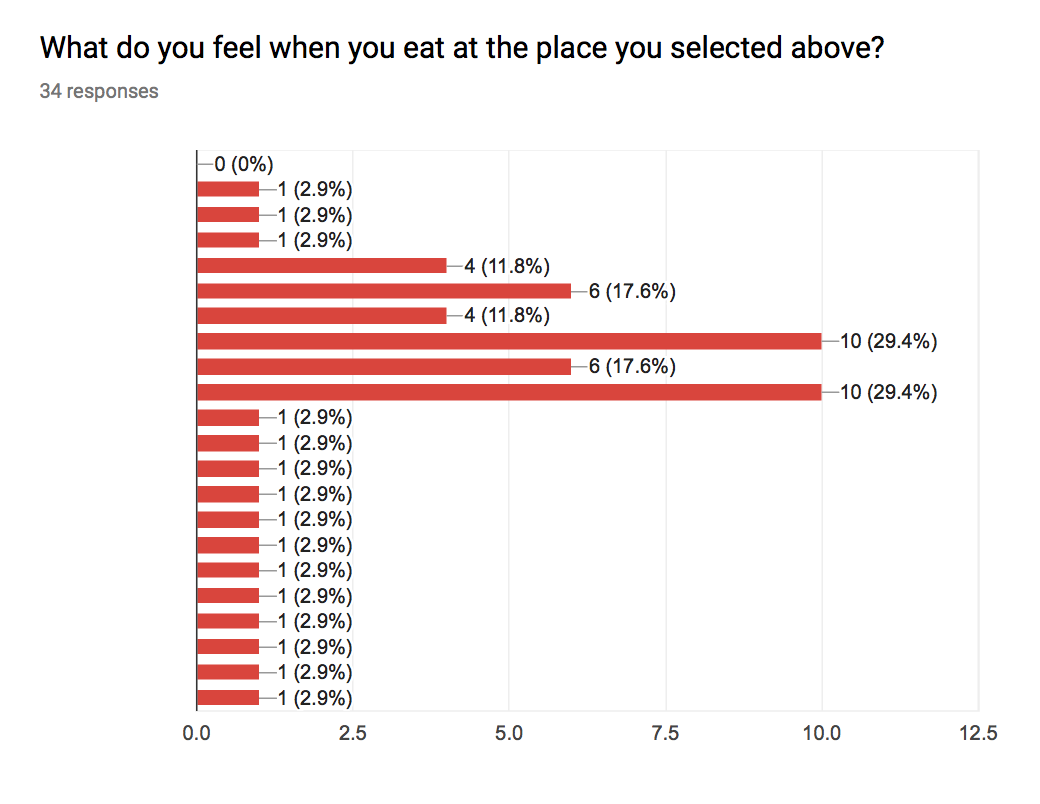 When asked about how they feel when they eat at their worst eating environment, 30% said they felt worried and anxious, 18% felt anger and sadness. 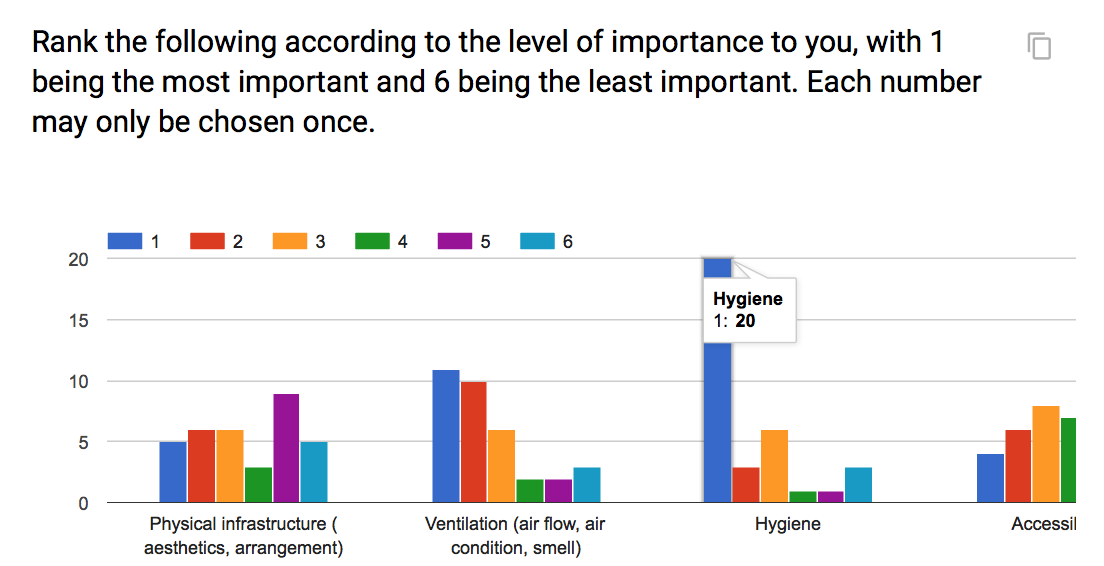 The respondents are not very satisfied with hygiene levels in their chosen environment, with most respondents choosing 4 out of 10 in terms of satisfaction. (The second least satisfied factor).

To further validate the importance of our project focus, we did some secondary research as well.

According to a study conducted in a University in China, the quality of food service (food, service, environment) not only directly relates to students’ health, but also have an impact on students’ mental attitude, happiness, learning effectiveness and influences students’ overall satisfaction with the school (Binge, Xufen, Guoying, Chunyue, & Tingting, 2012).

How might we create a comfortable and worry-free eating environment?

After rounds of discussion, brainstorming and help from our classmates, we came up with 3 ideas to tackle the how might we statement.

An implementation could be a redesign of the North Spine food court, for example. 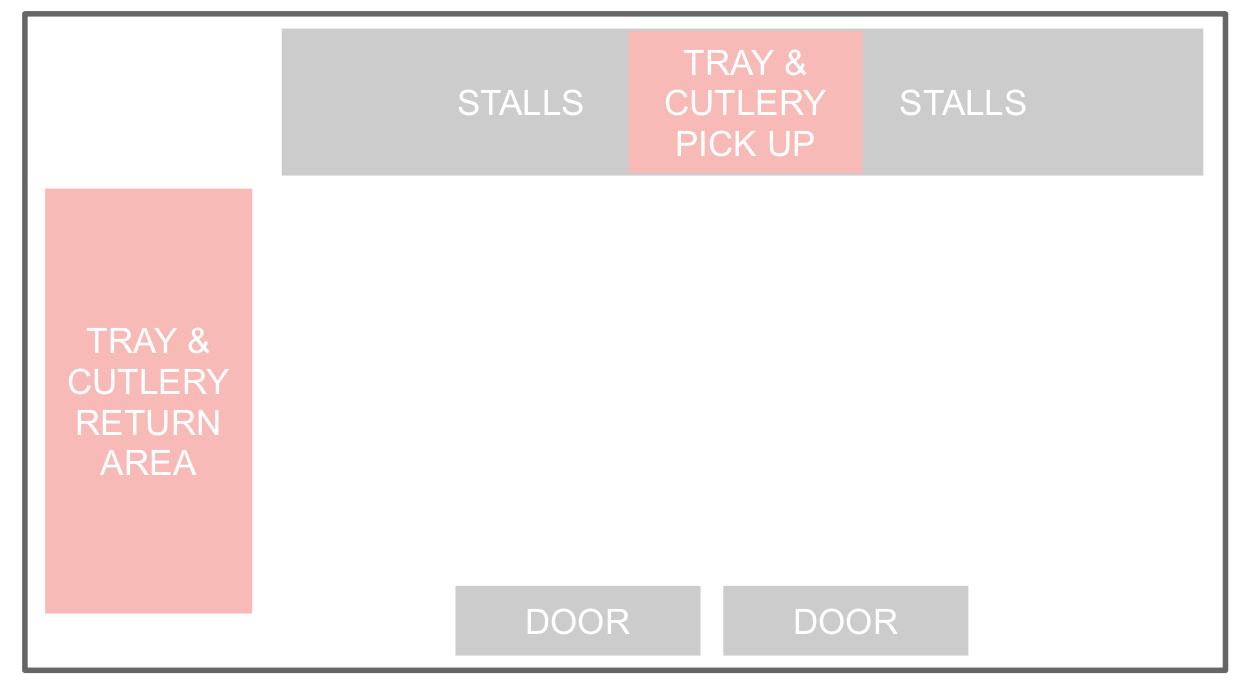 The 4 main change would be:

This is a development of the previous table/tray concept from the first ideation stage. 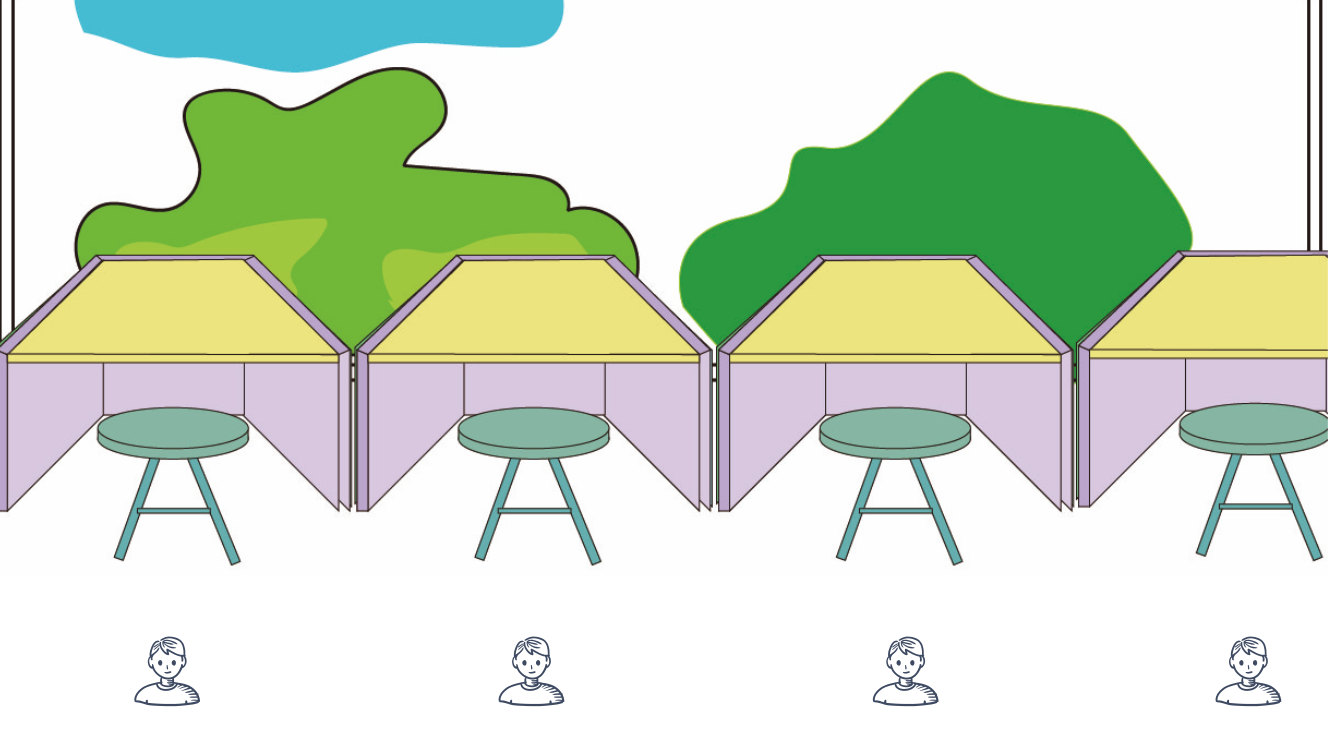 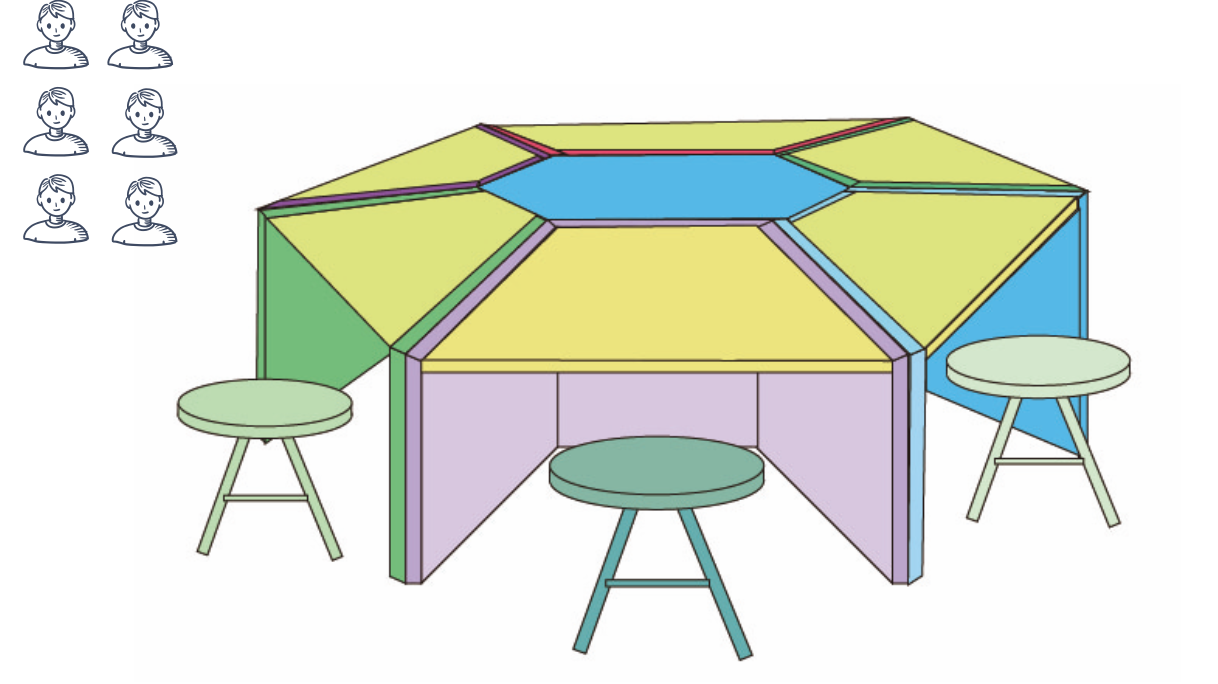 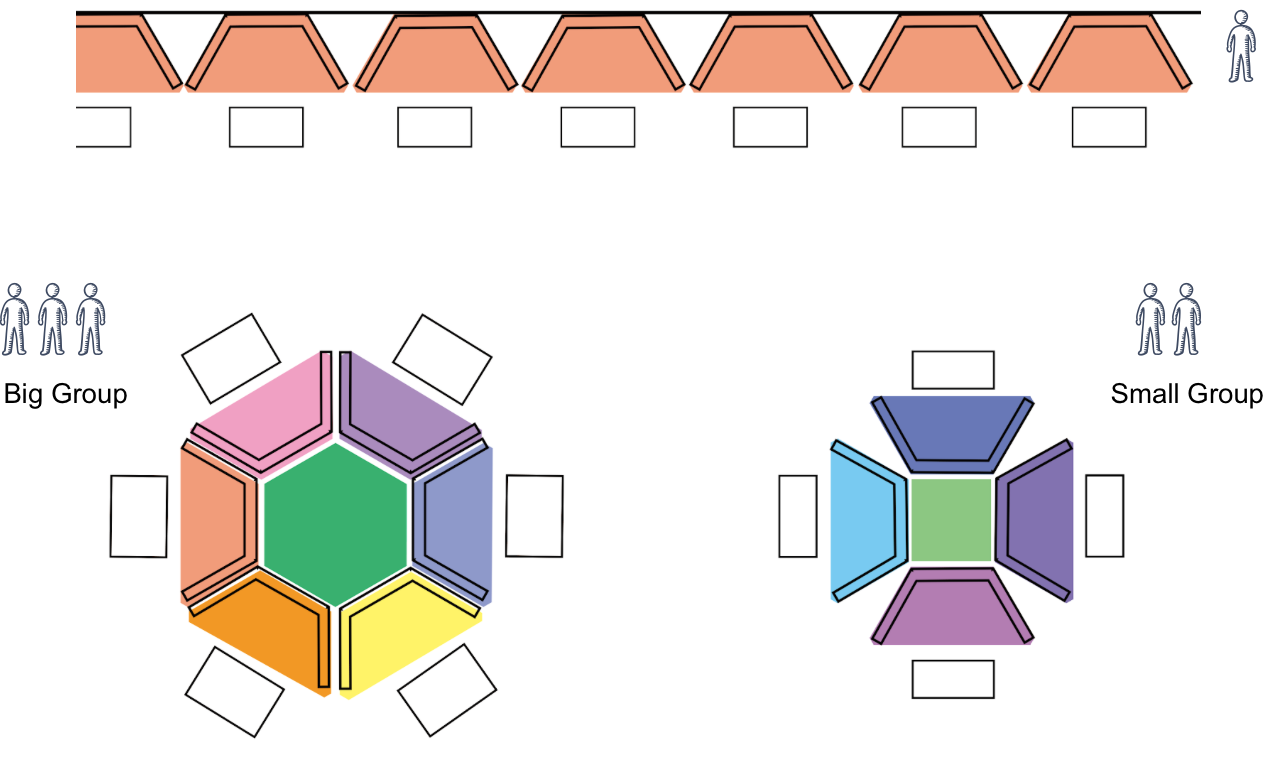 The concept was to have a tray-table system where the table top was replaced by a removable tray. This meant the tables could never be dirty since there no longer would be tables – essentially removing the problem.

Trays will be shaped into a trapezium to form different seating arrangements. Additionally, a centralized tray and cutlery pickup stations could be implemented where trays and cutlery are stainless-steel and can be sanitized.

Problem: Culture and responsibility of cleaning up does not currently exist

Our solution to this problem is to create a culture where patrons are responsible for cleaning the table after themselves.

We thought we could do this campaign through the concept of “paying it forward”.

In order to incentivize patrons to clean up for the next user, we could
(1) recognize these responsible users
(2) reward responsible users with coupons that could be redeemed for drinks at the canteen.

We decided to go with idea 3, because the physical space could be changed, but without the changing of mindsets, these physical spaces have a chance of remaining dirty nonetheless. What we needed was to change the mindsets of the users, which could be tackled by idea 3.

During this stage, we designed signs, a campaign poster, and a plan for testing 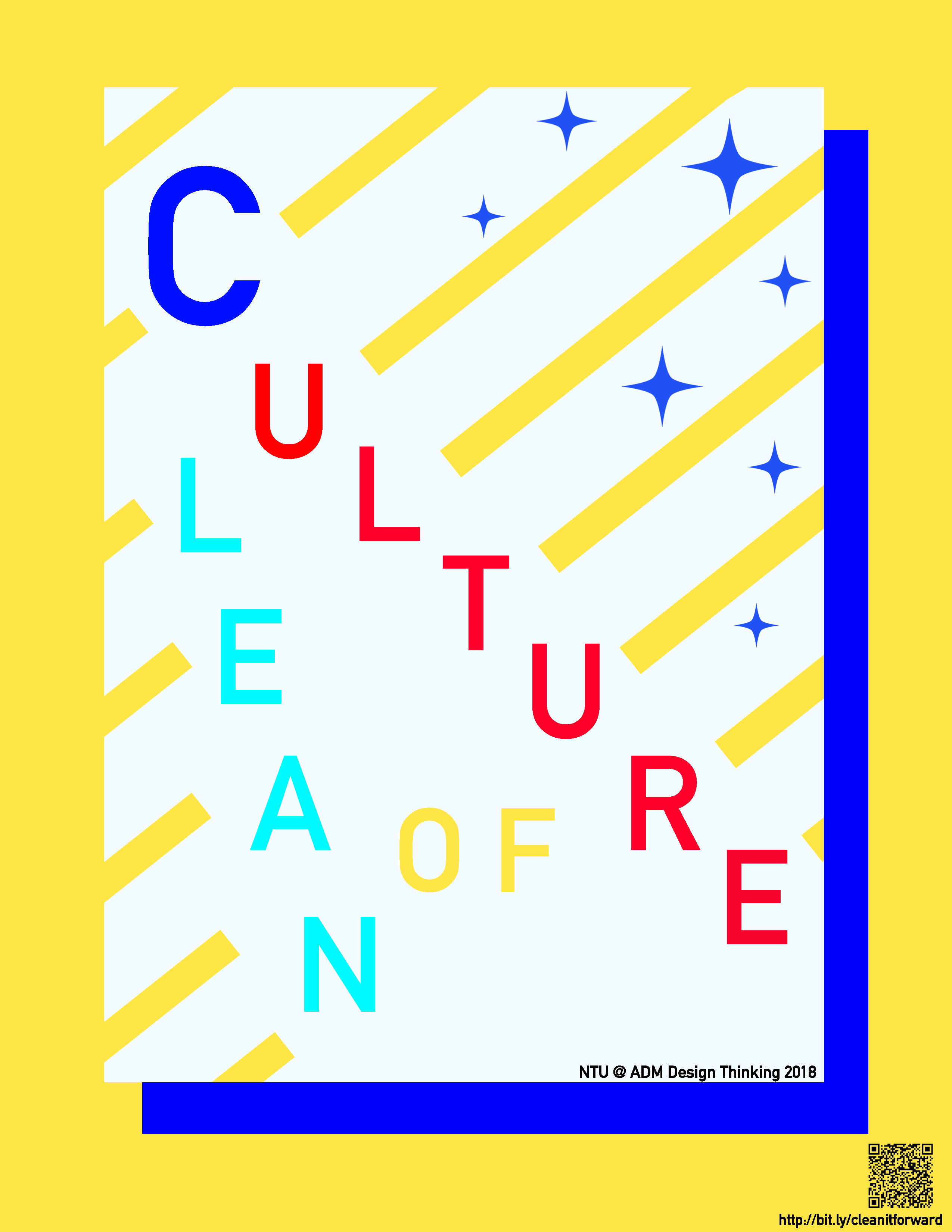 As a user approaches the table, she sees A5 table signs.
The sign encourages and prompts her to clean up after she is done.

There are directions on where she can get cleaning materials.

She gets her food, eats, and then looks for a table with a balloon.
She walks over and grabs a cloth to clean up her table, keeping the table clean for the next person.
She writes her name.
Then, she returns her tray.

The front side of the A5 table sign aims to encourage patrons to clean up after their meal. We came up with two different approaches: First, playing on the concept of karma. Second, making the user interact with the ‘table’ through the WhatsApp chat. The back side of the A5 table sign aims to communicate the purpose of the campaign and the instructions on how to get the cleaning supplies. 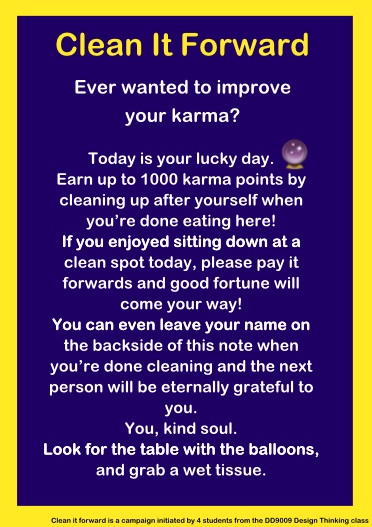 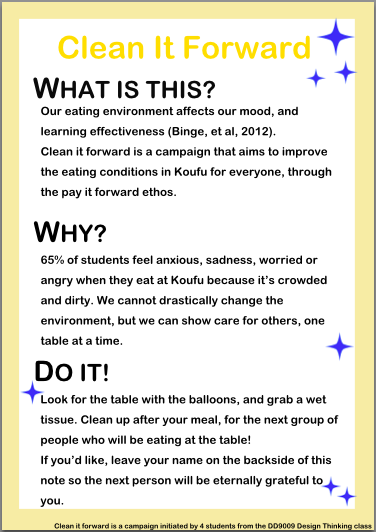 We moved into prototype 2. We felt we had to understand our users better.

We came up with the following possible reasons as to why they choose not to:

Thus our mission is to change the second type of person to the first.

We also created personas to categorize the main audiences for our campaign.

We then asked ourselves two questions:

Q1. Assuming that our target audience is greedy and only does things ultimately for their own benefit. How can we make the connection between doing this action of cleaning and self-benefit? How can we make our campaign appeal to our audiences such that they will participate? 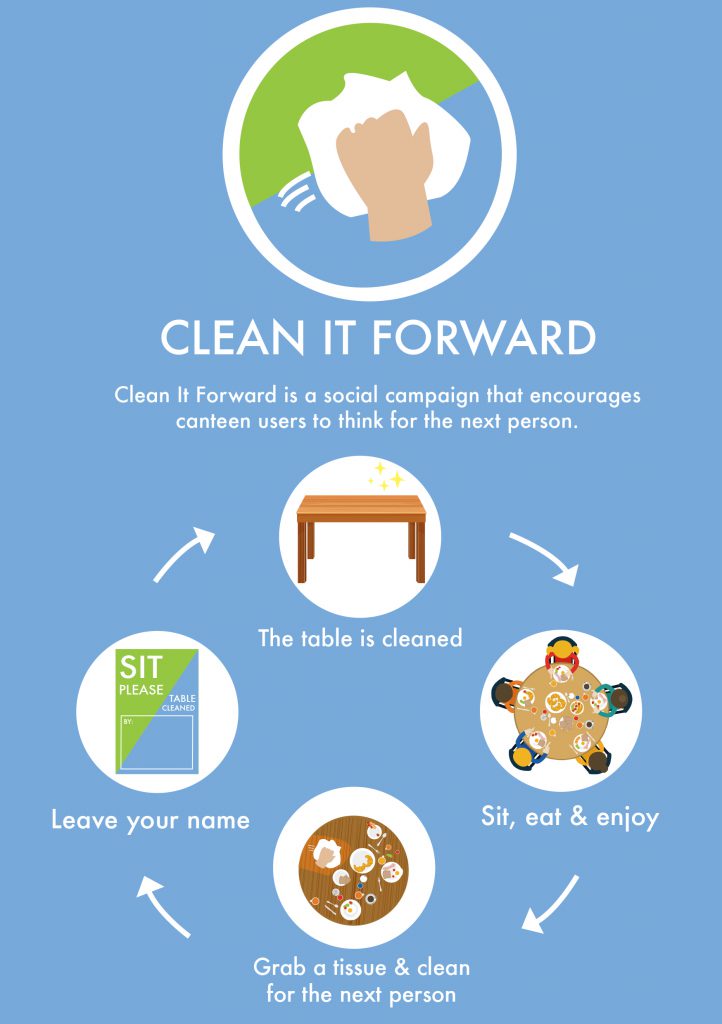 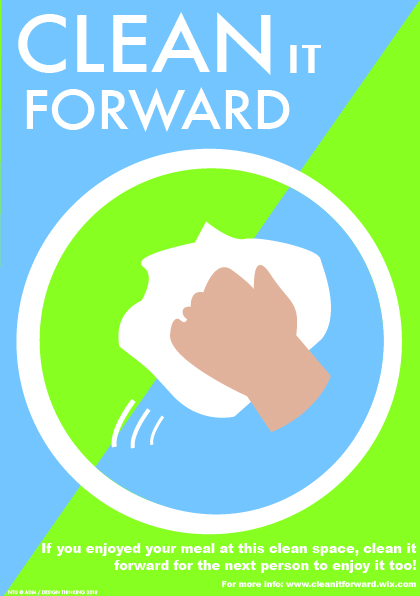 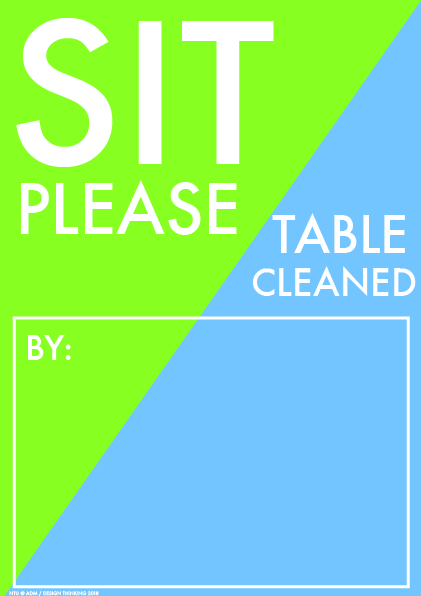 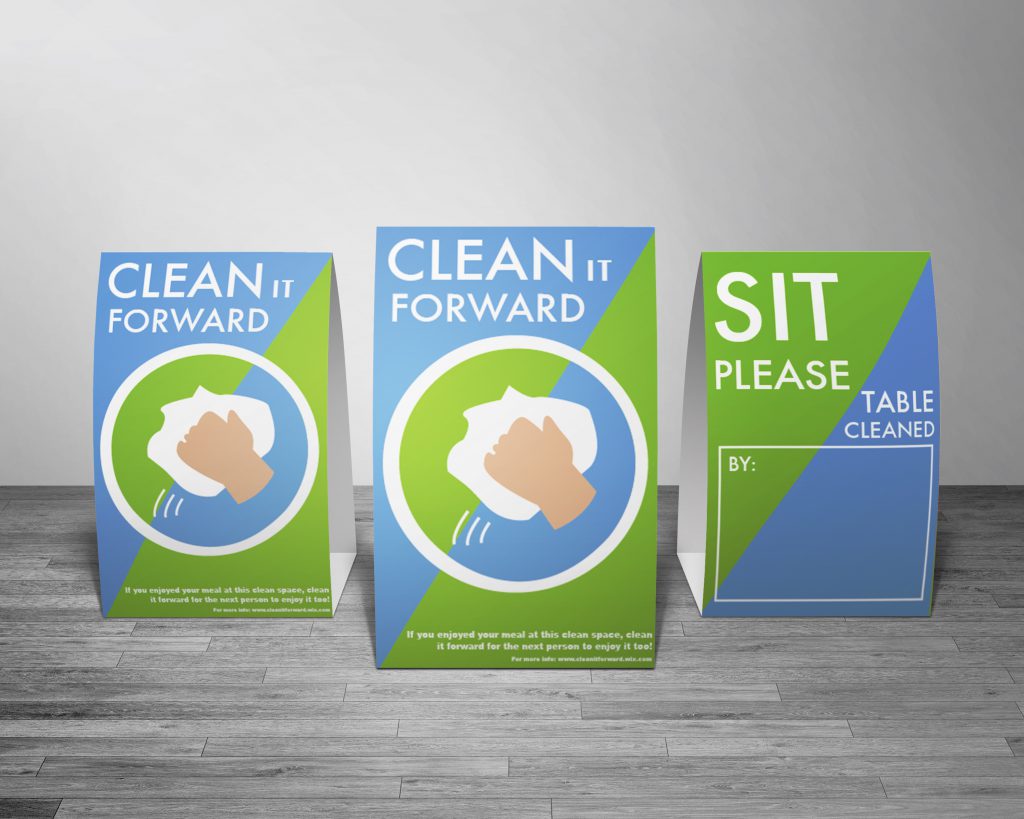 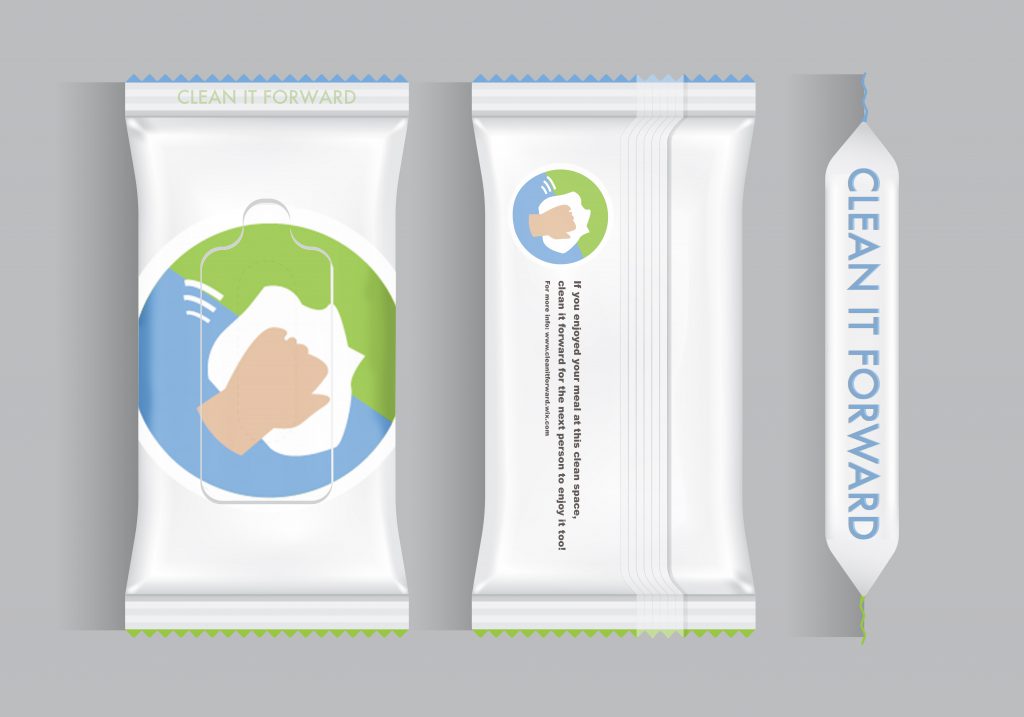 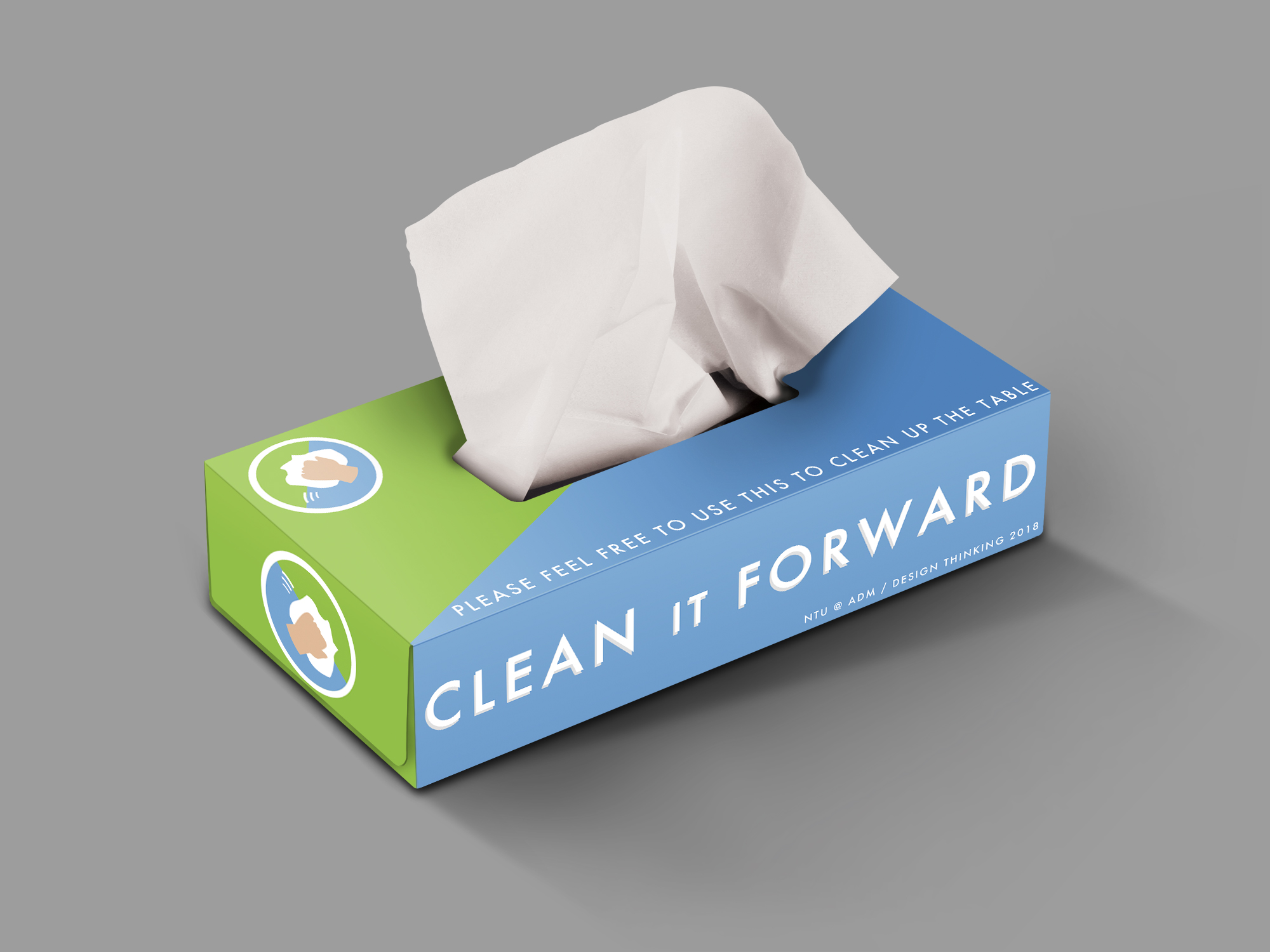 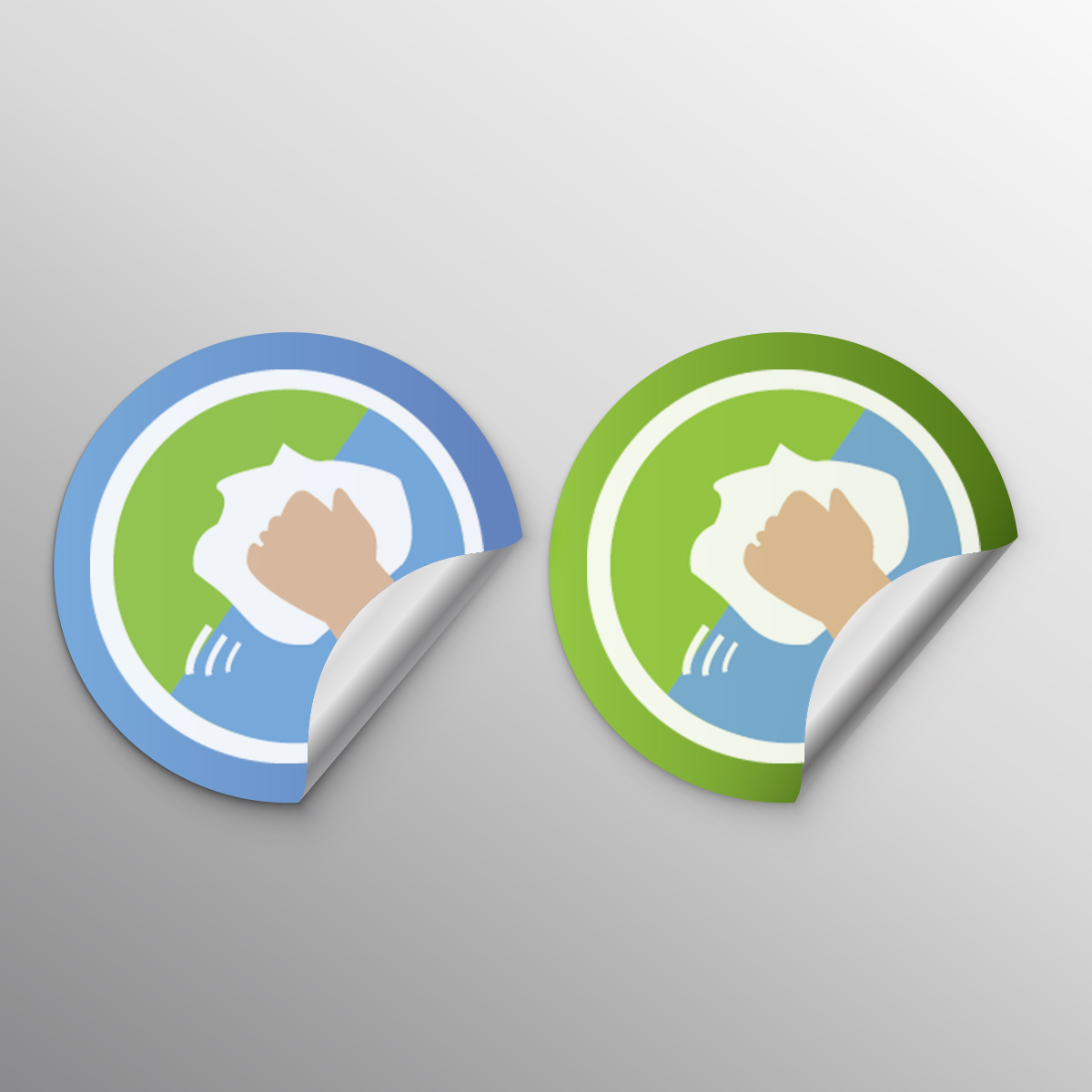 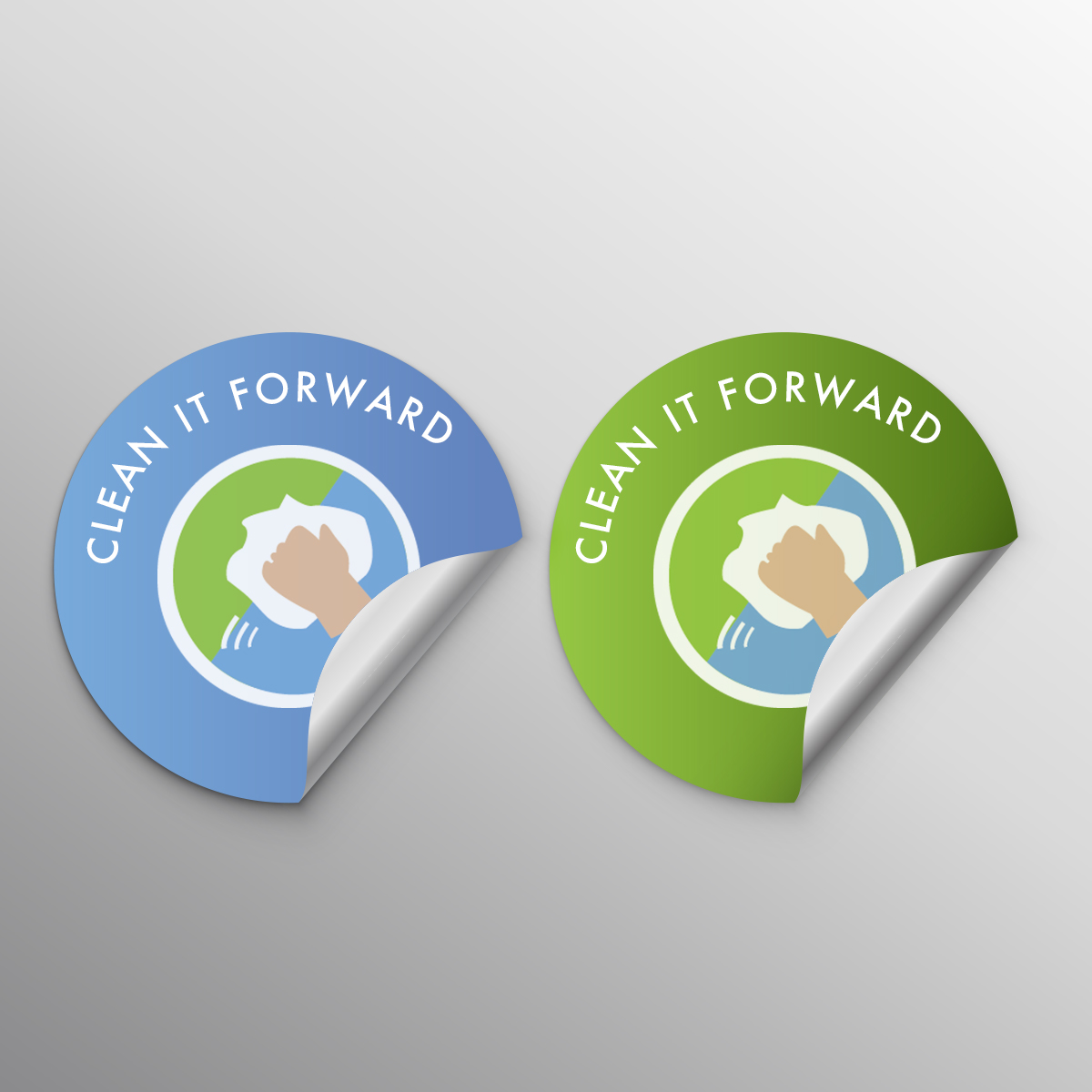 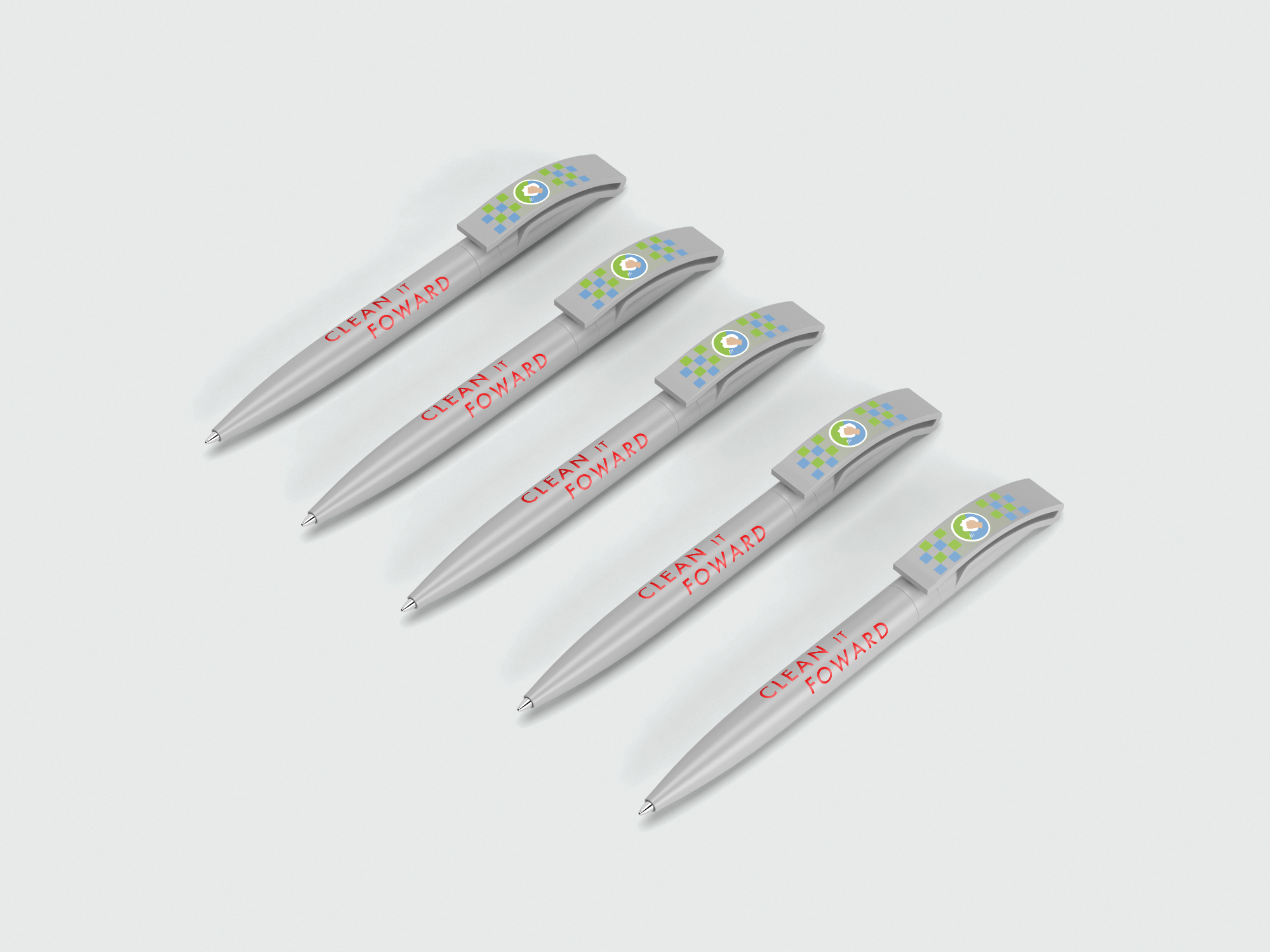 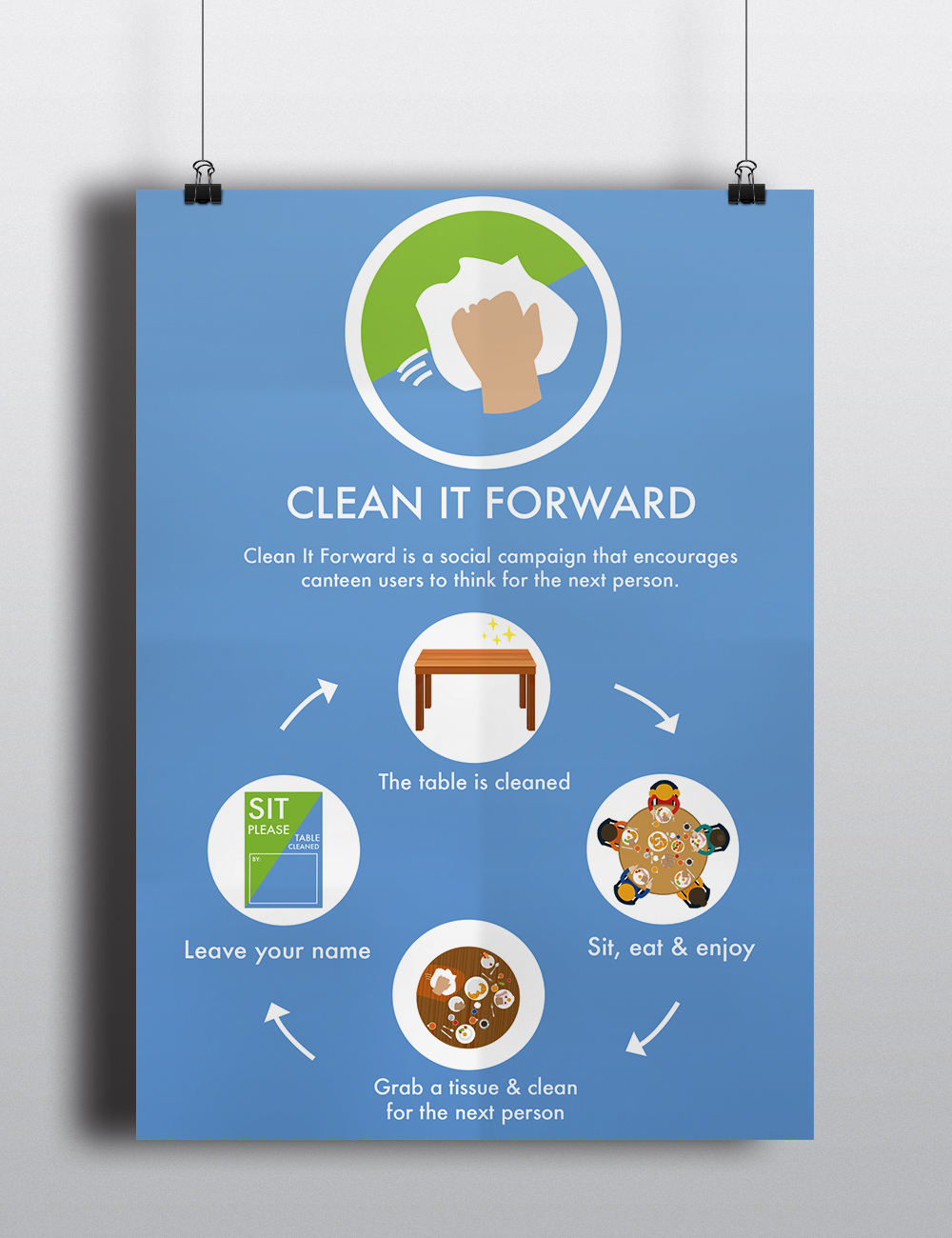