Through attending this online symposium at the first and second day, I would like to pick up some works and views that catch my attention.

Dissolved in Station House Opera in 2014

Through the interview with Julian Maynard Smith, the director of Station House Opera, he wants to show that this space is no a theater, although he specializes in performance. He also mentioned that he was interested in architecture recently, so space is important to him. What’s more, he also made a point about “flux,” discussed in the keynote presented by Maria Chatzichristodoulou; “ we need to think about space outside particular rooms, it’s a sort of flux action.” Actually, I cannot fully understand the interpretation of flux from Maria, but introspecting the idea from Smith, I consider that flux is a fluid and endless statement that flows between real and virtual world. And the work “Dissolved” presented in Station House Opera in 2014, he used two-way video link, the idea like Hole in Space and Telematic Dreaming, connecting participants in London and Berlin to interact with others’ images in full-body size in sync. More impressed is the concept of the identity, he said,

“when your face is close to somebody else, it looks like either of you, it’s third character and has its own identity.”

How participants think of themselves in this blended image and how they separated themselves from this image to think of “the other.” I think this is a quite interesting and exciting experience flowing between the subject and the object!

When talking about the latency issue in the roundtable discussion, it reversed my view of the latency, which I regarded as a “noise.” The latency is unpredictable, but participants can prepare mentally because it is the feature of this environment that we must accept it and embed it in the performance. The latency could be an element for the performance! In Entanglement, there are seven performers busy keeping an eye on others’ action, following the instruction of the “script,” and paying attention to what happened in the chat room. They were doing something deliberately to create the atmosphere where there is no seasonable or logic arrangement of dialogue and visuals. In the end of discussion, Annie Abrahams concluded,

“without speaking, without viewing, how to connect with others? It’s feeling.”

Actually, my first impression on this performance is blank and meaningless when I just focused on their physical images and sounds. However, when I took a look on the conversation between others’ audience, what they were talking about was atmosphere or their feeling. I started to focus on my own feeling and found out there is a wave in my mind. Sometimes I felt calm, but sometimes I felt nervous. I think participants who expressed their feeling in the chat room also performed in this work. After appreciating and realizing this performance, I consider Abrahams an experimenter instead of a performer, because she mentioned that audience is more important the artists and performers. She makes experiments to realize people and to stimulate people to focus on themselves physically and mentally.

It is not just an online game, but it’s a life transmission, a game about relation. In the documentary video, the most impressing scene is the runner hiding or taking a break on others’ space like cars. This action symbolizes building the relationship between participants online and people on the street, and it also means participants build trust on strangers in the same city. Although participants are in the online world, they build an authentic connection with people in the real world through the ambassador of runner. I like the idea given by Matt Adams,

“It’s easy to learn, quick to share, but also easy to lose if you don’t concentrate on the game.”

It makes me come up with the point, if people are not building relation, keeping in touch with others or their communities, does it also mean that people might easily disappear or be forgotten in this world? If people don’t concentrate on their life and get together well with others in their society, do they protect themselves in danger? I don’t know whether or not the artists are intent to deliver this idea, but it could lead a different route to explore. 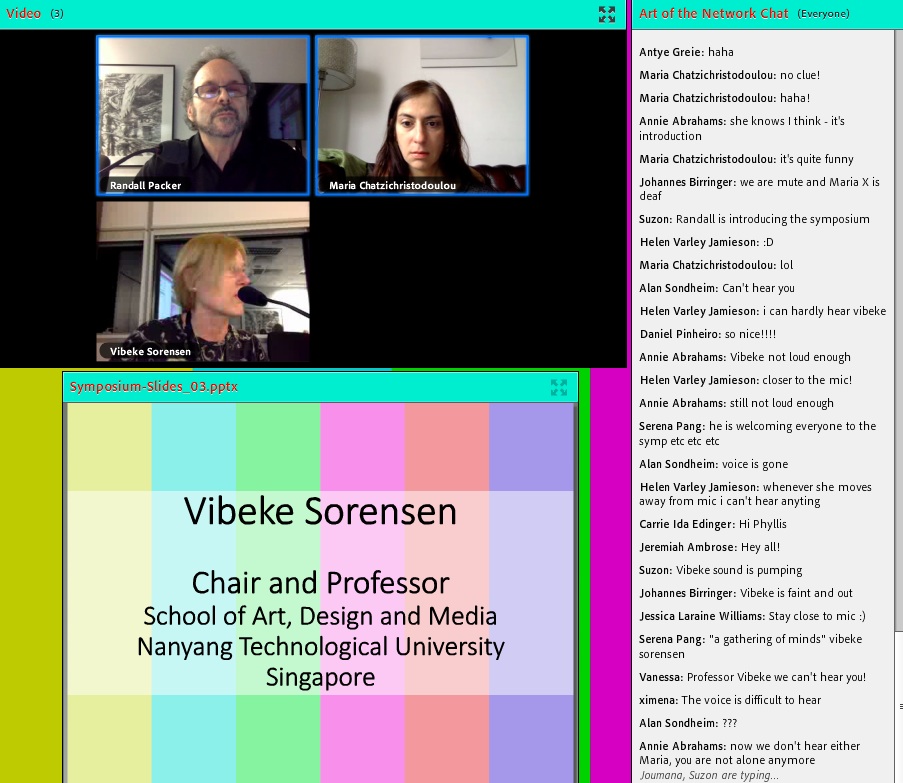 At the beginning in the first day, when Prof. Sorensen, the Chair in ADM, was making an introduction, some people responded the sound issue in the chat room. It makes me start to think about how important problems can be responded or solved timely by presenters? It’s a technological issue, but I think it’s worthy of discussing this trivial but significant problems. Here is my idea, or more specific, it’s my imagination! In my opinion, the interface of participants can be inserted a button about the technical issue that there is a drop-down list, such as the serious latency or disappearance of sounds’ or images’ problems. If it exceeds to certain amount of participants pressing the same problems, the desktop of the presenters would sound an alarm to disrupt presenters. Although it seems to be impolite to presenters, it can enhance the quality of the communication and collaboration in the third space.

Above this picture, it presents the collaboration in the chat room and really impresses me with the share of intellectual. When I viewed the topic “The promise of internationalism,” it also confused me of the definition of internationalism. It’s difficult for presenters to respond questions through making an oral presentation, but other participants involved in this issue and “co-“created this project (this presentation), just like the core concept of new media art, there is no boundary between senders and receivers, between performers and audience, everyone inside the spectacle is producer. Sometimes, there is more lively, energetic and creative in the chat room, even though text is only mediation available here. And this also could happen in the performance, Entanglement, audience sharing their feeling and idea in the chat room.

Before taking this new media history and theory, I consider the use of advanced technology in art work is too deliberate and just for innovation but nothing meaningful. Nevertheless, after the overview of the history and the realization of the significant concept of new media, I think what Steve Dixon, President of LASALLE College of the Arts,  said in the online symposium can represent my view.

“Telematics is a tool to find new relationships between things already exist in,” said Steve Dixon.

One Reply to “After Art of the Networked Practice(2018)”