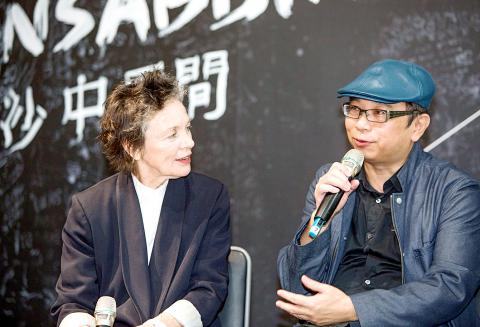 Laurie Anderson is known primarily for her multimedia presentations, she has cast herself in roles as varied as visual artist, composer, poet, photographer, filmmaker, electronics whiz, vocalist, and instrumentalist. In 2002, Anderson was appointed the first artist-in-residence of NASA, which inspired her performance piece The End of the Moon. Her performance ranges from simple spoken word performances to elaborate multimedia events. She also has published six books, produced numerous videos, films, radio pieces and original scores for dance and film.

Initially trained in violin and sculpting, Anderson pursued a variety of performance art projects in New York during the 1970s, focusing particularly on language, technology, and visual imagery. She became more widely known outside the art world when her single  O Superman  reached number two on the UK pop charts in 1981.

The project, her first collaboration with Huang, is Puppet Motel in 1995. That’s an interactive CD-ROM, and in this fictional space, there are thirty unique rooms in hotel scene. Anderson infused with stories and music to make readers interact with the mechanism through a cursor.

In a space filled with the graffiti by chalks, participants in head-mounted device, holding controllers and sitting at the chair explore and fly within “the other” world in companion with the artist’s indelible voice on audio serves as the storyteller. There are 8 rooms in this virtual world: The Cloud Room features a galaxy of text like spinning nebula; The Anagram Room, the movements of participants would reflect on the move of two heads on the wall, which are talking to them; The Dog Room represents the artist’s deep missing to her dead dog; The Water Room features a surreal scene taking place in a flooded, ceramic-tiled room; The Sound Room, voices of participants talking and singing will be converted into sculptures, and participants with controllers can strike them to listen their own sound or others who attended before; The Dance Room, surrounded by small people, is characterized by the mysterious story to make participants more soaked in; The Writing Room allows words to flow out of physical gestures; And The Tree Room allows participants to fly around an enormous tree with words leafs that are telling several stories.

The aim of this work is the exploration in the memory space where participants are able to fly without physical constraints. In Laurie Anderson’s interview, she said what she does is about losing your body and making an experience that “frees” you to look at any position. That’s also how it works in Virtual Reality, making people released from the subjectivity of body and experiencing the world at any aspect through senses. In my opinion, La Camera Insabiatta is influenced by some of her previous projects, such as Forty-Nine Days In the Bardo and The Waters Reglitterized. In 2005, The Waters Reglitterized, opened at the Sean Kelly Gallery in New York City. This work, created in the process of re-experiencing or re-working Anderson’s dreams while awake, uses the language of dreams to investigate the dream itself. The piece includes drawings, prints, and high-definition video. And, this work took its title from an essay on painting by Henry Miller written for his friend Emil Schnellock in 1949. Miller wrote, “Before falling to sleep last night I ordered my subconscious mind to remember, on waking, the last thought in my head — and it worked.” And for Anderson, dreams are “more than just pictures but portrayals of physical sensations and emotions.” That’s why there are lots of drawings chosen in the work but also her lots of works, which have an almost fluid quality and feature warm, saturated colors. In La Camera Insabiatta, it also emphasizes on the awakening consciousness, but ignores the physical present. And both of these works reproduce the experience that could not happen in the physical world, one is the dream world and the other is the human’s memory world, like the state of dreaming.

In La Camera Insabiatta, Anderson makes participants forget the physical self, and fly in the dream or the memory to feel the different statement of life, the death, in the virtual world. When it comes to the topic, the death issue, it’s worthy of discussing about the projection of the personal life experience of artists in their work. During the production of this project, both artists were just experiencing the death of their beloved family. Therefore, they wanted to explore the experience of death with the advanced technology, and combined the religious concept of “Bardo,” which is the period about first 49 days after people’s death, a transitional state between death and rebirth. In this period, these dead people still own their senses and feelings, but without the physical body, and their memory are disappearing gradually. In my view, the other exhibition also has an impact on this work, Forty-Nine Days In the Bardo, opened at the Fabric Workshop and Museum in Philadelphia in 2011, exploring the themes of love and death, the many levels of dreaming, and illusion. The installations include texts as well as drawings, sculptures, projections, and sound are made from materials including mud, foil, iron, chalk, and ashes. Both of two works are inspired by the death of her dog, Lolabelle, an intense discussion on loss as well as the deep spiritual connection between pets and their owners.

Among Anderson’s works, there is the similar concept with Lucid Dreams, a dream during which the dreamer is aware of dreaming. During lucid dreaming, the dreamer may be able to exert some degree of control over the dream characters, narrative, and environment. From the aspect of epistemology introduced by Paul Tholey, there are seven conditions, awareness of the dream state, awareness of the capacity to make decisions, awareness of memory function, awareness of self, awareness of the dream environment, awareness of the meaning of the dream, and awareness of concentration and focus. In La Camera Insabiatta, participants know what they see and heard is not from the real world, just like the state of dreaming, and they are aware of it. In the virtual space, participants can decide what is their next step and how to interact with objects by themselves. And they can “feel” themselves, instead of seeing their own body or any physical present in the virtual world and seek for the personal meaning of this work for themselves, not just following the guidelines to operate the mission. With the help of VR device, participant are more immersed in this virtual world than the sole projection.

Besides, I would like to mention Osmose by Char Davies here. They both utilize the techniques of VR to help participants “fly” or “swim” in the virtual world, to “free” themselves form the limits of body. And both of them have different kinds of space in the virtual world, with regard to nature. In Osmose, Davis presents the nature scene, such as forest, cloud, pond and so on, but also code and text about the technological issue. In La Camera Insabiatta, Anderson talks about the nature of the death and also makes use of text as material but on the different purpose, for the representation of memory here. When it comes to the controlling devices, both of them use of a head mounted display, and with the help of hand-held controllers in La Camera Insabiatta; however, Osmose depends on the body’s most essential living act, the breathing, to navigate and to make participants feel themselves, a particular state-of-being within the virtual world. Regarding to visual presentation, the visual aesthetic of Osmose is semi-representational, consisting of semi-transparent textures and flowing particles instead of the hard-edged realism. And in La Camera Insabiatta, it transcends the state of the medium, the abstract sound transferring into the concrete sculpture.

When it comes to the importance of the techniques of VR, Huang mentioned, VR is a tool that can efficiently and greatly deliver the cogitation, sensation or affection of the creator to the audience, just like so-called “empathy machine” by Chris Milk in his TED talk. In this work, the artists transformed their life experience, facing with the loss and thinking about the meaning of death, into the work to make participants experience the same and real feeling. What’s more, Huang also predicted that VR could influence people’s perception of themselves in the future. For instance, through the eyes of other creatures, the opposite sex or a different cultural background, VR helps people look at themselves from different aspect. Huang considered it’s the next wave of influence on human beings. Because people can release themselves from their physical present or social norms in the real world, and achieve to truly “fly” and “free” physically, mentally and consciously.