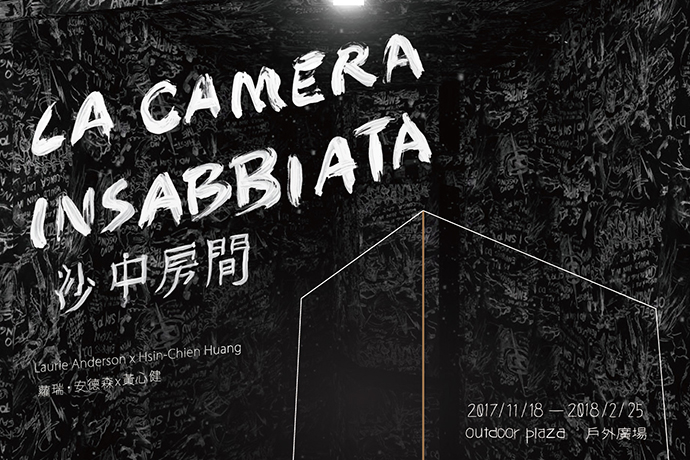 “Your feet say, you are in the room. I feel the floor. But your eyes say, I’m in great dangerous flying and back to fall. You believe your eyes, not your feet.” –Laurie Anderson

In a space filled with the graffiti by chalks, participants in head-mounted device, holding controllers and sitting at the chair explore and fly within “the other” world in companion with the artist’s indelible voice on audio serves as the guide. There are 8 rooms in this virtual world: The Cloud Room features a galaxy of text like spinning nebula; The Anagram Room, the movements of participants would reflect on the move of two heads on the wall, which are talking to them; The Dog Room represents the artist’s deep missing to her dead dog; The Water Room features a surreal scene taking place in a flooded, ceramic-tiled room; The Sound Room, voices of participants talking and singing will be converted into sculptures, and participants with controllers can strike them to listen their own sound or others who attended before; The Dance Room, surrounded by small people, is characterized by the mysterious story to make participants more soaked in; The Writing Room allows words to flow out of physical gestures; And The Tree Room allows participants to fly around an enormous tree with words leafs that are telling several stories.

The aim of this work is the exploration in the memory space where participants are able to fly without physical constraints. In Laurie Anderson’s interview, she said what she does is about losing your body and making an experience that “frees” you to look at any position. That’s also how it works in Virtual Reality, making people released from the subjectivity of body and experiencing the world at any aspect through senses. What’s more, this characteristic of VR matches the core idea of this work, the death issue. During the production of this project, both artists were experiencing the death of their beloved family. Therefore, they wanted to explore the experience of death with the advanced technology, so they combined the religious concept of “Bardo,” which is the period about first 49 days after people’s death, a transitional state between death and rebirth. In this period, these dead people still own their senses and feelings, but without their physical body, and their memory are disappearing gradually. In the introduction video, Huang said,

“The mission of last technology is to help people to think about the most important issues such as live and death in our daily life.”

In my opinion, this work makes an overwhelming demonstration of technology in  arts, making people experience the feelings that never could be explored before, and making anything, including the experience, feelings and emotions, “real” in the virtual space.

The reason to choose “chalk” as a material to present the world, which is like the space of memory in the brain, is that chalk is like memory; words can be removed, but cannot be erased completely and must be remain something on the blackboard. It is the same state with memory; sometimes, people might forget something, but it doesn’t mean that this memory disappears from the consciousness; instead, it hides somewhere in the subconsciousness, and the only difference is whether it’s stronger or weaker memory.

Besides, that’s an interesting perspective from Anderson: she thought chalk has certain tactility, handmade, and it’s opposite of what virtual reality usually looks like, where the world is perfect compare to the chalk room filled with dust and dirt. It’s kind of a savvy means to mixing the real world with the virtual space.

“It’s an isolated experience, not like the film or the concert. You are alone in this world,” said Anderson.

Rather than following the goal-oriented structure in the previous VR project, this VR interactive work focuses on the personal experience. In my view, this method breaks through the entertainment of the VR device, but enhances the level as a mediation to help people to introspect their lives. And Huang mentioned, VR is a tool that can efficiently and greatly deliver the cogitation, sensation or affection of the creator to the audience, just like so-called “empathy machine” by Chris Milk in his TED talk. In this work, the artists transformed their life experience, facing with the loss and thinking about the meaning of death, into the work to make participants experience the same and real feeling. What’s more, Huang also predicted that VR could influence people’s perception of themselves in the future. For instance, through the eyes of other creatures, the opposite sex or a different cultural background, VR helps people look at themselves from different aspect. Huang considered it a next wave of influence on human beings. The potential of technology is not foreseeing, but the domain to be explored by human is expanded continuously and certainly.