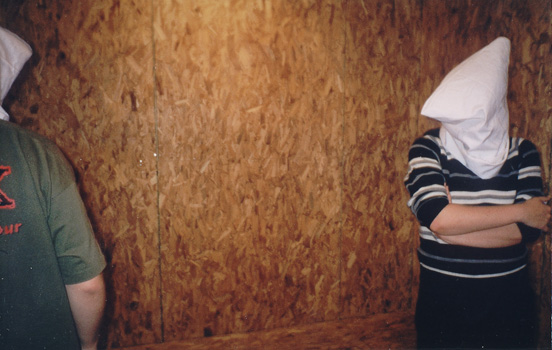 An interactive media art, Kidnap, was represented in 1998 led by Matt Adams in Blast Theory. It explored the social and cultural phenomenon through the application of innovative technology, live performance, media, dramaturgical structure and game in the fluid environment, combining real, virtual and fictional experience. In the official introduction of Kidnap, it highlights the ideas of control and consent, the media, theatre, surveillance and lottery culture in this performance, or called the event.

Control and consent are related to the political issue, about the power or authority. It asked “winners of kidnapped” for giving up control themselves and asked for approval to snatch them in a symbiotic risky way. In the article ‘How to kidnap your audience,’ politics is infused in our behavior, and how we relate to someone who asks us directions is a political act, through that type of inter-relationship, Adams said. Although he revealed some people described their work as apolitical, I agree with Adams’ view from the broad definition. When I take a look on the definition of politics in the dictionary, one of meanings is the art or science concerned with winning and holding control over a government. In my opinion, politics is not just control over a physical government, it also could dominate other people’s minds or behaviors, just what kidnap presented.

And in this event, it utilized the digital broadcasting where audience could appreciate the performance or “watch the news” through broadcast, and the interactive media, where people could have an access to communicate with kidnapped directly, but it’s pitiful not to find the document recording the dialogue between the audience and the victims. That’s interesting that besides people are attracted by the idea of being plucked from daily life and having every responsibility taken away from them for 48 hours, they also had a desire to be surveilled. I guess people may be eager to grab others’ attention, but may reassess themselves through this experience and I want to cite an article written in Independent here,

For that, I turned to Roger Plant, who has enthusiastically registered to be kidnapped. “I have been to a number of Blast Theory’s performances, and they are good at making you rethink suppositions and re-examine yourself.”

The other element that inspired me is “theatre,” which is the first passion on for Adams. In the article ‘How to kidnap your audience’ the author mentioned, audience are given strict guidelines in terms of how they can engage with it. It is a new point for me! Although the work put the audience in the center to make improvised behaviors, it is necessary to have strict and delicate arrangement for the happenings if we want to trigger real feelings and it must be like a “real” event. And “game” is also a new element that was never told about in the previous work we discussed. I never think about the game as a form of media art, a means of understanding and participating more easily for audience as well as a part representation of social and political dialogue. I think the game here has a strong connection to the idea of immersiveness, an easy way for people to swim in the world  that combines reality with virtuality, or an access to stimulating a strong sentiment resort to the strict arrangement of the game.