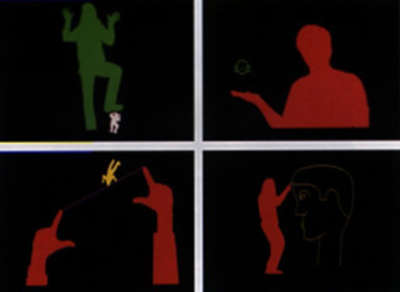 The Background of Myron Krueger’s Work

It was based on his previous work, Glowflow, Metaplay and Psychic Space, which focus on the quality of interaction. The first work, Glowflow, is a darkened room with tubes of light, sensing the participants’ footsteps. But this work lacks of the dialogue between man and machine, audience cannot be aware of the response from the environment. The second work, Metaplay, empathizes the interaction between participants and the environment. The artist from the other place can draw following the hand movement of the participant in the other room. The third work, Psychic Space, adds the responsive sound and also creates the dialogue between the participant and the computer that the movement of the participant can trigger the difference responses of the computer.

The Discrepancy from Others’ Interactive Works

“Man-machine interaction is usually limited to a seated man poking at a machine with his fingers or perhaps waving a wand over a data tablet. Seven years ago, I was dissatisfied with such a restricted dialogue and embarked on research exploring more interesting ways for men and machines to relate.”—Myron Kruwger

Kruwger’s idea with Videoplace is the creation of virtual reality that surrounds the users, and responds to their movements and actions, without being encumbered by the use of goggles or gloves.

The concept of Myron Krueger’s interactive environment is without wearable devices to interact with objects or other participants on screen. But is it a viable way to immerse participants in the virtual reality compare to the help of head-mounted display or the use of goggles or gloves?

“ a truly informative picture, in addition to merely being an informational surrogate, would duplicate the physicality of confronting the real scene that is meant to represent.”

I think Kruwger’s works lack of the aspect of 3-dimension space and audio, and the sense of touch. According to the interpretation of the virtual environment in Whatls.com, there are several elements to increase the immersiveness of the experience, continuity of surroundings, conformance of human vision, freedom of movement, physical movement, physical feedback, narrative engagement, and 3D audio. In Myron Krueger’s works, due to the reduction of the aid of the head-mounded display and data gloves, it has difficulties with presenting the sense of space and triggering the physical interaction with other objects or participants.

I think that is the reason why immersing the virtual environment with wearable devices is the mainstream nowadays because people can be more satisfied with the multi-sensory experience compare to Kruwger’s idea that participants are being liberated from a seat or the gloves, but constricted in the 2D experience. But Kruwger attempted to figure out the way to liberate the constriction of the wearable devices still expands the another path of immersive experience.

3 Replies to “Research Critique: Videoplace(1970) & the idea of immersion”