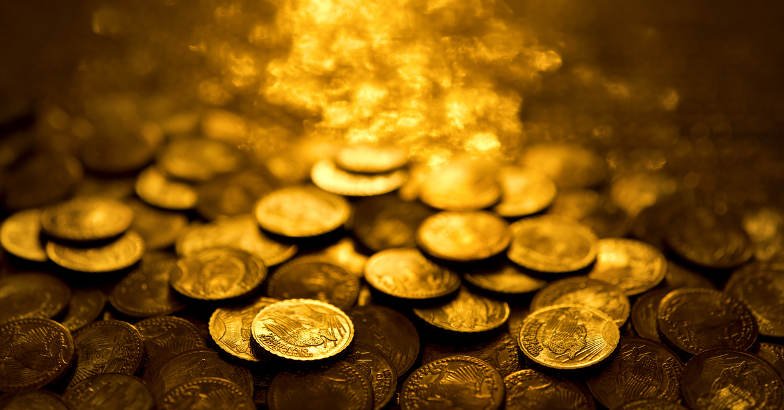 2.You can only move when the music is playing and the lights are off. (Looking around is allowed when the light is on and music stops.)

3.Whoever has the most $ at the end of time limit is the winner.

After 15mins discussion, Kee Yong and me outlined the game briefly.

Basically, we only have two kind of props，”treasure” and the control center that control the music and light. Honestly, at the beginning I worried that this game is too simple, not so interactive. However, reflecting on the bodystorming session last week, the game experience turned out to be really unexpectedly exciting.

Experience does not depend on what the installation is, but what the participants feel when they interact with it. We should consider a lot of things in different dimensions.

Sometimes we may overestimate or underestimate the process of interaction. As the creator, we are familiar with the installations we made, but other participants could have totally different reaction. So testing is very important,

Our installation’s most outstanding feature is the shifting between day and night. And with the mission impossible theme soundtrack, the atmosphere is exciting. Based on the note taker’s advice, i think we should add some more tricks in the game.For example, the participants may accelerate the night time after they touch the hiding button or something like that. Let the participants interact with the game, not only obeying the rule.

What’s more, instead of counting down the time, suddenly shifting day and night will be more interesting.

INFINITY MIRRORED ROOM—THE SOULS OF MILLIONS OF LIGHT YEARS AWAY, 2013 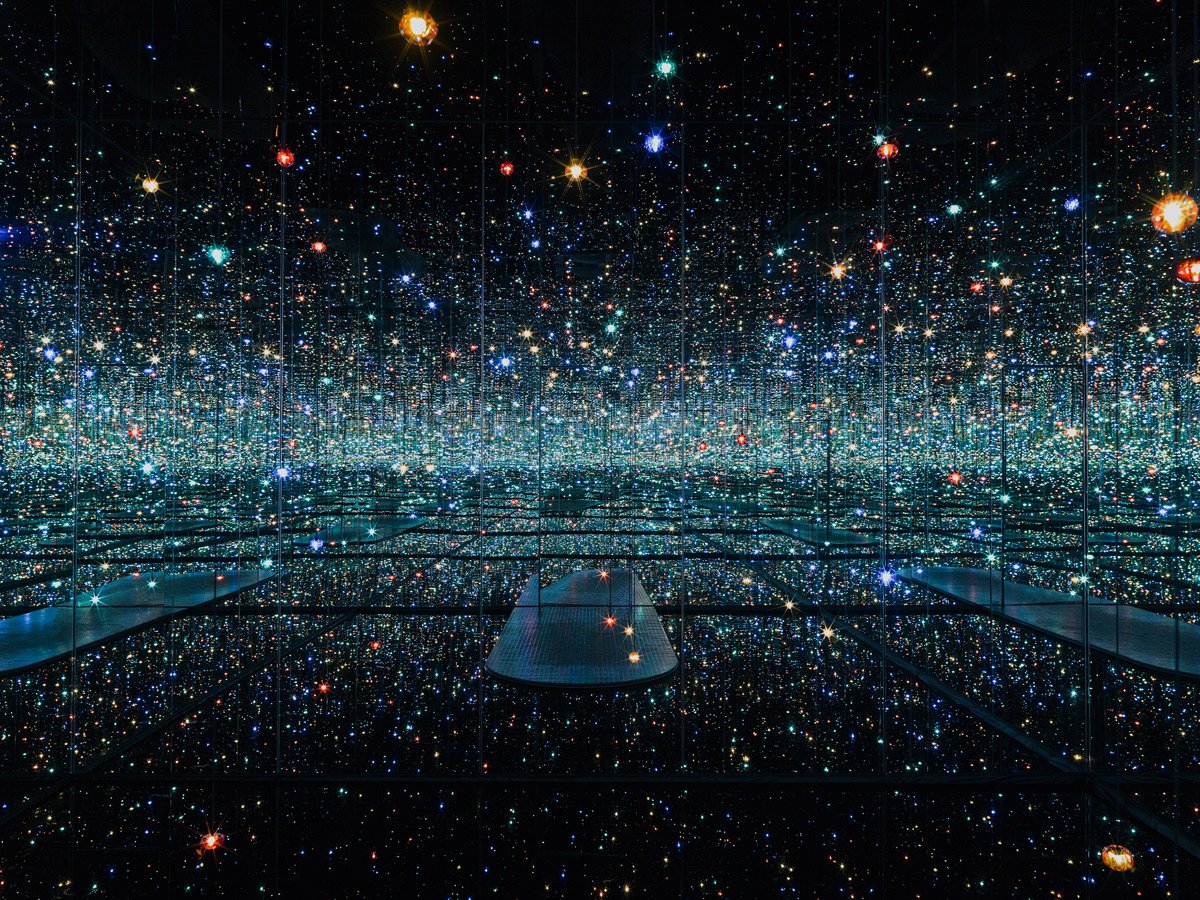 Japanese artist Yayoi Kusama has an obsession with polka dots, and this dazzling installation, titled “Infinity Mirrored Room – Filled With the Brilliance of Life” is quite a unique take.

Infinity Mirrored Room—The Souls of Millions of Light Years Away is an immersive environment that fosters an out-of-body experience, heightens one’s senses, and produces a repetitive illusion through the use of lights and mirrors. Similar in appearance to stars in the galaxy, hundreds of LED lights hang and flicker in a rhythmic pattern that seems to suspend both space and time. The visitor becomes integral to this work as his or her body activates the environment while simultaneously vanishing into the infinite space. This installation creates a harmonious and quiet place for visitors to contemplate their existence, reflect on the passage of time, and think about their relationship to the outer world. 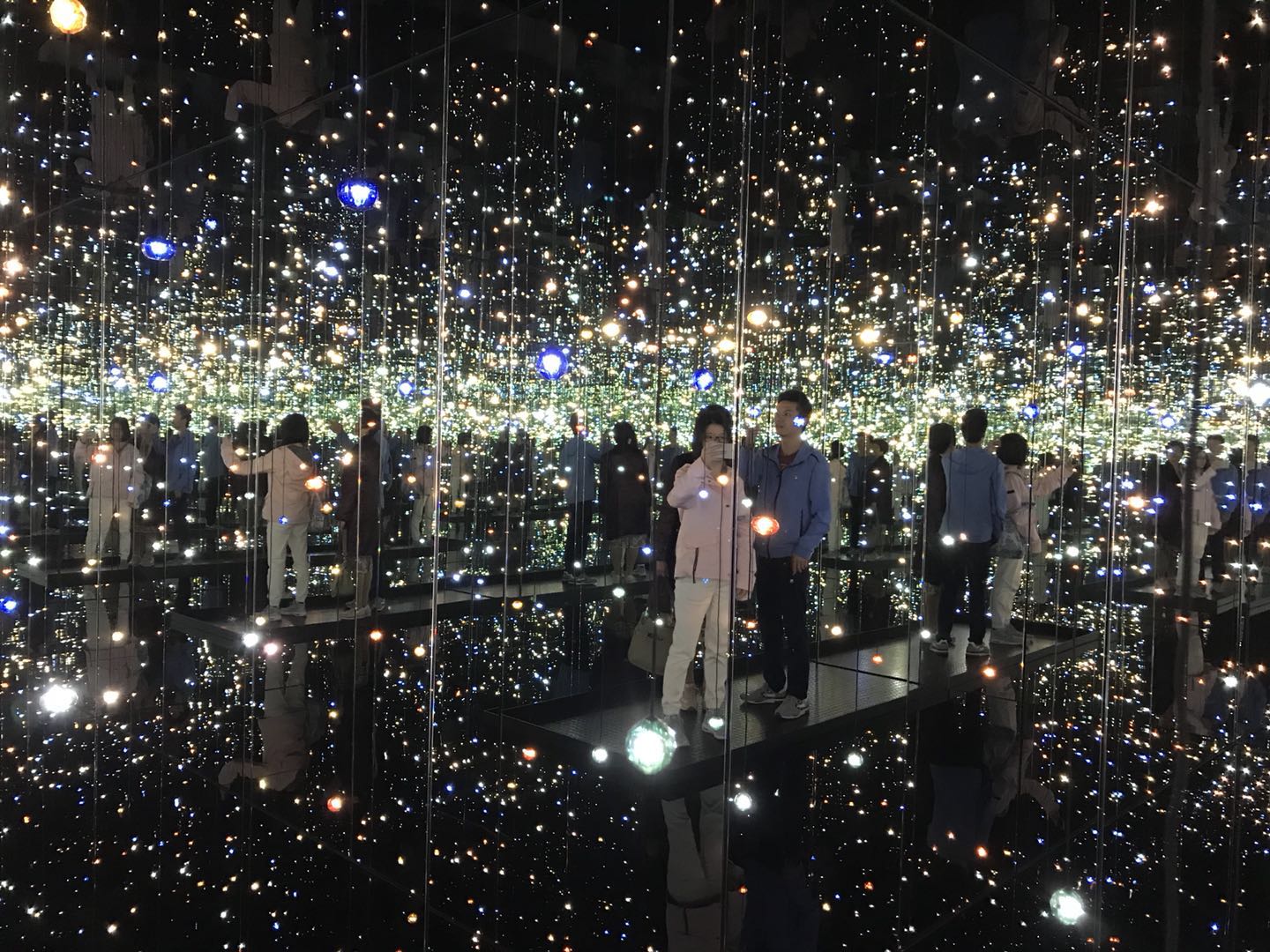 (me and my friends in the broad)

Why do you find this artwork or project intriguing?

Although it is not so interactive technically, but magically you may feel you have some interaction with the light. When the lights blink and change the color, it feels like the space around you is also changing. As if you are  having an interstellar  roaming.

Similar in appearance to stars in the galaxy, hundreds of LED lights hang and flicker in a rhythmic pattern that seems to suspend both space and time.The visitor becomes integral to this work as his or her body activates the environment while simultaneously vanishing into the infinite space. This installation creates a harmonious and quiet place for visitors to contemplate their existence, reflect on the passage of time, and think about their relationship to the outer world.

What is the role of the viewer?

Standing in the middle of this amazing space, the viewer should be as the observer of the infinite space.

Who has control over the outcome of the artwork or project? Is it the creator / artist or the viewer/audience?

It is the creator that control over the outcome of the artwork. The color and the changing speed is fixed. 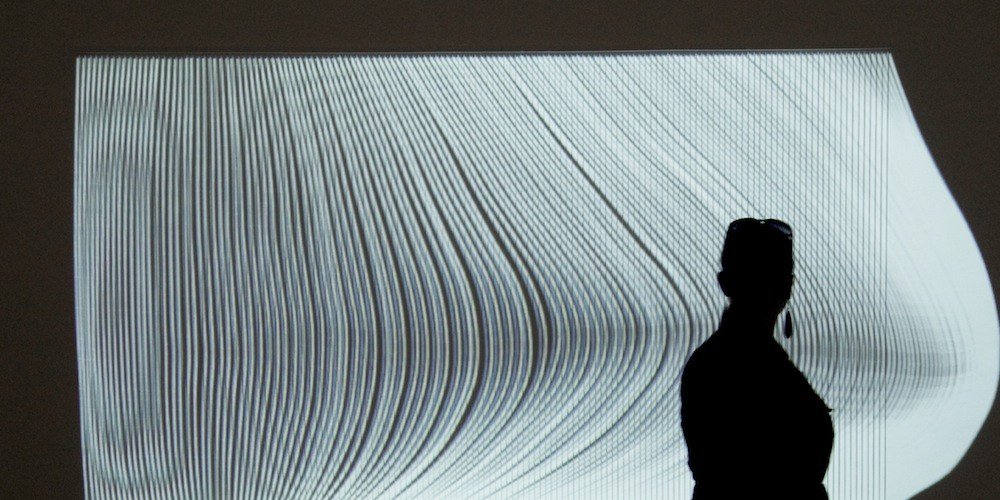 Notional Field is an interactive installation that consists of a wall-mounted sculpture containing hundreds of vertical and parallel lines made of elastic cord that are projected upon with a computer-generated, interactive animation of a similar number of lines.

The motion of these projected lines is ruled by a simulation, which makes them act like soft ropes, and said motion is influenced by a viewer’s movements as interpreted by a computer that surveys the scene through a video camera.

Thus, the physical gestures of the participant are translated into virtual forces that affect the computer-generated lines, while the physical strings of the sculpture remain motionless. The piece revolves around the idea of interface, which is interpreted as the point of contact between two different entities, and is displayed in the work in several ways: between the viewer and the piece (a human/computer interface); between the real and the virtual (the physical structure and its relationship with the projected structure); between the foreground and the background (as the projection interferes with the sculpture).

It is intriguing for me because the interactive animations of a similar number of lines is quite natural, as if the participant is touching the real lines.

It is interesting that the shadows of the people can’t block the scene within a safe distance. It matters when people actually being in front of this art work. Besides, this soft ropes looks like the strings of the instrument. If people’s  movements can also trigger some sounds , it will be more perfect. 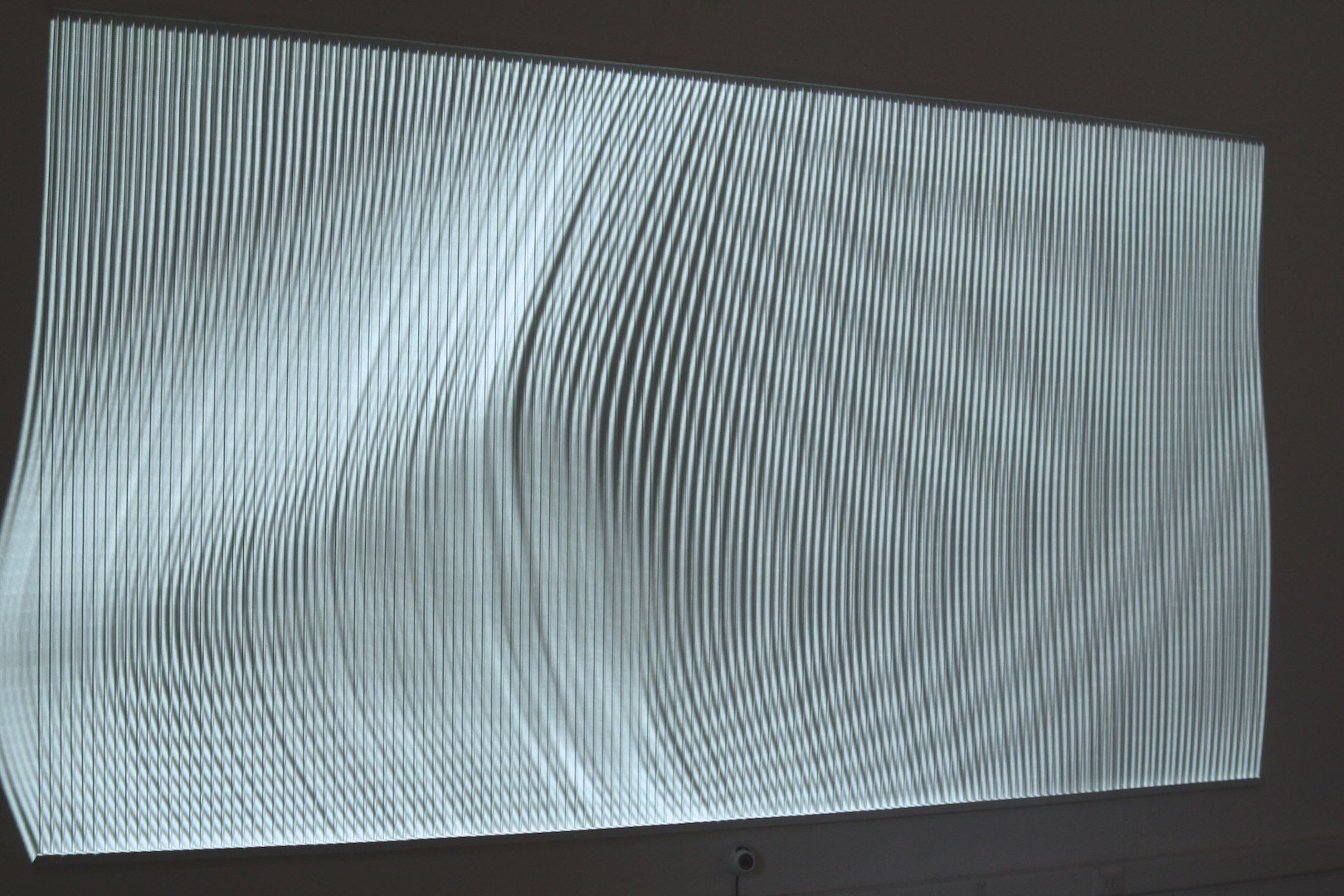 Firstly, we may build an electronic moderator to guide this game. Its appearance is no decided yet, but I think the sound is the most important part, which can push the plot and also use some BGM to rendering the atmosphere.

Besides, every player holds a device, as the following sketch. They can use the button with number to point out whoever they want. In terms of the light, it will blink at the beginning of the game to identify players’ role by the color.  Then it will go out to hide players’ real role.

The advantages of this installation:

1.You can run around the room with this device, as long as it can be detected by the moderator.

2.It prevents players from peeping, because in the dark everyone can press the button but only the device of werewolf or seer work.  It enables the villager to pretend to be other roles. Also, in the dark, nobody can see if you have closed your eyes or not.

At night, the moderator tells all the players, “Close your eyes.” Everyone begins slapping their knees (or table) to cover up any noises of the night.

The moderator says, “Werewolves, open your eyes.” The werewolves do so, and look around to recognize each other.

The moderator says “Werewolves, pick someone to kill.” The werewolves silently press the number of the one he wanna kill.

When the werewolves have agreed on a victim, and the moderator understands who they picked, the moderator says, “Werewolves, close your eyes.”

Now, the moderator awakens the Doctor and says, “Doctor, who would you like to heal?” The Doctor selects someone they’d like to heal. The person chosen (which could be himself) will survive if the werewolves chose to kill the them. If someone was killed, and then saved by the Doctor, the moderator will let the village know by saying, “Someone has been saved”, at the beginning of day time.

The moderator says “Seer, open your eyes. Seer, pick someone to ask about.” The seer opens their eyes and silently points at another player. And the moderator can directly reply yes or no.

The moderator then says, “Seer, close your eyes.”

The moderator says, “Everybody open your eyes; it’s daytime.” And let’s the villager know who has been killed. That person is immediately dead and out of the game. They do not reveal their identity.

Alternative rule:  After you die, you reveal what role you had.

For the first day, go around and have everyone introduce themselves (Example: Hey, I’m Matt. I’m the baker here in town, and I’m a villager.

Daytime is very simple; all the living players gather in the village and decide who to kill. As soon as a majority of players vote for a particular player to kill, the moderator says “Ok, you’re dead.”

Alternative rule:  To keep the game moving along, you can put a time limit to how long a day is, and if the village doesn’t chose someone to kill, they miss the opportunity.

There are no restrictions on speech. Any living player can say anything they want — truth, misdirection, nonsense, or a barefaced lie. Dead players may not speak at all. Similarly, as soon as a majority vote indicates that a player has been chosen to be killed, they are dead. If they want to protest their innocence or reveal some information (like the seer’s visions), they must do it before the vote goes through.

Once a player is killed, night falls and the cycle repeats. 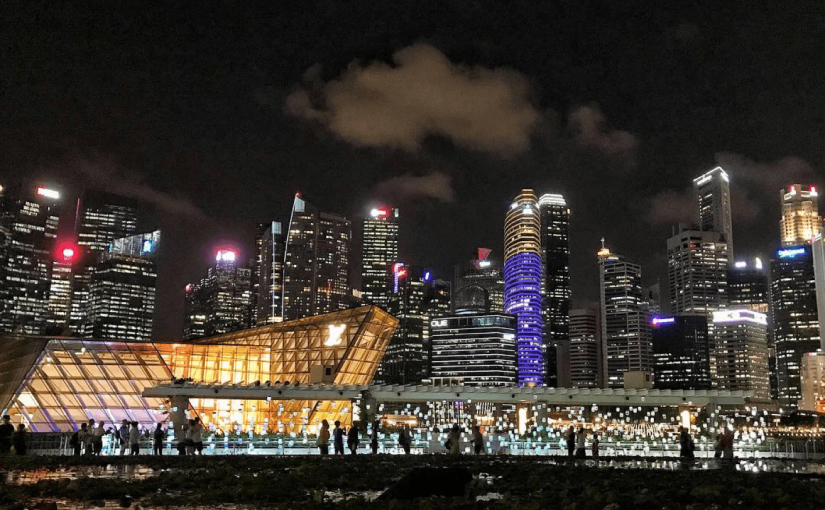 What does it mean to use time as an element for artistic composition? Moving images are in fact the manifestation of time as visual phenomenon, sequences as virtual records of possible worlds. Shades of Temporality combines video painting technology with content, exploring the themes of complexity, adaptation, social ecology, sustainability and temporality. It attempts to break the barrier between the spectators and creator, allowing the audience to participate in a critical process that enables them to work with moving images as a tool for mark making in public space. Using electronic paint rollers and custom software, the audience will be able to virtually “paint” videos, in real time, onto walls, creating endless combinations of moving murals in the process.

video of my own experience: https://youtu.be/XZDLym9060g

Facey Thing is a fun and satirical celebration of the coming together of selfie culture and universal surveillance to create hyperreal simulated images of ourselves through the art of play.

As passers-by come into range of the camera, facial tracking will identify their faces and blow them up onscreen as per spy television shows. When individuals become engaged and move closer to the screen, they can interact creatively by virtually painting with their faces. 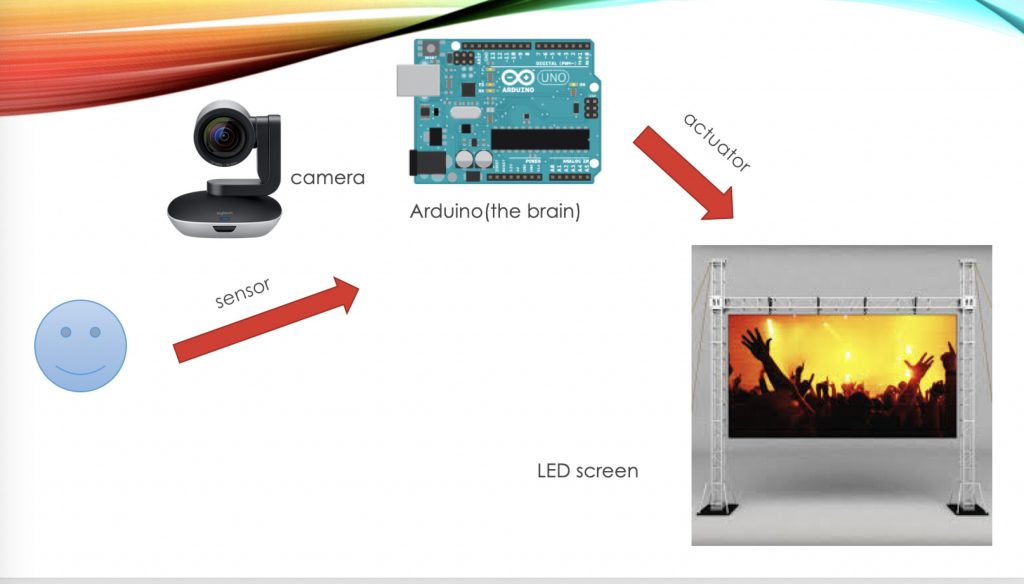