Going in to this first micro project I was a bit nervous. Instagram for me is both personal and not so personal at the same time. Personal in that sense that I do not want random people or strangers seeing me and my feed. But simultaneous do I not want my followers to see me as something different. I want to fit in with the others I follow and that follows me and the post I did in this micro project would change that.

I did however post it on my regular feed engstr.m and did not create a new account. With this I did the two things that I was afraid of I opened up my account to public from private in order to let my course mate see my post that I posted with #ossadm. I did also with my posted pictures post something that I usually don´t post in my feed or see others do either. So to say at least I was uncomfortable.

That was more difficult for me than finding something to take a picture of. Even though I am an exchange student and that ADM doesn´t have a special significance to me jet. So I took the assignment and made it more about what I felt about ADM in the moment by photograph different parts of the school and it’s surroundings.

I took four pictures that I posted in one post. The first one, a picture that shows the classroom we had the class at but through its windows. The caption to the picture is “Looking in from the outside”. Which together with the picture reflects how I feelt to come to a new place not knowing and understanding but still be there but as in the picture behind a barrier like the window. I can see it but I cannot completely be there. 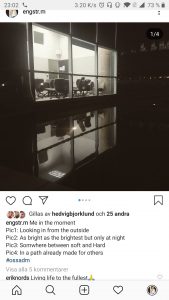 The second picture is a picture of the water outside of the ADM building with one bright light. The caption to the picture is “As bright as the brightest but only at night”. The meaning behind this picture is how I most of the time doesn´t feel that I am good enough. Not for studying at ADM here, but then sometimes I get a spark and feel confident. 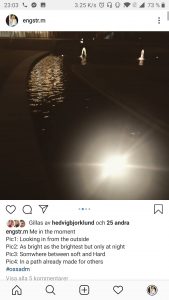 Picture number three is taken inside of the ADM building beside a locker in the hall with the caption “Somewhere between soft and hard”. Where I with my skirt and blouse represented the soft and the locker the hard. When I took this picture I thought about the course registration process, which was about the only thing I thought about that whole week. And how harsh it was with the waitlist the algorithm system and so on. But also how nice and soft it was, giving students the opportunity to attend classes and then drop them if they didn’t like them and give them a second chance by finding a new course. And how I was now in between the hard and the soft feeling confused. 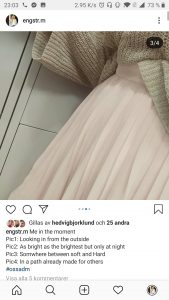 The fourth and final picture had the caption “In a path already made for others”. The image was on the road leading up to the ADM building. It made me think about the path I had taken before and in Singapore and how I felt a bit trapped that I had to follow a certain path in order to get the credits and courses that is required of me so I can get the courses counted back at my home university. 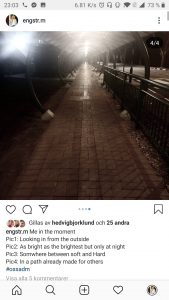 The result on my post on Instagram was that when I opened up my account to public I got fifteen new followers. Which was scary and not what I wanted, the next day I did wake up to some messages from strangers. This resulted in that I closed my account again and started a new account engstrom474 where I posted the same pictures again under the same hashtag as before. My originally post did get twenty-six likes and five comments in the three hours it was up. Four of the comments was from friends messing with me and thinking that the post were fake and the fifth comment was from a friend basically saying that she missed me and my depth. It was fun to see how wheel my friends knows me and that they can see that it was a post I would by myself post. Except one of my friend that know me in another way that pearheps have seen a side of me that the others haven´t and does also miss that about me. In this exercise did  I gain a lot of courage by stepping out of my comfort zone but it was also really nice when I took down the post and created a new account without worrying about how could find the “real” me. 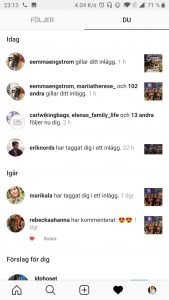