In my broadcast project I did take inspiration from the JenniCam and whatever I did the 20 minutes that I was live was included in the live video. the only thing though was that the perspective of the video was that the camera always faced me. In JenniCam the camera was static and did always record her room. In my case was the camera flexible but it was always filming my face.

I did interact with people during the recording, I moved changed places but you can’t really tell. I showed everything that I did but from a perspective that made it hard to tell where I was or what I was doing. The only clue is the surrounding that I am in and the voice in the background. Which did work fantastic and I would imagine that everyone that was watching did know what I was doing without seeing it. Just seeing me react to it.

I wanted to keep the live recording as real as possible and did so by not making up a plan before and just tried to not to think with the camera. I did however send a message in to my livestream saying something about the situation I was in. This made my audience to interact in the livestream which was really pleasant.

Before my live performance I did three posts on it on Instagram so they knew that I was supposed to send live. I did also ask them a question to make them a part of the whole experience by making them  choose where I would make the live. I did listen to them and ended up making it in ADM. 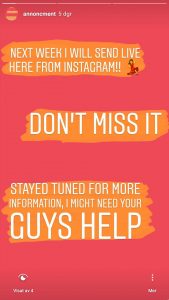 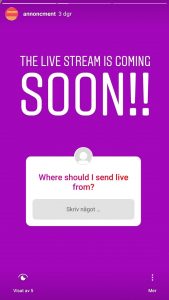 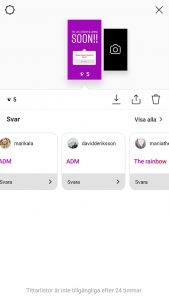 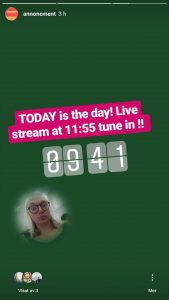 The video did not end up the way I wanted really, Since my professor draged ut the class 5 extra minutes. And when you are live you can´t go back and fix it people will notice and it will already have been seen of alot of people..