It is always very interesting to go back to when the digital age was forming and just about ready to take shape into what we know it as today. What we today see as being mundane tasks, everyday tools or entertainment that we couldn’t possibly be without simply didn’t exist some odd 30-40 years ago.

In “Video Games and Computers Holding Power”, Sherry Turkle interviews a young boy by the name of Jarish. Jarish grew up during the time of pin-ball and arcade games, something that has practically diminished into nothing due to the personal computer. What I find very interesting however is the similarities between me and Jarish, even though we grew up during two completely different digital timeframes.

For Jarish, the arcade games sparked an interest in the underlying “how”, how does this work? How does the characters move and interact, how does the players actions and input alter the behavior of the games? Although he knew programming was the underlying mechanics of the arcade games, the interest translated into other fields such as mathematics and physics, which he understood needed to exist alongside the programming.

I don’t know where Jarish is today, I can only hope he is pursuing his passion. What I do know however is that him and I aren’t all that different from one another. The games I played growing up might have been a lot more technologically sophisticated and complex, but they still sparked this interest of understanding. The same understanding that Jarish was intrigued by during his childhood, and I think that games will keep on doing this to children as long as they exist.

Singapore has undergone remarkable and to an extent almost impossible changes since the nations conception. As the country progresses into the future and develops, what happens to the relationships that the citizens have to the former monuments of Singapore?

In The Lapse Project, INTER-MISSION effectively “erases” the familiar landmarks of the nation with a multi-dimensional approach. The Lapse Project lets users freely “edit” these landmarks to let them reflect on both the presence and absence of them. 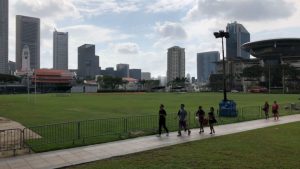 I think that this is a very interesting way to step back and reflect on our surroundings. The landmarks in the installation serves as a collective memory of the nation –  a very wide and more diffuse topic to form an objective reality around. Instead, I think this leads to a more personal reflection of what this means to each one of us personally.

However, not being Singaporean I’ve got a hard time applying this to the landmarks of Singapore, but I would love to see a similar installation in Stockholm where I can personally relate.

I’ve always had a thing for outer space. It’s something about the unknown, vast expanse of stars and galaxies that is so mesmerizing, I could stare at it for hours. We will never discover every corner of the universe. We might not even discover everything in the Milky Way, and this to me, makes space even more mysterious and beautiful.

FUTURE WORLD at the ArtScience Museum plays around with digital interactivity in a lot of ways. Some of the installations, usually the more playful and bright, requires you to interact very actively. They work somewhat like games in a sense, and although some of them are very clever and fun to experiment with, they don’t really compare to the installations that require more subtle interaction from the user. In Space, you get enveloped in stars that seem to go on for miles, faintly choreographing with the ambient background music. The illusion cleverly created by mirrors and light prevent you from seeing past the curtains, leaving the viewer with the experience of a vast system of stars with seemingly no end.

I really liked this installation, I only wish it was done at a bigger scale, as you can break the illusion of infinite space by turning the corner of the exhibit which reveals the end of it. And I’d love to see a more enveloping take on the installation, let the viewers get lost in the stars, have us wander within the lights.

“A celebration of communication” – Sean Hathaway

There is a reason inanimate objects have a huge roll in horror films and nightmares of every average human child – they are terrifying when they come alive and convey some form of emotion. Another relatively scary place is the internet. Most of the times, you won’t come across the unnerving content of the internet by accident – you have to actively search for it. There is however easier to access content across the web that can be equally terrifying; the emotions and confessions of random strangers across the free information highway we call the internet.

So what happens when you combine these two things? The answer: eighty identical teddybears hung up on a wall, feeding on emotional content from the web and translating it into one out of twenty-four emotions, which is then read by one of the teddy bears in a computer generated voice. One at a time, for one minute, indefinitely.

The purpose of this installation is best told by the artist of “T,ED”, Sean Hathaway;

“Emotions are plastered onto the internet and it’s become a listening tool for those who need it, yet, the information that’s posted online are futile and nobody is doing anything with it…”

Sure, Sean, nobody is doing anything with the vast amounts of emotions and thoughts floating through the cyber space, but, in the words of Ian Malcolm; “Your scientists were so preoccupied with whether they could, they didn’t stop to think if they should“.

Look, I’m not saying I didn’t enjoy this installation, the thought behind it is actually quite interesting. So much information is being bombarded onto the vast canvas that is the internet, and the concept of translating it into something tangible and real is very fascinating to say the least… But why did it have to be bears screwed to a wall screaming out the lost cries for help on the internet in a monotone, robotic voice? The approach taken to this intriguing subject is quite paradoxical; nothing is “being done” with the emotions of the internet, okay, eighty stuffed bears are now translating it into one out of twenty-four emotional sentences and screaming it out into a room, better.

10/10, would scare my future kids with this installation.