The Labrador Nature Reserve is connected to

These boardwalks, trails and pathways are all connected in a seamless way to give visitors a sense of the green space and protected nature of the area, allowing for scenic walking and varied visual experiences in a small space.

We were instructed to give a Sensory Ethnographic report as part of our analysis of Labrador Park; 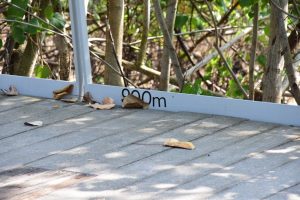 The trees, crackling dry leaves left on the boardwalk and the boards themselves all had a brownish tint to them.The boards we were walking on felt sturdy and safe; not once did I fear falling through, or fear that these boards were old or in disrepair.

The plants and wildlife encroaching on the boardwalk did make me feel like the walkway was imposed there as a careful intervention to allow human traffic and experience, whilst trying to leave the wildlife alone as much as possible. This further evidenced by the trees that were occasionally poking out of the floor of the boardwalk. They offered a safe way to get a tactile sense of the woods without forcing the visitor to extend their arms outside the bounds of the walkway, and outside the “zone of safety”.

The right side of the boardwalk was not as protected or isolated; It was clear at many points that a wide open space was just beyond the treeline. This broke the illusion of walking through untouched mangrove area.

The boardwalk and the trees gave a feeling of sturdiness to the area. The tree didn’t give much leeway even when pushed. They felt like they could withstand a lot. Also evident was the soft layer of moss that often covered the trees.
As we got closer to the ocean a scent of seaweed permeated the air. The wind became more pronounced and chilling when approaching labrador park, making the occupation of the space more bearable. Combined with the generous shading, it became a pleasant stroll. 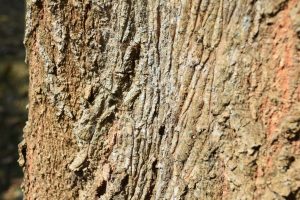 Moving through the berlayer creek mangrove, the sensory feeling of being away from the bustle of the city grew stronger as we moved further towards labrador park. The trees blocked vision and a lot of the sound from the outside world, while sounds from birds, insects and other wildlife filled the soundscape with a profile that was distinctly tropical. 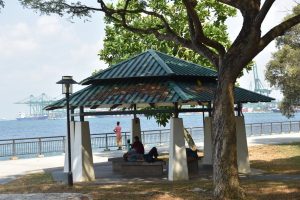 Within Labrador Park there are several structures offering shade and benches for resting and recreational use. Pathways made with concrete surrounded or framed by intentionally placed flowerbeds.

The structures offering shade are made with steel beams painted green, as well as white/grey metal roofing- Rock underneath benches and roofing areas are jigsaw-puzzle pieces assembled together in a pleasing pattern with a warm reddish hue embellishing them. A conscious effort has been made to prevent flooding by surrounding walkways with adequate drainage. Trees in the park are often identified using small signs denoting their latin and common english names. 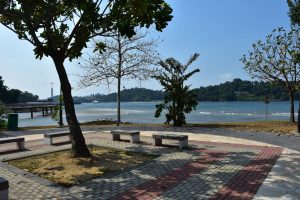 When walking through Labrador park, the space opened up. Gone was the restrictive boardwalk, and open were the dirt spaces with sparse trees. The trees were significantly spaced enough that it made sense to mark them with name-tags identifying their genus when they were close enough to the walkway, and large enough to warrant it. Wind could traverse this space easily. The grass could have been inviting, but on this day it was dry, brown and pointy. Nevertheless the space still implied an unrestrictiveness that was refreshing after the previous zone of Berlayer Creek. The soundscape was vaguely evoking waves hitting the shore, but not enough to be distracting or dominating. Dry leaves being occasionally kicked or tread on were sharp reminders of our presence in the space.

At the corner junction of Labrador Park there is a large man-made naturalistic rock that denotes a famous rock formation known as the Dragon’s Tooth. The replica serves as a talking point for reflecting on the history of voyagers traveling around this area at sea.

Inside Labrador Nature Reserve is a concrete pathway that is wide enough for a vehicle to pass through, with large brick walls on the bottom part with large holes that I assume are for allowing water to drain out of the dirt after heavy rainfall.

The path from Labrador Park to Labrador Nature Reserve is not inviting in the slightest. It feels like a road intended only for Park Attendants and construction workers, not for visitors. 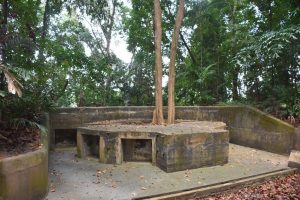 There are also many historic structures made by the British leftover from the second World War. These old bunkers and gunnery positions are interesting set pieces and landmarks to discover in the jungle canopy.

There are also several places to learn the history of the area, with many signs filling in knowledge gaps and historical context. These areas also sometimes offer seating arrangements, but in ways where it is impossible to sit and read at the same time. 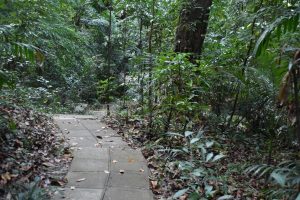 Many small paths squeeze their way through the reserve, often feeling like untread paths that should not be traversed by visitors due to the lack of signs. It is very easy to get lost due to the low visibility and encroaching flora. That also bringing with it a feeling of not being safe.

The light and climate condition 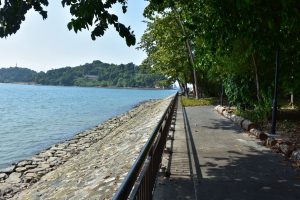 On our particular day of visit the sun was shining with no clouds in the sky. Singapore is typically very humid and hot, and visiting a site like this with a plethora of flora that can block out the sun and offer shade is very alluring. When the sun was shining, it cast beautiful shadows across the ground and treeline due to the canopy and leaves above. 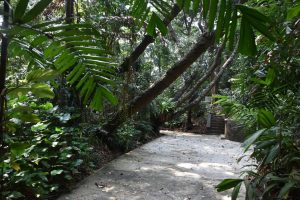 The lighting conditions were varied depending on what area of the park the visitor occupied. Areas with lush foliage were dark and closed, only allowing bounce light to define it. Spaces that were intentionally opened up naturally offered a brighter and more pale color palette.

There were enough lights in labrador park to imply that the path is a pleasant walk even at night, but such luxury is not offered in the labrador Nature reserve, which is closed at night.

There were also no lights in Berlayer Creek Boardwalk.

What is our opinion on the current placemaking programme? 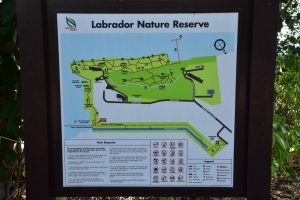 The placemaking programme of Berlayer Creek, Labrador park and Labrador Nature reserve has a few qualities to it;

Berlayer Creek definitely has its own identity as a simple walkway, and communicates clearly that it doesn’t want loitering or continued presence.

It has two observation decks which allow users a brief respite in their travel to enjoy the views of the mangrove for a little while, but the benches placed there are thin and uncomfortable.

The park offers pleasant paths and shelter structures, but the design and color of these elements are pretty generic and nonspecific, and could be found anywhere in Singapore. 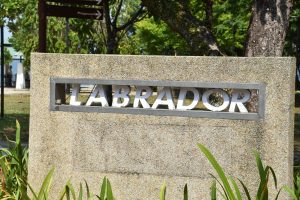 The Identification sign that informs the user that they have arrived in Labrador Park is also very lacking, bearing a resemblance to an apartment-complex sign. 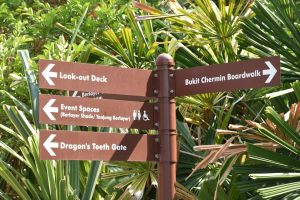 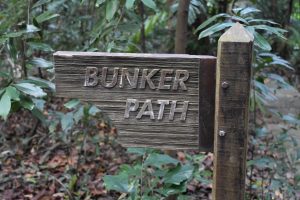 The navigational sign placement in the Nature Reserve is also very sparse, resulting in visitors getting lost, frustrated and confused whilst trying to navigate the space. Overall it could use a tuneup to improve traffic and navigation, as well as an overall design unity.