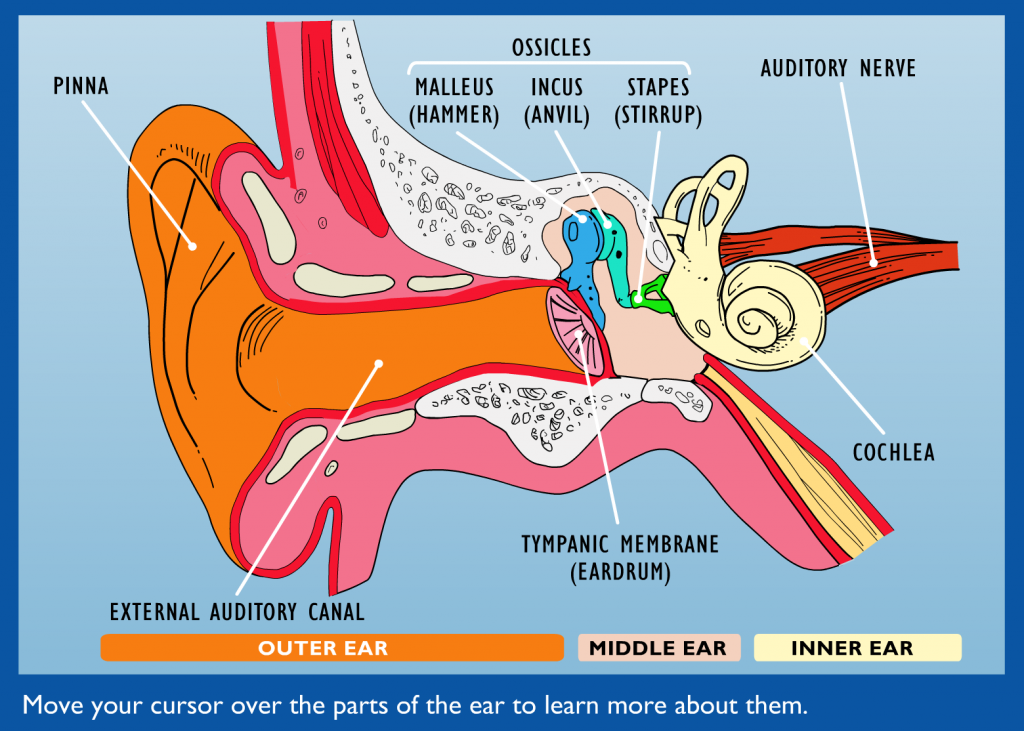 (click on the image to be directed to the interactive site!)

After researching and understanding about how humans hear, I was curious as to why some people have poor hearing, for example our grandparents always complain that they’re unable to hear as well as they used to.

What happens to the ear when you are losing your hearing?

“We’re focussing here on age-related hearing loss – losing your hearing as you get older. This is also called presbycusis. The tiny hair-like cells in the cochlea deteriorate over the years. They don’t vibrate as well as they used to in response to sound. Sounds can’t be heard as well as they were before, and the clarity of speech is reduced.

“Someone with age related hearing loss often feels that people mumble and they don’t understand what is being said, particularly in noisy environments. This is because the hair cells that respond to high-frequency sounds are more likely to be damaged than low frequency sounds. High frequency sounds are important for understanding speech. Your ear also loses the ability to tell the difference between very similar sounding sounds. That’s why people get words confused. With mild or moderate hearing loss the clarity will be affected when the volume isn’t always.”

Is there a cure for hearing loss?

“Unfortunately not. Important advances have been made but there are still no treatments that can undo or halt the progression of hearing loss. Once the damage has happened to the hair cells they cannot be repaired. Some people are more susceptible to hearing loss than others. 70% of people in their 70s have hearing loss.”

Apart from the fact that hearing loss cannot be cured :(, these facts are so cool!! Now I can understand how my grandmother feels! And also, because my grandmother uses a hearing aid, I went to research on it as I was also curious as to how it works.

How can hearing aids help?

Hearing aids are primarily useful in improving the hearing and speech comprehension of people who have hearing loss that results from damage to the small sensory cells in the inner ear, called hair cells. This type of hearing loss is called sensorineural hearing loss. The damage can occur as a result of disease, aging, or injury from noise or certain medicines.

A hearing aid magnifies sound vibrations entering the ear. Surviving hair cells detect the larger vibrations and convert them into neural signals that are passed along to the brain. The greater the damage to a person’s hair cells, the more severe the hearing loss, and the greater the hearing aid amplification needed to make up the difference. However, there are practical limits to the amount of amplification a hearing aid can provide. In addition, if the inner ear is too damaged, even large vibrations will not be converted into neural signals. In this situation, a hearing aid would be ineffective.

That’s kinda what I expected but that is still so cool. Thank God for science!!!

So, Cheryl posed this question to us the other day. And actually I’m quite interested in finding out too!!

Frogs don’t need to drink water since they can absorb it through their skin while humans have waterproofing proteins in their skin to help prevent water loss.

Both frogs and humans have many of the same organs. Frogs and humans have lungs, stomachs, a heart, a brain and livers. Humans also have a spleen, a small intestine, a large intestine, a pancreas, and a cloaca; in addition to a urinary bladder, a gall bladder along with a ureter. Males of both species have testes and females in both species have ovaries. A Toad’s eardrum is the circular indention behind their eyes. Toads also call quite loudly. Frogs and Toads are able to call at upwards of 90 decibels.  just for reference:

They have quite sensitive hearing, so the question is, how do they not damage their eardrums or deafen themselves with their loud calls?

Scientists have discovered that Frogs hear with both their ear drums and their lungs and a pressure system builds inside the Frog that minimises vibrations from internal noises made by the frog.

To further elaborate on this, I need to talk about how a frogs ear drum works. A frog’s ear drum is called a Tympanum and works in very much the same way that our human ear drums work. A frog’s ear drum, just like a humans ear drum, is a membrane that is stretched across a ring of cartilage like a snare drum that vibrates. There is rod that is connected to the ear drum, which vibrates by sounds that come at the frog. That sound is just pressure waves. The rod sloshes around in the inner ear fluid, which causes microscopic hairs to move, which send signals to the frog’s brain for interception. A frog’s ear lungs also vibrate when sound waves come toward it, although they are less sensitive than the frogs ear drum.

That’s what we’ve seen from how humans hear!!