5 CHARACTERS FROM LITERATURE OR FICTION:

Harvey Reginald Specter is a skilled lawyer, considered “the best closer in New York City”, and a name partner at Pearson Darby Specter. After being promoted to the position of senior partner at Pearson Hardman, he hired Mike Ross, a veritable genius who was able to pass the bar exam despite not attending law school, as his associate.

Harvey is just a person who is oozing self-confidence. The swagger in his walk is just one indication amongst many. While I cannot really relate to that (yet.. HAHA), I really appreciate his wittiness!! He comes up with the best comebacks on the spot, and his sarcasm is unrivalled. If you ask my friends, one word they’ll use to describe me is punny. I love puns, I appreciate good humour and I love witty people!!! And I love being sarcastic. Not the kind of passive aggressive sarcasm, but fun light-hearted sarcasm. To me, people who are able to think on the spot and give a snarky reply are the absolute funnest (is that a word?)!! I aspire to reach a Harvey Spectre level one day but I am unsure if that is actually possible.. Hmm…. But I definitely do admire him a whole bunch!

(both Cinderella and Mike are my final characters and for the full detailed analysis, click on their names!)

The name Walter Mitty and the derivative word “Mittyesque” have entered the English language, denoting an ineffectual person who spends more time in heroic daydreams than paying attention to the real world, or more seriously, one who intentionally attempts to mislead or convince others that he is something that he is not.

Walter Mitty’s dominant character trait is that he is a lonely dreamer. He creates an imaginary world where he is successful and happy, and brave as exciting things happen. These daydreams allow him to forget that his is an average, ordinary person leading a normal, boring life.

Much like Mitty, I am a very average person. In fact, I’m just a painfully average Jane. But much like Mitty also, I tend to let my mind always wander and wonder. Just imagine how fun it’d be to live in the Harry Potter universe! You could get owls to send mails, conjure spells to appear and disappear- all fun and games. There’s also the matter of being able to be whatever you’re not in real life when your mind wanders. I can be a pilot, a neurosurgeon, an astronaut, a polar bear etc. And real life is definitely considerably more boring than that. And that’s why 99% of the time when I’m not focusing on what I’m doing, my mind is taking a trip around the universe (which explains my spaced out look).

Rapunzel is a young princess kept unaware of her royal heritage by a vain old woman named Mother Gothel, who raises her in a secluded tower in order to exploit her hair’s healing abilities to remain young and beautiful forever.

While I was not literally kept in a tower by my mother, I do feel that I grew up in a fairly sheltered environment, which kind of is a given considering how I grew up in an Asian society where parents are widely known as helicopter parents. Hmm haven’t found tru love yet tho….

As reflected by his Globe and Oscar speeches, DiCaprio has long demonstrated his passion for environmental issues. In 2000, he hosted an Earth Day celebration and interviewed former U.S. President Bill Clinton for a television segment about global warming. DiCaprio also wrote, narrated and produced The 11th Hour, an environmental documentary that was released in 2007.

The actor is one of the founders of The Leonardo DiCaprio Fund at California Community Foundation, a nonprofit that supports and brings awareness to numerous environmental causes. He’s also served on the boards of the World Wildlife Fund, the Natural Resources Defense Council and the International Fund for Animal Welfare.

To find out more about why he’s such a lovable teddy bear:
How Leonardo DiCaprio became one of the world’s top climate change champions

I love how Leo uses his fame to bring awareness to such important issues like climate change. I personally think that we don’t really see much of celebrities doing such impactful stuff with their fame. I can only think of Leo and Emma Watson at the top of my head.

This brings us to…

She’s got the brains, she’s got the beauty as well! Emma Watson graduated from Brown University while being so busy with filming and even attended Oxford University.

Emma Watson is also a women’s rights activist. She does what she’s passionate about and brings attention to issues that matter! In July 2014, she was appointed as a UN Women Goodwill Ambassador.  Malala Yousafzai told Watson she decided to call herself a feminist after hearing Watson’s speech

Truly inspiring! He started from virtually nothing (got evicted from his house as a child) but worked his way up and worked so hard to get where he is now! And he’s always so thankful and always ever so humble and grateful. He never takes for granted his position!

Christine Caine is an Australian activist, evangelist and international speaker. She and her husband founded A21, a campaign aimed at abolishing injustice in the 21st century! A campaign that I myself feel really strongly about. 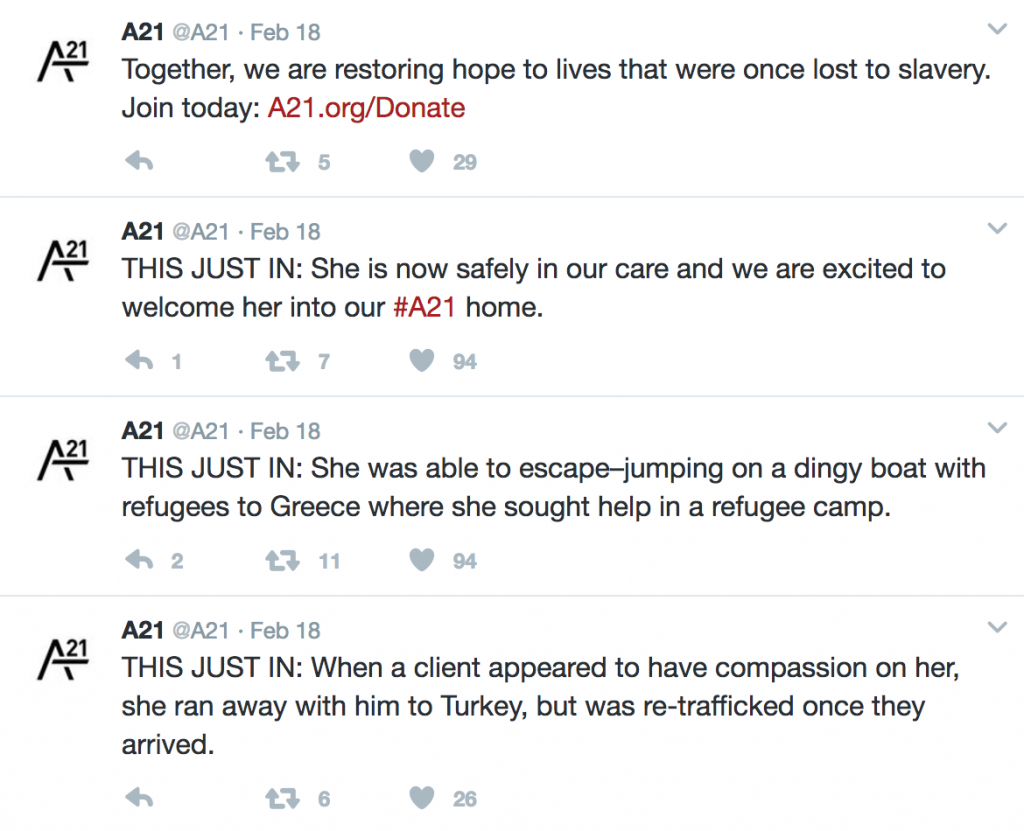 Chris Pratt went from serving as a waiter and eating leftovers to this huge hollywood star today. And the best part is that even with his fame, he doesn’t suppress his faith. That is, stars these days usually try to cover up their religion, but Chris Pratt isn’t afraid to tell the world that he’s Christian!

I’ll be keeping this quite brief because I don’t wanna go into details of all these people I know!

My mom has to be the most selfless person! She quit her job just to take care of my brother and I because one of our domestic helper was neglecting us <3

My dad has to be the most hardworking person! He works 2 jobs to provide for our family <3

My elder brother is such a role model for me!! He’s so smart (but he’s so not humble lel) and just naturally a very perfect person (just that he’s not humble lel) ahah and he’s very sweet and caring!!! He went all the way to Mina Lima in London for me just for my 2D assignment how cute!!!

My roomie Vania always gives it her all when it comes to her work! She’s also the nicest person who gives in instead of arguing. In short she is a very nice potato and the best roomie to have!

Eloieieie!!! She taught me so much! Since I was from JC, I didn’t have any prior background of anything art school but eloie taught me so much stuff from the nitty gritties of filming to illustrator pen tools. And usually people can be quite selfish when it comes to teaching others, but eloie is the complete opposite! I LUV UUU ELOIE #uinspireme!!!!!!