For my work, it’s actually all based on my journey in school!

I chose to use a fish to represent me and my journey because school of fish right?

Basically, my designs are a timeline of my life, more specifically school life, in chronological order. 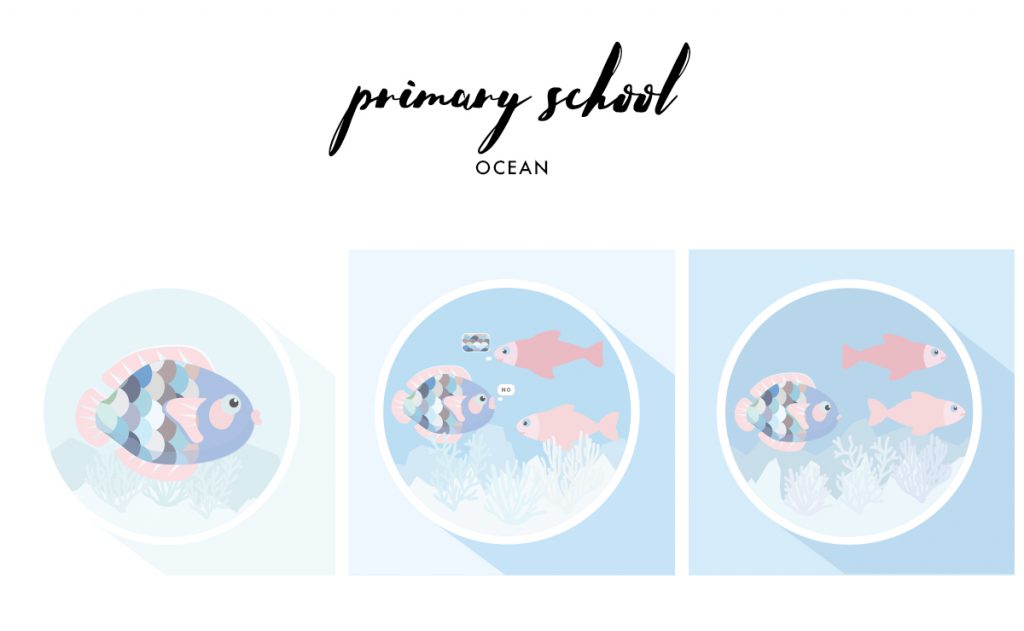 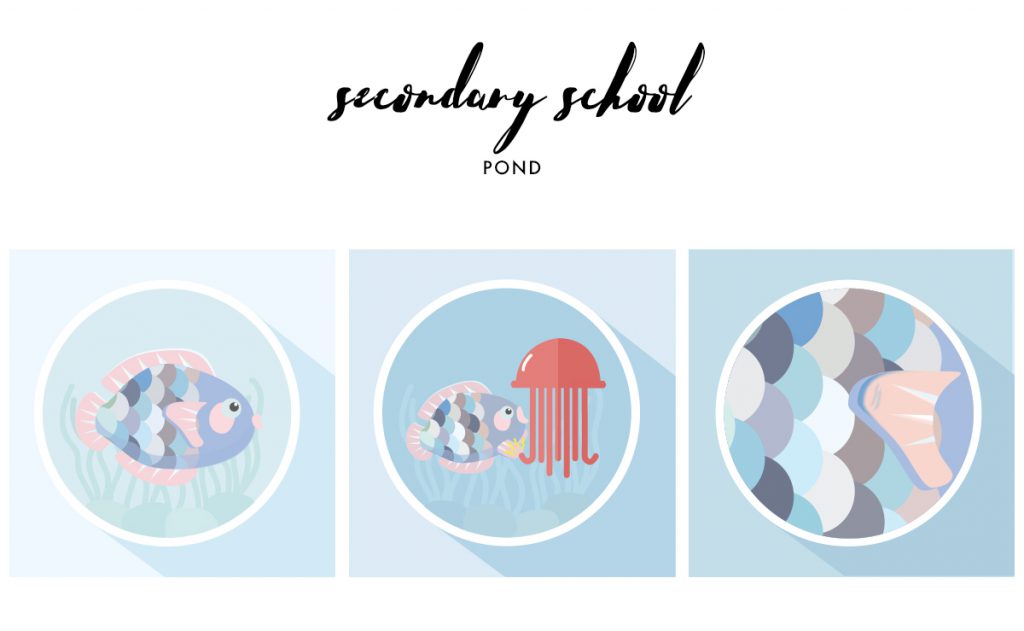 After primary school, we’re sorted based on our PSLE (Primary School Leaving Examinations) aggregate score. Therefore the ocean gets dwindled down to a pond. In secondary school, we are now grouped with people around the same PSLE scores as us. Thus, smaller variation of species of fish, and hence ocean. 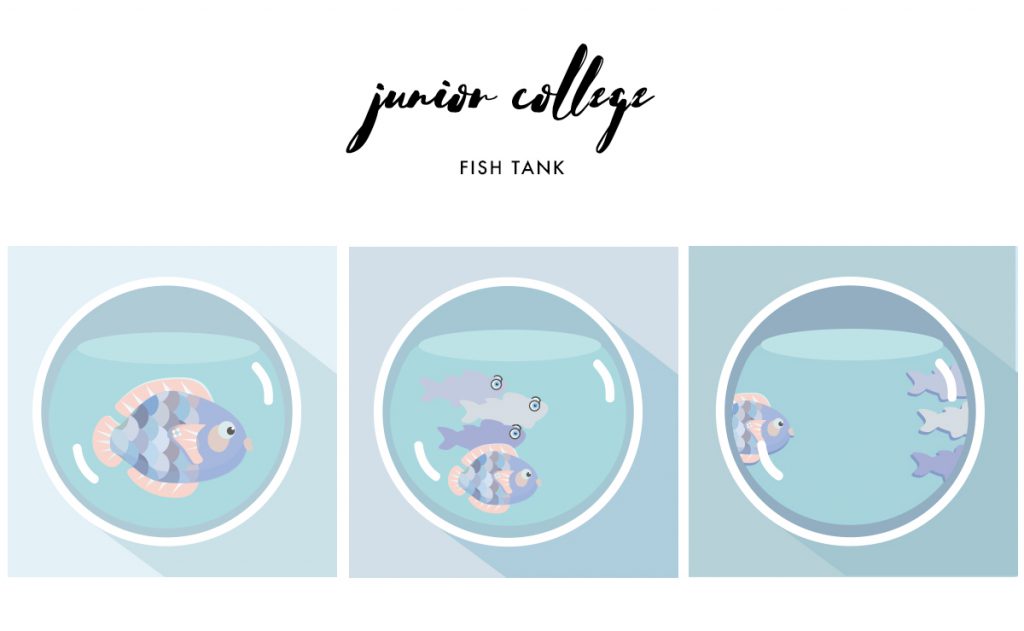 After secondary school, we’re sorted by our O Level results into either a junior college or a polytechnic. So the pond gets even smaller! Into a fish tank now. For my junior college (Serangoon JC), almost everyone had the same L1R5- it was either 11,12 or 13. Therefore I felt that the fish tank would most accurately portray the lack of variation of fish species. 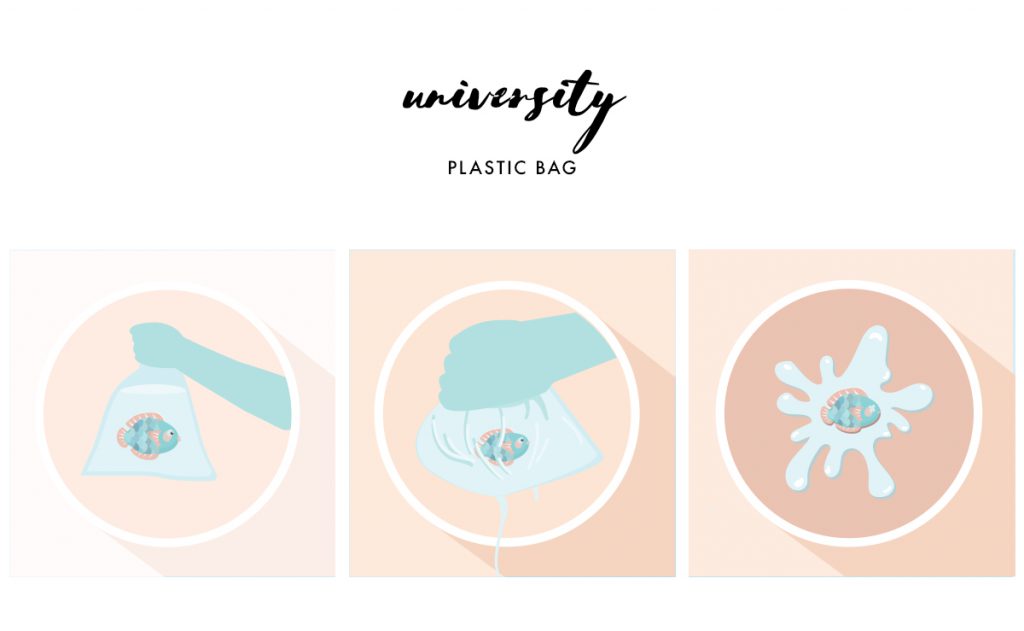 After JC, we go to a university based on our A Level Rank Points. And because in your university course everyone is literally doing the same thing as you, the fish tank gets even smaller now, to a plastic bag.

For the first row, it was based loosely off the story of the rainbow fish! 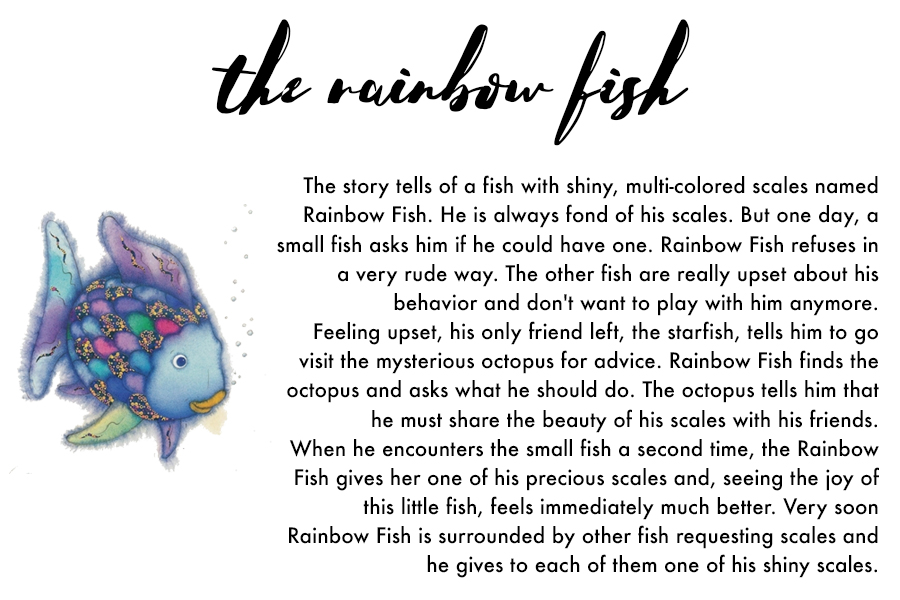 So me, having no friends and being lonely, I tried to seek company. And found it at the wrong place. Made ‘friends’ with bad company who not only were going around doing bad (illegal) stuff but they were also very hurtful with their words. Therefore there’s a jellyfish reaching out to me and stinging me, while I at the same time am reaching out to it because I craved company. The jellyfish stinging me is based off how the words of my ‘friends’ stung me. And in the last frame, it shows me being hurt/ a scar that their words/company left. These led to insecurity.

So insecure me in junior college never really asked people (teachers, friends) for help because I didn’t want to be viewed as stupid. Although I had very nice friends who helped me along the way, I never did make it a point to clarify all my doubts, which I had many (especially for Physics). Thus this led to me always being last in class (especially for Physics).

For the second frame, all the fish are in the middle because I wanted to show how everyone starts off with the same grades, same L1R5 (no one has any particular head start). My friends, while kind, were also very competitive! (closet muggers) but who’s to blame! Everyone wants to do well and be the best. I love them still <3

Fun  fact: there’s actually a little bandage on the fin where the scar was!

Also, there’s a visual continuation. Because my fin’s injured, I can’t swim as well as the others and hence I’m stuck at the back.

As a result of not so good grades (especially for Physics), I finally did something I would never have dared to otherwise – go to art school. Stepping in, I immediately compared myself with everyone around me. There were people with 3 years of experience, and there was me who didn’t even know how to use Illustrator. I had to start right from scratch, and I was very unconfident/ undetermined. So when crunch time (final assignments period), I was pretty much dead. There was a period where I didn’t (or should I say couldn’t) sleep a wink for four days because of a drawing submission that eventually took me a week to complete.

For the second frame (pressure), it shows a person squishing the plastic bag I am in – an accurate depiction of how I felt. It felt like time was just so compressed and I was just facing so much pressure from myself to produce quality work with so little time because I still had to learn how to use certain softwares.

I chose to work with muted pastel colours, because I love these colours!!!! I absolutely love muted pastels. Also, it seems to go very well with my theme! My theme is both playful, cute and lighthearted – which muted pastels suit!

My other extra fishes were monochromatic because I wanted to achieve a sense of harmony within my design. I also did not want my designs to look too messy with so many added elements of different colours.

Also, my jellyfish is red because red symbolises danger! And that pop of colour really adds to the overall look of my design.

For my last row, I made them all primarily warm colours because I wanted to show a distinguishable difference between underwater and air/land. And I chose warm colours so that the overall look of my design will again have harmony despite me changing colours.

Here’s every single frame so that you can view them in greater detail! 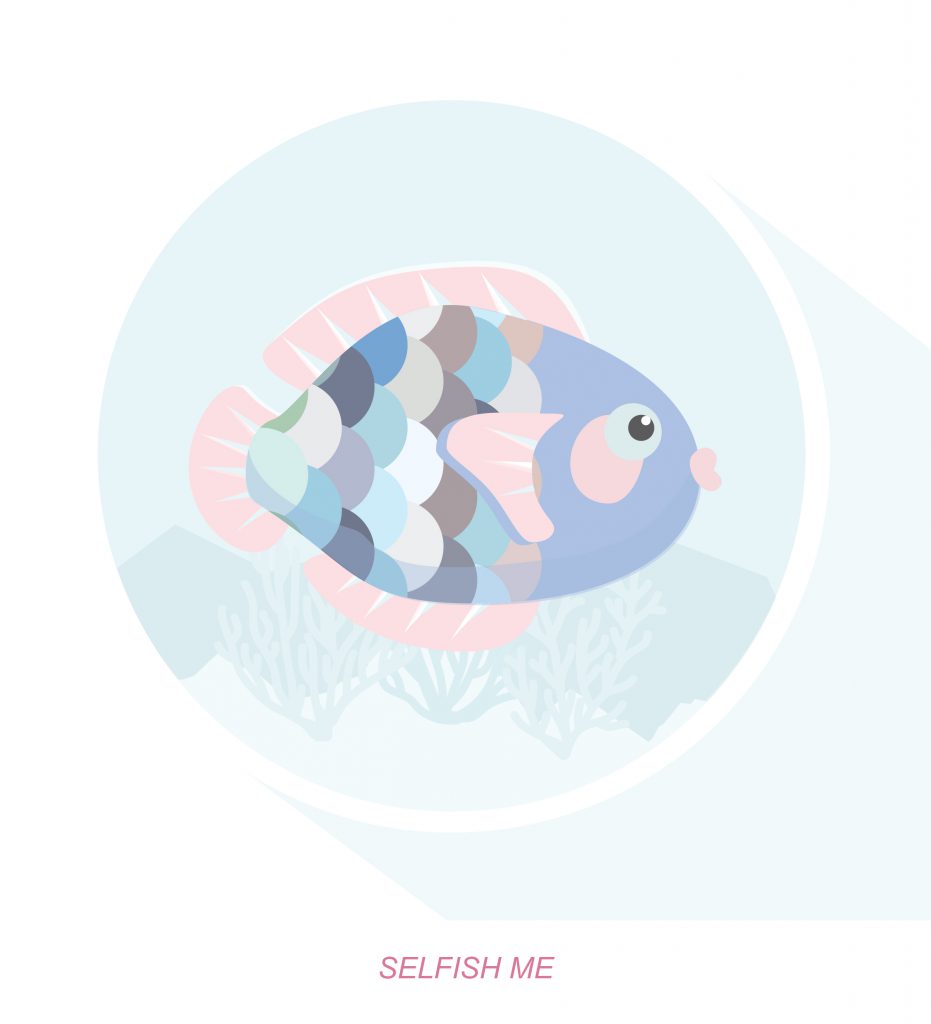 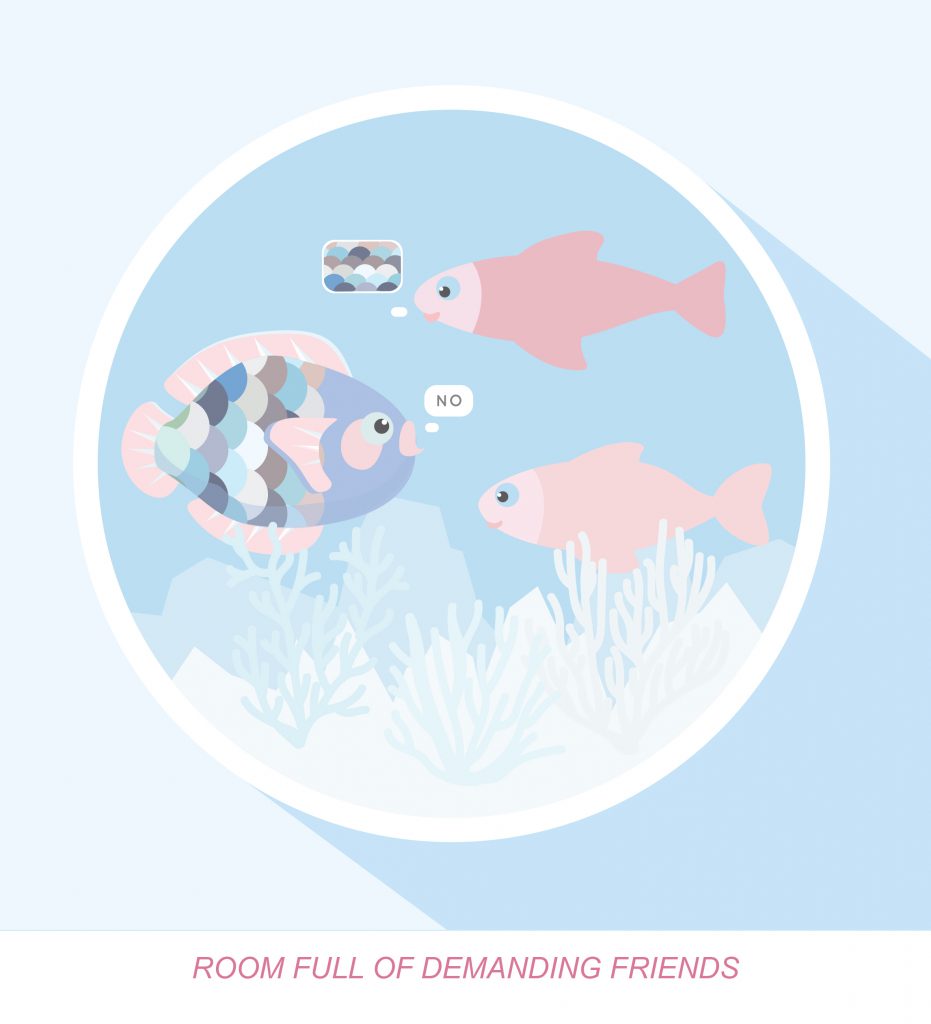 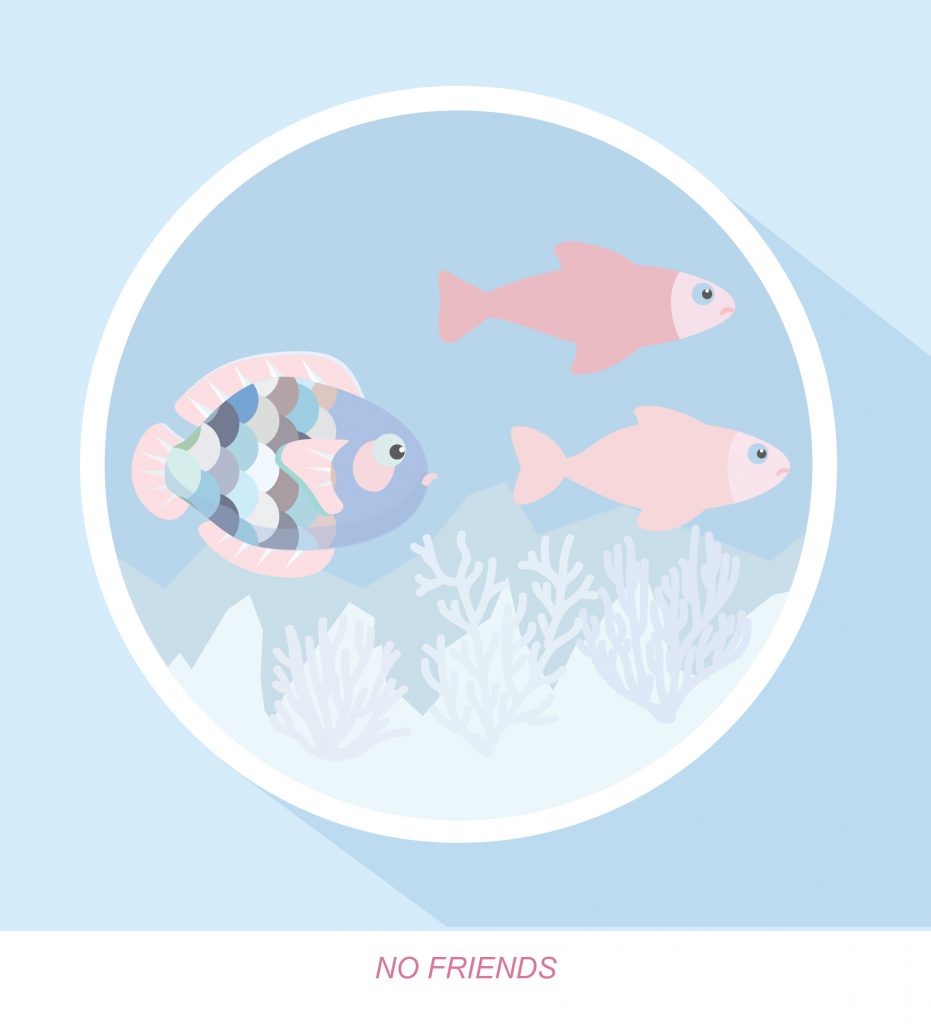 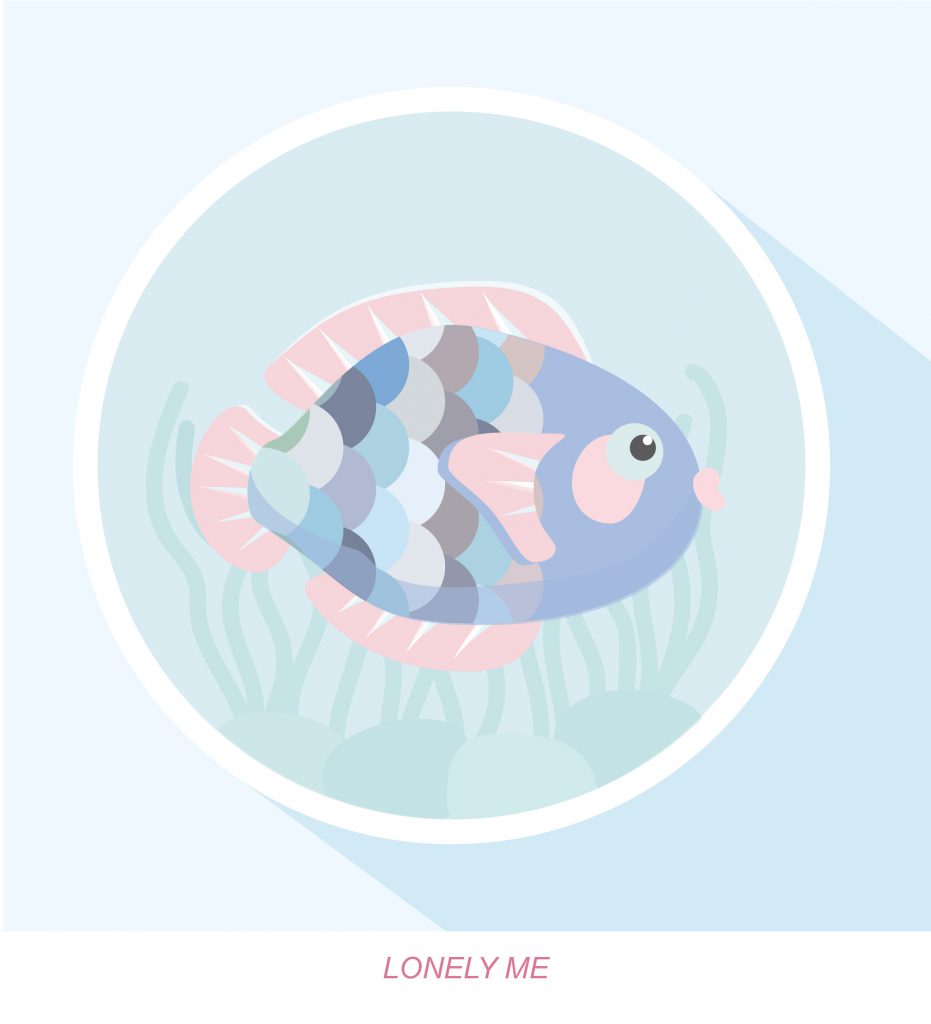 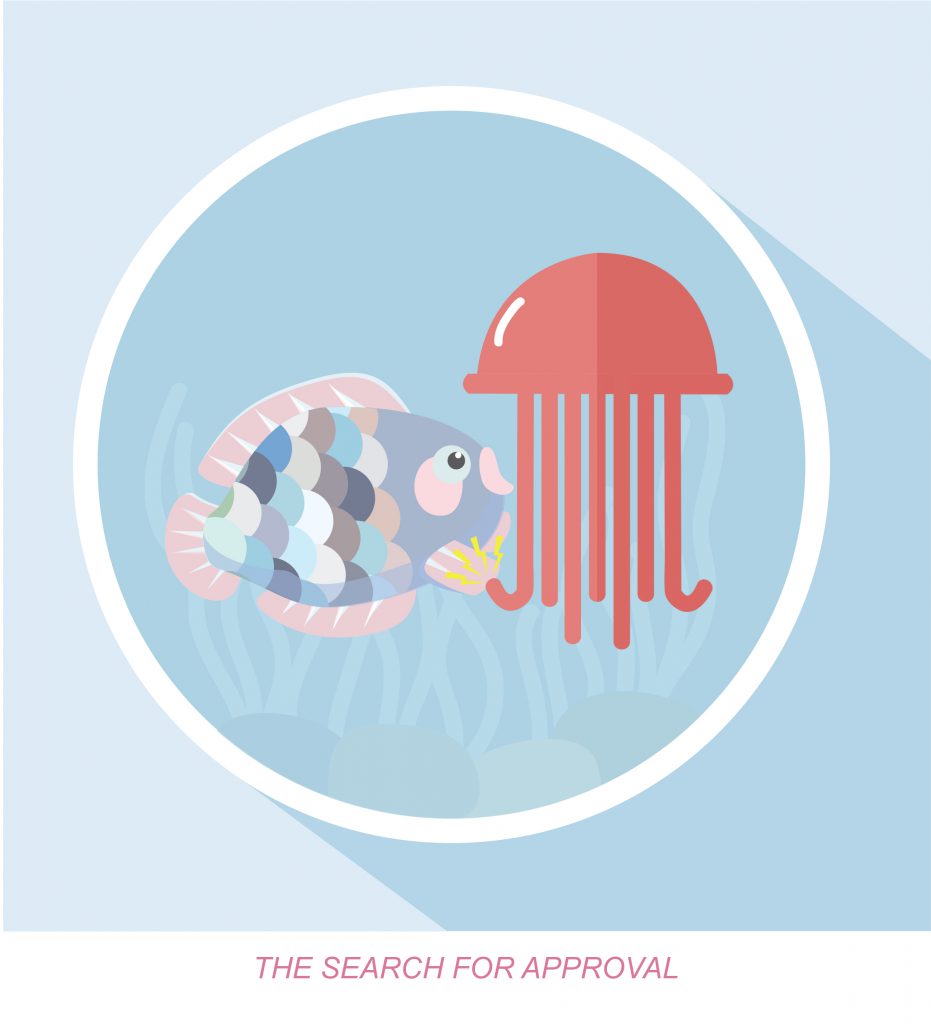 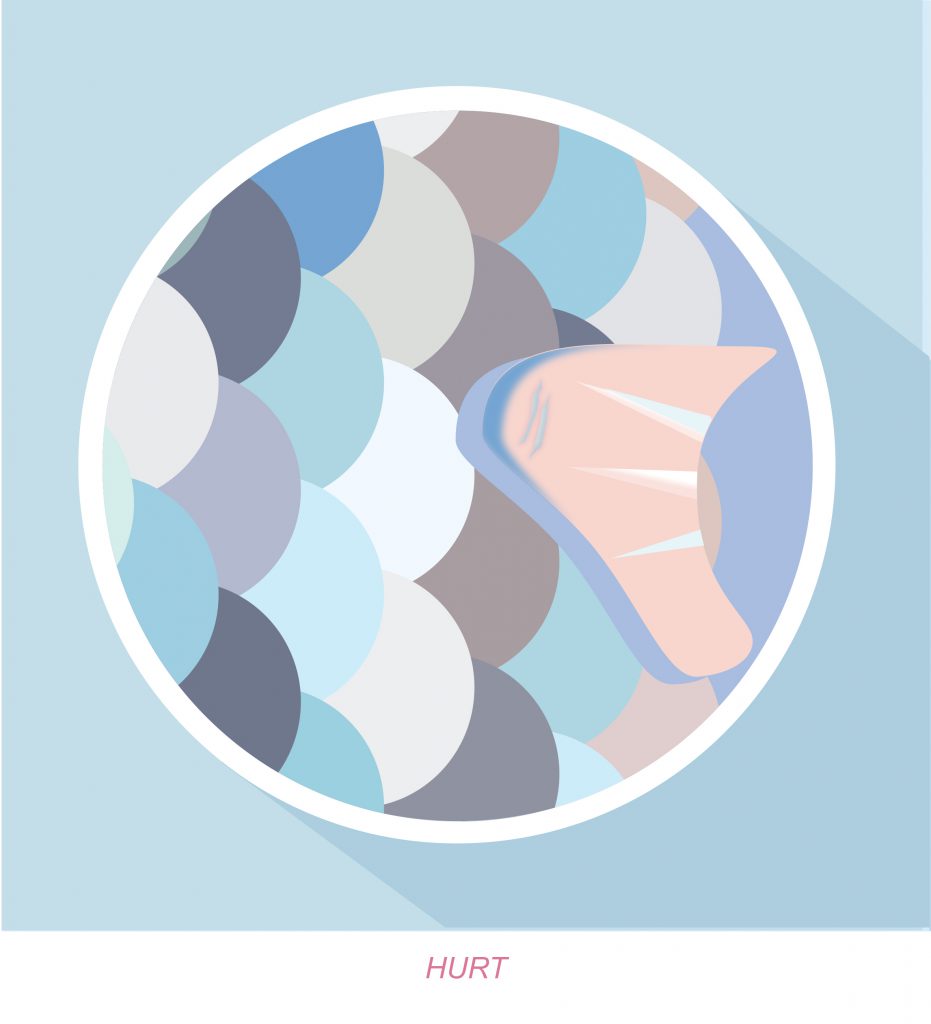 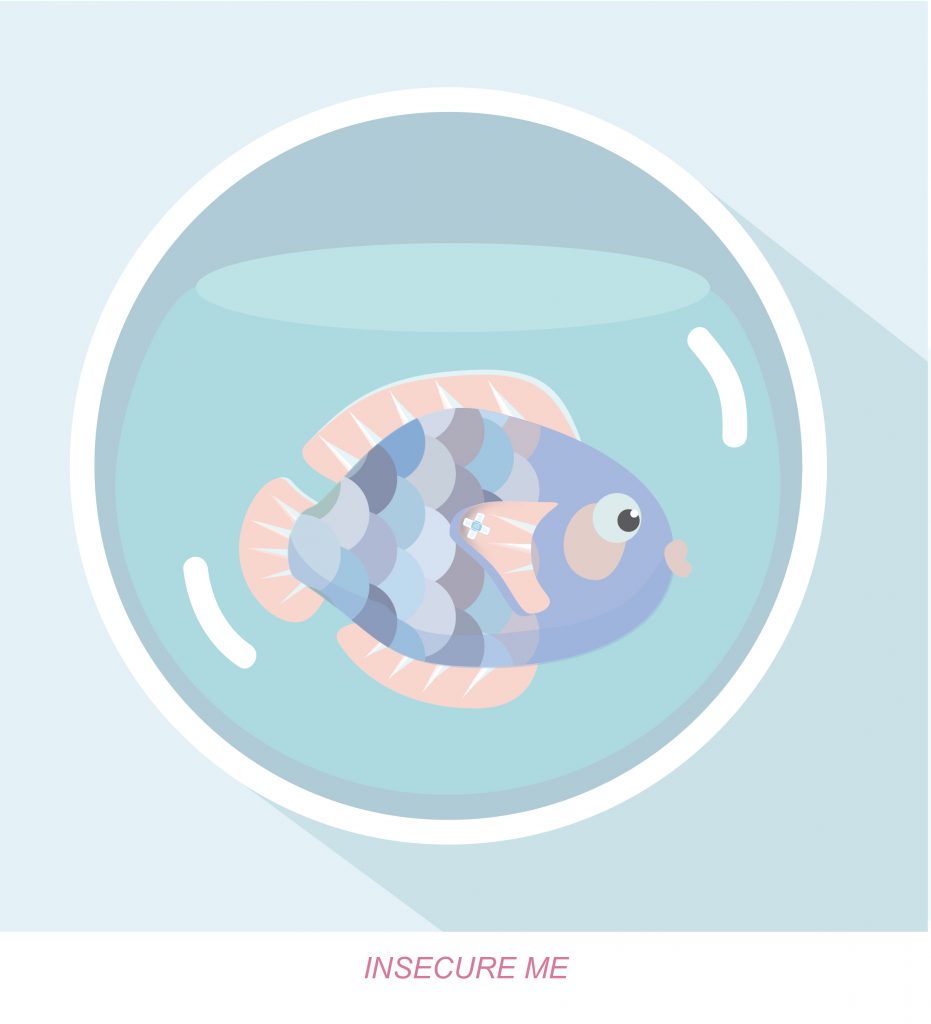 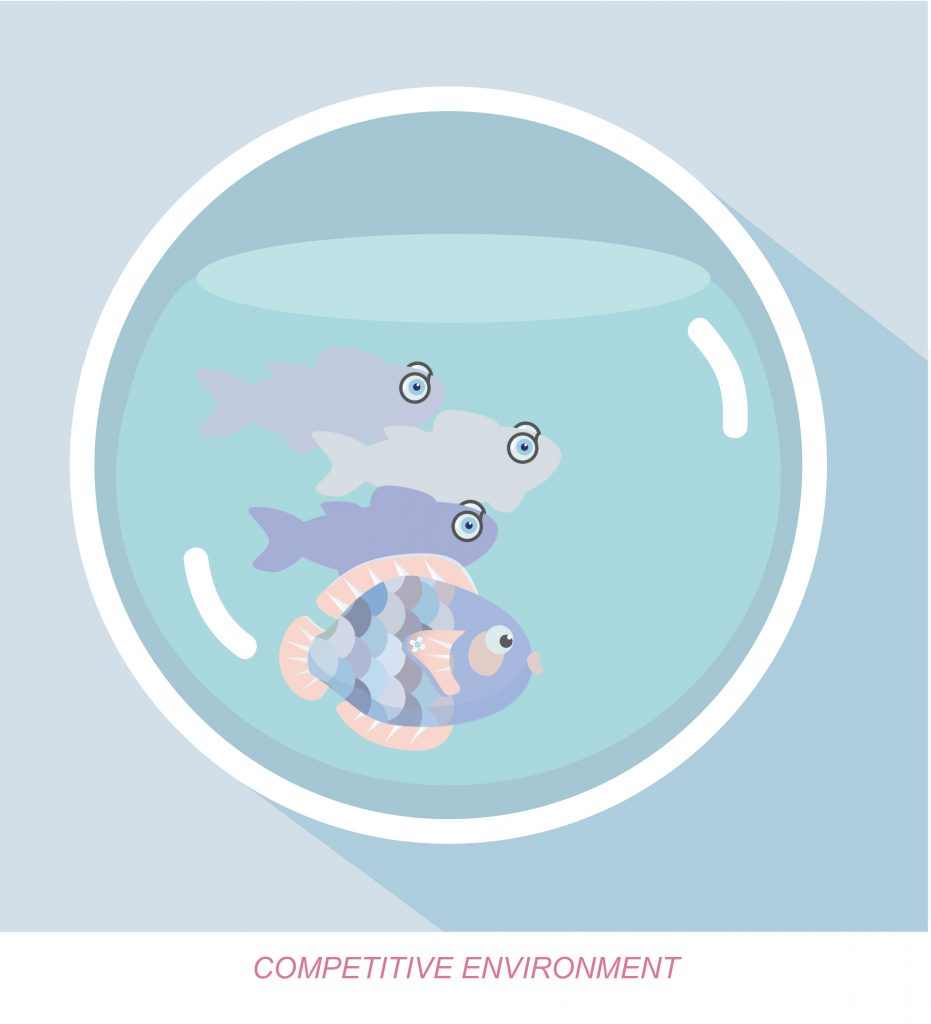 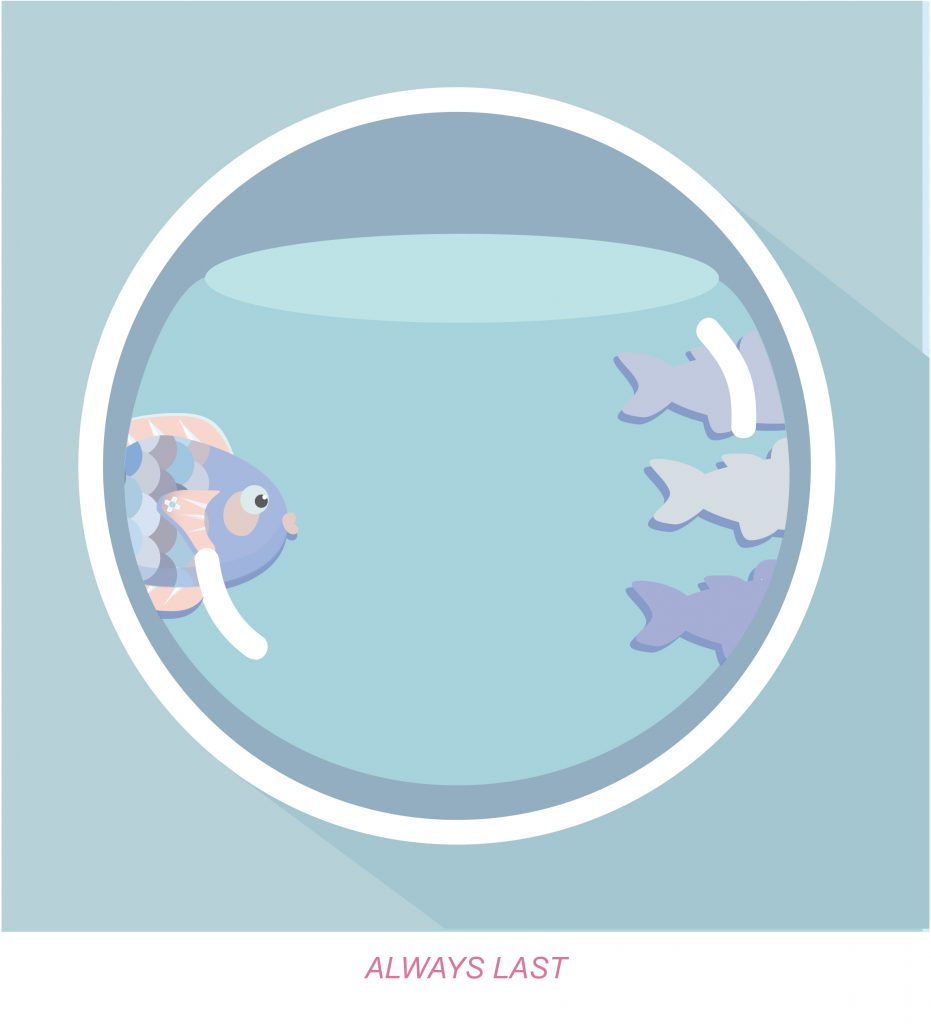 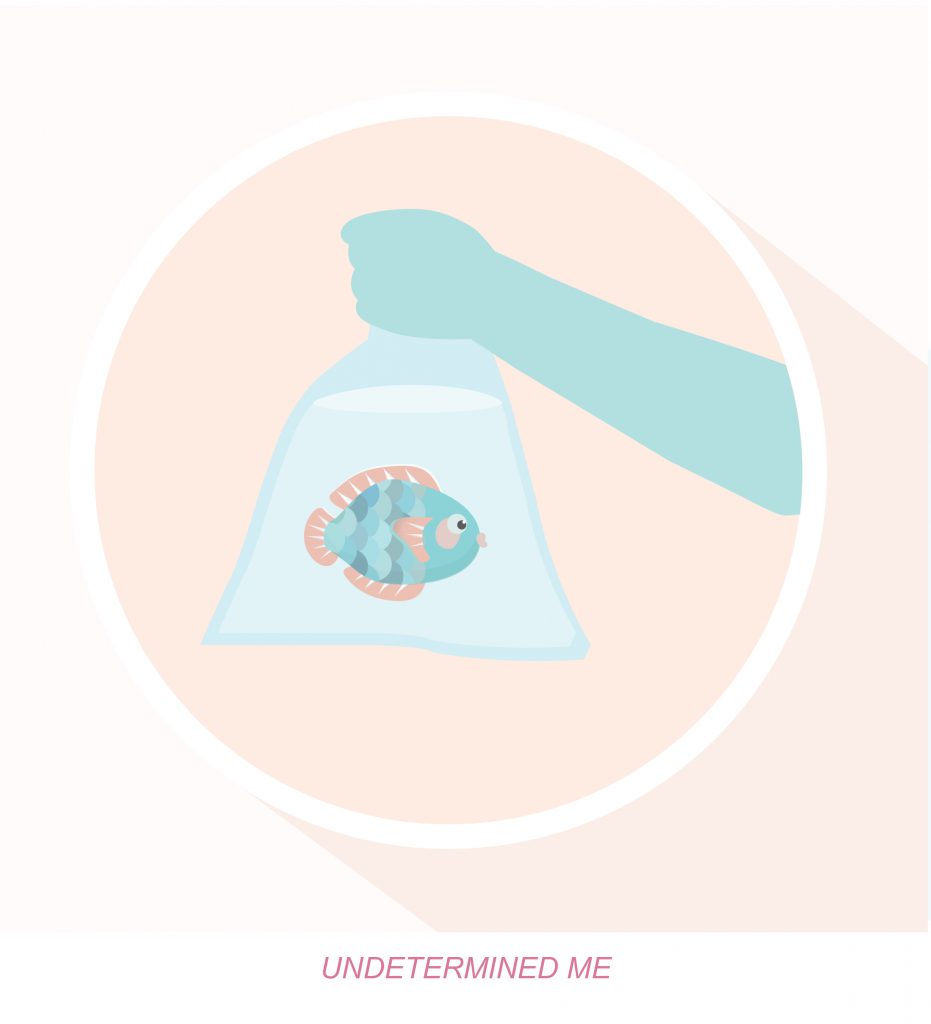 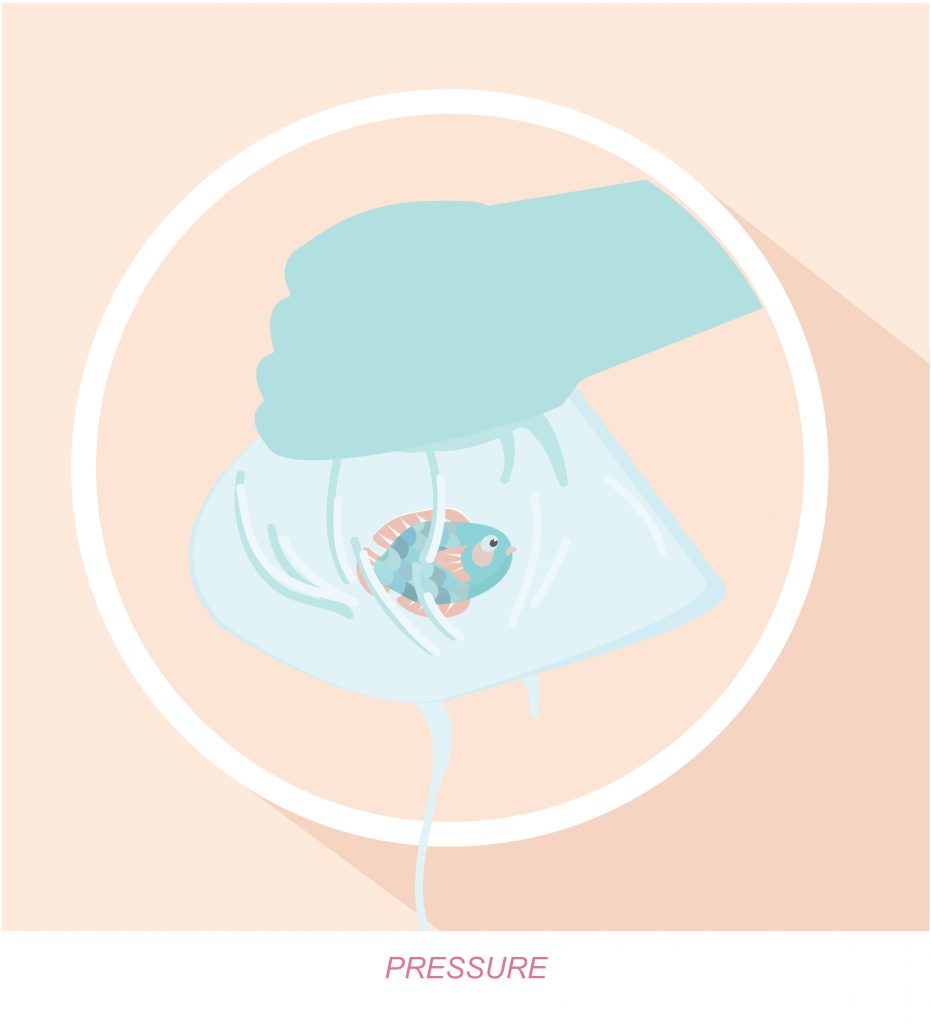 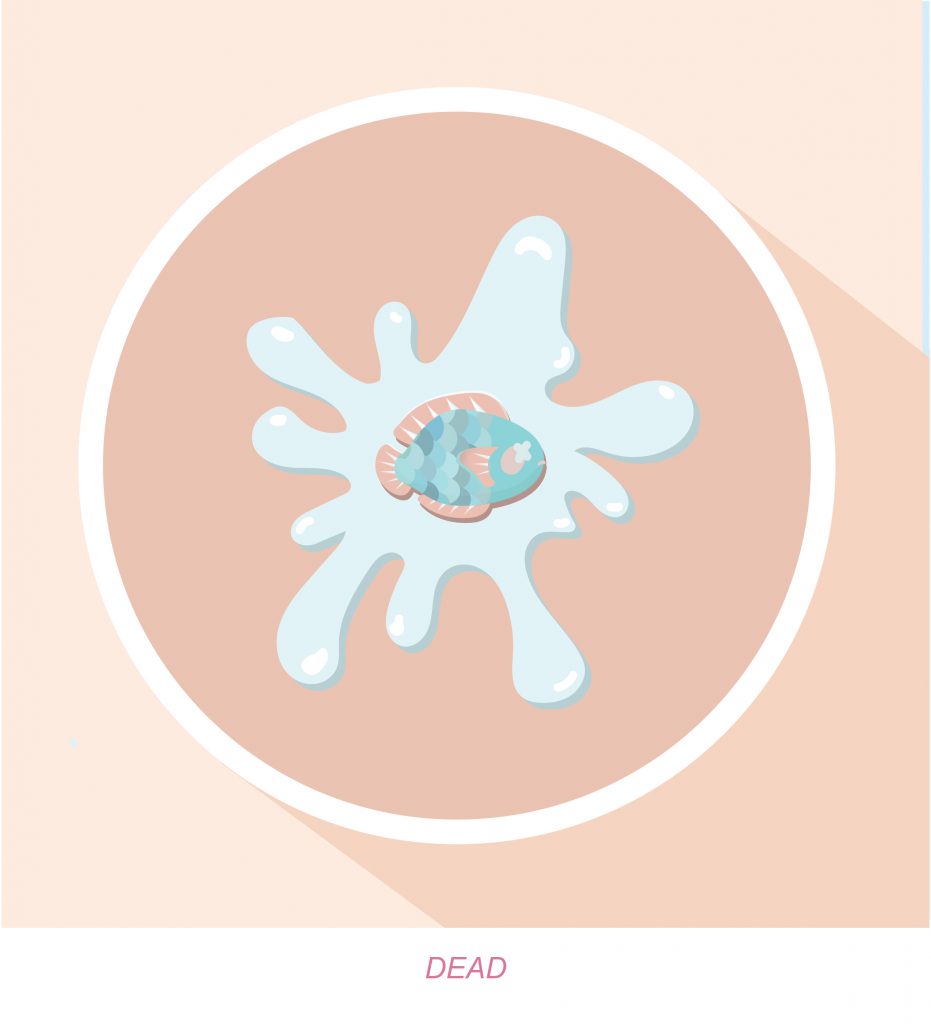