For my mid term project, I created a little fun project! My aim was to get users to create art using sound.

I remember back when I was doing the mid-term project I was really unfamiliar with Processing. I had a fairly hard time with the project but managed to produce something that I was proud of – at the time! Now looking back I can see how much I have improved 🙂

Going back to my idea, I wanted to make a way for users to create art using sound with my project!

Basically I found out that you could get Processing to take information from your laptop microphone (totally didn’t know about this till Chris told me about it) and I utilised that function!

Using the laptop’s built in microphone, it detects sound based on volume and produces different colours. For instance, the louder the sound the more blue the colour appeared.

Also, pressing the “Left <-” key on the keyboard pauses the entire thing! So if someone wishes to take a photograph of their colour combinations at that point they could. Pressing the “Right ->” key resumes the whole thing.

What needed to be adDressed

I had to go back my initial aim of users being able to create art using volume, and as such had to introduce a feature that could stop the programme (for instance if someone wished to save the particular pattern)

how i addressed them

Introduced a new pause function where if (keyCode == LEFT) pause = true, and if (keyCode == RIGHT) pause = false. I remember this was actually one of my biggest problems.. because I kept trying to make a “untrue” function, basically I wanted the opposite of true to happen… then it hit me an hour later that it’s just called ‘false’..! 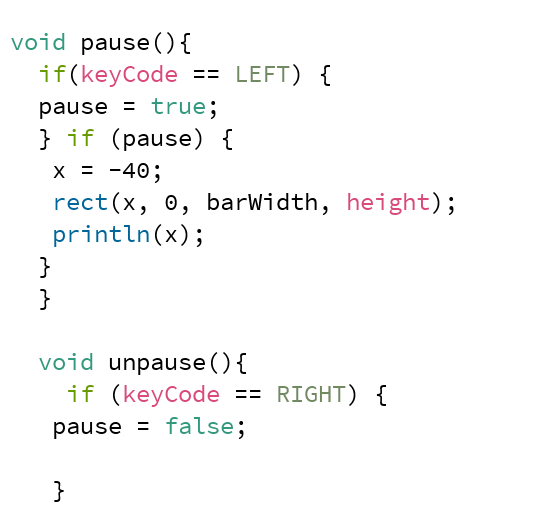 This was a fun and great project to start learning Processing with. I took things step by step and solved each problem as they arose. I was quite happy with the final product! I loveee colours!!! And this was a pretty cute 🙂 Anyway looking back I can see what I can improve on it, but I feel that at that point of the semester this was more or less the best I could do. But I’ve grown exponentially in terms of coding in Processing / Arduino over the course of the semester thanks to Corey and Lei’s help! Here’s what I did with my group for Interactive I that involved coding between Arduino and Processing.

Additionally Corey suggested that using the same idea still, I could play around with arrays. Guess that’s what I’ll be busy with this holidays!

Stay tuned for an upgraded version of Hue 🙂