Taking this idea of the ‘safe word’ into Julie and Mike’s sadomasochistic sexting situation, we must remember that the ‘safe emoji’ that they select in this case should be one that would be incompatible with the rest of the emojis presented.

With the help of a few websites, here’s a compilation of what these emojis actually really mean, especially during sexting. *Gasps* if a guy sends you a microphone, it doesn’t actually mean that he wants to serenade you

? perfect reply to a dick pic

? bathroom break, letting your partner know you have to take a bathroom break without breaking the flow of your sexual dialogue (according to complex)

While most of the emojis and their meanings as listed above are quite obviously sexual and plays well into the SM setting of resistance, submission and power, there are some that do quite blatantly stand out in the mix. The first emoji highlighted here is the pill emoji. Bright red and yellow, this pill is not an emoji commonly used in sexting, or to connote any deeper sexual meaning. Apart from the fact that it is an oblong-like shape that one could note is similar to that of other phallic symbols like the cucumber, as shown above, or the ubiquitous aubergine, my research on the internet has not shown its association to that of sexting. However, as writers on SM recommend (Cameron and Kulick, 2003), if the ‘safe word’ chosen should be unambiguous, the most appropriate safe emoji that Julie and Mike might select during SM sexting would be the smiling poop emoji.

Listed most by the internet as the emoji you should NEVER use while sexting, it is not hard to see how the use of the smiling poop emoji does not help you ooze sexuality and appeal. Particularly why it is such an inappropriate emoji to use during sexting that it could act as an outstanding ‘safe emoji’ during SM sexting and allow for the emoji to be interpreted clearly as “no, stop” and nothing else.

If a wide-eyed, beaming little poop doesn’t break your sexting streak, I don’t know what will.

What is LOCKER ROOM TALK??? 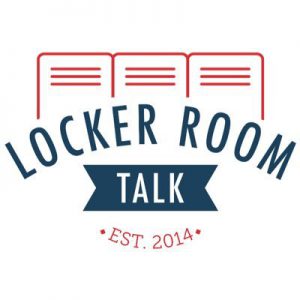 Entry 1: The crude, vulgar, offensive and often sexual trade of comments guys pass to each other, usually in high school locker rooms. Exists solely for the purpose of male comedy and is not meant to be taken seriously.

Entry 2: Any manner of conversation that polite society dictates be held privately – with small groups of like-minded, similarly gendered peers – due to its sexually charged language, situations or innuendos.

Entry 3: Racist, sexist, and crude language most men use towards immigrants, minorities, and women, when they are with their fellow male chauvinistic pigs.

In Cameron’s study (1997) of five fraternity brothers in a US college campus whose conversation in their fraternity house was recorded, a similar setting for ‘locker room talk’ is created, where these men are engaged in a regular, informal communal conversation, where no women are present, seemingly similar to the ‘high school locker room’ setting suggested by Entry 1 in Urban Dictionary. In this study, the men in the fraternity house center their discussion on the lack of masculinity of an ‘apparent gay guy’. By pointing out his inappropriate and insufficient masculinity rather than his actual sexual practices, the fraternity brothers highlight that to them, ‘gayness’ might be more to do with masculinity and gender rather than sexuality. This continues to show throughout the conversation where the fraternity brothers take extra precaution to mark their own masculinity, for example, by displaying ignorance about ‘gay ball etiquette’ and their dissociation from the gay group by using the pronoun ‘they’ when talking about them. This example of the fraternity brothers reaffirming their heterosexuality through talking about others lack of masculinity, suggests and reaffirms the presence of their own and is similar to Urban Dictionary’s Entry 1 which suggests the crude, vulgar and offensive sexual trade of comments, which the boys pass to each other in high school locker rooms. However, I do not agree with the fact that these comments are made solely for male comedy and is not to be taken seriously. By the trade  of comments made about others (other men or even women) who are not present, the men relate to each other and also reinforce the social bonds among themselves, and this engagement in homosocial bonding involves explicit denial of homosexuality. Therefore, heterosexual talk here, in the way of asserting their gender and masculinity is also a means for constructing homosocial relationships among these men.

Entry 2 by Urban Dictionary seems to be different from the first entry in the way that it specifies the polite society dictate the conversation be held privately. This seems to suggest that this ‘locker room talk’ may hold a more functional purpose and this idea is supported by an ethnographic study of hostess clubs in Japan (Allison, 1994). Based on the study, hostesses are not employed to have sex with male guests but rather to smooth the conversational path between the men who go to the clubs. Therefore, the hostesses role here is to make the men feel more masculine and powerful through sexual talk. This shows that this ‘locker room talk’ in this setting is actually to allow men to related to each other in an informal, nonhierarchical way. With the hostess as the topic that all the men can agree on, men can form better homosocial bonds, reinforcing their dominance as males.

Although the examples in our text suggest that the point of ‘locker room talk’ seems to be to affirm males heterosexual identities through heterosexual talk and also promote homosocial relationships with each other, we cannot ignore the fact that like what Entry 3 on urban dictionary states, this is done by ‘racist, sexist and crude language most men use towards immigrants, minorities and women’. This is extremely true because as the examples have shown, even if ‘locker room talk’ serves a functional purpose, it does so at the expense of using and degrading women (as shown in the Tokyo hostess study) and also minorities, such as less masculine men (as shown in the Fraternity house study).