Last week, I was instructed to bring along a few mark making tools to class and i decided on the several items shown below, which includes a spray bottle, a 20 cents coin, a leaf, a styrofoam box and a plastic spoon.

We were provided with newspaper and black blocking ink to play around with and the first item i explored was the styrofoam box. I tore the box into random pieces to create more texture and these were the resulting effect.

The top piece was done using the flatter surface of the styrofoam to create thick and wavy marks that taper off at the end. However, the marks created were inconsistent due to the varying  pressure applied and varying amount of ink. The bottom piece was done more systematically with the rigged edge of the styrofoam to form diagonal strokes. The strokes are spaced out quite evenly and can appear sparse as a large component of the paper peaked through.

After experimenting with the styrofoam, i picked up the ordinary looking plastic spoon. The end result is a mess as the plastic spoon was rigid and hard to manipulate. The flat side of the spoon resulted in messy blops of ink. While the rigged side made harsh and short lines. I also tried using the spoon to scope up the ink and splatter them randomly onto the paper which resulted in a paint spattering effect. 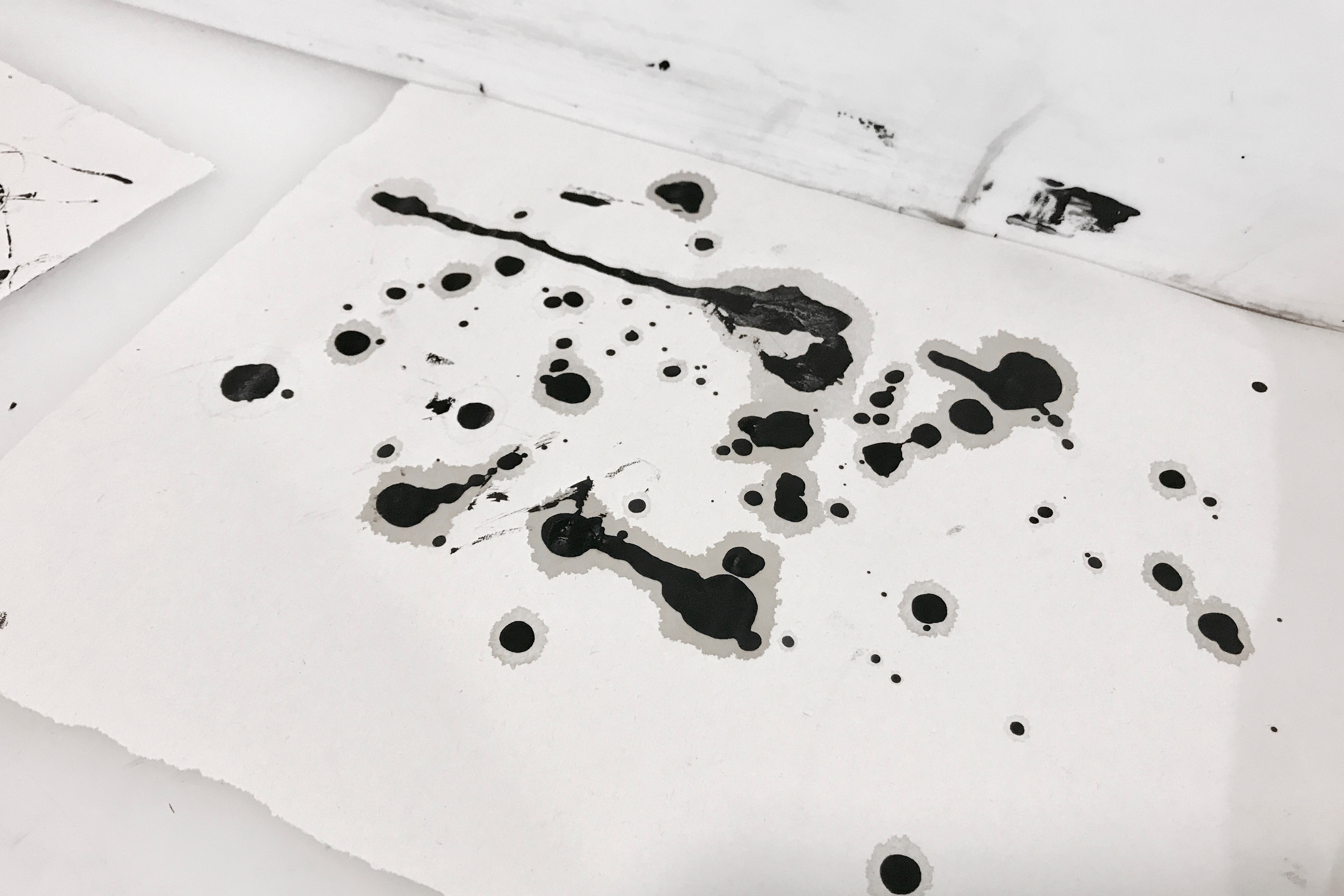 The experimentation with the 20 cents coin was far more interesting.  My initial idea was just to dip the coin into the ink and slap it onto the paper. That resulted in the bubble-like shapes shown below. Then i decided to roll the coin around the paper and let it leave it’s own trail. Most of the time, the coin will roll spirally before it comes to a stop and flop down onto the paper. Therefore, thin spiral lines were observed.

Additionally, I also played with a  spray bottle and a leaf.  I think that the effect resulted from the bottle spray was similar to the spoon. However, using a spray bottle gave me more control than the spoon and the dots formed were considerably smaller and more refined. Streaks of ink can be created by tilting the paper in all directions. The leaf was different from the rest of the mark making tools as it has a pattern of its own. After stamping the leaf on the paper, the shape and structure of the leaf was observed.

Overall, i had a lot of fun doing this even though the process was super messy!

This week i wanted to explore more on the texture by using different medium and objects. I brought out several items to experiment with and they are a bottle of white glue, pouring medium, black & white acrylic paint, watercolor paint, charcoal, clay, fish line, masking tape and some weeds. I also bought white, black and silver paper for variety.

1. Using charcoal (top) I was able to create a hazy background after smudging it with my fingers and also dark precised lines.

2. I pasted masking tapes on silver paper (bottom) but it did not give me the effect i was expecting. The surface look rather flat so i splatter some ink on it to see if it will do any good. Apparently it didn’t.

3. Watercolor with black pen (top) has a very contrasting effect. I think that the flatness of the watercolor paint compliments well with the precision strokes of the pen.

5. I used black and white acrylic on silver paper then folded the paper into half to play with symmetry. I think this technique works better with colors.

6. Watercolor was being drizzled onto white paper from top down to create dripping effect.

7. I used white acrylic on black paper then folded the paper into half to play with symmetry. I think this technique works better with colors.

8. I used white glue and drizzled it onto black paper then folded the paper into half to play with symmetry. I think the effect was pretty interesting but cannot be seen at certain angle (refer to next picture).

Close up of 8. White glue on black paper. 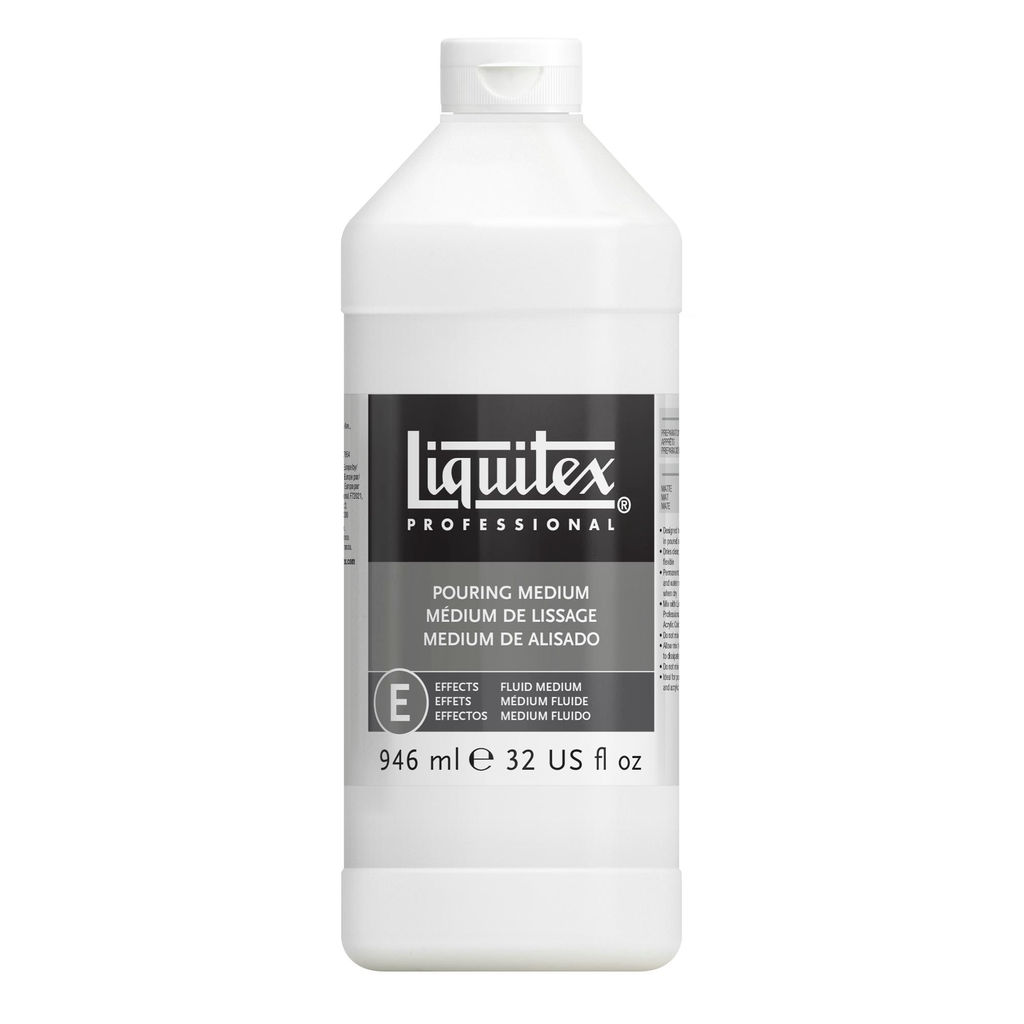 After much exploration, I have finally finalize on my 6 emotions. Some marking making ideas employed here are new while some were previously explored.

1. Confused
• Confused is being uncertain of what to do in a situation where there are a lot of activities going on
• It is a sense of being overwhelmed
• I used black threads to create messy and swirling patterns that has no clear directions
• The threads are also tangled together to show confusion

2. Exhausted
• Exhaustion is a depletion of positive energy and feeling restless
• I used pouring medium to create the marbling effect
• The picture is very top heavy and thus looks as though it is going to collapse
• The general flow of the paint is downwards
• The amount of paint was depleted slowly as it reaches the bottom of the paper to show depletion of energy

3. Creative
• Creative is a continuous flow of ideas that pops up randomly
• I used bubbles to create these circular patterns
• The bubbles were overlapping one another showing that ideas are interconnected
• The bubbles are present in different sizes and values
• It looks like ideas being developed as the circles grow in size

5. Composed
• Composure is being calm and stable and in control
• Not affected by the surroundings
• I used a fat paint brush to create thick and precise strokes lines
• The lines are constructed vertically and horizontally to represent calmness
• They are overlapping each other, the repetition further shoes a sense of stability

6. Sensual
• Sensual is the feeling of pleasure and excitement that are aroused by physical sensation
•  I choose to use white pen to draw one continuous, undulating line
•  It looks like its flowing and dancing to a physical stimulus

This project is a great eye opening experience for me as it allowed me to venture more into abstract art. It also allowed me to see things in different perspective and utilize objects I have at hand.

The most important thing I have learned during the course of this project is that art is a very deliberate notion. When doing any form of art, it is crucial for us to analyse all the elements and components that we want to include in our illustrations.