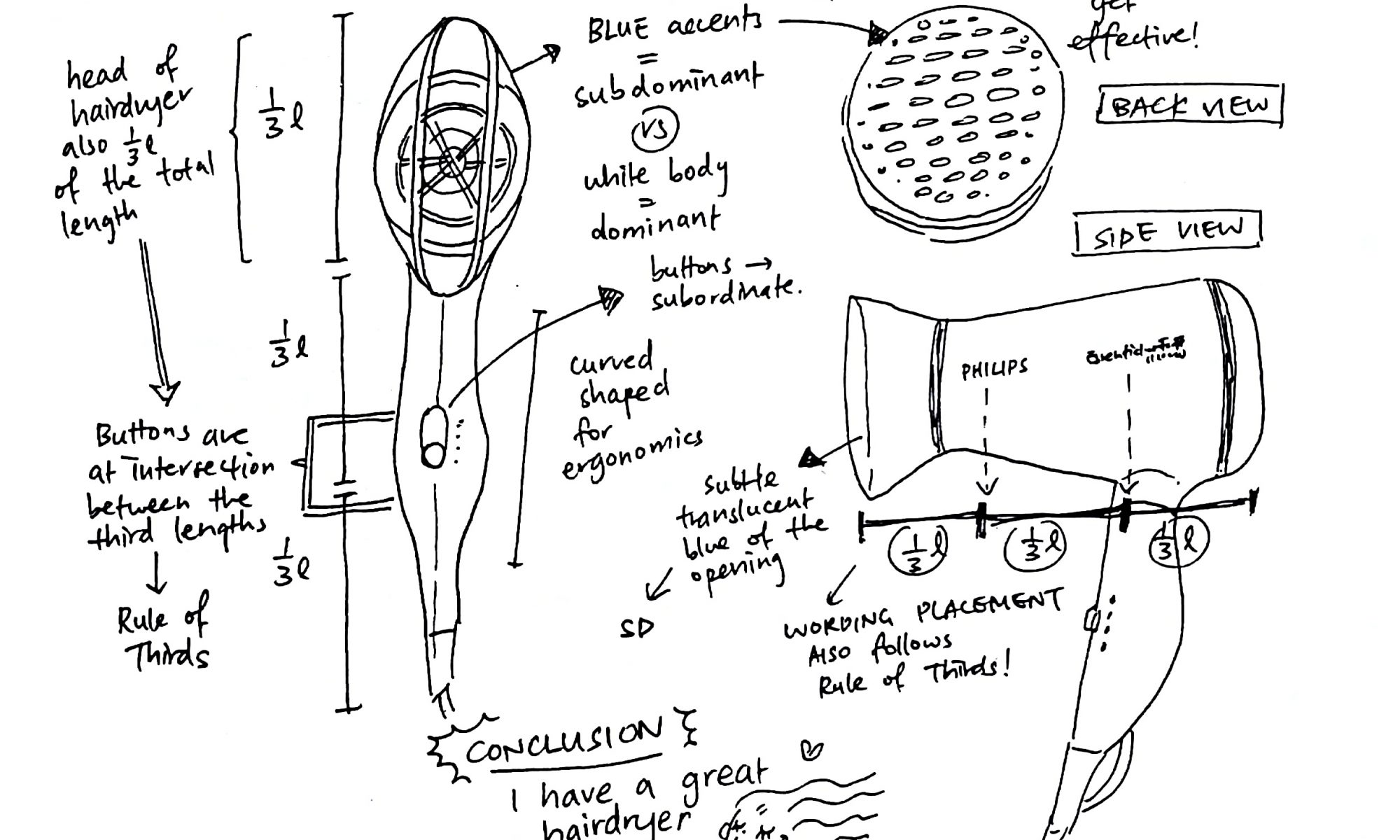 Hello! This is Niki making her first Foundation 3D post about her wonderful hairdryer. Have some pics first:

No, they weren’t edited to make it less obvious I took it on my bed in hall lol?? Everything was just that white. Anyway, I took it on a whim the night before the class because it seemed to be the most interestingly-shaped thing in my room which was not a high bar considering how dull my room is :// But the more I examined it after Cheryl mentioned things during class, the more interesting I found it!! By the time my presentation was over my hairdryer was the star of the room for like a few cool seconds. Here’s my 2D sketch analysis of my hairdryer:

Something super cool about the hairdryer is also the fact that it has a foldable body so that it can be compacted for travel and portability! It looks like this after folding it completely:

I don’t think the dominant or the subdominant relationship changes when it’s in this state, but I do feel that since the button that was subordinate is hidden when the body is folded in, more attention is drawn to the bolts at the side, so they replace the button as the subordinate. However, from the opposing side of the hairdryer there aren’t any bolts, so my theory isn’t very strong haha. If it were viewed from the opposing side I think the translucent blue of mouth of the hairdryer becomes the subordinate. Which I think is interesting because even though it takes up more area compared to the blue stripes, the blue stripes still catch your attention more probably because they have brighter colours.

Overall, I think the blue-white scheme of the hairdryer was a good idea! Seems a bit basic but I think this colour scheme is something that resonates a feeling of no-frills reliability and usefulness. There’s also a lot of ‘Rule of Thirds’ going on in the hair dryer which is probably why the overall design of the hairdryer is pleasing to look at.  It makes me want to dry my already dry hair. I also really like the attention to detail, like making the inside of the hairdryer blue too even though no one ever thinks of looking inside a hairdryer, and the small loop at the end of the hairdryer so that I can hang it up if I want to! I always think that all the little things really make or break the big thing.

Next up I’ll need to work on my 3D Sketch Model about the theme ‘Complementary’. I’m still stumped but I guess I gotta think out of the BOX AHAHAH get it GET IT sorry its 1am and I’m tired from a day of work. See y’all (whoever is reading this………..) next post!