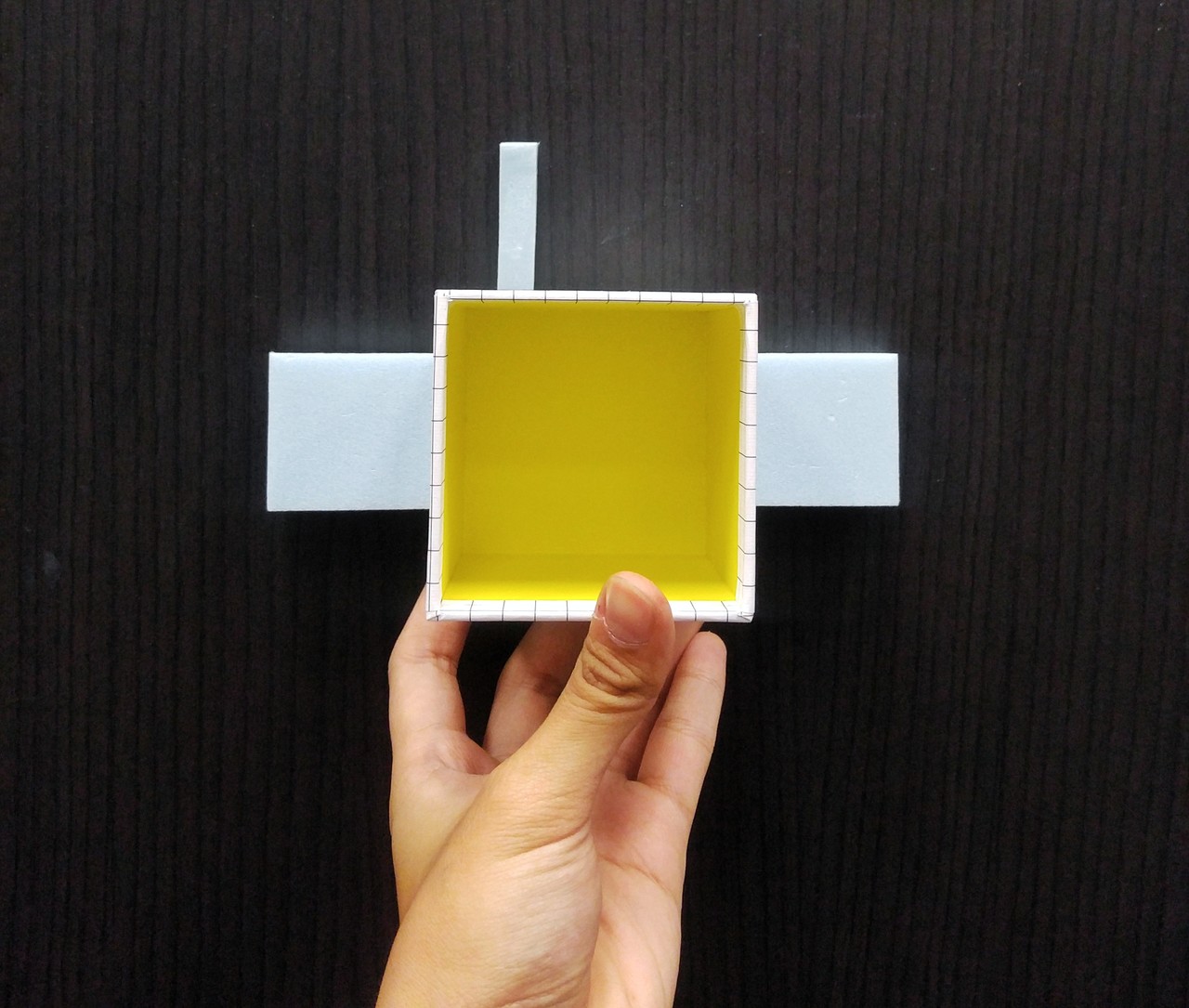 So after a few weeks I’ve finally settled on  another look for my Pandora’s Box(es?) with the theme ‘Complementary’! After Cheryl introduced us to the concepts of wedging, cradling and piercing, I found that it was easier to come up with more vivid and interesting ideas and orientations for the boxes.

For this sketch model, I decided to go with the new technique that was introduced called wedging, where a section of a block is cut off such that the curve/corners of another box fit nicely into it. As you can see from the first and second pictures, I cut off a section of the blue foam so that it can fit onto the orange Nike shoe box! I went with this arrangement after Cheryl suggested that perhaps I could try to bring in an element of ‘levitation’ into the composition, and so I tried to stray away from the generic idea of ‘symmetry’ to convey complements. The blue strip is supporting the bigger white box to show the idea of harmony, which is further supported by the Nike box, to try to convey the idea of harmony despite differences.

I think the relationships between the 3 boxes are fairly easy to recognise – the orange Nike box is the dominant, the smaller white box on top is the subdominant, whereas the thin blue strip sticking out is the subordinate. Also, to go further with the idea of ‘complementary’, I arranged the boxes according to the Rule of Thirds, as shown here:

I hope I managed to convey a sense of wonder with the added ‘levitation’ that goes together with the harmonious arrangement of the boxes to create a model that is ‘complementary!’

My first model containing the same white box had all the boxes flush against each other on one side, resulting in taking away one axis and reducing the potential for a more dynamic model. So I decided to do away with the initial idea of playing with the colours of the boxes and focused more on creating an interesting arrangement of boxes. To bring about a more common idea of complementary, I decided to bring in an order of large, medium, followed by small into the model, with the biggest box on the bottom and the smallest one on the top. Thus, the relationships between the boxes are fairly easy to see, with the white grid box being the dominant, the smaller plank of foam the subdominant, and the thinnest piece the subordinate. With the varying sixes and dimensions of the boxes, there is a sense of having a cluster of contrasting volumes that makes the model more dynamic to look at!

I also incorporated the Rule of Thirds into the model to bring in a sense of harmony:

Hopefully I’ll be able to get feedback from Cheryl about the models and come up with a good final model!