[ FEEDBACK FROM JOY AND PEERS ]

The presentation time was 5 minutes long for the whole thing but I guess I really took too long for the whole thing as I used up more than 6 minutes explaining every detail of the process of how I created my lines! Like I felt that was the part that was the most engaging and interesting about my work — the fact that I tried to physically incorporate something from Tokyu Hands in every one of my lines. However Joy mentioned that I focused so much on the process that I almost totally neglected to focus on the visual aspect of the lines itself, like the descriptions of gradients and tonal values and textures, and how they translated themselves into the emotions. Whoops :’) I hope my attempt at organising my thoughts and explanations on the previous pages were enough to make up for the lack of explanation! Sorry Joy-sensei. 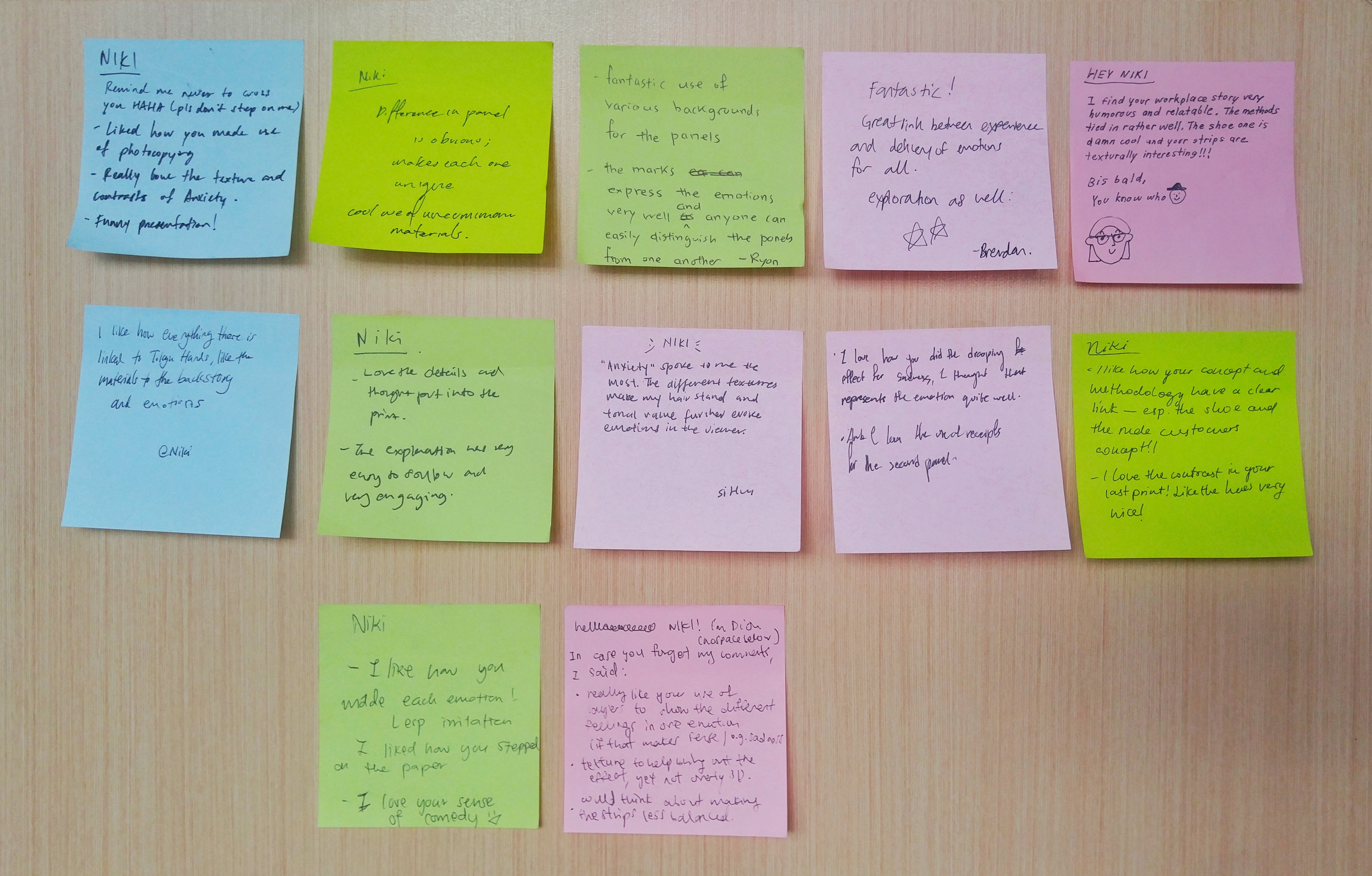 But overall, a lot of my classmates commended me on my exploration of materials, and how the different layers and textures helped to bring out the emotions. Dion said that they helped to bring out the effect without being overly 3D-ish and I thought that was quite insightful, as I like my pieces to have an dimensional effect while remaining on a flat surface. I think ‘Anxiety’ was quite well-received as many commented on that, and my favourite comment was Si Hui where she said that the textures made her “hair stand” and I thought the fact that looking at my piece could evoke something in the viewer made me really happy HAHA

However, Dion also commented that she thought my pieces could be more imbalanced, and I do agree that I maybe should’ve thought to put impact in certain areas of my pieces. Next time I shall look into that 🙂

Overall, I found that in the beginning when I was simply exploring and testing out different materials and making basic prints I wasn’t too excited about it. Sure it was fun, but after a while it became kind of repetitive. However, once I got my theme down and my lines started materialising and I could finally put together my final work, I felt like the process was actually quite fun, and it was really worthwhile in the end to see the final pieces all put together.

It was really fun working with friends in the Studio and getting to know other people from other classes as well! We gave each other feedback on the emotions and helped each other by suggesting different methods to make their lines. However spending the whole weekend in the Studio was pretty exhausting. But I’ll probably have to get used to that right HAHAH. The experience was really great, but gotta look onwards to PROJECT TWO! (I thought it would be about Forrest Gump but it was not and I got disappointed because Forrest Gump is one my favourite movies :()