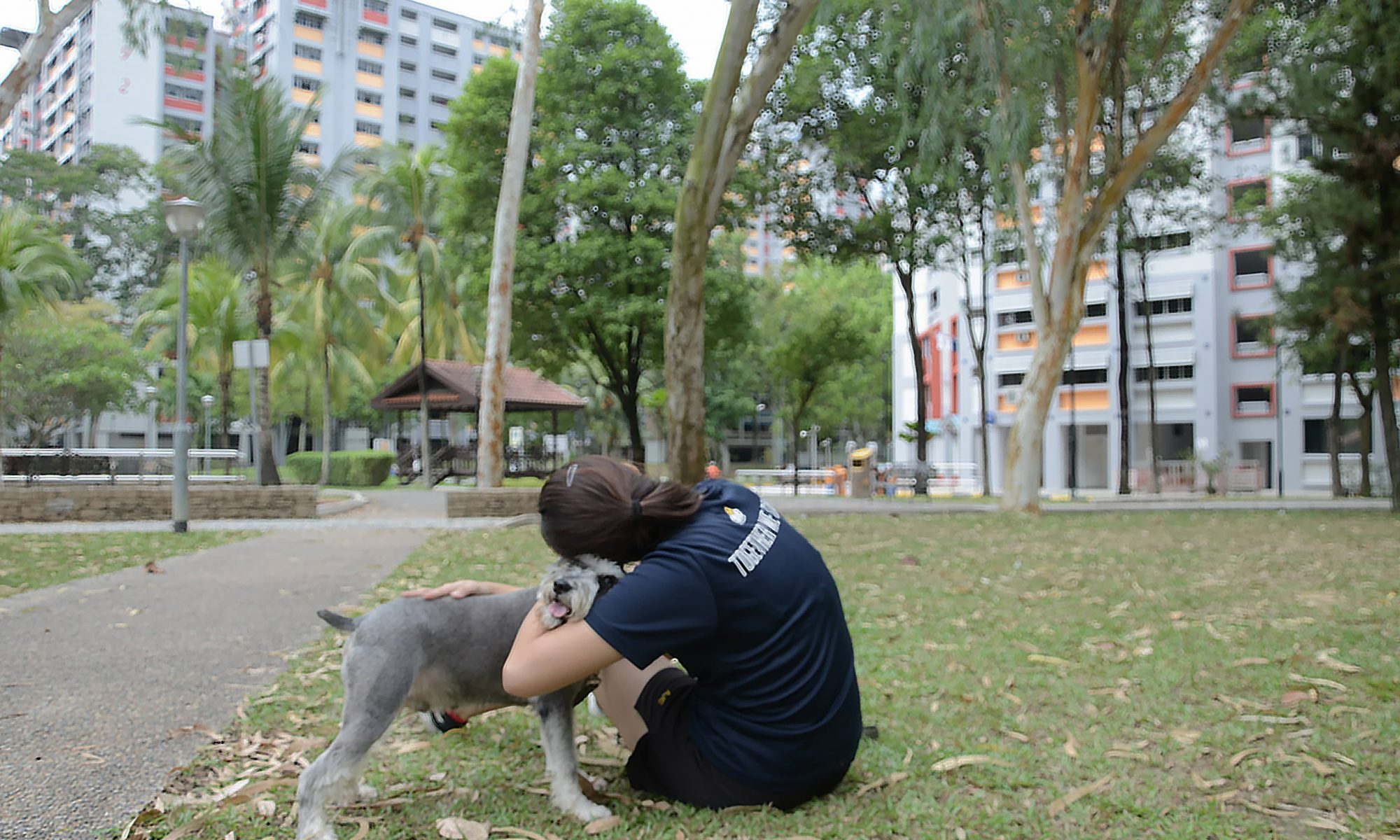 So!! This was the first photo I decided to put in the series. Not really any significance why it was the first photo – just that I decided to put the portrait photos from the series on the left and right. It was taken with my friend’s Schnauzer, Happy, when I went for a walk with him on a Sunday afternoon. No secret that I LOVE DOGS. You’ll soon realise throughout my assignment that I am a simple girl with a simple mind. So we took a bunch of shots of me playing/resting with Happy. The problem was that the images looked fine on the Nikon DSLR (which I loaned from the school) but when I went home and loaded them onto the computer I realised almost all of the shots were blurry to a certain extent……..so I had to use some deblurring software to make the blurriness less evident. 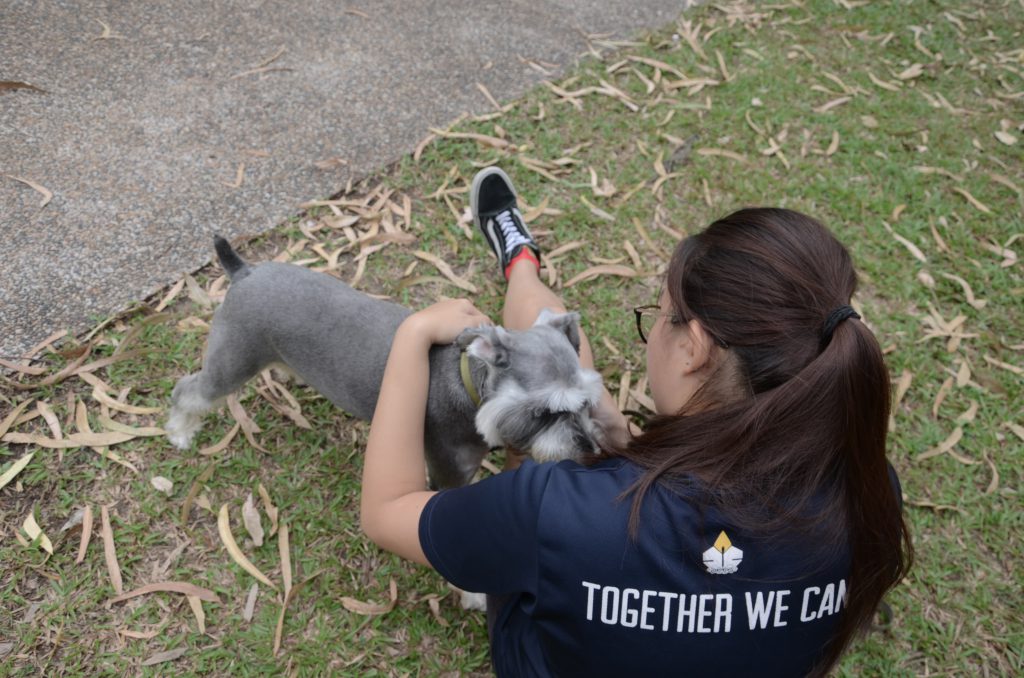 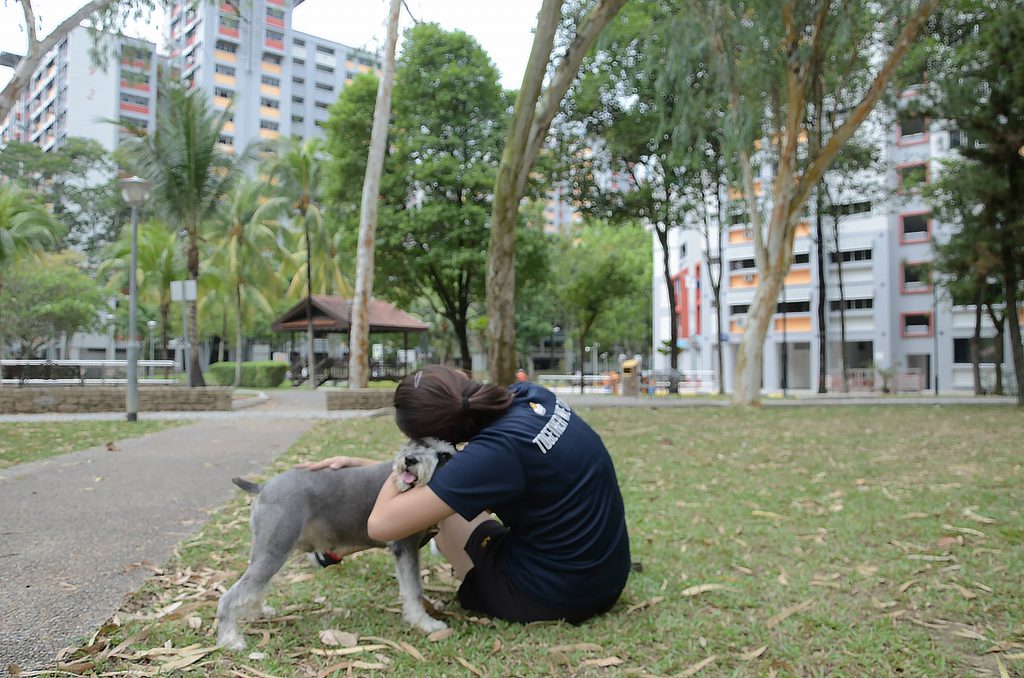 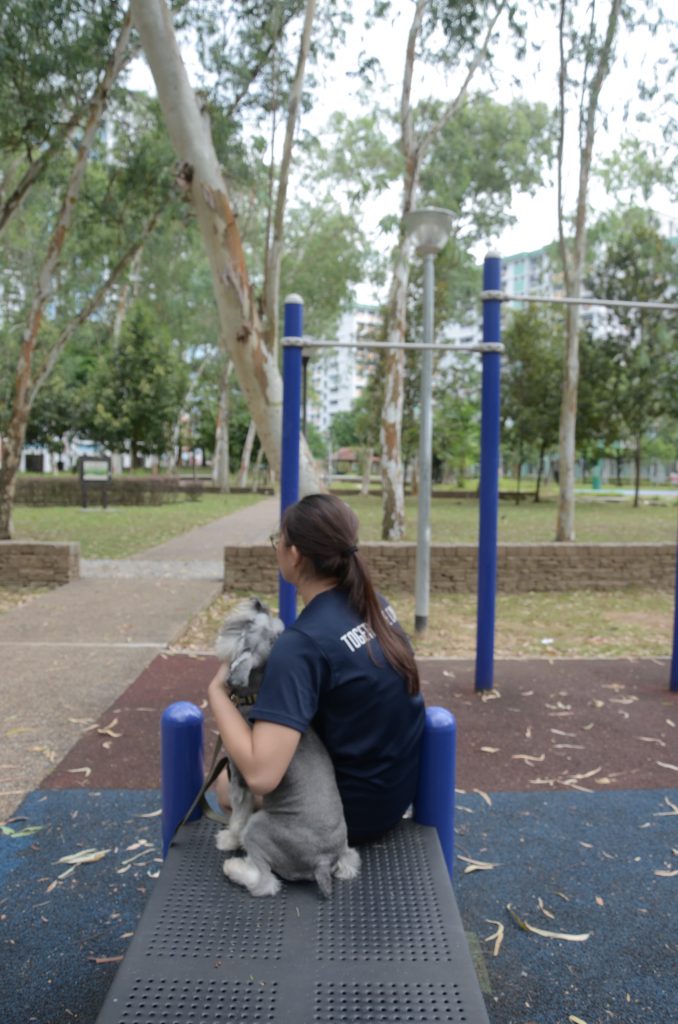 I feel so happy looking at these hehe. Generally I decided to go for a eye-level shot because I wanted to convey my sense of adoration for dogs from the perspective of a person who was just hanging out with me. No power dynamics needed, just me telling people hey I like dogs!

However I think I confused people as they thought it was my dog. Doesn’t really distract from the message of the photo, but Lei also brought up the idea that I could have centred my photos on my obsession with dogs, which I thought was a very good suggestion, since I felt that my 3 photos didn’t really have an overarching feel. Guess I need to learn to not just think about a series as ‘3 images about 3 different aspects’ but maybe have something other than me really tying them together.

The second photo I decided to take was taken at night, from a generally eye-level shot of the different notebooks that I used for the different forms of calligraphy scripts as well as the sketchbook that I used regularly in the first half of the year. I also wanted to show the horribly extensive collection of stationery that I amassed from the end of A Levels to now HAHAHA. These notebooks and pens and brushes are really important to me as my art tools, so I decided to use them to convey how big art is in forming who I am. I took a disgusting amount of shots from many different angles and lighting, which took so much fiddling and fussing around (including having to borrow my roomie’s lamp and live in the fear of my pens drying out during the shoot): 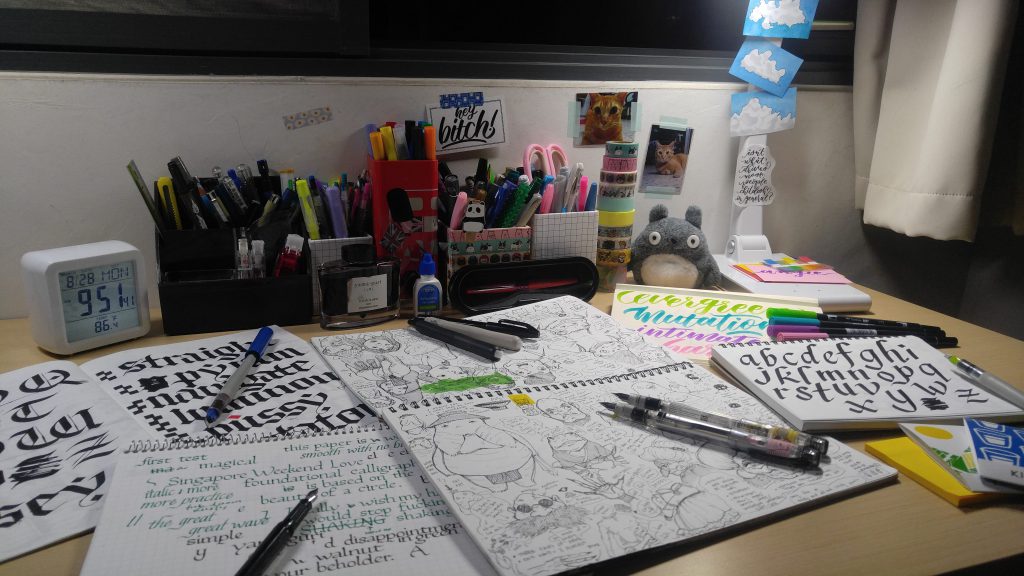 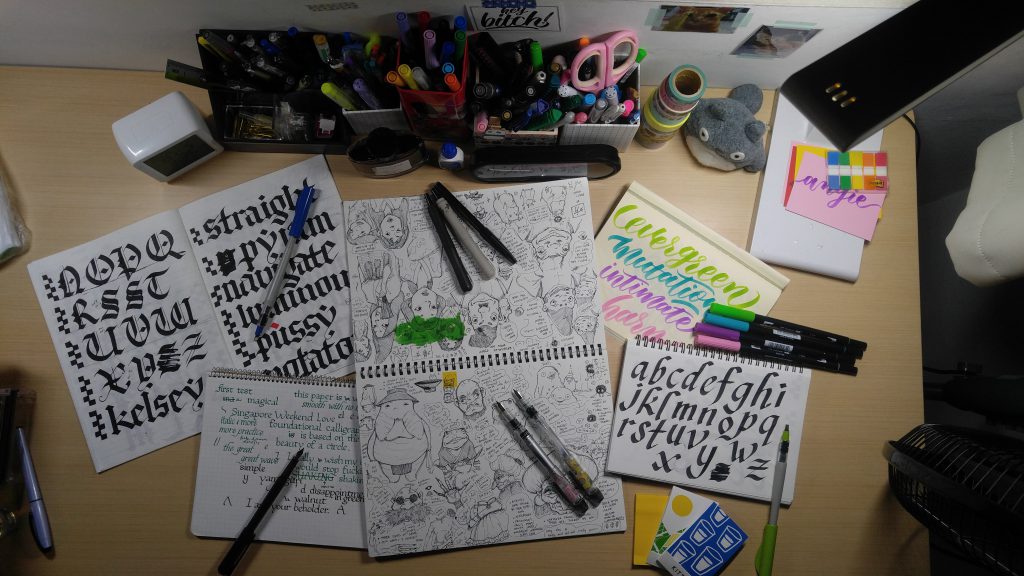 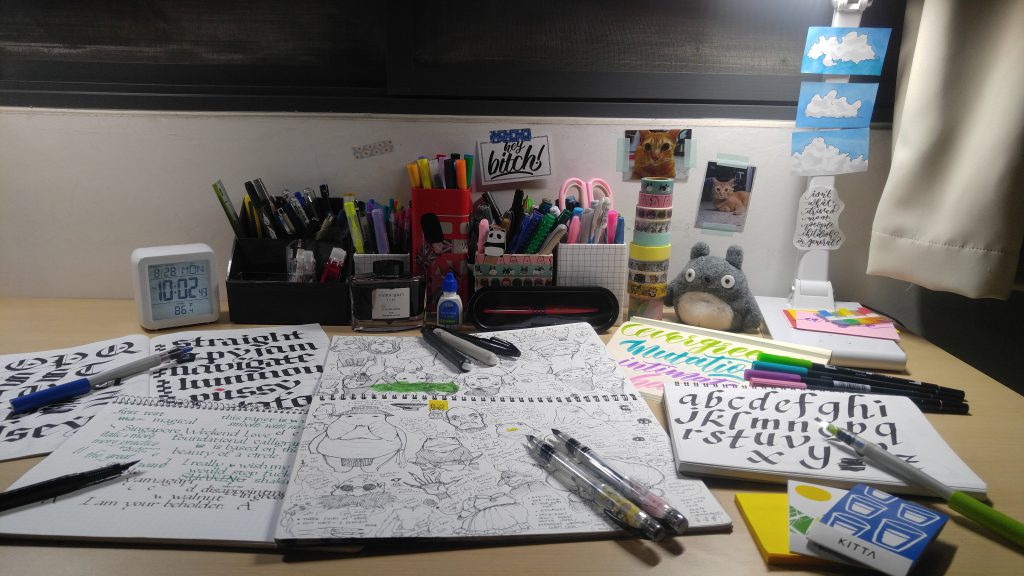 Ultimately I decided on an eye-level shot to convey a sense of a first-hand perspective my workspace, and the light to dark lighting was more interesting. I wish I was more selective on my use of colour though – the colourful things don’t stand out enough. 🙁 Perhaps I should’ve shot it during daytime, and arranged the background items as well such that they weren’t as clustered.

The last photo was the one that was a bit more personal, as I decided to incorporate the body and self-esteem issues that I had faced since I was young. Nothing too serious!! I’m sure everyone goes through that kind of thing. But I felt that since it was something that affected the way I lived everyday, and for some reason I couldn’t think of anything else when I was conceptualising my work, I decided to go with it.

I tried to convey the feeling of ‘I don’t look good enough.’ by throwing clothes all over the room (HAHAHA) so that it showed that I had been trying on and taking off clothes repeatedly, and positioned myself in front of my wardrobe mirror to show that I was carefully analysing my reflection. It would’ve been good if I could have used a high angle shot to convey vulnerability, but that wasn’t really an option when it came to small hall room. 🙁 So instead I decided to convey it through my pose where I tried to look fragile. I also played with the different lighting conditions by switching the light on and off, and positioning myself further away from the mirror: 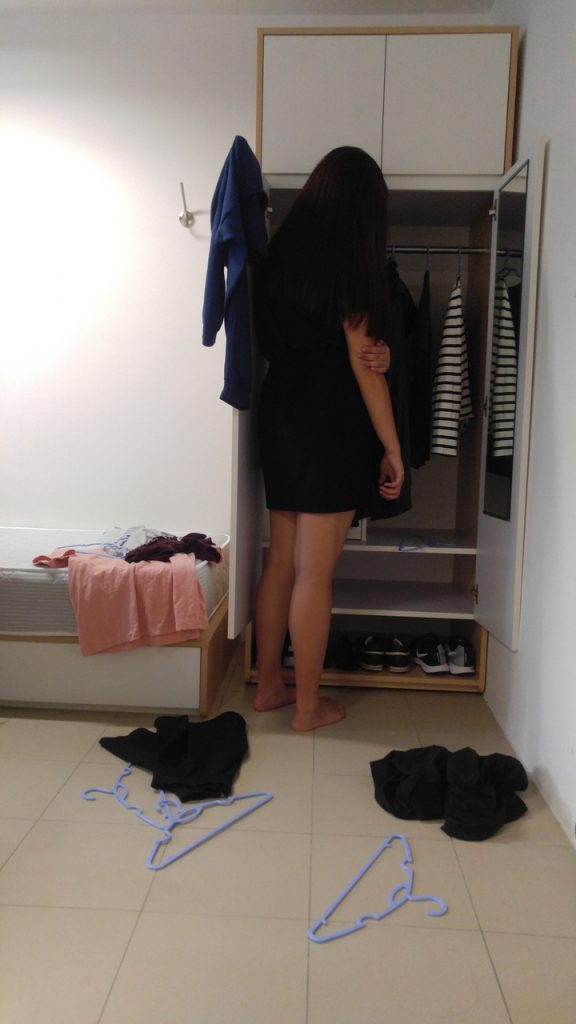 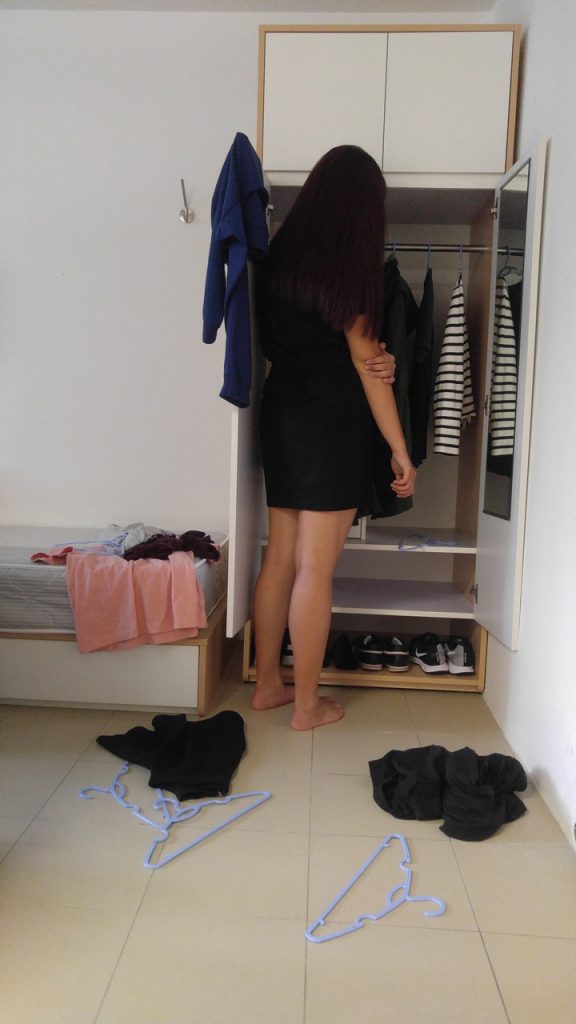 However, I don’t think the final product came out too good as it was slightly grainy because of the low lighting and that bothered me a lot, and in the end Daphne (my critic) wasn’t able to deduce the message of the photo at all. I probably should’ve made the mirror and my vulnerability more obvious by taking photos from a different angle. Now that I think about it I could’ve even played with the reflection from the mirror. But I guess that’s a lesson for another day. :’)