Another rendition of the Let Go and Move On idea, which you can find here:

I was thinking of a way on how to improve the design of the idea. I decided that maybe its better to let go of the garbage concept because firstly, it may not be “aesthetically pleasing”. Also, wouldn’t want to attract any unwanted pest, do we? Secondly, it requires participants to contribute an object which might be an inconvenience to them.

After much thought, here is the new idea:

Based on the previous idea, the artwork is a sentimental piece that delves on people’s negativity. As we approach the middle of the semester, many people seem to be clouded by some sort of negativity, be it from school, friends, family, etc. Personally, I’ve been struggling with managing my negativity too and I wished that there was an outlet for me to let go of these emotions. Thus, I hope that this artwork encourages the students of ADM to turn their negative energy into something positive.

From my understanding, analogue refers to no technology and technically, mechanics isn’t technology, right?

Anyways, the artwork first begins with participants writing down something negative on a ball that they experience recently that they wish to let go.

Afterwhich, they will insert the ball into the slot indicated and will hear the sound of the ball rolling down. The ball will eventually exit the box and join the rest of the ball in the ball pit.

(Of course, the rolling ball set up won’t be this complicated, but this is an example of how the ball will be moving around in the box.)

As more and more people participate in this “cleansing” activity, the pit will be filled with more balls for people to play around in. Thus, transforming these negative balls into a joyful experience.

Why a ball pit?

I wanted some form of reward system so that participants receive something for letting go of their negativity and hopefully, playing inside the ball pit brings a little joy to them. The idea is basically to transform this negative energy that has been implanted onto the ball into something positive that they can have fun with.

The set up seems a little complicated, so here is a sketch: 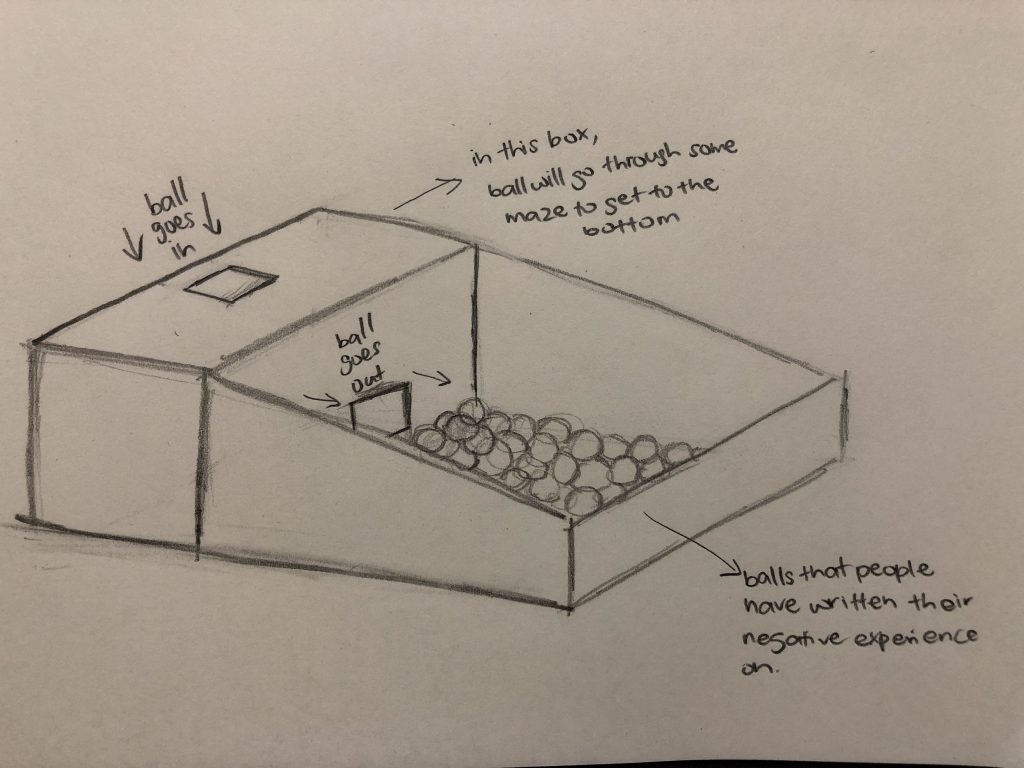 Similar to the ball pit idea, but instead, uses confetti. When participants insert their negative letter into the slot and pull down the lever, their letter will disappear and they will be showered with confetti to celebrate the act of being rid of the negativity.

However, the set up seems quite tedious, as I’ll have to set up a booth sort of structure with multiple pulley systems.

When you insert your negative letter into the vending machine (like inserting cash), the snack that they receive in return is a positive note to cheer them up.

Wasn’t too fond of this idea because it seemed like a passive interaction.