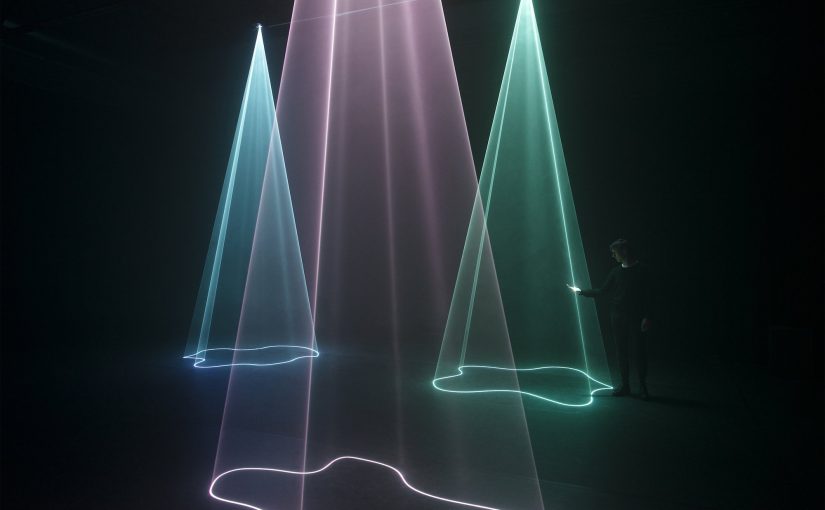 Making use of multiple wearable biosensors that detects participant’s brainwaves, heart-wave variability and galvanic skin response, these data are translated into a light composition, varying in form, colour and intensity, as a symbolic representation.

“AURA explores how this perceptual process influences the understanding of ourselves and of each other. The installation symbolises the materialisation of (internal) metaphysical space into (external) physical space.” – excerpt from Nick Verstand’s website.

Just a simple look at his previous works on his website nickverstand.com, we can see a common theme in many of his artworks that encompasses the idea of human perception such as;

The installation was exhibited in the Dutch Design Week, the largest design event in northern Europe, hosted in the Netherlands. The DDW features over more than 2600 designers with 350,000 visitors.

AURA was selected as one of Dezeen’s top 10 installations of 2017, an architecture and design magazine.

I am a sucker for artworks that invokes or encompasses human emotions.

As a designer, I envisioned creating artworks targeting social or environmental issues. Thus, Nick Verstand’s artworks are great examples of installations with a social context.

Just last semester, Bryan and I created an interactive artwork titled Inter-macy, that discusses the physical relationship between 2 people by visualizing participant’s heart rate on LED strips. The visualization was also influenced by the participants’ physical interaction with one another through holding hands. Click here to have a look at our project: Inter-macy.

In a way, I see some resemblance between Inter-macy and AURA. One thing that stood out in AURA for me was the material used. The RGB lasers, often used in his works, has some sort of psychedelic effect which is entrancing, keeping participants captivated. Furthermore, the addition of a hazer adds to the experience, making the visuals even more bewitching.

Also, I found it interesting how he created this artwork as a personal experience for the participants. I believe the individualize experience allows participants to be absorbed into the artwork and to reflect on their emotions.

However, one thing I would question is the location of the installation. I believe the space or location of the artwork affects the emotions or feelings of a person. When in an exhibition space, I believe our emotions are greatly influenced by the atmosphere of the space. AURA does include a sound component that is suppose to change up participant’s emotions. However, I think it would be interesting to place this installation in a public space where the atmosphere doesn’t impact a person’s emotions. Hence, we would be able to see more variation in emotions.

My beliefs are that emotions are unique to each person. As much as we universally can feel a certain emotion; sad, angry, happy, etc; our perception of an emotion may not coincide with another’s perception. In essence, my idea of sadness or happiness may not be the same as you.

To me, AURA not only puts into question your own perception of emotions but the emotions of those around you. The visualization of the emotions of others that you might not detect through observing their facial expression or body language, you get a sneak peek into someone’s else emotions in that experience.