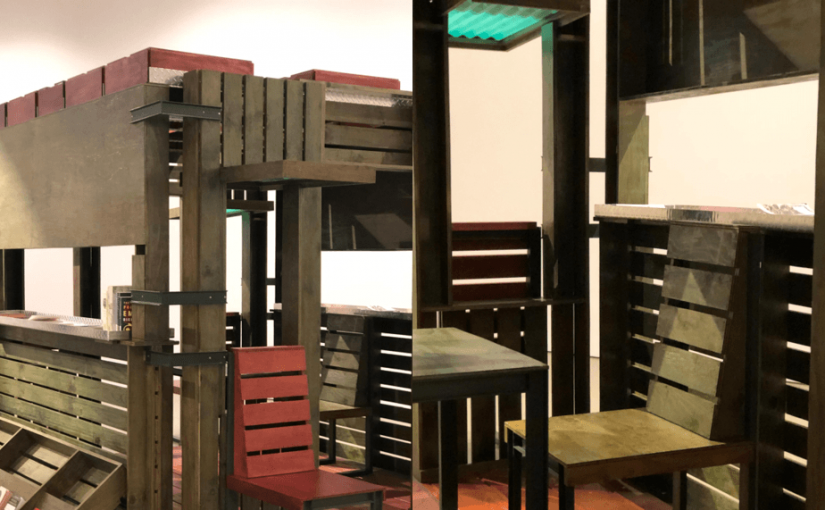 The “Siah Armajani: Spaces for the Public. Spaces for Democracy” exhibition was held at NTU CCA. We had the opportunity to visit the exhibition and have a staff walk us through the artwork.

So here are my thoughts on the exhibition:

The Sacco and Vanzetti Reading Room #3

“The installation embodies all the major strands of the artist’s work over the last sixty years: utopian architecture, the power of language, the idea of art as a conduit for social and political understanding and the creation of a more engaged public life.” – Michael McCanne 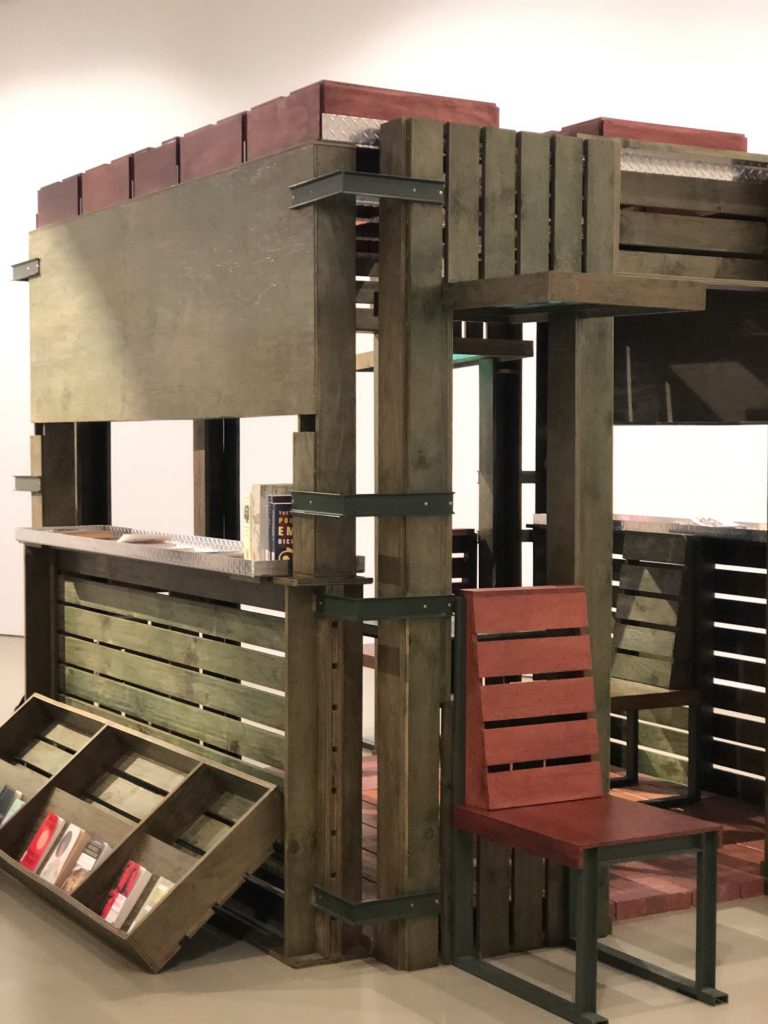 The Reading Room is designed to be inviting and functional for visitors, however, it is also said to give off an uninviting feeling.

I believe this contrasting feeling is depicted through the use of materials. The 2 wooden cabins are juxtaposed with benches or racks arranged with pencils that resemble spikes. 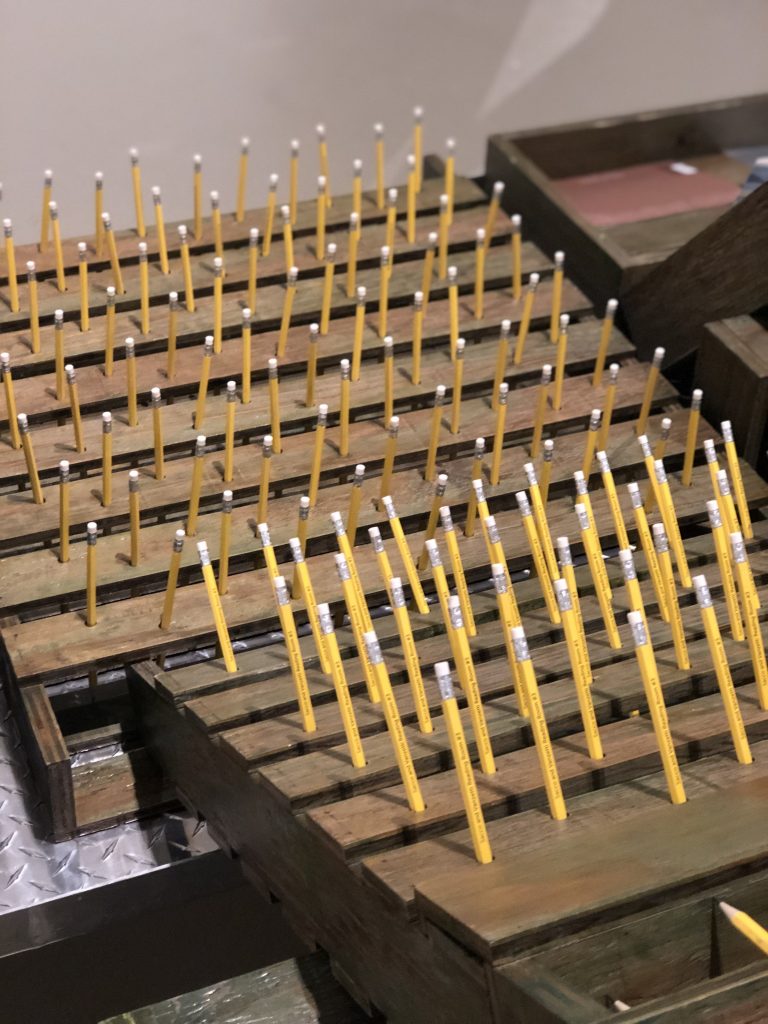 To be very honest, I didn’t experience the uninviting feeling. Personally, I felt that the space was too big, where the distance between the artworks allowed for the “escape” from the uneasiness. I felt very at peace while in one of the reading rooms with a single seat. It was a space that invited me to stay around and to read a book. Since it was far from the spike benches, I wasn’t too impacted by it. 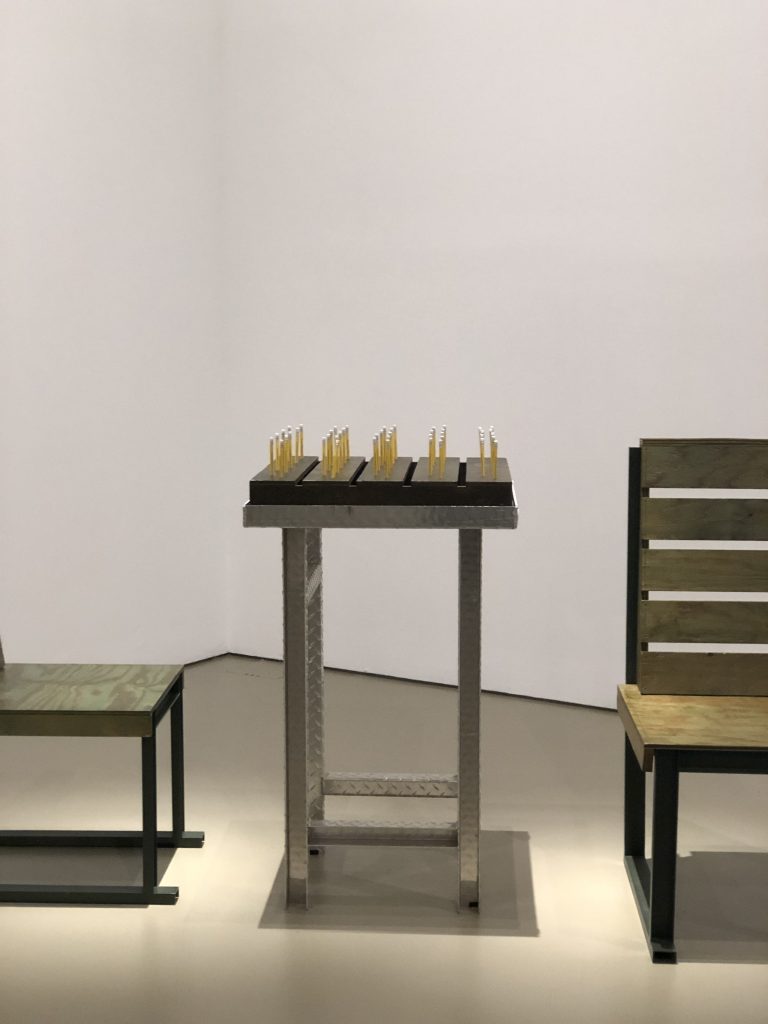 In the image above, we see how the chairs are positioned with the pencil-spiked table. When I first saw it, I thought it resembled a chessboard so I was confused by the purpose of it.

I believe this was the only instant throughout the entire exhibition where an uncomfortable feeling can be justified. The pencils did not allow for the usage of the table so when we were writing the feedback, I was annoyed at the fact that I wasn’t able to use the table because the pencils were in the way. Furthermore, the position of one of the chairs was purposely placed to not face the table which was really annoying. This set up was definitely perplexing.

The space launched an open call for individuals or groups to engage with the books. However, I would like to question the productiveness of the space in a group setting. Because in such a big and empty space, any sound or voice just dissipates into the air. For example, when we were having the Q&A session, I could barely hear our guide or even the questions asked by my classmates, even though I was pretty close to them.

In reference to Peter Zumthor’s Atmosphere, one of the points he brought up was the “Sound of the Space”. In the context of the exhibition space, the sound of exhibition space just did not bode well together in a group setting.

As part of his exploration into technology, he produced several experimental films.

“explore how mathematical equations and computer programming can be used to generate the illusion of three-dimensional space and the passage of time on one-dimensional surfaces.”
– Metropolitan Museum of Art

In my honest opinion, most of the short films were very repetitive in nature, thus you get the idea of what is being portrayed easily but after a while, it lost my attention. Nonetheless, the “animation” was definitely impressive for its time.

I don’t really have much to say about the films, however, I felt that it could be interesting for someone to recreate these short films with our current technology to see what can be produced.

As a whole, however, I felt that there was dissonance in the exhibition, with no correlation between the artworks. I felt that the Tomb artworks, as well as the Street Corners and the Short Films, did not match well with the Reading Room, which is what I perceived as the main icon of the exhibition. It felt like a cluster of separate exhibitions put together that did not tie in well with each other.

One thought on “Siah Armajani: Spaces for the Public. Spaces for Democracy // Response”