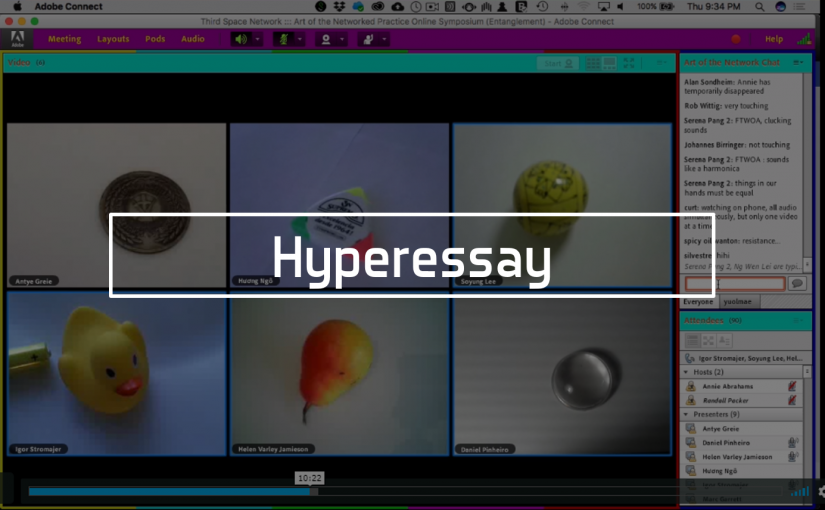 We’re all familiar with traditional television broadcasting where it is a one-way transmission of “ideas”. When we watch TV, we receive these images, videos, and information from a one-way perspective where we as viewers are unable to share our own ideas.

With the progression of technology, Social Broadcasting came about. It gives an opportunity for people to collaborate and exchange ideas that could not have been done before.

In this essay, I will be discussing how the 3-day Symposium has made use of Social Broadcasting as a form of collaboration and exchange of ideas between many-to-many people, be it speakers, performers, or viewers. (will mainly be speaking about Day 1 & Day 3)

During Day 1 of the Symposium, we had the pleasure of having Maria Chatzichristodoulou to share with us about telematics in arts and performance.

Telematics, as mentioned by Maria Chatzichristodoulou on Day 1 of the Symposium, can be defined as:

“The use of telecommunication networks to establish links to between two remote spaces of the same kind and to present the activities in those two separate spaces variously at a single performance event. These activities make use of the web as a third performance space”

From this definition, we can see how this Symposium can also be considered a Telematics Performance. Where the web-based online symposium brings people, speakers to performers to viewers, from different geographically remote spaces, in a single performance space.

What sets itself apart from a traditional television broadcasting, is the ability for us viewers to ask questions and share our own thoughts and ideas through the chat function. And the speaker being able to reply and share their own thoughts immediately.

I had the opportunity to witness 2 different performances that happened through this Social Broadcasting platform.

In this performance, Annie Abrahams and her collaborators investigate how to communicate in a Social Broadcasting setting.

What I find interesting about this performance is the use of objects, prepared phrases and voices to converse with each other in a way that brings the performers from the different geographical location into a single space. It entangles the issues of Social Broadcasting where there is a presence of “partial overviews, glitches, time-lags, disrupting audience participation and ensuing disorientation”.

With Social Broadcasting, there are obvious complications to it. For example, the bandwidth for everyone is different which could result in time-lags and glitch disruptions.

The performers made use of these complications to their own advantage which I felt is a form of embracing “Glitch Art” as discussed in lecture and through Micro-Project 5.

As mentioned in the Randall Packer, Conversation with Jon Cates (2014) Hyperallergic:

“For me, this approach to noise or noisiness, or dirt, or dirtiness, is a way to foreground as you say, an aberrance or perversion of normative message or what we might perceive to be logical reasoning.”

As a form of “Glitch Art”, this performance strays far away from the idea of perfection or “logical reasoning” and embraces the flaws or glitches of the Social Broadcasting.

This performance “intended to be a series of small miraculous mistakes, moments of beautiful brokenness, redefining Glitch Art through participatory networks and gestures”.

In terms of being “Glitch Art”, I personally felt that the first performance by XXXtraPrincess embodies it the best. The constantly changing of screens and overlapping voices emphasizes the aversion to the idea of perfection and instead made use of the glitch as an art form.

However, throughout all the performances, I personally felt that the Social Broadcasting element was not highlighted. It was more like a traditional television broadcasting where we are just watching things unfold. There was a lack of connectivity between performers and viewers, in terms of Social Broadcasting. It was a one-way exchange of ideas, a televised performance art would be a more suitable way of explaining it.

Nonetheless, it was an eye-opening performance to me as they dwell into sensitive topics that I felt that Singapore is too afraid and conservative to trudge upon. It was definitely a culture shock from the usual art we see in Singapore.

The Symposium highlighted the different essence of Social Broadcasting and how it engages the idea of many-to-many broadcasting. Using the chat function, collaborative performances, and discussions.