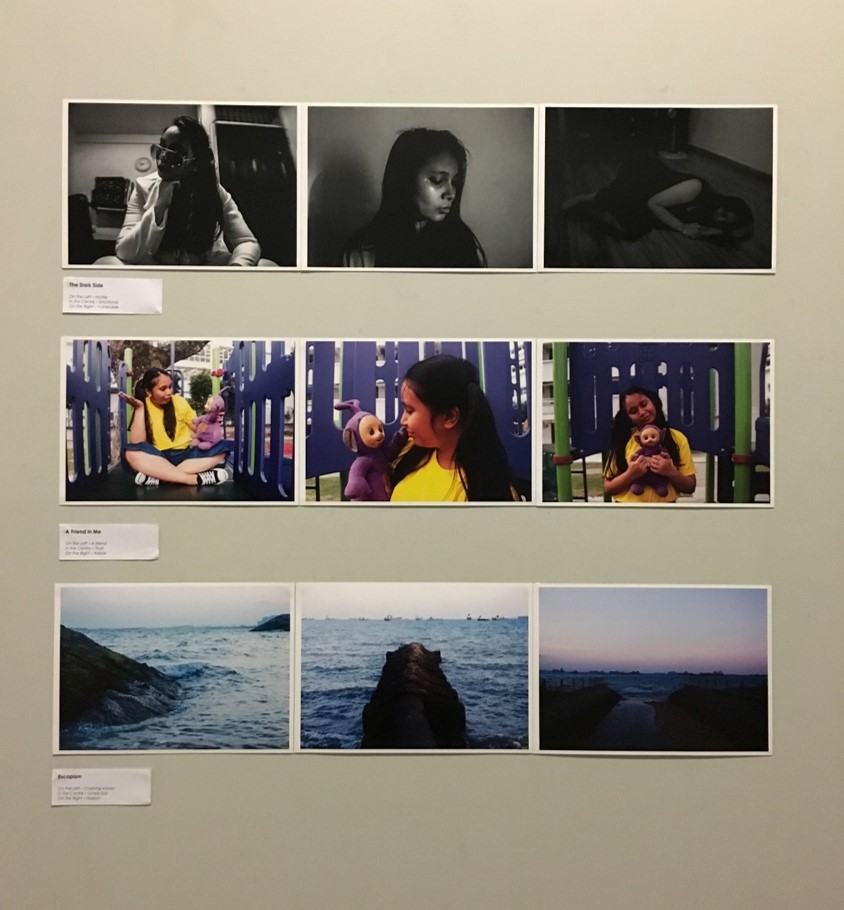 The first photo series I will be introducing is The Dark Side.

In this series, I wanted to highlight a different side of me which is darker.

Since I was using black and white, I had to play with light and dark colours in my photo by coordinating my clothes and even lipstick.

The first photo, I wanted to reflect how people view me externally. I have had people tell me how I appear very hostile, especially when they met me for the first time. This hostile exterior makes me appear unfriendly and unapproachable.

To reflect this, I angled the camera from a slightly low angle to show dominance. I used dark lipstick to give off that scary feeling and give my lips a darker contrast. I used a white blazer for a lighter contrast from my hair which is black.

Even though I have this hostile exterior, I actually have a softer side to me. I’m someone who gets emotional easily. I tend to cry in all sorts of situations; when I am angry, sad or happy. In this photo, I appear to look sad to reflect this emotional side of me. The focus for this shot is my emotions, hence I took a close up shot of myself.

This emotional side of me triggers this other complex of mine which is how vulnerable I get. I tend to trust people too easily and end up getting betrayed by them. I shot this image from a high angle to show my vulnerability and my position on the floor (curled up) represents my inability to get back up on my feet after being betrayed. The surroundings are darker to represent the darkness enveloping me.

My second photo series is titled A Friend in Me, the object that I have chosen is my childhood toy, my Tinky WInky.

A little backstory, when I was younger, I was often left at home alone. One day while rummaging through some cupboards, I found my Tinky Winky and instantly fell in love with it. Somehow or rather, I created an imaginary friend out of him.

In this photo series, since I was showcasing my childhood toy, I decided to incorporate some other childhood elements such as tying my hair into 2 pigtails and taking the photos at a playground.

In the first photo, I wanted it to represent the action of me talking to him like as if he was a real person when there was nobody around. The photo was taken in a full body shot interacting with the object. Since my object would appear small if I were to stand next to it, I decided to sit down instead.

In the second photo, it depicts my trust in this “friend” of mine, and how I used to think that we were constantly looking out for each other.  This shot was taken close up to showcase my emotions towards the object. I have also positioned the object in such a way that it appears to be looking at me.

In the last photo, it shows my adoration for this little friend of mine, and when I’m with him, it feels like there is someone there to get me through the difficult phases in my life. This shot was taken in a medium scale showcasing some of the playground.

In my final photo series for Task 3, I have titled it as Escapism. The place I have chosen is the beach at East Coast Park. I am a nature girl and when I need some time away from the hustle and bustle of the city, this is where I escape to. This is the place that makes me forget all of my problems.

ECP is a place that holds a lot of memories from camping out with my family, bbqing with my friends, cycling. However, no matter how many times I have explored ECP, somehow I always seem to be finding something new there. For example, this bar which I have never stumbled upon until the day I went down for the shoot. I positioned the camera in such a way that allows the bar to be in the centre of the frame.

In my last photo, you see the convergence where the water from the canal meets with the sea in the centre of the photo. This convergence takes up half of the image, while the other half is taken up by the uninterrupted sky. You don’t get to see the sky like this in the city. Looking up at the sky reminds me how small I am to this world and how there are so many people living under the same sky who are going through difficult times. I think about how lucky I am to be here, to have food, shelter, companions. Makes me appreciative of the world around me.

I did some research into Jo Spence’s Remodelling Photo History (Industrialization). The image features a portrait of a nude female, being Jo Spence herself, who dominates almost half of the picture and the rest of her body goes out of frame. In the background you see tall industrial structures whereas in the foreground you see the fading grass, both of this adds to the cynical effect of the image. The picture illustrates her feminism and protest against modernism in open landscapes.

For the first task, I was inspired by this piece of work where she used grey scale to convey a dark and sinister image. I decided to mimic this since it tied in with my theme which was The Dark Side.

Here are some of the photos that I took that didn’t make the cut and below are some reasons why.

Left: The lighting in this photo was perfect however I thought this photo did not reflect the right emotions. It did not showcase the emotional side of me.

Right: For this photo, I thought of snapping a shot of tears flowing down my eyes. Unfortunately, the camera wasn’t able to focus properly at the right spot. Also, when I adjusted the colours of the photo to black and white, the tears were not visible.

Left: Lei commented that the photo was a little too close and that I could afford to showcase more of the playground in the shot.

Right: The colours of the playground stood out more compared to my childhood toy which was washed out. The viewer’s attention would be to the brightly coloured playground (purple and green) instead of my toy and I. A suggestion from Lei was to wear a brightly coloured shirt that compliments my purple coloured toy.

Initially, I wanted to showcase this series in 4 themes; Waves, Sand, Sunset and Food. However, after consultation with Lei, I realised that I should showcase ECP in a not so cliché way and that the photos I took of the sunset and sand were very typical “Instagram” shots. Hence, I stayed clear of this shots and selected photos that showcase a different side of ECP.

All in all, I understood how changing the scale and framing of a photo can alter or strengthen the meaning behind a picture. Some of the challenges I faced was the inability to control the camera while posing. I had to rely on using the timer and tripod for most of my shots. Hence, I wasn’t able to control the focus of the camera to my liking. It was much easier to be behind the camera where I have full control of the angling and focus of the camera. Nonetheless, this project has been a great adventure to discover the art of photography.