As the title suggests, the book discusses the impact of computer technology on the performing arts. The book is divided into two main sections; histories, theories and contexts of digital performances & specific practices and practitioners. Since this is a pretty long book, I’ll be focusing more on the second part of the book.

Steve Dixon defines digital performance as “broadly to include all performance works where computer technologies play a key role rather than a subsidiary one in content, techniques, aesthetics, or delivery forms.”

He mentions how the internet has allowed for collaborations with no barrier in geographical distance. Let’s look at the social media app, TikTok. Albeit, not the best quality of performances, nonetheless it allows people from all over the globe to collaborate with one another to create a short performance together that can be viewed by everyone around the world.

In the next part of my review, I have divided it into two sections based on the chapters that have most intrigued me.

“Virtual bodies are new visual representations of the body, but do not alter the physical composition of their referent flesh and bones. Virtual bodies may appear to be bodily transformations to the (receiver’s) eye and mind, but no actual metamorphosis takes place within the (sender’s/performer’s) actual body. The virtual body is an inherently theatrical entity, and there is an enormous amount of suspension of disbelief going on in relation to it.”

An example he gave to “support” his view is the artwork, Telematic Dreaming (1992) by Susan Kozel/Paul Sermon. Before this reading, I had heard of this installation from one of my other interactive classes. However, after this reading, I have a completely different impression. Kozel describes how after days being engrossed in her virtual body, her actual/real body began to rebel and asserting its presence. This goes to show that both bodies can’t be split from each other and needs to find the right balance. 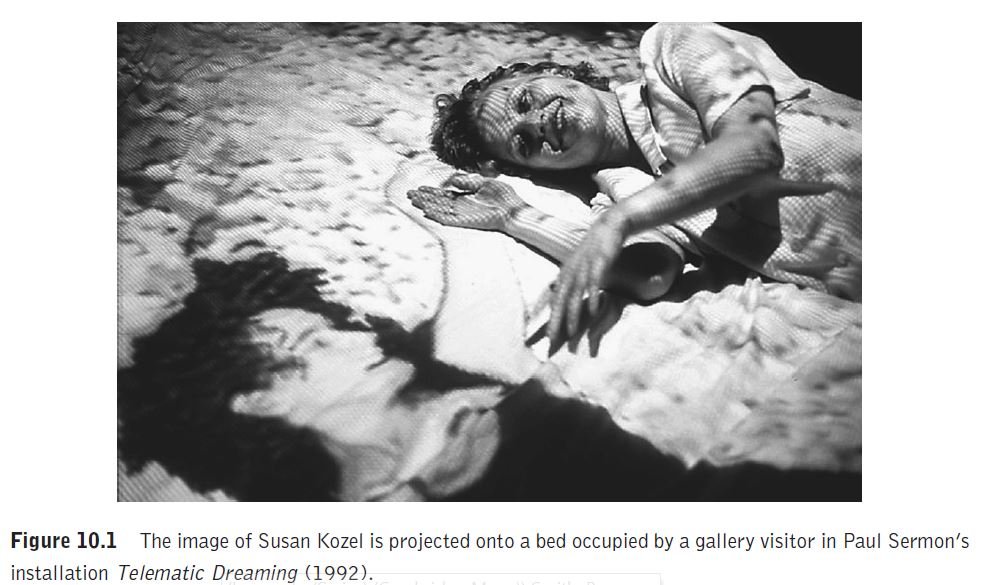 Furthermore, Kozel recounts how sexual as well as violent encounters, even though experienced through her virtual body, was often felt by her real body. Thus, she concludes how the virtual body is an “alternative, yet still material body, inescapably connected to its corporeal embodiment”.

What I personally got out of this chapter is how the virtual body cannot be separated from the actual body. For example, when we play multiplayer video games, our avatars in the game acts as a virtual body. Even though your avatar may get attacked by monsters, our actual body doesn’t experience it, but relationships/friendships build through these games are not virtually based, these connections metamorphosises into the real world.

This chapter stood out to me for obvious reasons.

A big question in interactive art, is how do you dub an artwork as “interactive”.

“If one turns on a light switch, the process is interactive—something is received in exchange—but no real dialogue takes place. In precisely the same way, many and arguably most products and artworks dubbed “interactive”—for example, the majority of CD-ROMs—should more accurately be termed “reactive.”

Interactive should be defined as a reciprocal exchange between a transmitter and receiver, thus invoking a response. For example, a tv offers only one-way communication from a transmitter to a receiver, and the receiver is not able to provide a response.

Interactive art, on the other hand, must invoke a response, thus creating a dialogue.

“But in interactive installations and performances where the user/audience member is directly addressed and can respond meaningfully, the performer becomes a “you,” operating in the second person rather than the third by nature of the direct interaction with the viewer, even when the performer is mediatized on a screen.”

The book defines interactive art in 4 types and ranked according to the depth of interaction;

For our project, Matapolis, I would consider it as a mixture of navigation, participation and conversation. Navigation – in the Q&A segments of the tour, participants will press buttons to hear answers to predetermined questions. Participation – in the green light district, participants must follow the green spotlight by moving around the space. Conversation – throughout the entire tour, participants will lose points if they do not adhere to rules. Based on the adherence to the rules, they will either leave the country or be sent to jail.