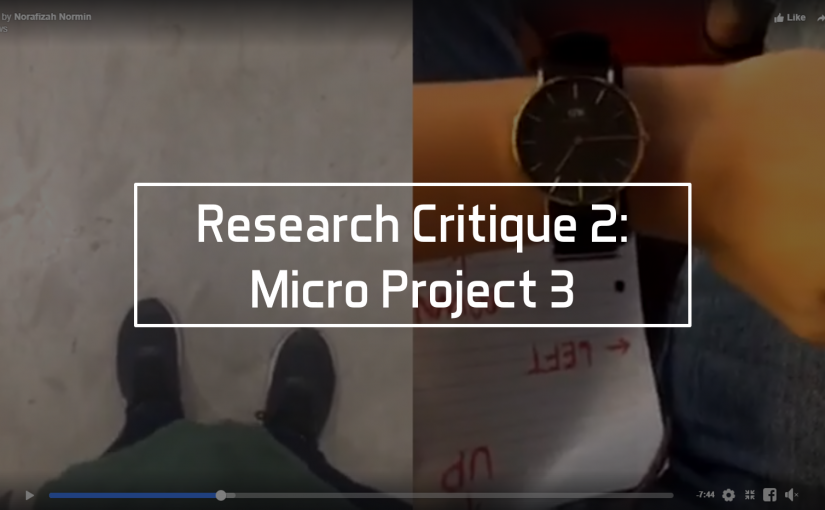 A collaboration with Chen Jingyi on Facebook Live as a third space.

For a detailed Description of the Walking Story and video, click here.

Two wandering souls, Fizah and Jingyi, enlisted the help of each other to aid in their journey around ADM. Leaving the decision on where we end up to each other, we rely on each other to decide the direction we should take when we come across two paths using a piece of paper with written directional signs (up, down, left, right). The other will respond by performing directional hand gestures.

After five minutes, we stopped in our tracks to reveal where we ended up.

For Micro-project 3, I felt that we tackled the idea of third space as another form/way to interact and communicate in different geographical location.

This can be seen from MOO (MUD Object Oriented) where it is “focused on social interaction rather than gaming” (Chatzichristodoulou, Maria. Cyposium the Book, (2012)).  Upstage is an example of such third space where audiences attending a live event are able to chat while the performance unfolds.

There are many third spaces out there that allow for communication between people from different places. One such example is video-calling platforms such as Skype, Google Hangout, Tango, etc. To me, a phone call could also be considered a third space if we are looking at it in this context. Considering this, wouldn’t Message, WhatsApp, Telegram be considered as a third space too?

Essentially, third spaces have evolved to become a part of our daily lives without us being aware.

“But most startling is the fact that the third space is simply an integral fact of everyday life in the 21st century. The digital natives have never known another reality, they are the standard bearers of this brave new world.” (Packer, Randall. The Third Space (2012))

The Hole-in-Space, one of the first telematics performance, also showcases how third space is used as a form of communication by connecting people walking past the Lincoln Centre for the Performing Arts (NYC) and The Broadway department store in Century City (LA). These two groups of people were separated from each other by approximately 3,944km, however, the artists “severed the distance between both cities and created an outrageous pedestrian intersection” (Chatzichristodoulou, Maria. Cyposium the Book, (2012)).

Similarly, in the Walking Story, this physical boundary where myself and Jingyi are in different locations are “severed” by both of us being in the same third space (Facebook Live) at the same particular time and communicating through it.

Leaving the decision that may create an impact on your life to someone else may be difficult, scary to some. In the Walking Story, the intensity of the decision is obviously lowered. However, we are put into a situation where we have to subconsciously put our trust in each other to bring us to a location. This creates a sort of intimacy between the both of us. It is like asking a stranger for directions where you have to trust that that stranger is giving you the right direction.

In the beginning, third space was something that I found difficult to comprehend. After going through Micro-Project 3 and readings, I am better able to understand the concept of a third space.