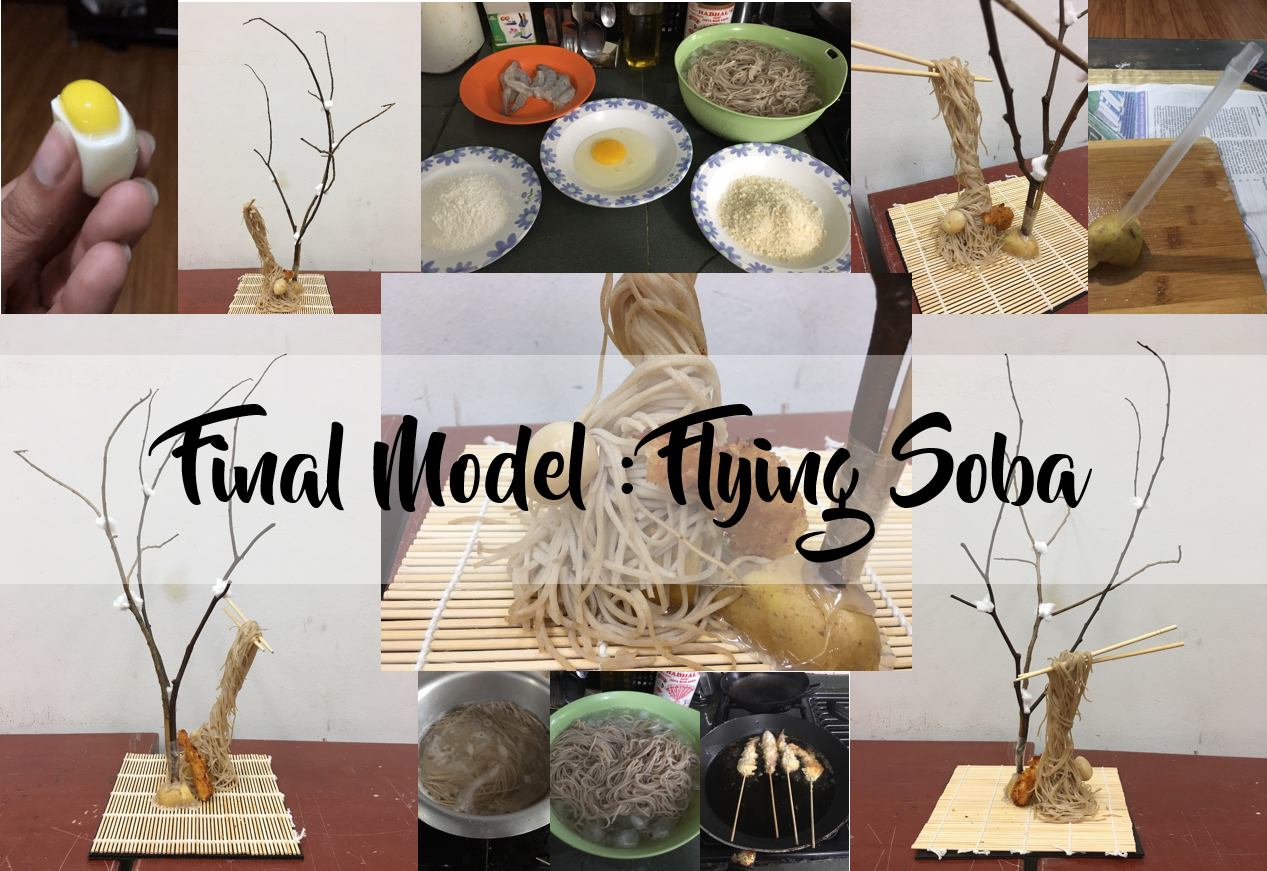 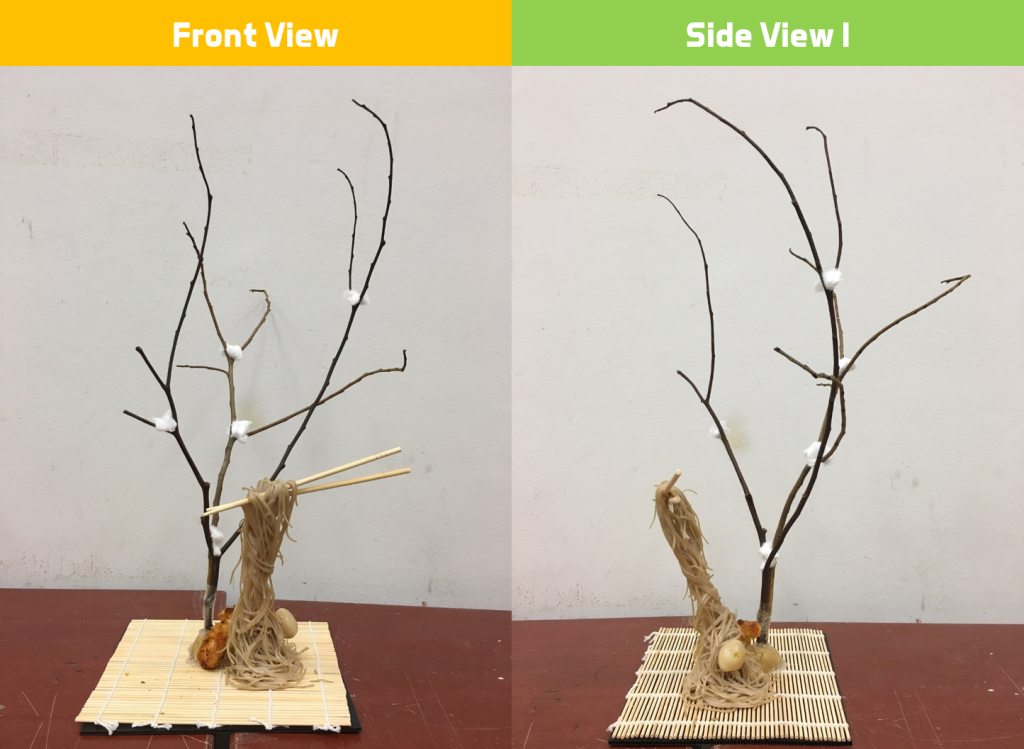 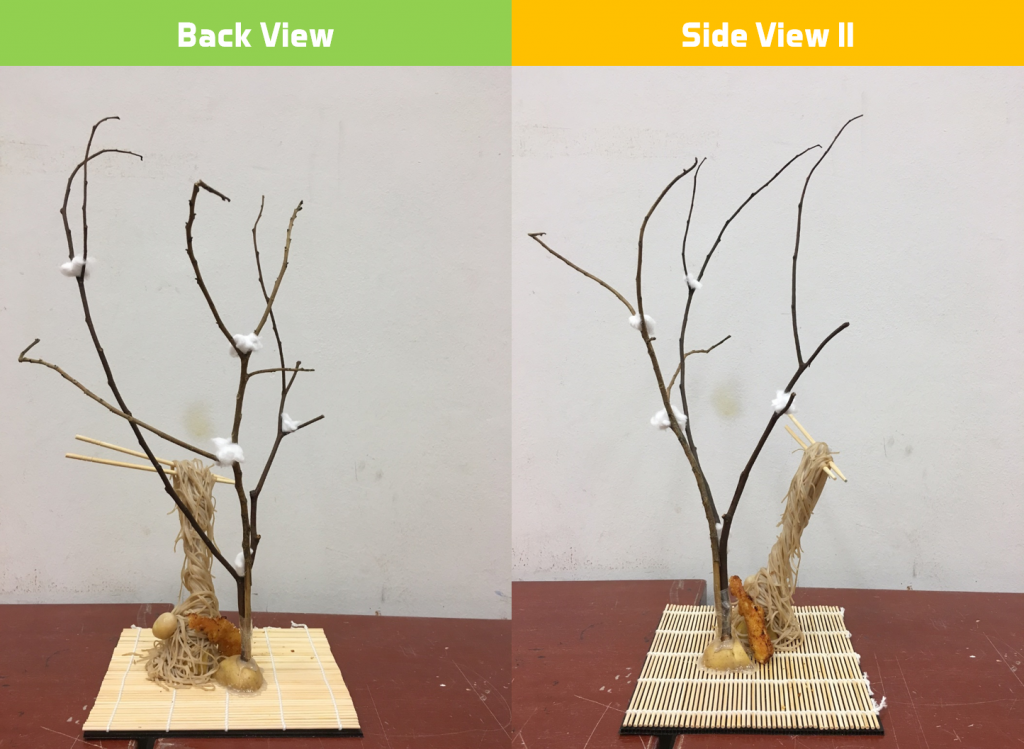 Why Soba you ask?

Soba is commonly associated with summer in Japan. Eating cold noodles in a hot, sunny day, who would not want that?

So why did I choose Soba when my theme was winter?

Winter in Japan falls from December to February with many festivals happening during the winter season. After some research, I found an interesting Japanese custom where they eat Toshikoshi soba noodles on New Year’s Eve. This custom derives from the belief that the thin, long noodles symbolises a long and healthy life.

I was inspired by the recent trend of flying noodles.

After Project 1, I thought that I was overly ambitious in trying to create a dropping marble effect which proved my demise. However, I think if I am not ambitious and do not attempt to step out of my comfort zone, then I will never learn. Hence, I decided to take on the challenge but also trying not to repeat mistakes from Project 1.

I wanted to challenge myself to create the model entirely out of food. This proved to be quite a feat as most food does not resemble a cone, cylinder or a sphere. Hence, I selected my ingredients carefully and moulded this ingredients into the shapes required.

I wrapped the soba noodles around the support to resemble the shape of a cylinder. In order to keep the structure standing, I had to use a clear thick straw which was poked into a potato, that acts as a sturdy base. 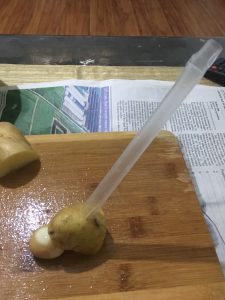 For the noodles, I used the dry soba noodles. I boiled the noodles and proceeded to leave the cooked soba in ice water to stop the cooking process.

I thought an ebi (prawn) tempura resembled a cone. In order to ensure that the prawn remains straight instead of curling, while frying the ebi, I poked a satay stick through the prawn. Below was the tedious steps I took in order to make the ebi. 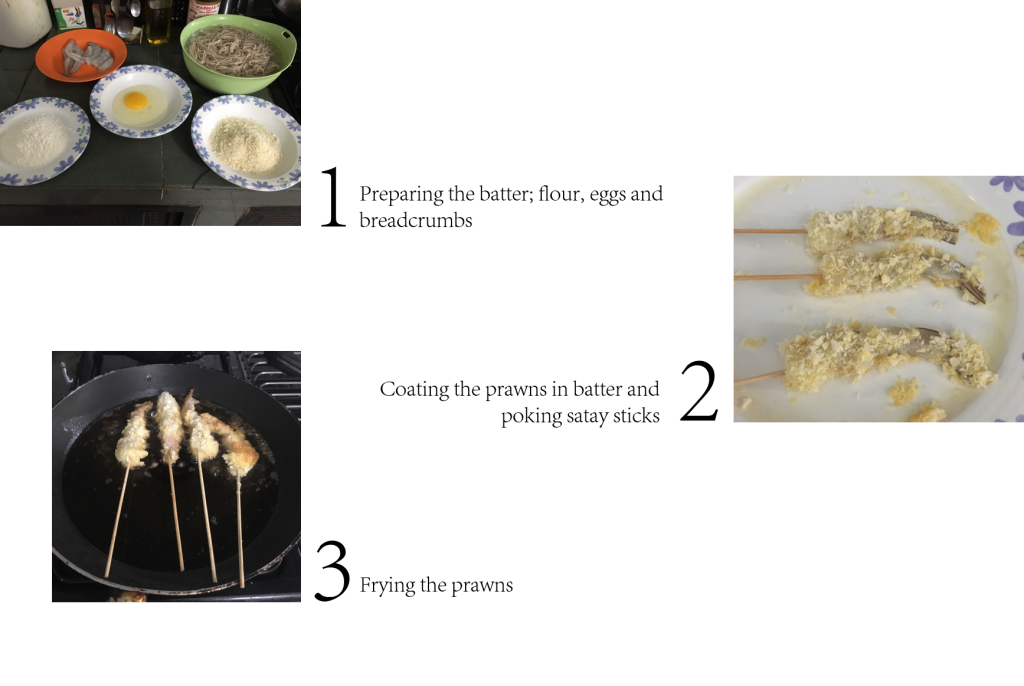 To ensure that the egg is a subordinate, I used a quail egg instead of a normal egg. Usually quail eggs are in an oval shape. In order to shape it into a sphere, I wrapped the egg in cling wrap and moulded it into a spherical shape.

Initially, I wanted to create the soft runny egg yolk like those Japanese eggs you can find in ramen. However, I realised that in order to attach the egg to the model, I would have to poke a toothpick into the egg. Thus I did not see a point in doing so, since I would need to poke through the runny yolk.

Sub-dominant Something else – Wooden Chopsticks

The flying soba created a vertical extension. I chose to utilize the upright Ikebana style and use an even longer branch to challenge the verticality of the flying soba. The height of the branch was around 2.5 times higher than the flying soba. 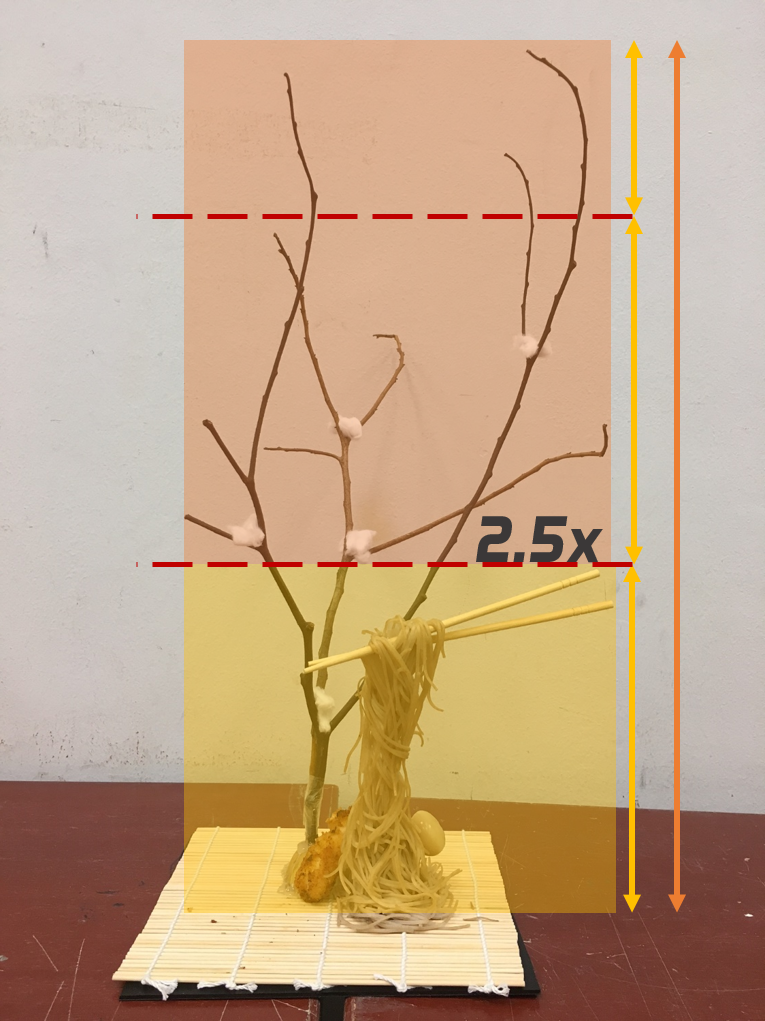 To suit the idea of winter, I chose a barren branch with no leaves. I added the cotton balls on the branch to represent the snow in winter. 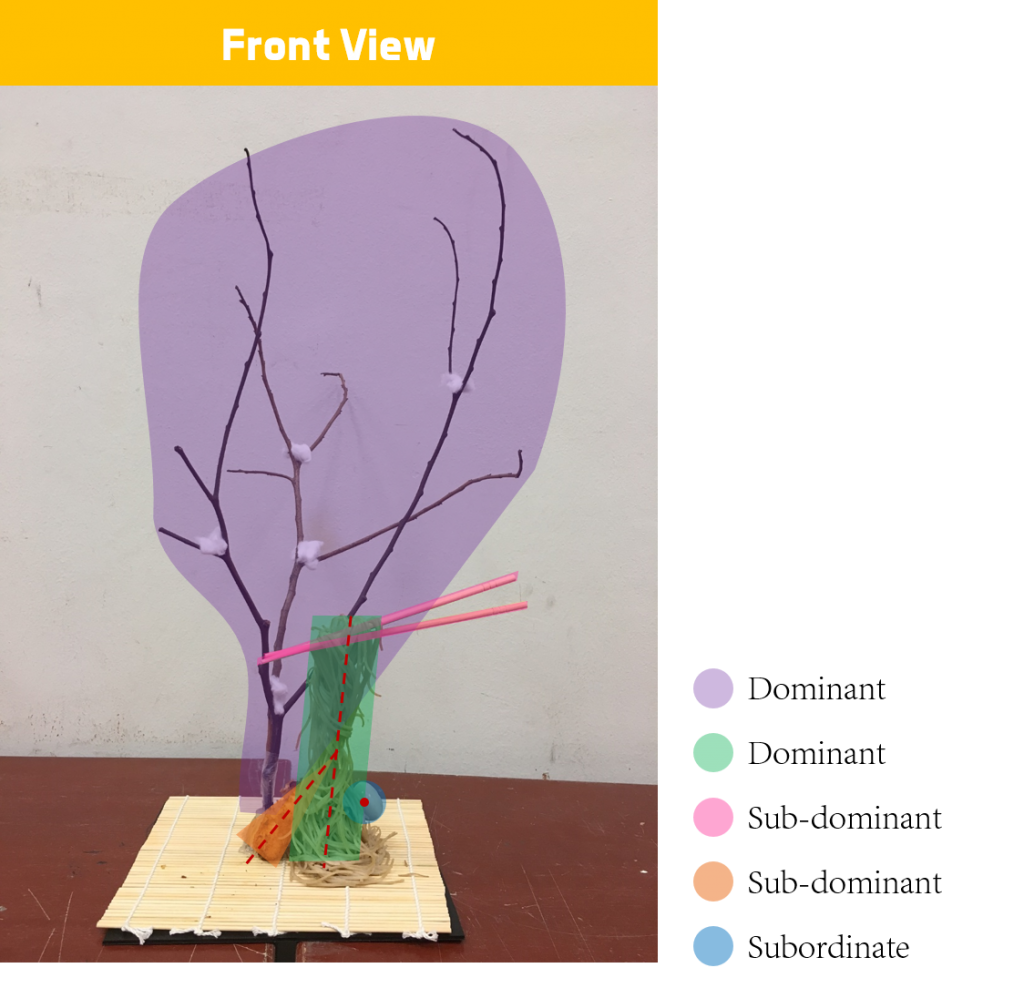 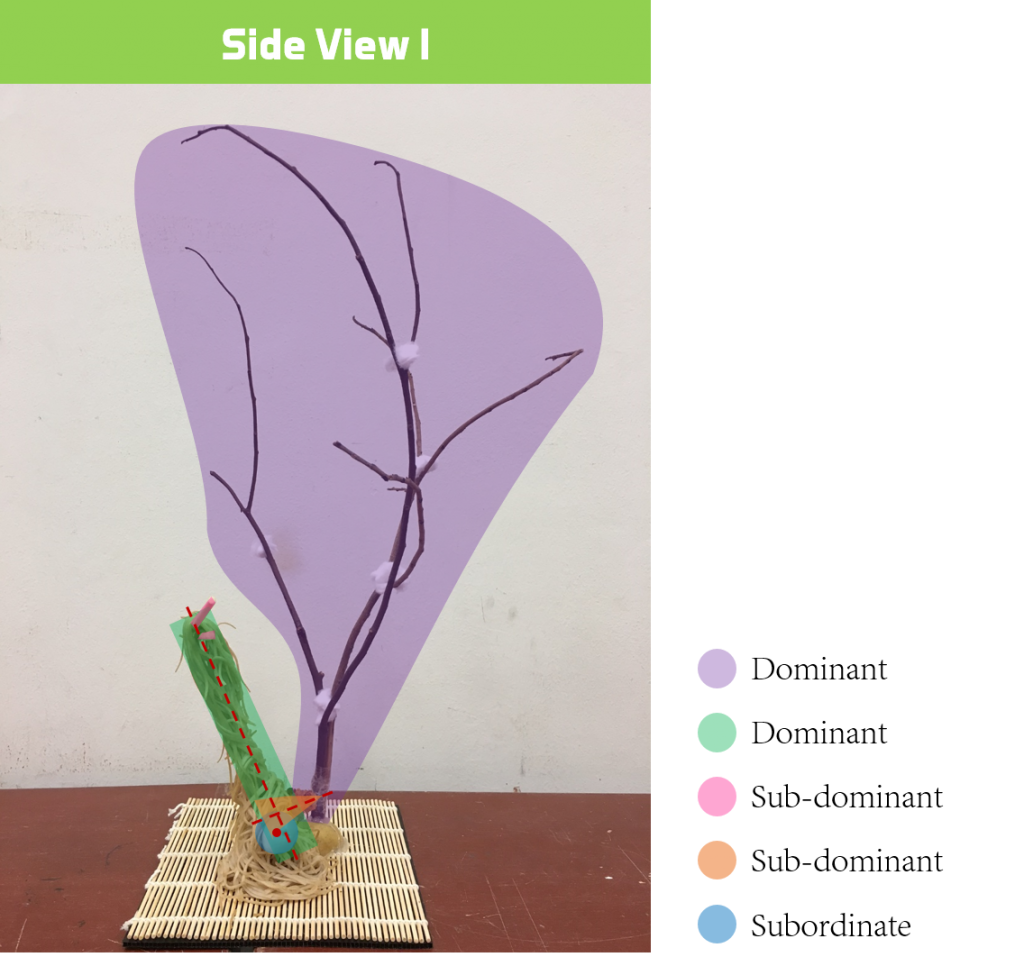 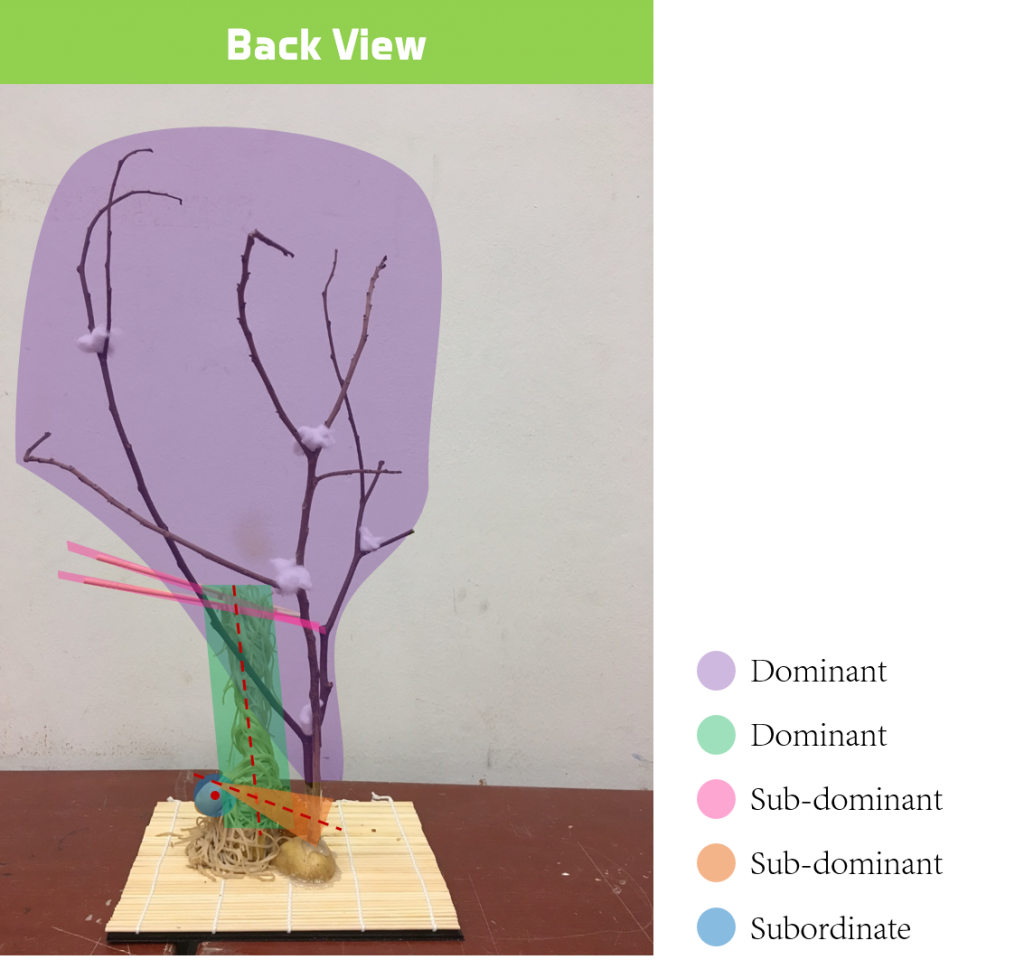 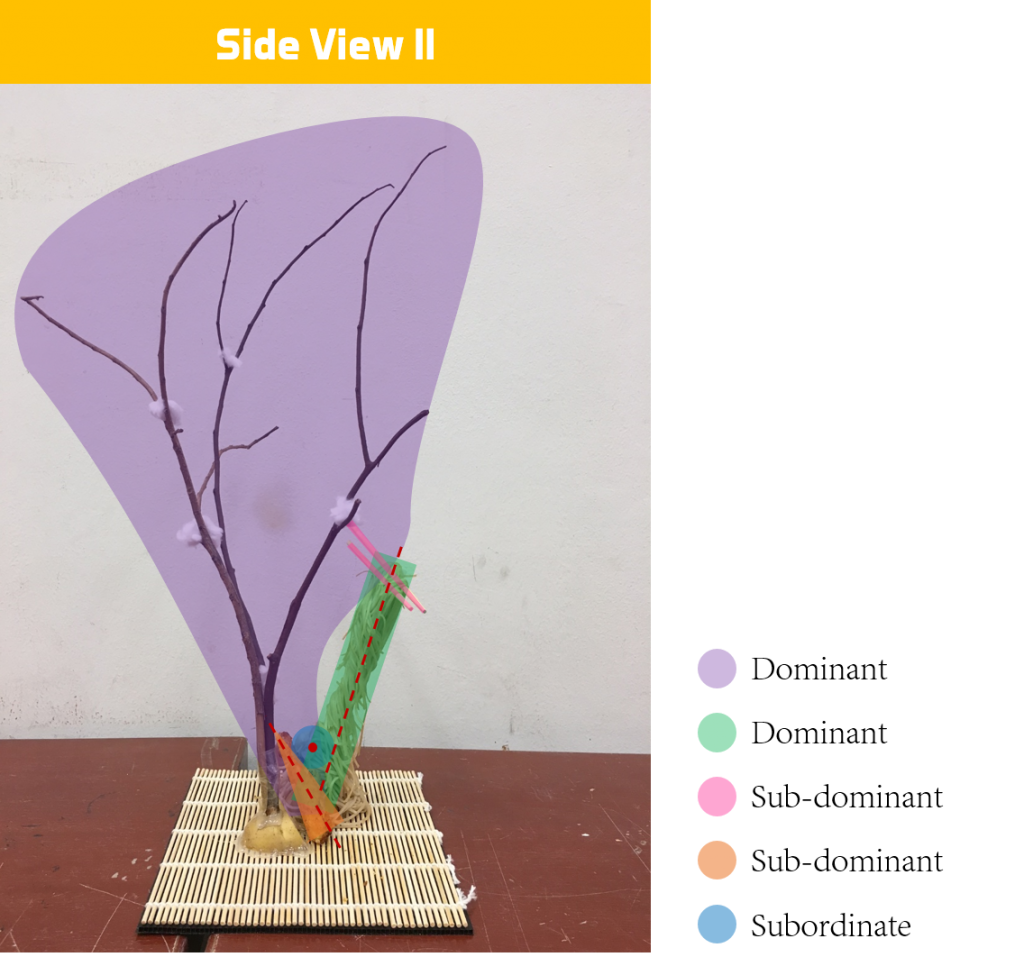 I am super glad that my model manage to stand. To be completely honest, I thought Murphy’s Law would strike me, and my model would topple during the presentation. I think I was (still am) traumatised by what happened in Project 1. Learning from my mistake, I secured it properly. And, Yay it worked! All in all, it was an enjoyable experience being a chef and a florist!