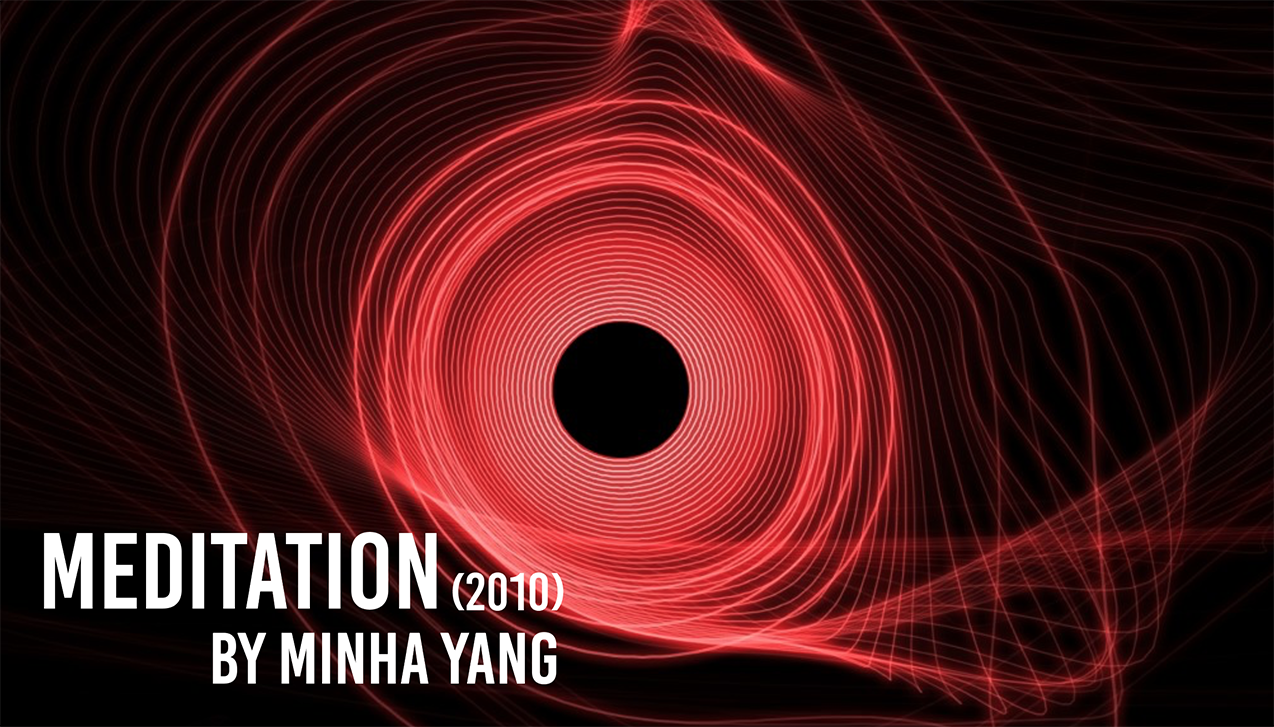 Meditation, provides a space for contemplation and reflection amidst the chaos and noise of city life. Mingha Yang said that “If we have no power to reform our environment, we need to find the possibility of meditation using the signifiers filled the cities”. From my understanding, it means that if we can’t change the surrounding to fit our needs, we implement our needs and make it meaningful and useful for us and the society. His statement can also be linked to what we have learnt in class: “The vision of art has shifted from the field of objects to the field of behaviour and its function has become less descriptive and more purposive.” Hence in this essay, I will be discussing how Meditation is a form of art and new media.

The installation itself is made up of three red, reactive projections that spans an entire wall, drawing audiences in with its pliable waves, which conform to patrons’ arms and bodies, accompanied by soothing sounds. In the image above, infrared cameras and sensors are embedded in the speakers to capture the viewers’ movements though high-speed, multi-channel video encounters that translate the motion into fluid, entrancing visuals. This is a form of interactivity, where the installation is responsive to the viewer’s action. The installation never response the same. It keeps changing, relying on the viewer’s movement. Hence, the information collected here is has a reciprocal exchange between the viewer and technology in the installation.

The viewers are free to choose their own movement, which create unpredictable and indeterminate response. Minha Yang has exhibited this Meditation series in different city. Some of the city are Seoul, San Francisco, New York City and many more. One of the things he observed was that there were different viewers’ reaction in different city. While he was explaining the minor changes he did to the installation, he said “The reason I made these changes is very simple. At the New York event, I saw everyone flapping their arms in front of their own speaker. As compare to the people at Seoul, who were a bit shy to interact with the installation.” With the viewers’ response, it acts as a form of communication between the viewer and the installation. The viewers’ movements are observed by the infrared camera and sensors, then it transfer those movement, also known as information, to the visual of the installation. This creates a responsive installation where viewers and installation are communicating with each other.

Other than providing a space for contemplation and reflection amidst the chaos and noise of city life, Meditation has a deeper meaning into it. In most of Minha Yang’s work, his intention was to question whether a fabricated religion could actually be recognized as a religion. Normally through meditation, it allows us to increase our spiritual level. Hence in Minha Yang’s Meditation, he wanted to offer the viewers a possibility for an alternative spirituality through the use of technology. However, this intended message was never correctly interpreted by viewers. Hence this is similar to abstract art, where audiences have different interpretations and view towards it. Most of the viewers understand that Meditation installation is for them to interact, but they could not link the installation to religion aspect.

In conclusion, Meditation can be seen as a form of art and new media. It encompasses interactivity, a form of communication and spiritual, and abstract art. Meditation also serve to be a purposeful form of new media art. It brings meaning to the society by taking a break from chaos and noise of city life. Although Meditation has often being misinterpreted by the viewers, this does not stop Minha Yang from creating more work regarding fabricated religion. However, what if Minha Yang can create a fabricate religion through art and technology or also known as new media art? How would the viewer’s perception change towards religion?  And through new media art, can it increase a person’s spirituality?

Constructing A Space For Meditation At Our Creators Project NY Event

New media and the reshaping of religious practice