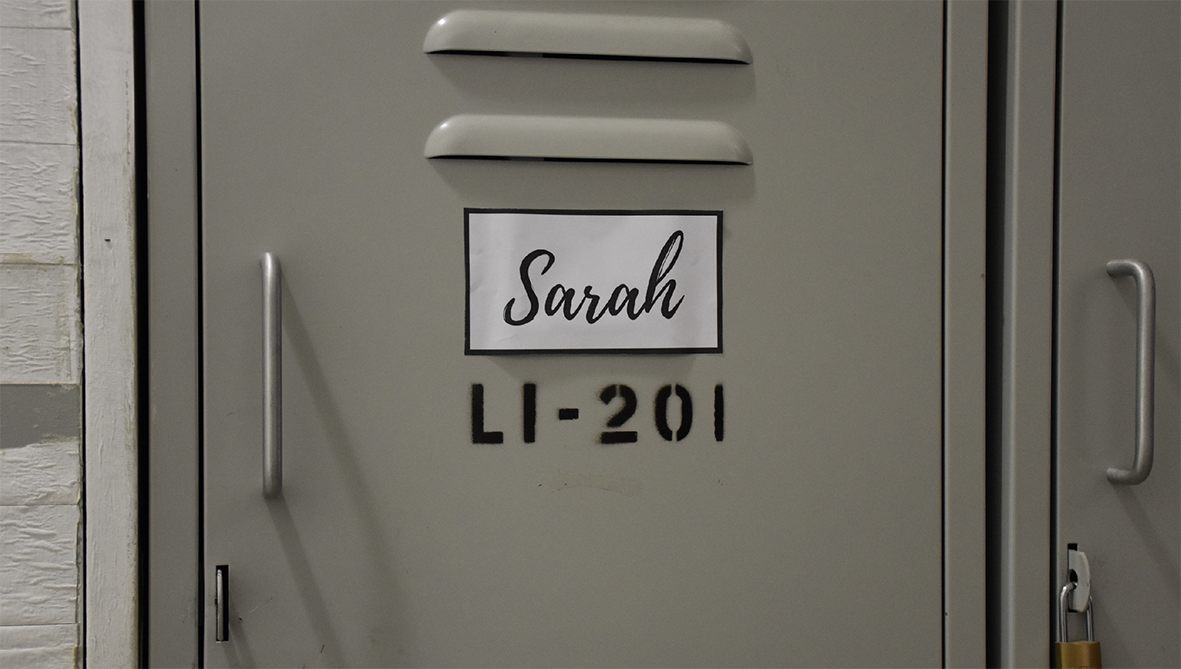 Hello! So previously my teammates (Bala, Syadza & Ying Hui) and I proposed a lesbian love story (image below). 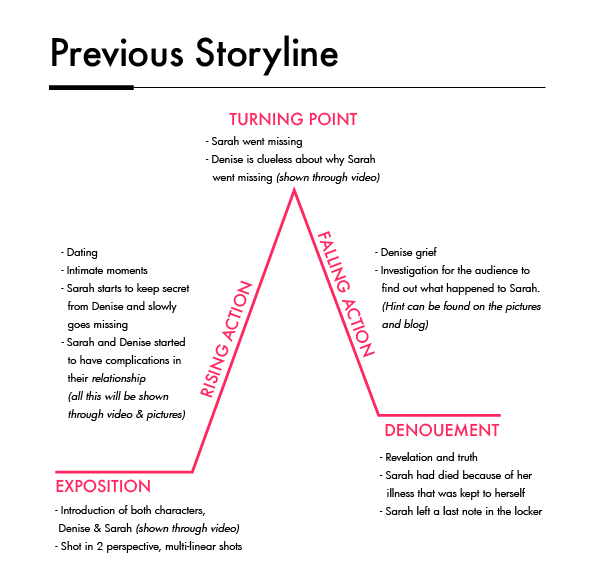 However during our consultation with Ruyi, she said that there were too many things going on in the story, such as Sarah went missing and Denise found out that Sarah died because of an illness.  So she suggested that we just focus on a lesbian love story. And one of the reference is a movie titled, ‘Blue is the warmest colour’.

Background story of Blue is the warmest colour

Adèle is a high school student who is beginning to explore herself as a woman. She dates men but finds no satisfaction with them sexually, and is rejected by a female friend who she does desire. She dreams of something more. She meets Emma who is a free spirited girl whom Adèle’s friends reject due to her sexuality, and by association most begin to reject Adèle. Her relationship with Emma grows into more than just friends as she is the only person with whom she can express herself openly. Together, Adèle and Emma explore social acceptance, sexuality, and the emotional spectrum of their maturing relationship.

Title of our project because Sarah’s (main character) locker is L1 201.

With the reference from ‘Blue is the warmest colour’, we created a similar storyline to it. However we change the some parts of the movie to fit into a junior collage context.

Sarah’s blog has a password to show that she is an introvert that keep her personal stories private. And this blog is something personal to her. In her blog, she will post short stories about her relationship with Denise. One of the post is:

Through this blog, it gives the audience a rough idea about what our story is.

Previously, my teammates and I wanted to have 2 blogs; one for Sarah and the other is for Denise. And through 2 different blogs, we can see the differences in both characters. But we decided to cancel out Denise’s blog, as we wanted to show the story from Sarah’s perspective.

In the video, it only shows the good scenes of both Sarah and Denise being together. We only showed the good scenes or memories of them, it’s because when a person remembers a relationship, she will tend to remember the good bits. That’s what Bala says. 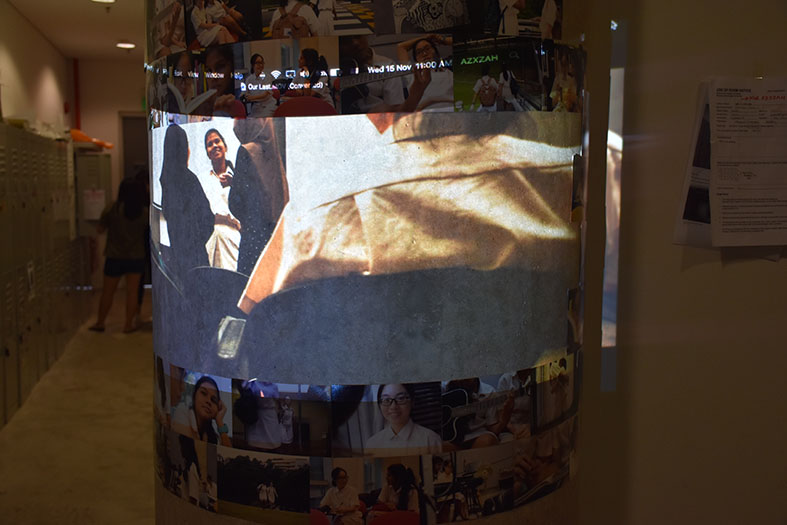 The pictures and video play similar roles. Both of it contains the good memories of their relationship.

Why we choose to project the video at the pillar?

Initially, our main idea was to project the video on the wall. However it doesn’t have any significant of projecting it at the wall, according to the original idea.

So Ying Hui suggested a few places, such projecting it in the locker, opposite the locker, on the floor and more. So we tried and we felt that projecting it at the pillar was the best option. Firstly, it’s like a direction to go to the locker. Secondly, it gives an interesting shape – concave. Lastly, it shows that the 2 characters are splitting ways when the audience stands at the side.

After we confirm on where to project the video, we faced another challenge. When we placed the pictures on the video, it did not turned out like what we expected.

The video couldn’t be seen clearly when it is projected on the pictures. Hence, we kept trying and change the position of the pictures and decided to place the image outside of the video frame.

Sarah’s locker is divided into 2 parts: Her belongings and gifts.

Under her belongings, there will be sketchbooks, watercolour palette, brushes, textbooks e.g. math, english etc and pictures. This is to give the audience a hint of Sarah’s characteristic as she is neat, studious, smart and artistic.

Here are some feedbacks I gathered from my classmates:

Honestly my teammates and I did not thought through about how this story can being linked back to the society, or how can this installation can affect the audience through the message that my group wants to bring across. As we too focus on how to execute this lesbian love story. The message of this story is Love is fleeting. But it was a bit unsuccessful in bringing the message across to the audience.

In the proposal , my group mention that there will be a letter in the locker. The letter is Sarah’s last letter to Denise. However after discussing among ourselves, we did some changes to the story and decided to have the letter narrate in the video. Hence this is the reason why there is no letter in the locker.

I get this question a lot from my classmate. So here how it goes:

At first, my group wanted to do on a love story but we were a group of girls. Hence Bala suggested a lesbian love story. At first I was 50-50 about doing a lesbian story because it is against mine and Syadza’s religion. However I knew that I was going to be the backstage person when doing this, and at that point we could not think of another story as Bala wanted to use locker as our installation space. Hence, it is like having a space and thinking how to fit a story into the space which was not a good idea, because it constraint us and we could not explore other story, platform and space.

My group did not pay much attention to the little detail, as what one of my classmate mention above. But we had a reason behind the choice of character’s name, as we wanted the character’s name to portray their background and characteristic. So Denise is someone who is dominant, aggressive and have the mindset that ‘You only live once’. And her characteristic is based on her childhood, as her mom died when she was young. Sarah is someone who is introvert, shy and gentle. With her name, it shows that she comes from a high standard family where her parents demand a lot of her since she was young, such as high education.