For Project Two, we worked with curvilinear objects which basically consisted of spheres, cones and cylinders. The following would be my 3D sketch models after some experimentation.

I decided to go with the first design as I liked the flow of it better and preferred the overall silhouette more.

Once we had our sketch models done up, we were told that our final model ultimately had to incorporate food elements to be our dominant, subdominant and subordinate pieces, while also adding in a tree branch and one other special item. We were also give themes once again to base our final model around, and mine was Autumn. 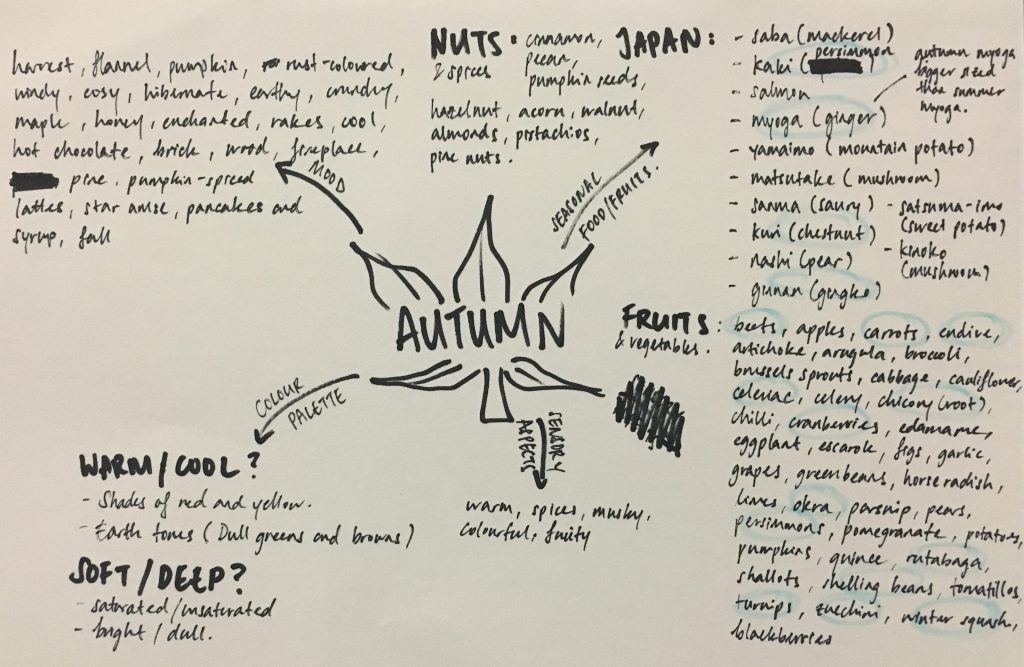 Upon doing up my mindmap and after some researching, I decided I wanted to concentrate more on my colour palette to bring about the whole Autumn vibe. That meant using a lot of earth tones and red – orange hues in my final model. I also did research on the types of foods commonly associated with the season so as to have an idea of what I wanted to get before I went shopping.

Sphere: Mochi – Japanese element, however it’s usually eaten in spring and it’s too soft to support my model as my sphere is the base.

Cylinder: Persimmons (kaki) – Seasonal autumn fruit in Japan. I wanted the preserved ones as I felt they would fit in better with my model, however, I was not able to find them as I was told they were only available during Chinese New Year.

Cone: Seaweed/Myoga (ginger) – Seaweed didn’t match my colour palette and the myoga would’ve been too heavy to be supported by my base. Also, I couldn’t find it in Singapore.

Sphere: Macadamia Nut – Harvesting season through Autumn, appropriate size, fits with my colour palette, hard enough to serve as my base.

Cone: Beancurd skin – Roasted with heat gun as a lot of Autumn recipes involve roasted vegetables, roasted nuts etc, fits with my colour palette and able to cut to size. 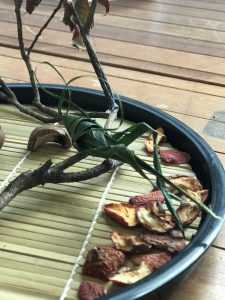 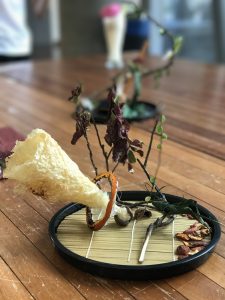 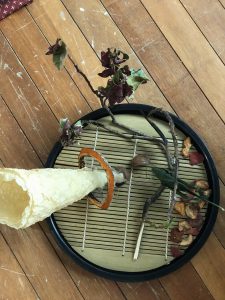 For my branch, I chose one with leaves that were green at the top and red on the underside. I liked that there were two tones as to me, it signified the transitioning of the seasons (such as from Spring to Autumn, green to red). I also made sure to pluck the branches a couple of days before so that the leaves would wilt, so as to achieve even more of the Autumn fall vibes. By chance, I managed to find a small vine which I found really pretty and really wanted to include it in my model so I wrapped it around the branch closest to the grasshopper so as to create another sense of spherical void.

While picking my branches, a grasshopper happened to land on my arm. That got me thinking seeing as how technically, if Singapore was a country with seasons, we would now currently be in Autumn and I wondered if that had a relation to my sudden encounter with the grasshopper seeing as how they were not a common occurrence to me. After a quick google search, I found out that grasshoppers were indeed most notable during Autumn season and I figured I had to include it into my model as my special item. So I googled grasshopper weaving tutorials which should anyone be interested, can be found here and here. To finish off, I added some dried hawthorn berries to balance my entire model as it was abit heavy on one side and I wanted to add more colour as Autumn is quite a colourful season. I was debating between using Star Anise or the Hawthorn berries, but decided to go with the latter as they matched the red of my leaves and looked abit like fallen leaves that people rake during the season. Also, hawthorn berries are yet another seasonal fruit of Autumn.

Overall, I really enjoyed this project as firstly, I love food and I got to eat a lot of my classmate’s works after presentation, and secondly, other than the fact we got judged a lot picking branches and leaves and carrying them around, I really like working with plants as I think they help beautify everything which is also why a lot of the end products were so aesthetically pleasing.

I was supposed to add in a piece of wire to the vine so as to make it point inwards to create more of a spherical shape to the void, however, towards the end of class, my beancurd skin started breaking apart and hence, I wasn’t able to take more photos after..