For Project Two, the three tasks were: 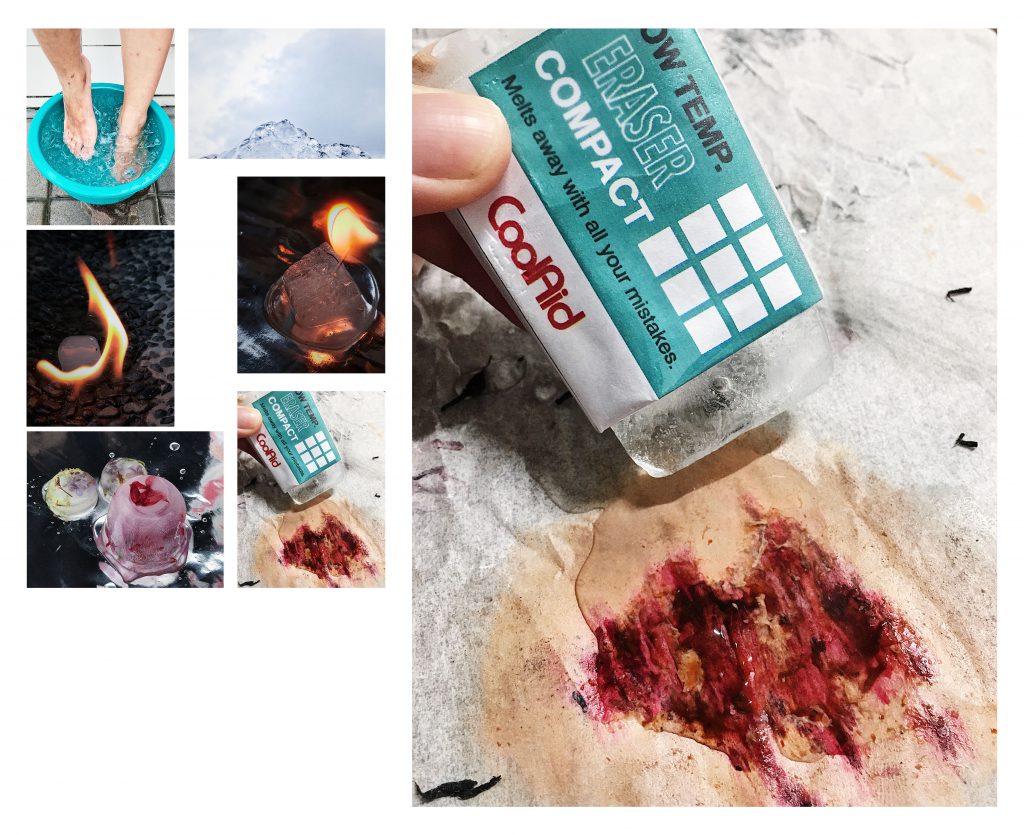 We were each assigned a random object for Project 2 and I got Ice Cube. When I first learnt of the project brief along with the object I was assigned, I figured I was doomed seeing as thinking out of the box is something that has always been a problem for me. Thankfully, Wen Lei had a couple of brainstorming sessions for us during our consultation week and those proved to be immensely helpful. 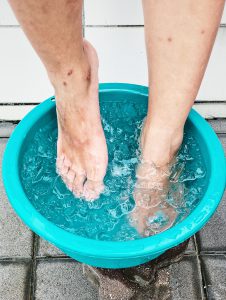 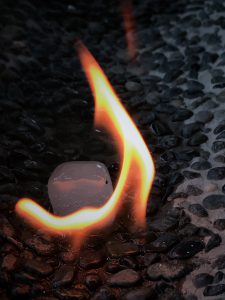 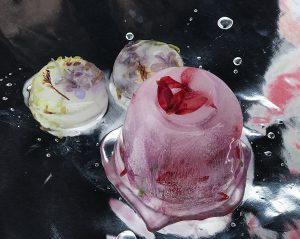 For Task one, we were to showcase the physical attributes of our object. Hence, I decided I wanted to present it through the following ways:

Photo 2: – Had to figure out how to set my ice cube on fire. Solution: Lighter fluid

Photo 3: – Photographing fast enough before the ice melted, that meant figuring out the composition, camera angle and background before bringing out the ice. The background had to be waterproof, and I couldn’t bring it far from my dorm room but I knew I wanted natural lighting as any other lighting wouldn’t make the ice looks as nice. 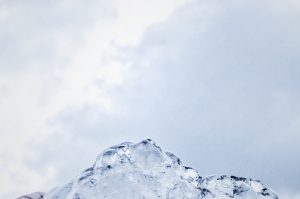 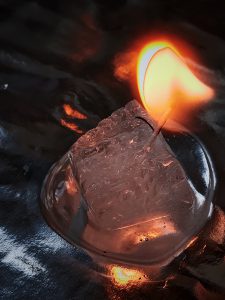 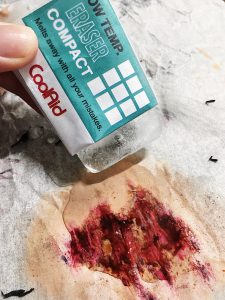 Task Two I had more of a problem with as it involved thinking out of the box. Even though the brainstorming session conducted by Wen Lei was a huge help, I was still occasionally restricted by my object (e.g for the Replacing aspect, while several other objects consisted of more than one part, an ice cube didn’t, hence, there was nothing I could take out to replace without just replacing the entire object). However, along with some googling, I did get a general idea of what direction I should approach in regards to my subversion, which was how I was able to come up with my ideas.

Photo 1: Ice as an Iceberg – This idea came to me during one of the brainstorming exercises which involved taking your object out of its usual context and putting it in another. Hence, I thought of putting it in its most natural environment, which to me, would be an iceberg. However, the plan to carry it out was something I couldn’t really think of till it came to me by chance when I was shooting my other shots one day. As I had bought a big bag of ice from 7/11 for my ice bath shot, I had to crack it into smaller pieces by smashing the bag on the ground and that created several organic, angular large pieces which resembled mountains to me. Thankfully there were also clear skies that day and hence, I was able to create this shot with some editing.

Photo 2: Ice as a candle – This idea was to serve as a parallel to my second photo in Task 1. Where the ice used to reject the flame, in this shot, it now serves as a vessel for the flame. Unfortunately, due to time and material limitations, I had to achieve this photo with a few tricks as I wasn’t able to make a legitimate ice candle in time. However, after multiple shot bursts, I managed to capture something that looked real enough.

Photo 3: Ice as an eraser – Originally, my idea for this was just to show the water from the melting ice washing away some dirt, however, that felt a little too irrelevant as people rarely use ice to wash away just dirt and while that may be the purpose of subversion – to take away the original meaning of ice – I wanted it to be deeper than that, which I will explain in my Task 3. 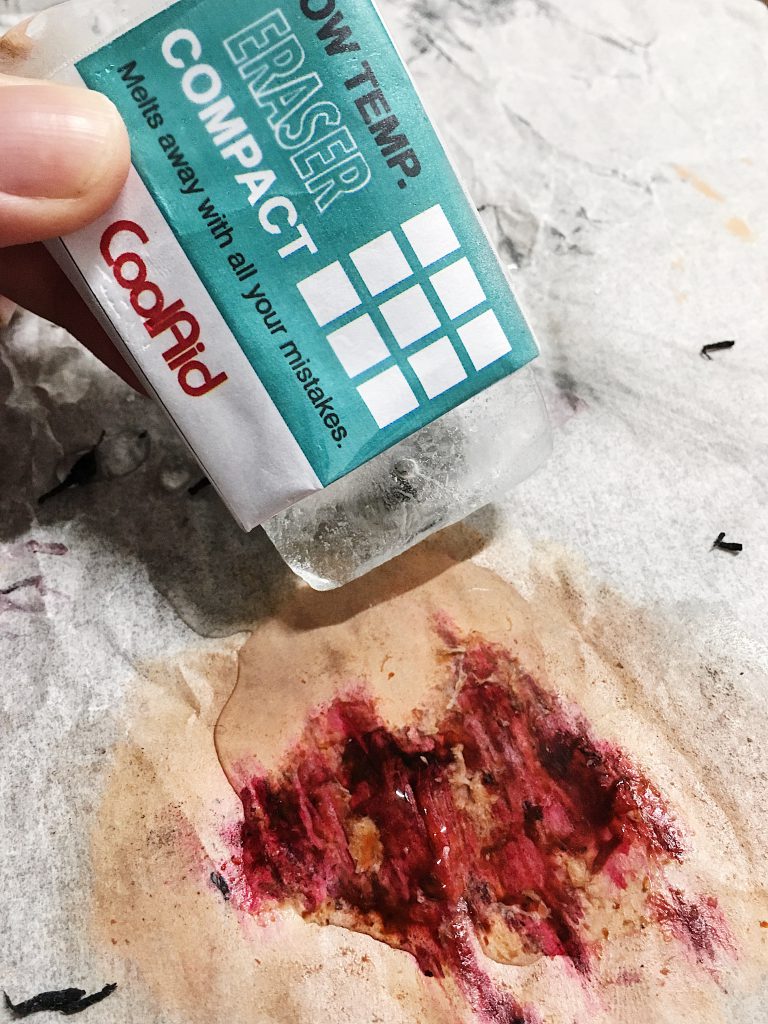 In this final task, I went with a recreation of a wound instead of my original idea of dirt. This idea came to me after thinking of my text which serves as an anchorage to my photo. With the use of “CoolAid”, I wanted to give the viewer the idea of a literal cooling aid to wounds and burns but at the same time, as the packaging is that of an eraser, I didn’t want it to be a real, tangible wound so as to show that other than just a CoolAid, it is also more than that. It can also get rid of things as insignificant as eraser dust and dirt, which makes it a super useful tool. On yet another level, as elaborated by my relay text “Melts away with all your mistakes.”, it can also melt away your intangible problems, just like how iced drinks sooth me on a hot day and such.

As for how I made the wound, I used a variety of materials, such as Macdonald’s garlic chilli sauce, red marker, brown marker, concealer, foundation and moisturising cream. I also used the packet of the garlic chilli sauce to scrape lines through all the gunk after applying everything so as to create more of the scrape texture from a real wound.