The symposium was an interesting experience, having been my very first one ever. I found it really cool to be able to witness performances from artists of different continents all over the world, which really brings back what we learnt about third space places emphasis on it’s convenience. As I referenced previously in my post about teledrift, this statement by Maria Chtzichristodoulou really hits the nail on the head about the importance of third space:

“… suited to projects that seek to connect countries and communities with limited access to infrastructure and resources, and restricted connectivity.” (Maria Chatzichristodoulou)

However, while it has its convenience, I came to realise it definitely has its disadvantages as well such as in the event where one of the performers doesn’t seem to be acting according to plan, there may be no other way for the other collaborators to get through to them other than through the very same platform they are collaborating on. One example would be during the segment where all the artists had their eyes closed and were disappearing one by one before it was only left with Helen.

However, when her eyes remained close for what seemed like too long, the spectators began to wonder if she had fallen asleep. At some point, even her fellow performers were typing in the chat asking her to come back but she remained unresponsive. Hence, this brought up the disadvantage of inaccessibility in a platform which is supposed to make collaboration more accessible.

I attended day one and day three and the performances from both those days were definitely very different. Admittedly, for the first day, I felt more lost as to what the performances were about as I didn’t really understand what was going on due to it being very abstract to me. On the other hand, the third day’s performances definitely were easier to digest as they felt more relevant to what’s currently going on in our society in today’s context, namely social media, which is something many of our current generation is actively involved in. The differences between the performances from both days however, was the increasing sense of voyeurism in day three.

On day one, all performances were filmed from the respective artists individual cameras, making them aware of the camera that was filming them at all times. They were able to control what they were showing us, whether it was them, or their ceiling or an object of their choice, with full knowledge at all times what we were seeing. 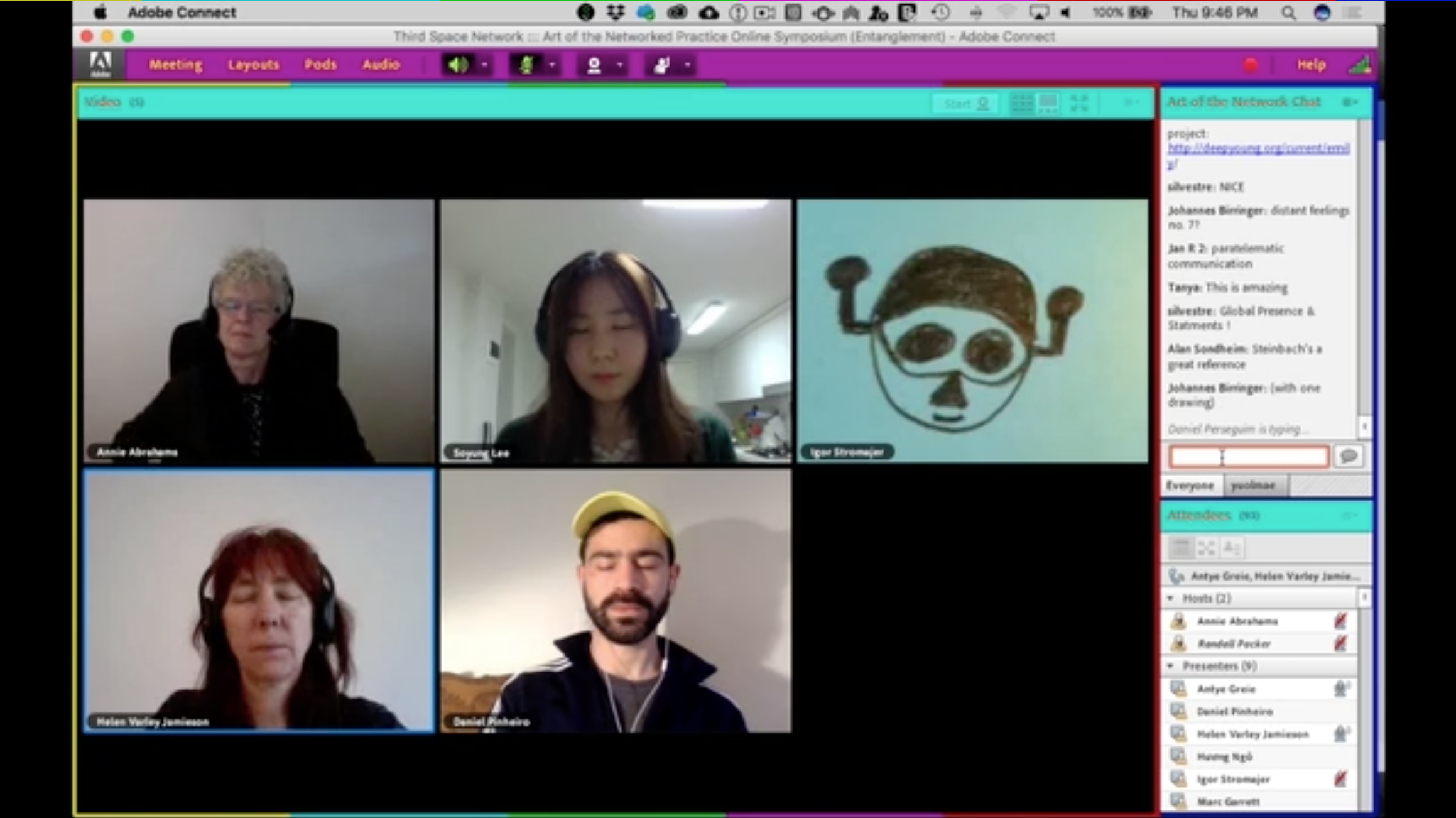 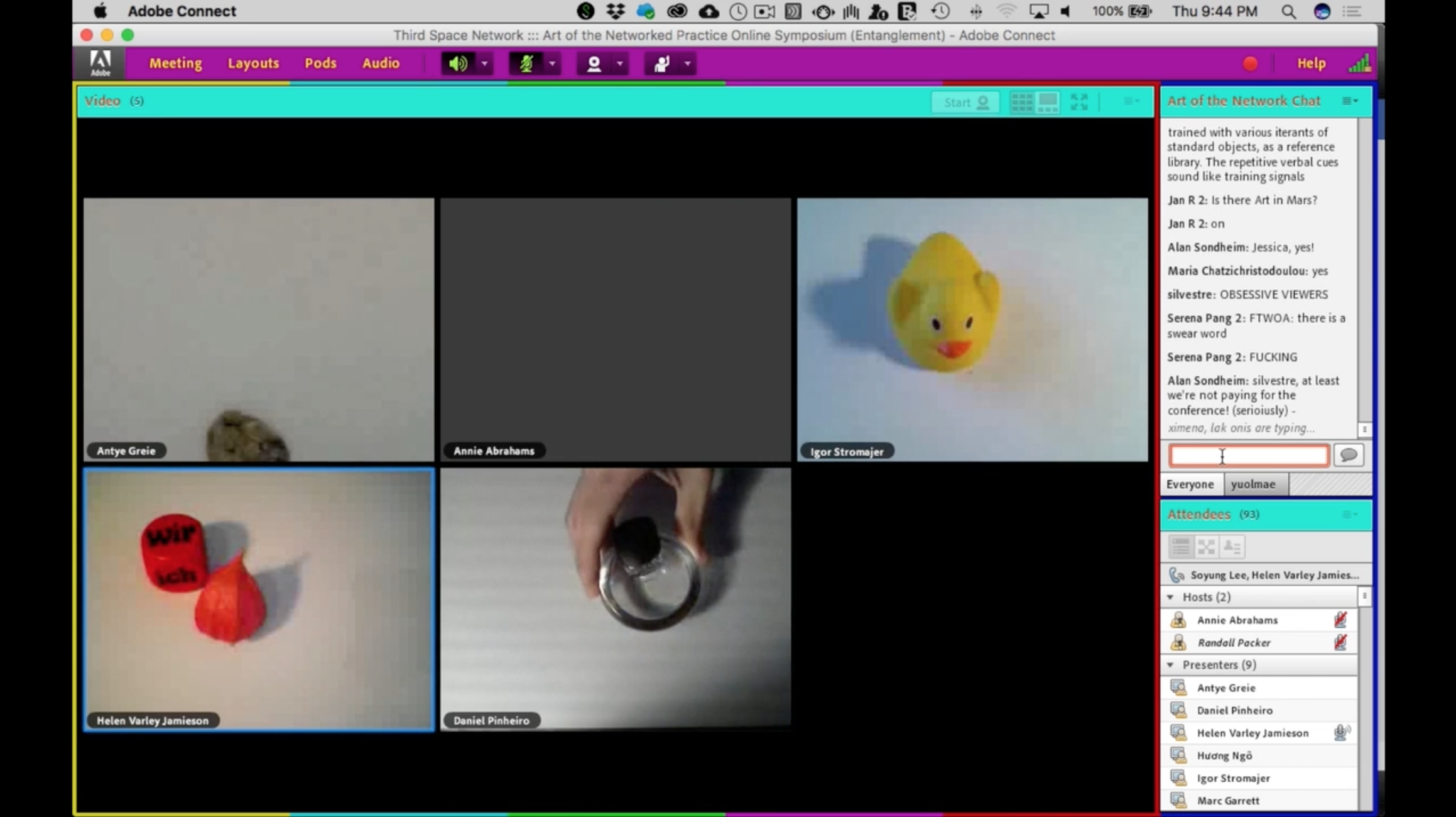 On the other hand, day three’s performances involved more cameras and with that, more varied camera angles as well. 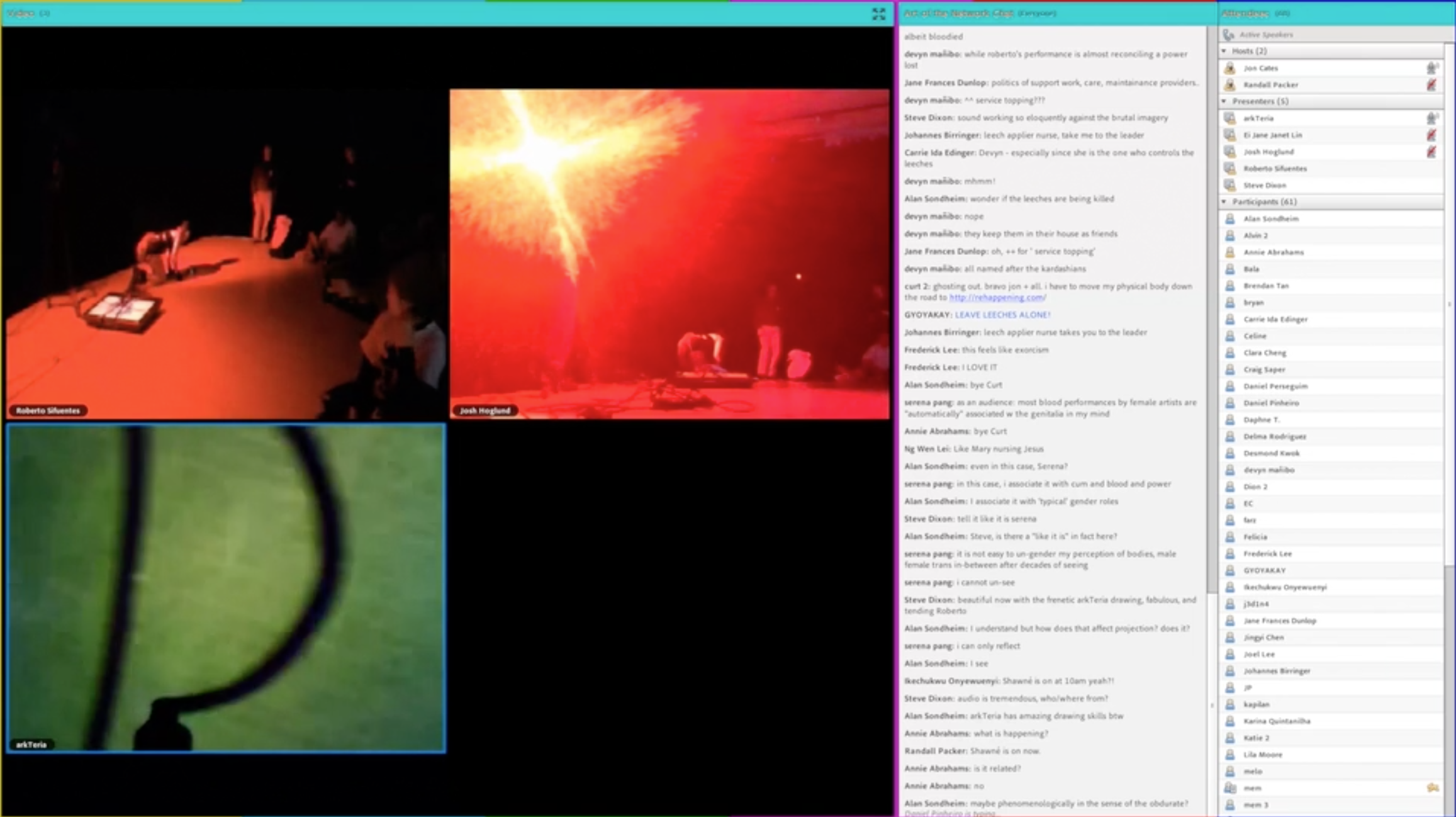 The top left view of the performance is from an angle which resembles surveillance footage while the top right seems like that of a spectator in a physical audience. This gives us, the people watching from our computer screens back at home, the feeling of prying, as if we’re chancing upon something that we’re not supposed to be looking at. Even the entire set up – dark, red lighting, suggestive costumes – looks intimate and private. Hence, this really portrays the stark contrast in both day’s performances.

All in all, the symposium really helped wrap up all that we’ve learnt in this semester in regards to glitch, third space and DIWO and it was really nice to be able to learn from these artists whose readings we’ve been learning from and it has definitely been an enlightening experience.

Cyberformance? Digital or Networked Performance? Cybertheaters? Or Virtual Theatres? …or all of the above? Maria Chatzichristodoulou.
http://www.cyposium.net/wp-content/uploads/2012/09/maria_text.pdf