Translation* for Spanish Copy written in the Production video: 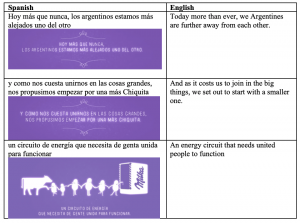 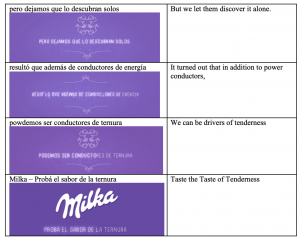 ‘Cadena de Ternura’ (Tenderness Chain) for Milka is an inspiring and thought-provoking example of Interactive Media Art to me because it spurs human interaction and a spirit of togetherness in the age where smartphones and the digital world are increasingly occupying humans’ attention and replacing human interaction.

Similar to the exhibition: Lights Contacts (Senocosme) introduced during Lecture on Week 4, Cadena de Ternura requires people in the Plaza – where the Interactive Media was placed, to engage, communicate, and work with one another to power the vending machine. The interesting aspect of this exhibition, though, was that an instruction manual or preliminary ‘how-to’ guide was not given to anyone beforehand. I.e. The people had to figure out what the exhibition was about, how to get it to work, and discover the outcome of their experiments.

The Cow is also not static. It is moved further at possibly different times of the day, or the magnitude of the crowd present, to encourage a longer human chain (more human-interaction and collaboration).

The common goal of getting a free chocolate from the vending machine unites strangers together and helps build some degree of trust between one another to join hands.

I enjoy reviewing the experience of this Interactive Media Artwork as the artwork is simple yet meaningful and strong in bringing Milka’s message across to its participants: “Dare to be tender”. It evokes elements of fun, laughter, joy, and conversations in the participants (as seen in the above picture). It is also a commercially viable Interactive Media Artwork, related to experiential marketing, displayed in a public space which allows for more public, non-exhibition goers to interact with it, compared to artworks which are placed in a museum traditionally.

Public reception towards this Interactive Media Art seems positive – both from the reactions of the users in the Production Video and online articles written about it. The following are articles (linked) published in response to Cadena de Ternura:

Copyright: All images found in this post are from the Production Video embedded above.