Write a response to the exhibition “Future World”.  Keep in mind the following questions – What is experience design and what are the possibilities of responsive environments? How might this change the way we think about the world around us and the ways that we communicate with each other?

At first glance, I had thought of a ‘future world’ where technology triumphs over man and seize their jobs and livelihood. However, “Future World” at the Arts Science Museum had shifted my thinking such that technology still needs man to function. Divided into 4 parts: Nature, Town, Park and Space, the exhibition serves to relate to the everyday perceivable things we see outside.

One such exhibit was “Flowers and Butterflies”, we spent quite a bit of time here as we’re mesmerized with the room. It is most beautiful to have the animated flowers surrounding the user, especially more so that they are interactive. They are designed such that it responds to the human’s actions, such like tapping on the butterflies (and making them faint). These set of features were not explicitly shown, but were experienced and realised by the user.

As we moved on from exhibit to exhibit, I found out that majority of the works are engineered for real-time digital interaction. Another work I was fascinated with was “Connecting Train Blocks” where coloured blocks lie on the table represents different structures/paths that connect with each other to build and form the environment.

It gives a chance for the viewer to interact and make changes to the work. Enabling them to build new pathways as they are virtually mapped out on the table. I find this set-up useful and could potentially help designers and architects for building purposes as variables change in quick-time. Another similar work was “Sketch Town Paper Craft” where users take a blank paper, colour in the object (building/plane/bus) and gets scanned into Sketch Town. The exhibit encourages users to have a part of their identity be in the digital environment.

With that in mind, I felt that most of the exhibits were meant to ignite the creativity of children, there were many colourful themes and intuitive interfaces. The ‘create your hopscotch’ lets kids have the opportunity to design their play as well.

“Future World” has accomplished a 2-way feedback system where technology and the user interacts. The user does an action and the work ‘reacts’ to user. I wonder if there could be more ways to explore this interaction other than just ‘one touch one action’ and could do more beyond screens. Overall, I really did enjoyed myself experiencing these behaviours and look forward to more fascinating works by teamLAB.

Part 2: Start to work on final project proposals – prepare three ideas for a screen-based experience that you’d like to create (it can be speculative). Prepare a slide show to illustrate your ideas. The ideas can be based on any of the field trips done so far or can be something completely new.

Augmented Reality Room (see parts of what you want to see) 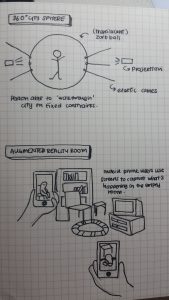 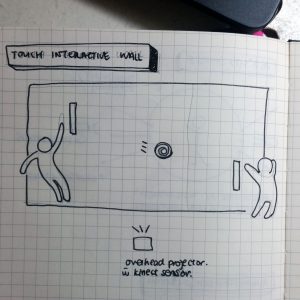 Part 3: Find 3 examples of a product/project that you think are good examples of thoughtfully designed user experience. Be prepared to support your choices.

The reading is helpful in terms of setting a design direction, and goes in depth on how to facilitate the designer for the project at hand. In the introductory chapter, Goodwin sets out the general term of design – that it is has constraints and that it must serve a human purpose. She dives into ‘Goal-directed design’, where they focus on the back-end user for the usage of the product. This method is proven to be successful and it helps even those who are weak in technology.

Through a goal-oriented process, the project will sure be much more motivated and would stand a higher chance in accomplishing the task. Goodwin presents detailed steps that every designer should undertake and possibly follow for a meaningful product.

Question 2: Would having to cater to multiple people when designing a product prove the design to be too complicated?