When to check for adulteration?

After changing my idea from an on-the-go detector to a home-based device that is a part of the cooking process, I did a quick study of the different stages that food goes through in the kitchen.

I realize that the later adulteration is detected in this journey, the more effort is wasted on all the steps before realizing it should not be eaten.

As such, I have decided that my product would be integrated to the kitchen within the first few stages of cooking. Those stages are unpacking food purchased from the market, washing the food and storing them. Storage is optional because some people would cook the food immediately while some may fridge it for later use.

Within this few stages, there are a few opportunities for intervention which I will discuss in a later post.

Where is my device placed in the kitchen? 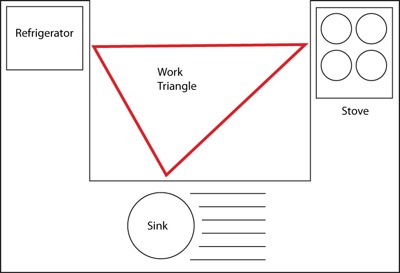 The kitchen work triangle is a concept used to determine efficient kitchen layouts. The primary tasks in a home kitchen are carried out between the cook top, the sink and the refrigerator. These three points and the imaginary lines between them, make up what kitchen experts call the work triangle. The idea is that when these three elements are in close (but not too close) proximity to one other, the kitchen will be easy and efficient to use, cutting down on wasted steps.

Based on this concept, I imagine my device would be placed somewhere in between the sink and the refrigerator because it is to be used within the unpacking, food washing and storing.

learner and a meaning seeker in all things View all posts by Ava P.