I’m bad at updating this space consistently! So here is

Presenting, the revised draft (02) of my short narrative.

This is the script that I will be sending out to prospective actresses for the Casting Call. Attached along with the script, will be the following screen-shot excerpts for the actresses to do a video audition to.

Video Audition Excerpt for the role of Mei Qi:

(Includes extended dialogue, so that the actresses may have more material to play with. My instructions to them would be to just be fun and bold with it; this section is surrealistic so I feel they can afford to be more dramatic if they’d like to.) 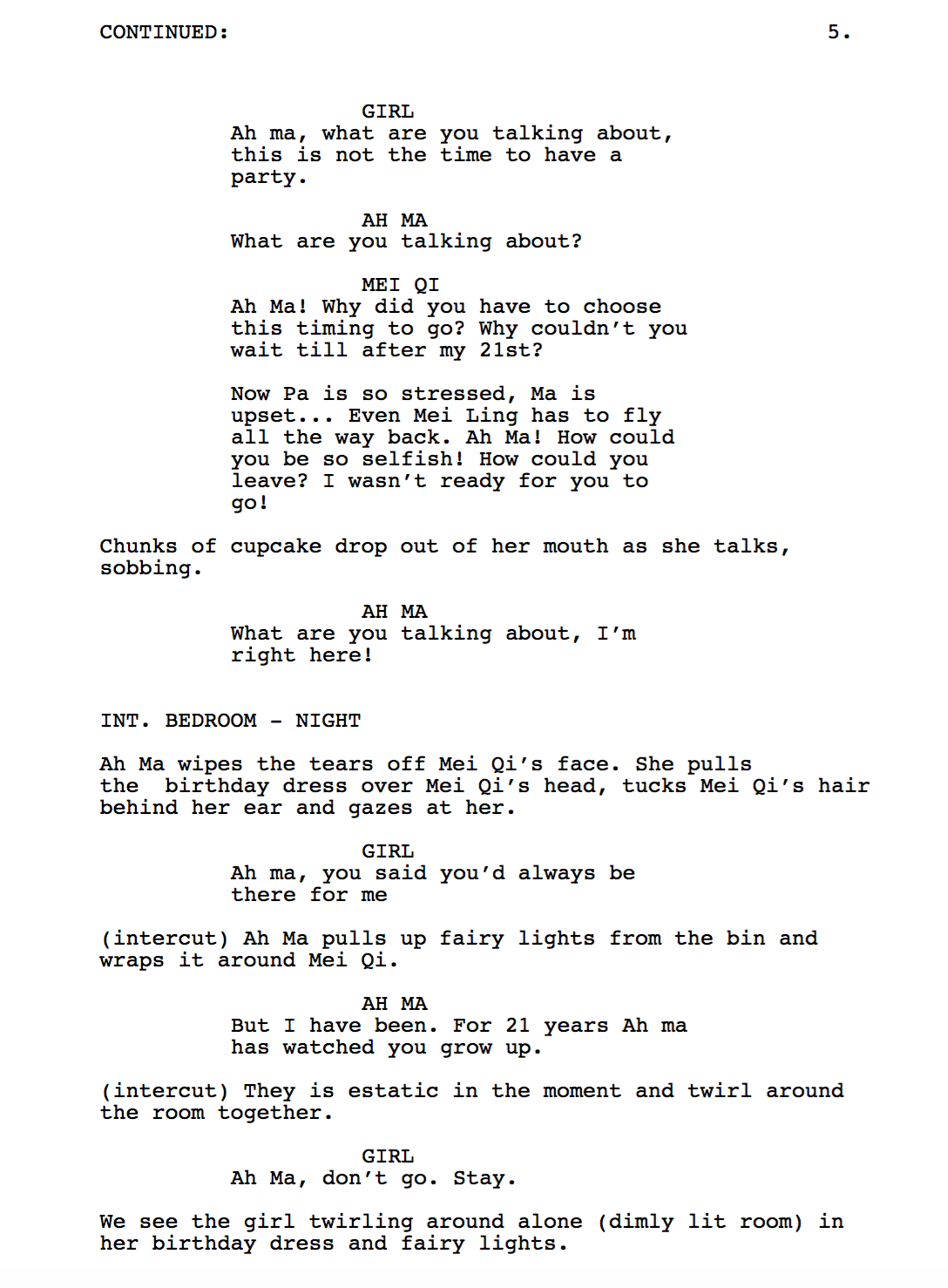 Video Audition Excerpt for the role of Ah Ma: 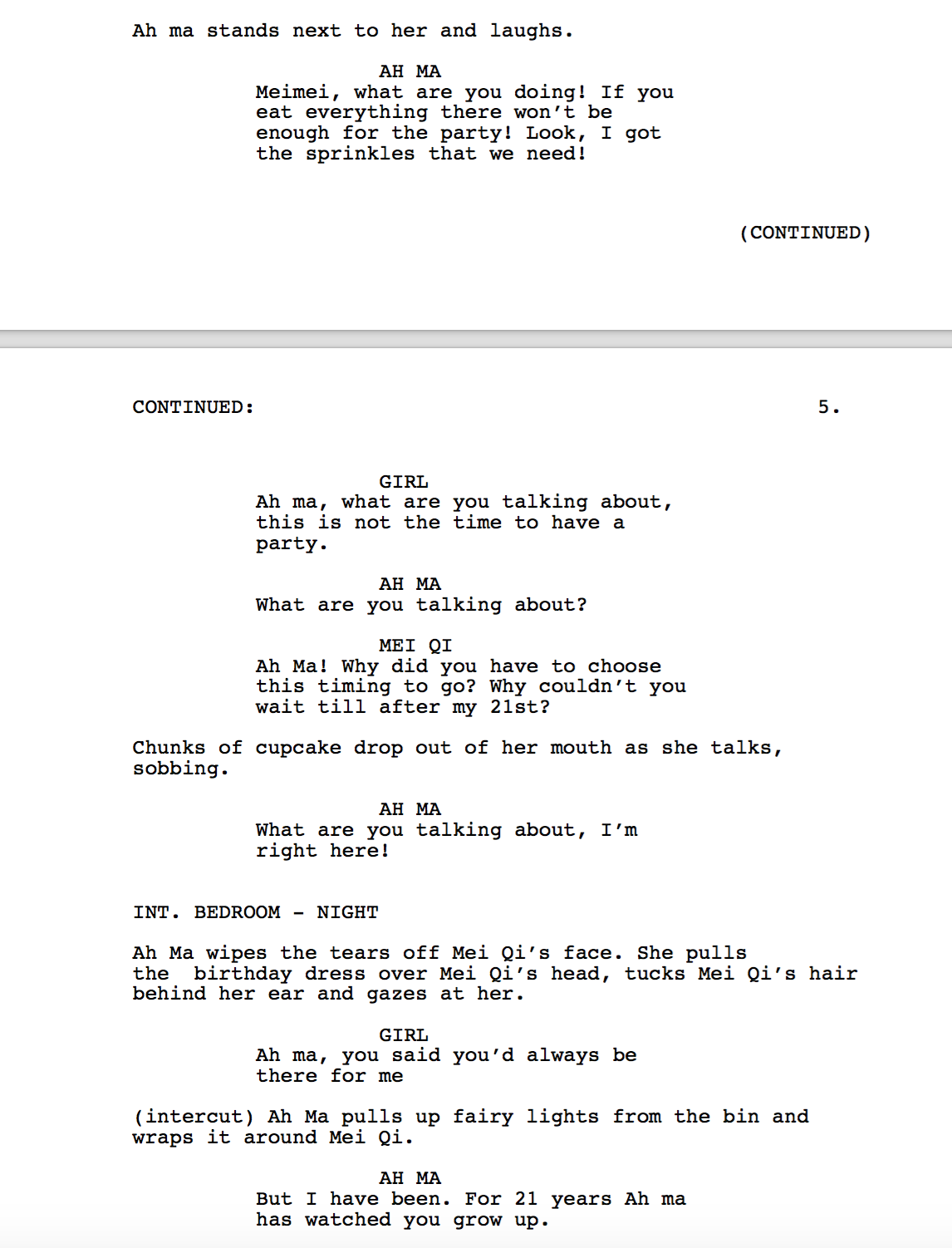 After a mini creative crisis earlier this week, my ideas have morphed yet again.  I am now proud to say however, that I’ve a narrative I will be committing to! It still revolves around a girl’s birthday party, expectations, and the dynamics of a family unit.

Logline: A girl’s grandmother passes away on the week of her birthday. Her party plans are at stake in the wake of her grandmother’s death. Underlying her adamant desire to still celebrate her birthday, is a hint of childlike denial as she struggles to cope with the unexpected death of a loved one.

Here is the current script:

I feel I will have to improve on my dialogue and the narrative flow.

I have selected the scene in the Bedroom to rehearse, in which Ah Ma reappears to the girl (after her death) and dresses her up in her birthday gown and other trinklets.

This scene is pivotal because the girl is at her most vulnerable state. She collapses into a childlike state, and fantasises that her Ah Ma is still very much alive. Her Ah Ma pacifies her, dresses her up; reassuring her as though she was a little girl again. For a moment, the audience may even be lead to believe as well that this could really be reality, and that the girl may be able to have her party after all.

I pictured this scene would be made coherent, largely through the editing (Post-prod). Thus, we would shoot one perspective (in MS and MCU) where we witness the girl and Ah Ma back together; almost suspending the audience’s disbelief that the Ah Ma really was still alive. This scenario would then be intercut or concluded with a wider shot of just the girl alone in the room – revealing the sad reality that the Ah Ma has indeed passed away, and it is merely in the girl’s imagination that she is still present.

During the workshop, I rehearsed only one scenario: in which Ah ma and the Girl are both concurrently in shot. It became evident that in order to properly communicate this apparition, I may have to decide whether the girl fully acknowledges Ah Ma’s presence (with eye contact), or actually looks forward while talking to the apparition of Ah Ma beside her (such that it is more obvious that representation of Ah Ma is merely a visual extension of her imagination).

There is much to think about. Hahah blocking and camera position is also going to depend largely on the location I feel.

Godspeed to all of us hahaha 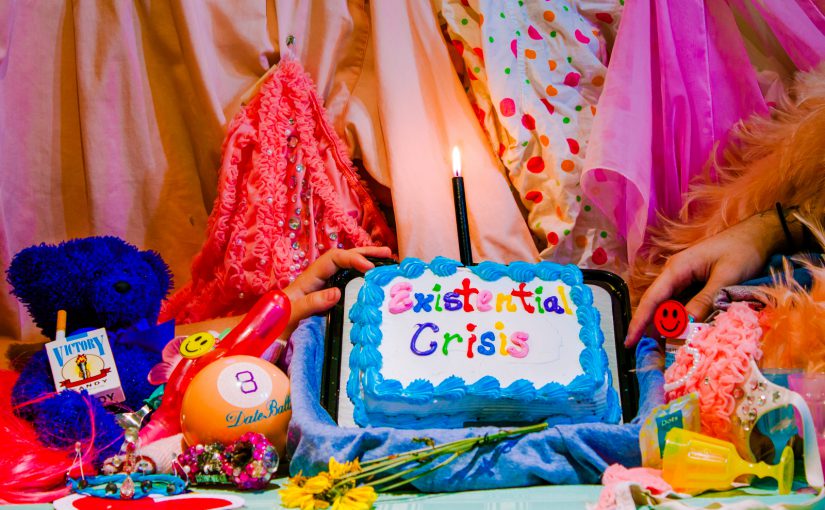 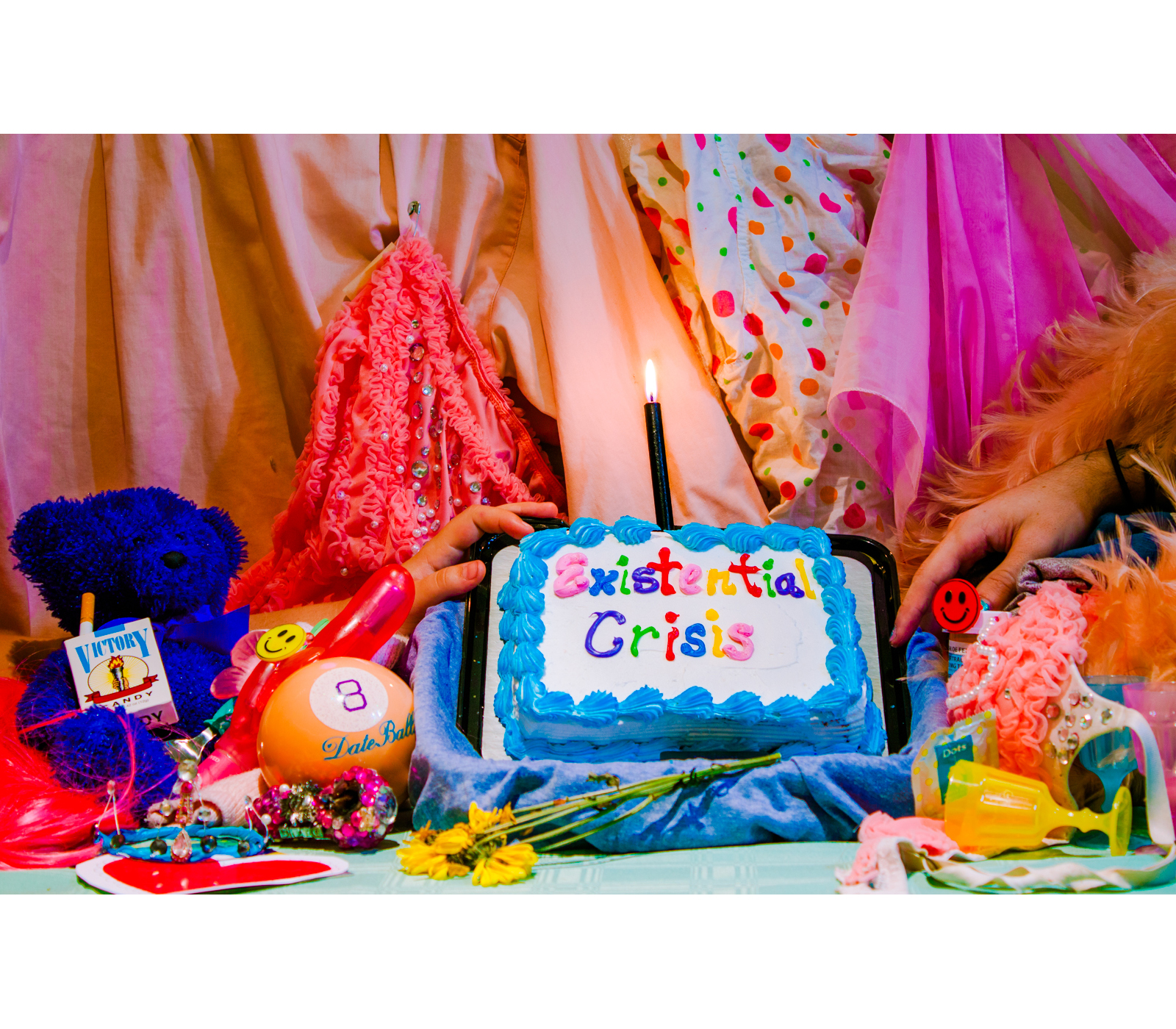 Logline: A girl comes-of-age and bears the brunt of familial and social pressures. She wrestles with a mind that is jaded, and a heart that yearns to hold on to youth and innocence.

Her emotions and thoughts manifest themselves into her surroundings; ideally represented by a surreal and playful visual landscape.

The shot opens with a birthday cake crashing into the ground. It is someone’s 21st birthday party. It is a lavish set-up. But a shrill scream cuts through the air and drama erupts upon this mishap. The protagonist sits in the foreground, indifferent to the cacophony.

Protagonist V.O. “I don’t get what’s the big fuss with turning 21.”

Shot of smeared icing on the floor; “2” and “1” candles smothered.

Cut to, shot of vibrantly coloured icing being piped onto cupcake. Protagonist works part-time at a bakery.

Shot of protagonist sinking into the bathtub. The water is cloudy like milk, and multicoloured froot-loops float around her as she submerges.

Match cut to froot-loops in a bowl. Protagonist has her breakfast.

Shot of protagonist submerged in a pool.

“A pool always looks shallow from the surface. Till you’re in deep.”

Shot of a pool, tile lines undulating from water’s surface.

While in the car, protagonist looks out of the window and sees the teletubbies.

On a second glance, it was actually construction workers in coloured overalls.

Chinese restaurant. Big round tables covered in white and a large lazy susan. It is a family lunch and the protagonist herself is turning 21. Many family members approach the protagonist and probe her with existential questions. (‘What are your plans for the future’ .. ‘When are you going to get a real job?’) The camera’s focus is on the protagonist (blank stare), and these voices are heard off-screen.

Waiters in the restaurant enter. ‘Happy Birthday’ music is played in the background, as the waiters break-out into a rehearsed formation/dance.

On a second glance, the cake merely reads: happy birthday

Protagonist walks through a public park in her working uniform. She passed by a group of elderly Uncles and Aunties practicing Tai chee. They move in a rehearsed and unified manner, and repeat after each other, existential chinese phrases or sayings (spoken in english).

Notes: Here’s me just throwing out a very rough plot! I’ve stowed up in my mind a couple of eccentric visuals that I feel could be quite experimental and that could bear metaphorical meanings… So, this was an attempt to string some of them together.

I’m interested in theatrical/comical satires and a surrealistic art direction, and hope to go boldly in that direction. I’m influenced by and really admire films like The Taste of Tea and Mon Uncle. I’m also very impressed by short series ‘Don’t Hug Me I’m Scared” – the production design for that is boggling and the storyline irreverent yet attractive. I don’t mind revising and heading in a simpler and shorter direction like such, and I hope everyone will be open to me heading in a very different direction like such!

I’ve got to admit, I never like to answer these questions. I don’t think I could choose, and at the instance I am asked it the answers just escape me.

That being confessed, I shall siphon off the top of my head, this lovely Japanese film I recently revisited: Nobody Knows

I watched it when I was much younger, and since then it stuck with me, but I never knew what was the title of the movie! It was interesting to finally find it and watch it again years later

As for favourite Director, Imma go with the famed Wes Anderson.

Over-quoted name? Maybe. But his humour, quirky direction, and Art Direction is beyond admirable; why not!