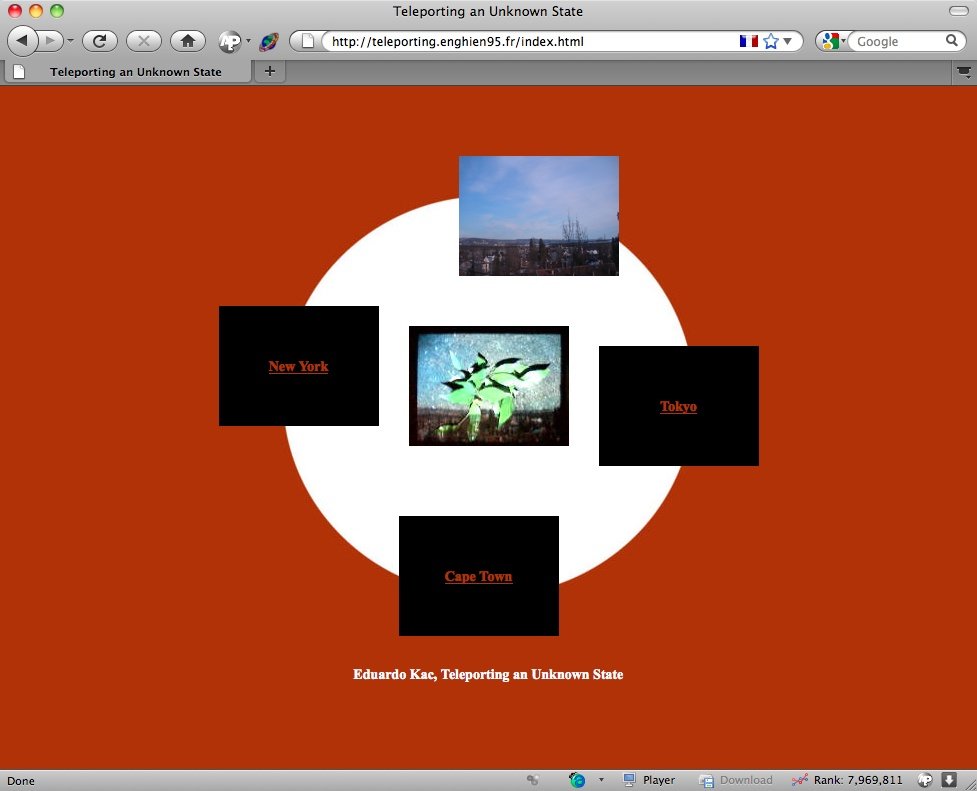 “My work hinges, to a great extent, on hybridity and ambiguity. While through the first I integrate elements often considerate disparate, by means of the second I articulate the tension and multiplicity of meanings inherent in the work. ” — Kac

Eduardo Kac, is known for pioneering the synthesis of telematics and biology in his artworks. His approach is similar to that of Telematic Artist Stelarc’s exploration of integration of machine and the body, however further ‘extremized’ to an unprecedented skin deep level – Kac pioneered ‘Transgenic Art’ in 2001 when he created an ‘Artist Gene’ and his  infamous fluorescent Rabbit tilted ‘Alba’.

His works are based on the fundamental philosophy of communication between ‘entities’ – biological, digital and machine. Through different works he expresses different communication functions and the phenomena of their underlying complexity and fluidity, brought about by the post digital age. Kac is also concerned about the implications of these functions on culture, experience and our psyche. His works range from radical and ‘grotesque’ works such as ‘A-positive’ (Figure 1) where a human and robot were hooked up intravenously, to more nuanced telepresence works such as ‘Rara Avis’ (Figure 2) where participants viewed a digital aviary from the POV of a Tele-robotic Macaw. 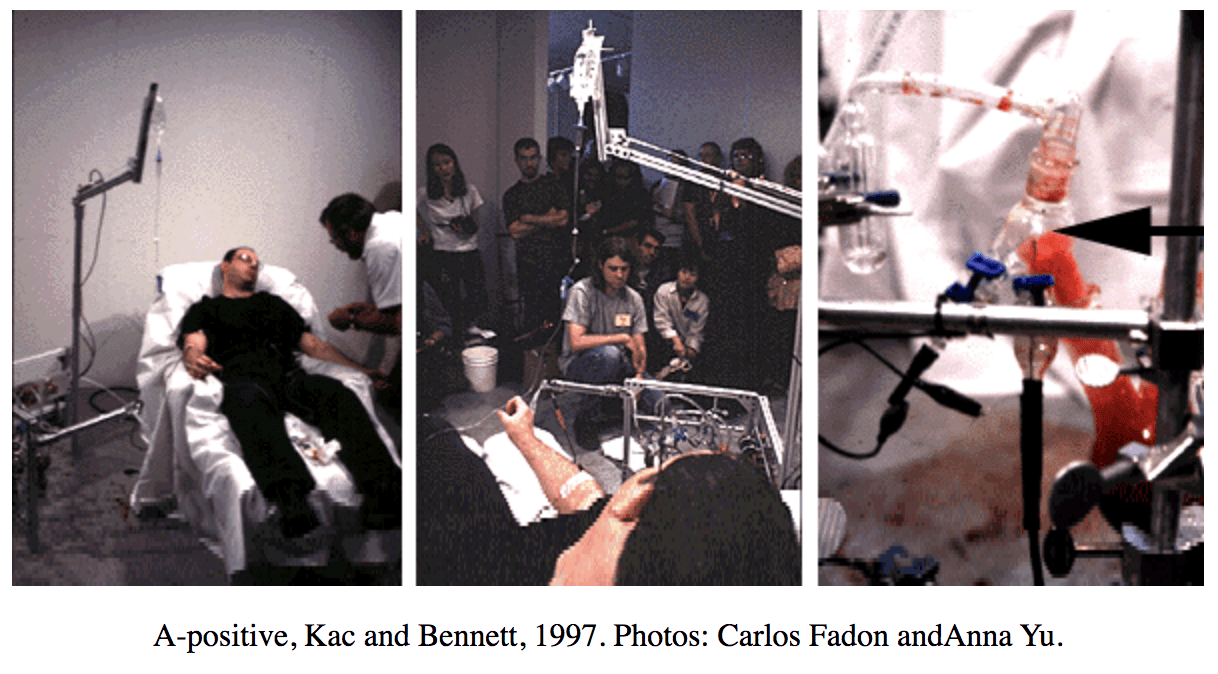 In his early works, he employed a deliberate and direct interference of tech within the body or biological system. Contrastingly, In today’s context of hyperreality, alteration, interference and mutation occur on a psychological level. Albeit different, the impact is equally profound given the rise of alternative and multi realities.

‘Teleporting an Unknown State (1994 – 1996)’ is a piece that bridges the ideas of both physical and psychological ‘interference’, and still holds relevance today – it creepily foreshadowed the profound veracity of the shared hyperreality we are ‘plugged’ into in our contemporary digital age. 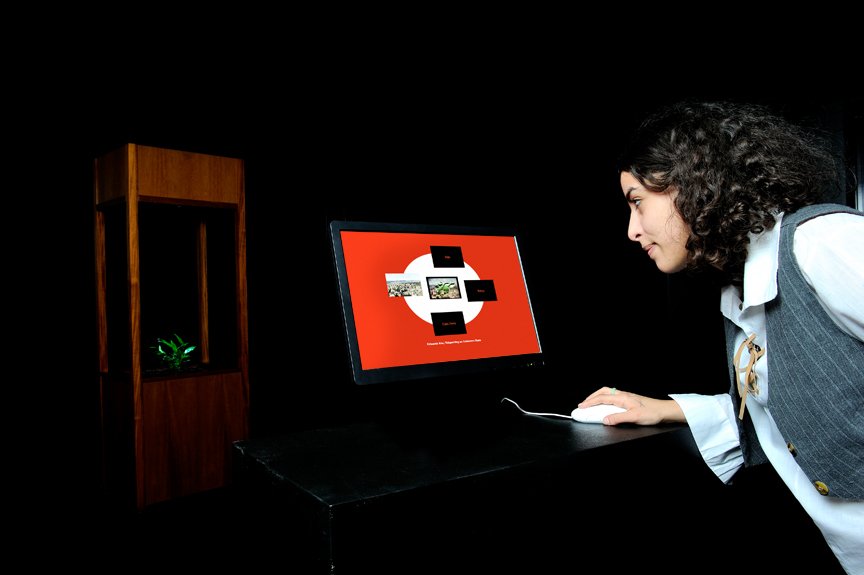 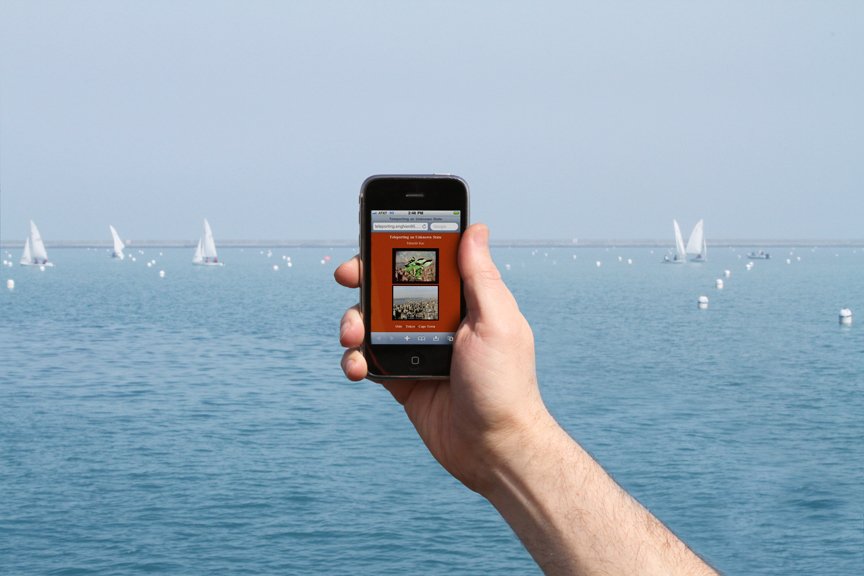 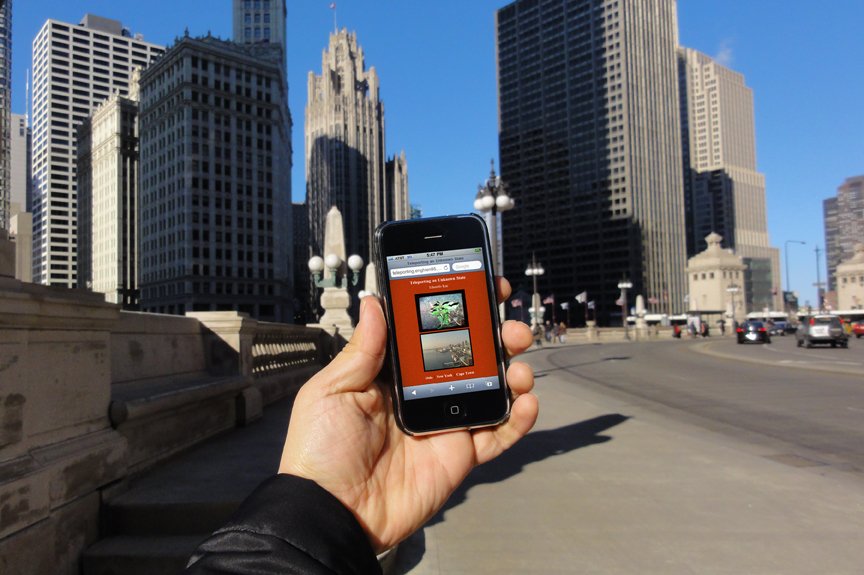 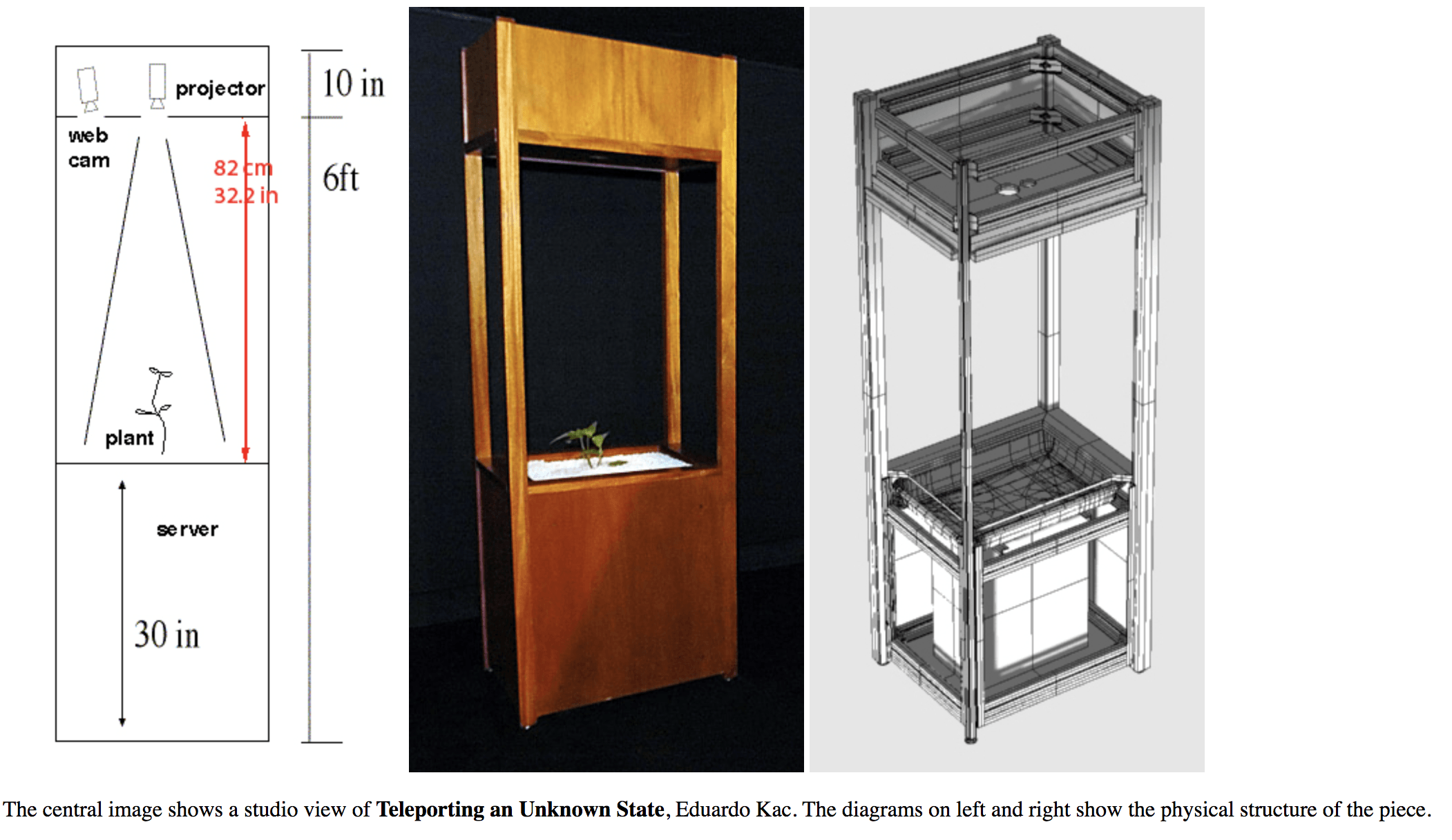 “Through the collaborative action of anonymous individuals around the world, photons from distant countries and cities are teleported into the gallery and are used to give birth to a fragile and small plant. It is the participants’ shared responsibility that ensures that the plant grows as long as the show is open.”

‘Teleporting An Unknown State’  (1994-1996), explores the idea of using the internet, a circuit of different entities via mobile phones, computers and personal devices, to support sustenance to a living organism. It was a collaborative interaction that required remote users to transmit lights from their ‘cities’ to a projector, which then converged the lights emitted from the received input (videos and images) onto the plant. The seed of the plant was placed in soil on a pedestal in a pitch black room with the only light source being that of the suspended video projector. The biological process of photosynthesis was an integral aspect of the work.

The work was displayed as an installation where viewers could see the growth process of the plant and only the cone of light being emitted from the projector — “The circularity of the hole and the projector’s lens flushed with it were evocative of the sun breaking through darkness.” Kac.

The work essentially prophesied the sheer power and affect the interconnected web and IOTs (Internet of Things) has over us today. ‘Teleporting An Unknown State’ treated it as a life-giving entity and it has indeed become a source of sustenance for many complex human relationships and attributes although in a non literal way. Its conception and reception was probably novel in its time and participants were eager and curious to witness this obscure notion of ‘hacking’ a biological process. The seductive idea of being bestowed upon the power to provide life, coupled with the convenience to do so via their personal devices, certainly had to be enticing. However the very act of using the Internet as an intermediary device to produce ‘artificial sunlight’ to trigger a naturally occurring phenomena, foreshadowed the replacement of physical reality with virtuality as we know it today.

This underscores the inherent contemporary human instinct to compress physical experiences into digital and virtual ones. Our ‘instincts’ supersede any critical or conscious attention to the medium we use. We do not particularly care if the way it is transmitted is ‘artificial’ or real, as we have increasingly become conditioned to engage whichever option that favours the factors we rank important in this digital age — convenience, efficiency and immediacy. Kac triggers an intuitive satisfaction in us, by allowing us to sustain the life of a plant and harness the ‘magic’ of the phenomena of photosynthesis.  This emphasises the potency of the ‘Interconnected Web’ to act as an extension of our capabilities and executor of our desires and fantasies. Not only has it enhanced our abilities to materialise them but it also short circuits the process through which we  attain them.

In retrospect, Kac’s ‘Teleporting An Unknown State’ then begs us to be critically aware of the extent to which IOTs have grown today. There are now a multitude of mobile applications available for people to own and grow virtual plants, pets and even humans. With the emergence of Artificial Intelligence, Kac’s simple idea of a virtual intermediary interface, has morphed into a multi faceted one that engages all our senses at once. The line has been further blurred, and our interaction has become fully immersive. Rather than being fully conscious of our ability to simply take a picture to ‘light up’ a detached physical plant, we have synthesised the extended capabilities of the ‘net’ in our subconscious psyche and our biological instincts. We have adapted to respond to Virtuality as veraciously and as sensitively as we do to Physical Reality. In Japan (2017), the company Gatebox created the World’s first Virtual Home Robot, a holographic character equipped with facial and vocal recognition. Users would be able to communicate with this virtual character via their Mobile Devices. Some men in Japan have even adopted this virtual entity as their significant other. Fundamentally, here too a natural process (of cultivating love and human interaction) has been ‘digitised’, making it an eerie contemporary recreation of Kac’s ‘Teleporting An Unknown State’. Essentially, communication between living and non living entities has shifted from being just dialogical to natural and emotional.

This extreme progression in just 20 years from function to full immersion, then raises significant questions about our future progression. Acknowledging the increasingly blurred distinction between physicality and hyperreality, will human communication be fully abstract eventually? or will ‘virtuality’ adapt to be able to operate instinctively and reactively with intuition?

Is the ultimate goal to virtualise every aspect of the human condition and capabilities?

It indeed is a seductive idea that promises immortality in the digital scape —instead of simply sustaining a plant, we now have the potential power to sustain and alter our own lives, not just in one reality but simultaneously in multi realities. However, would we want to irreversibly plug the most intimate and emotional aspects of ourselves into the connected ‘net’ in return for this ‘Utopia’?

Initially, before experiencing the session, I was honestly sceptical of the potential take away I would gain, based on previous experiences of such exhibitions where the educational content was not translated convincingly to the participants. However, “Dialogue with Time” proved to be the exact opposite of that and it was via their technique of Role Play, that we as participants were able to empathise with The Central cause of ‘Ageing’. While role playing as elderly, manoeuvring through intentionally modified tasks to mimic their struggle with simple daily tasks, I was able to gain insight into this otherwise foreign demographic.

The first sharing segment where we identified with pictures we felt depicted the idea of ‘Happy Ageing’ best, it gave us a chance to consider in that moment, what we ourselves would want our future to look like. Often we are so engrossed and obsessed with living our contemporary lives (which is inherent and natural of course), that in hindsight, we fail to consider the implications and changes we will have to brace ourselves for as we age. I picked a card with a couple in embrace and in old age. To me, ‘Happy ageing’ was simple: being able to grow up and live life to the fullest with the people you love.

In retrospect, it puts into perspective how despite that might seem like an achievable ideal, in reality many senior citizens face the pain of living in loneliness once their spouses pass away. It is hard for us to imagine a life of loneliness when we are so used to being surrounded by people, in our youth. However that sharing session, struck a chord and urged me to empathise with the fear, unpredictability, and unease many of the elderly would have to grapple with.

The sharing by our senior citizen guide gave us further insight into her own growing process and how she coped with both physical and mental changes brought about by ageing. It is rare that we have a chance to sit down with and talk to someone of age unless we live with our grandparents. Hence for me it was a meaningful opportunity to remind myself that ageing was a significant and important that issue that deserves attention. 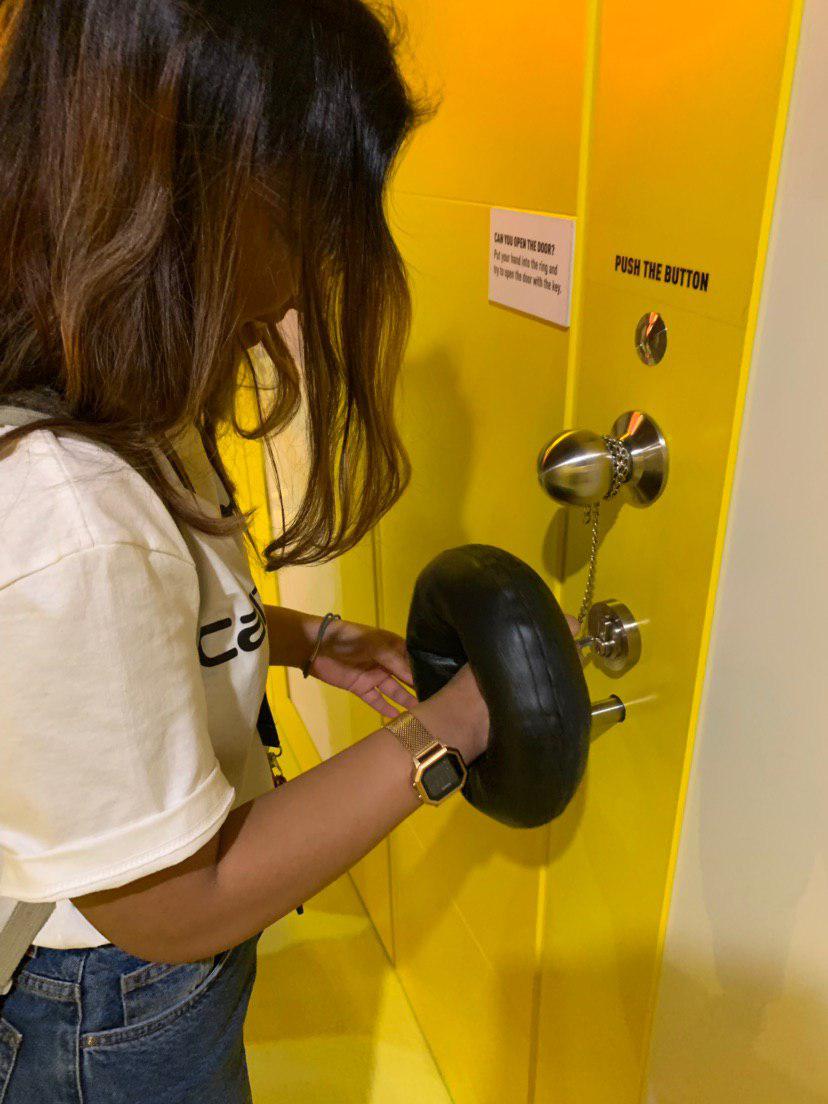 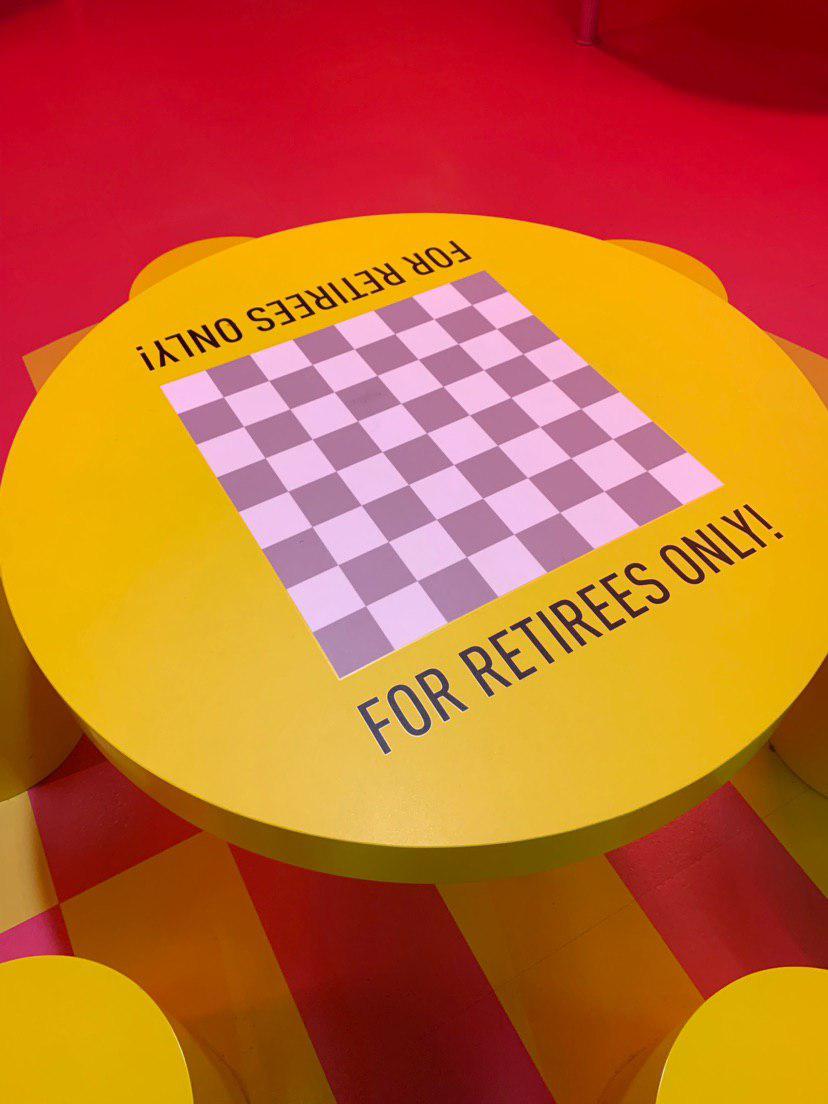 The main benefit would be its effectiveness in contextualising and providing us with a clear parameter to think in. It coerces us to be focused on our thoughts and it is confrontational in its treatment of the issue at heart.

For the central segment with interactive stations. We were directly challenged to complete simple tasks, imposed with the same limitations elderly face. For example, hand tremors where we had to unlock a door while resting our hands in a shaking loop. The confrontational and direct approach of the stations conveyed the sense of seriousness and urgency of the issue. Instead of being interpretative in its presentation and treating us a a general audience, our characters as old people, effectively enabled us to be convinced of the issue with immediacy. Certain people were also pulled out to sit out, to invoke the idea of retirement. It echoed the idea of the inevitable succumbing to loneliness. Personally I was confident that I would be able to clear all the stations with ease, but was surprised when I fumbled myself. There were moments I was uncomfortable, as it did make me feel momentarily displaced from normalcy. Being forced to think about and reflect while under the guise of a role, allowed me to derive a new perspective.

Words that came to my mind whilst in role : Frustration,  Slow,  Burden.

While people were waiting for us, the fact that we were taking time to complete the station due to its difficulty mirrored similar issue elderly in real life deal with daily. Role-Play allowed me to associate with relevant ideas that I otherwise would not identify with usually.

Role Playing would mostly be effective when we as designers are trying to understand challenges that our target audience deal with, (the same challenges we aim to resolve via our design output). It allows us to have an active rather than passive approach towards our design process when we first hand are able to experience what they do. For example, for people with disabilities who are wheel chair bound – role playing to understand the difficulty many ‘normal’ infrastructure designs pose for the manoeuvring of wheel chair bound individuals. Apart from physically changing our experience, role playing also more importantly contextualises the way we absorb information around us. It attunes us to receive information based on the perspective of our target audience, as we interact with them and in their shoes. For something less physically apparent such as trauma, role playing may help us understand heightened sensitivity and trigger response this demographic has. All these then help us as designers be mindful and targeted in our design solutions. It also helps us identify what to focus on and what to avoid that may be detrimental to their betterment.