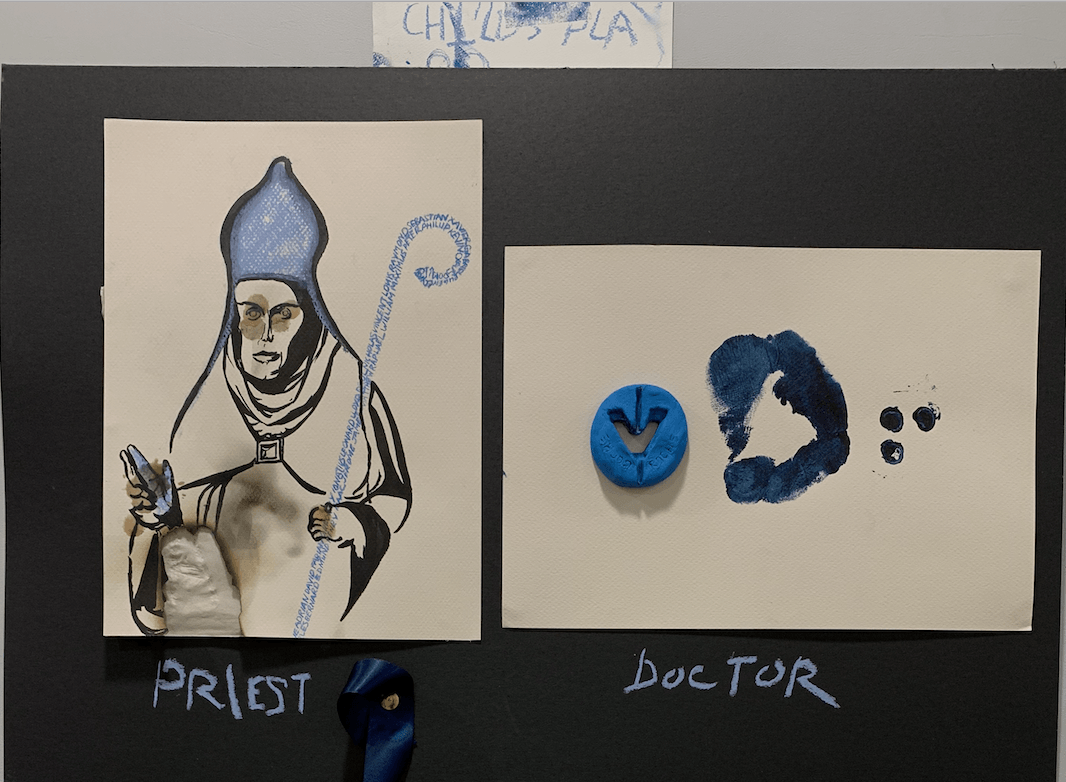 For this project brief, we were tasked to use typography to illustrate and express four different occupations that we aspire to be — fictional/real.

My concept for this assignment was to create a satirical and ironic piece comprising of four different occupations. I wanted to use the distinctive traits of my personality to highlight and explore seemingly glorified ‘dream’ jobs. Most people would describe or view me as a hedonist — someone who’s main goal in life is too indulge/over indulge in all sorts of ‘pleasure’. With my own personal experience in having lived through such a phase previously, I wanted to use this idea of indulgence to bring out the dark undertones or job hazards that masquerade behind the facade of very prestigious occupations. I also wanted to approach this assignment from an adolescent perspective as many kids are often innocent and when they think of ideal dream jobs, that are unaware of the potential ‘side effects’ and hazards that deeply plague adults with these jobs. This juxtaposition of child-like innocence  with a very matured and layered insight into the dark sublayers within my piece, further amplifies the themes of irony and satire.

I decided to use traditional medium for a more raw yet child-like feel, in line with the overarching theme.

I wanted to use typography as something more visual rather than focusing on the solid form of the letters themselves. Hence I explored the use of upper and lower case forms, and finding objects that have a similar silhouette to that of my chosen letters. I also wanted to explore both the use of positive space of the stroke of the letters themselves, and the negative space within these letters. Below are some artist works that I drew inspiration from. 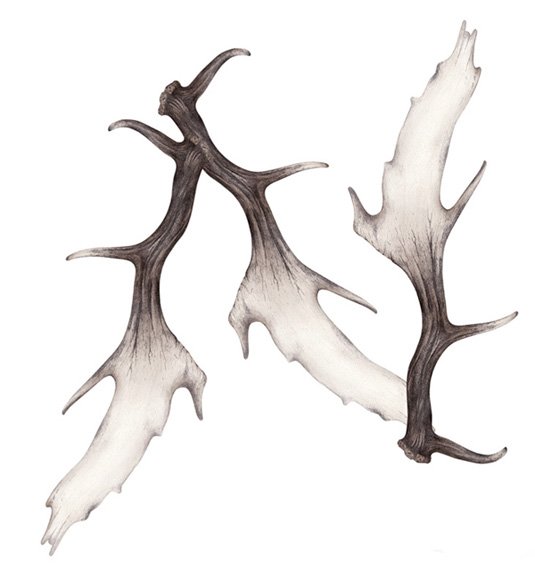 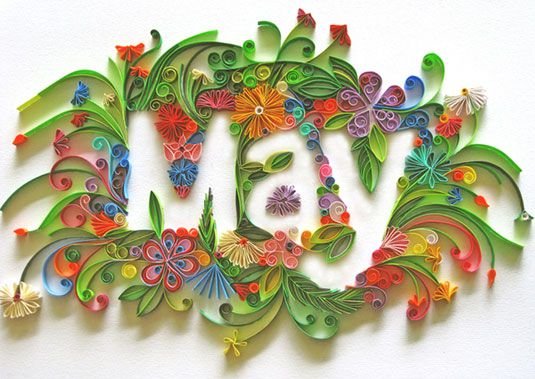 May by Sabeena Karnik (use of negative space of letter forms)

The concept for my final pieces were centred around the idea of ‘Child’s Play’ and the visual  juxtaposition of adolescent innocence with subtle irony. It was also an exploratory piece injected with my own personal hedonistic trait. Hence I wanted the overall pieces to be emotive and tactile. I decided to draw upon inspiration from Abstract Expressionism/Expressionism and various Art Styles to realise this concept visually. Below are some of the techniques or inspiration that I appropriated for my final works. 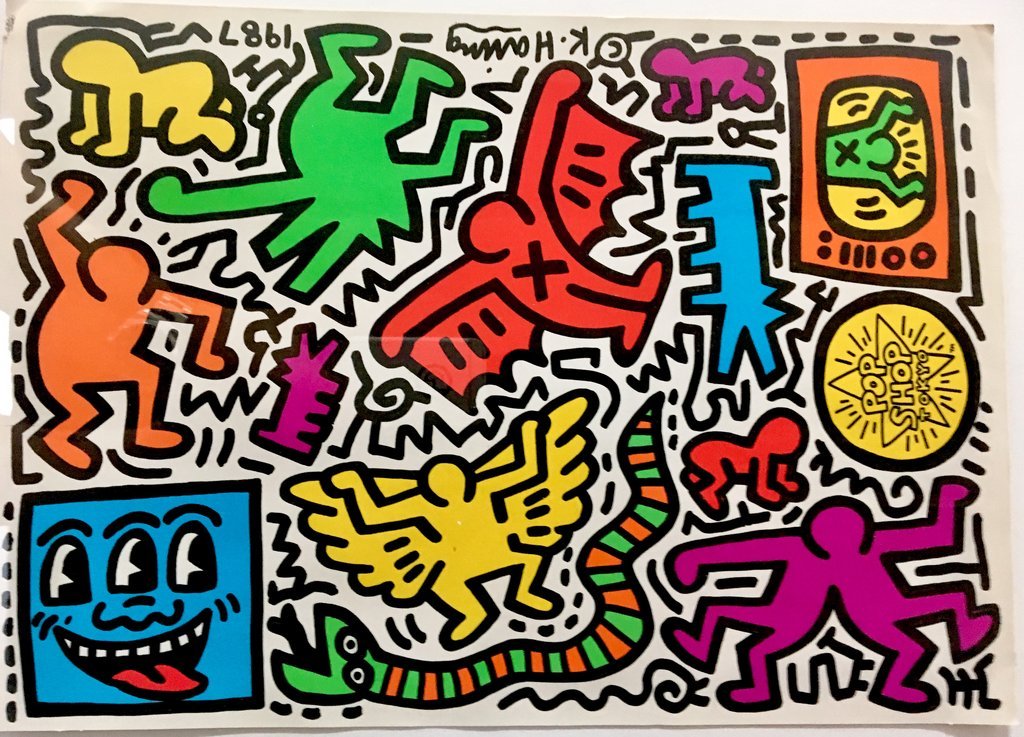 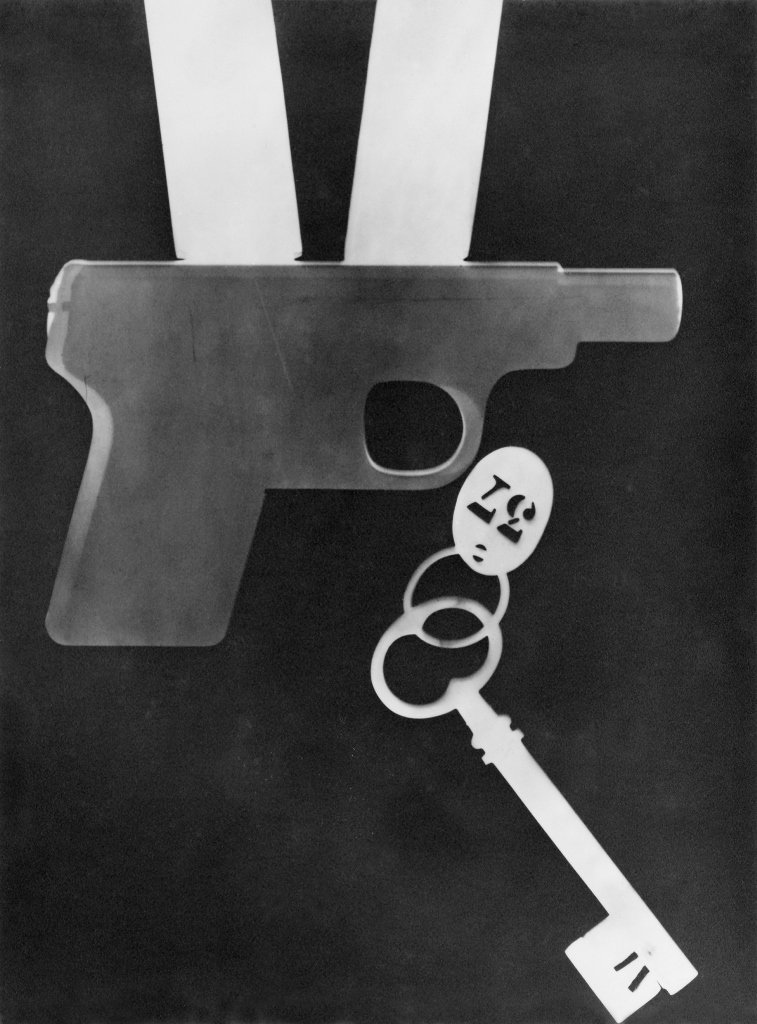 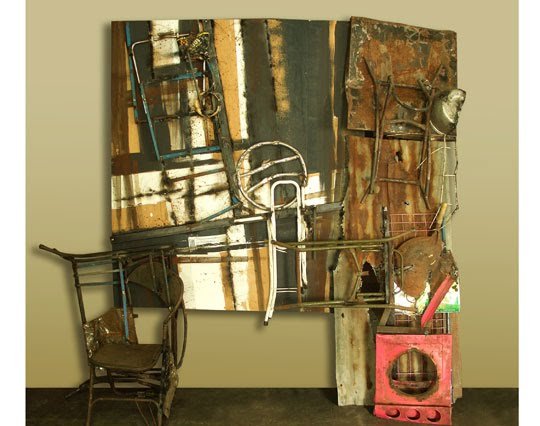 Getting my hands ‘dirty’ to me, was an important process to bridge my initial concept and my final work. It evokes the idea of ‘Child’s Play’ while at the same time captures concept of the stains and scars that are left behind when one is tainted by the dark layers that plague my chosen occupations. 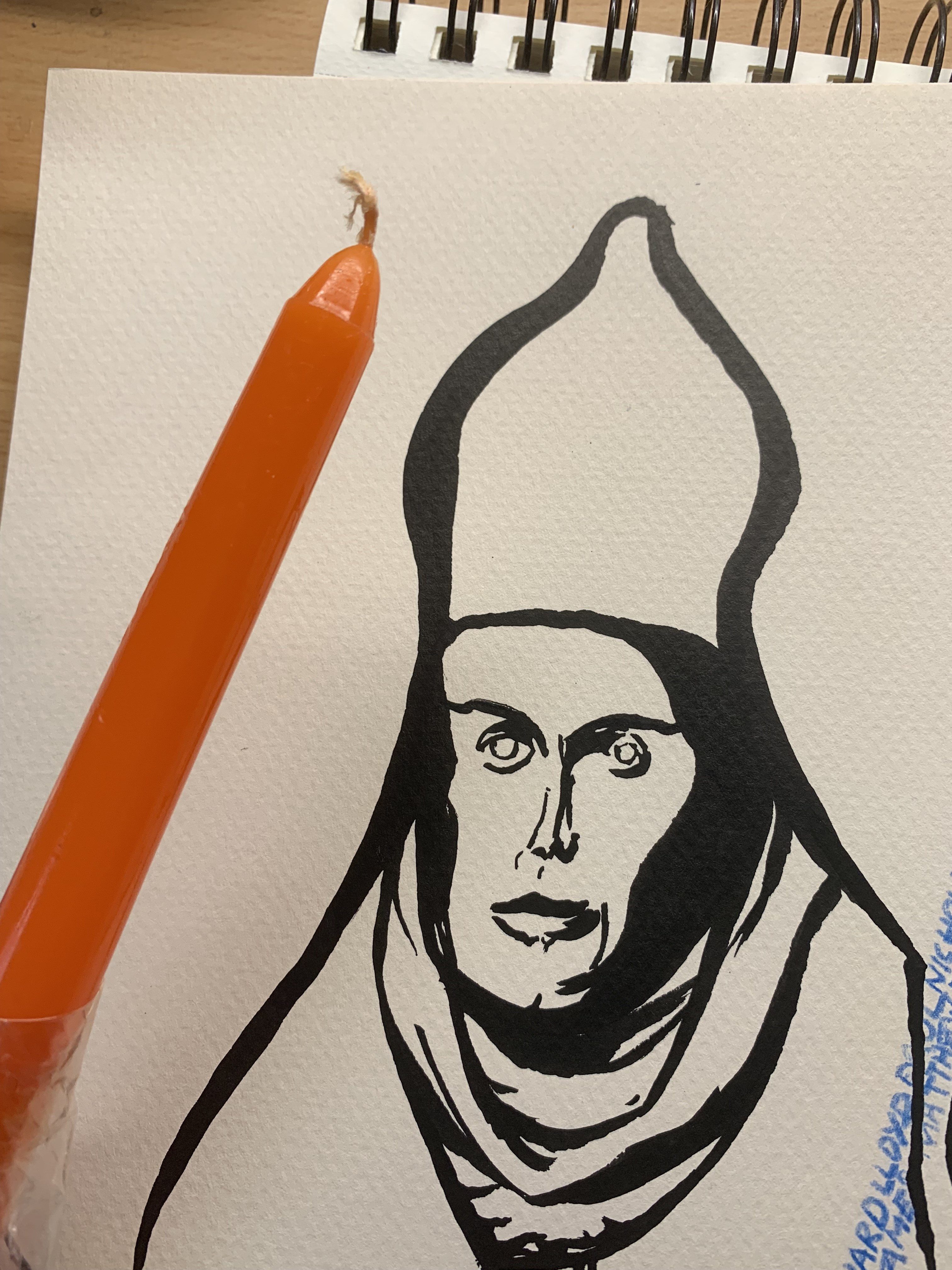 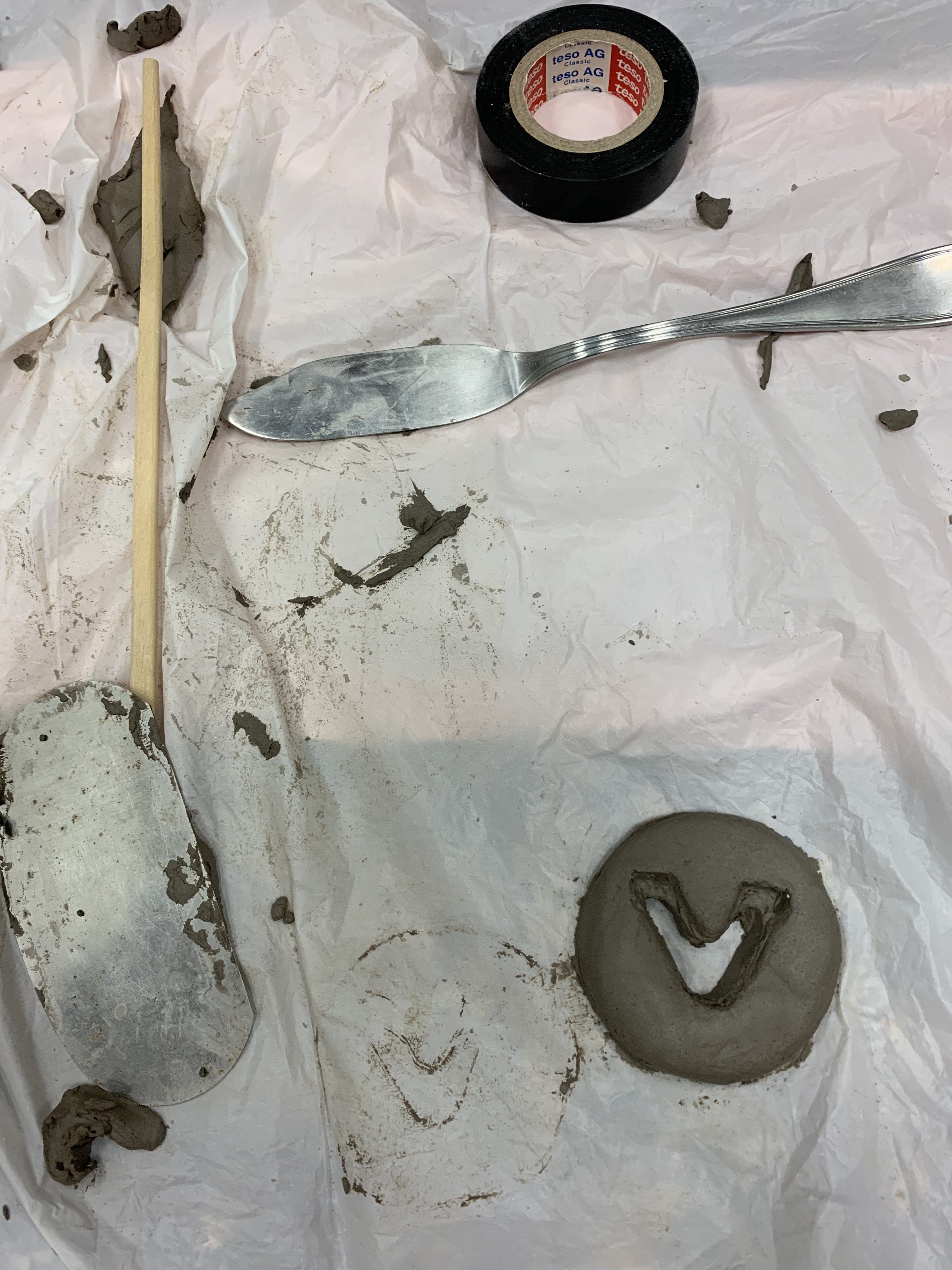 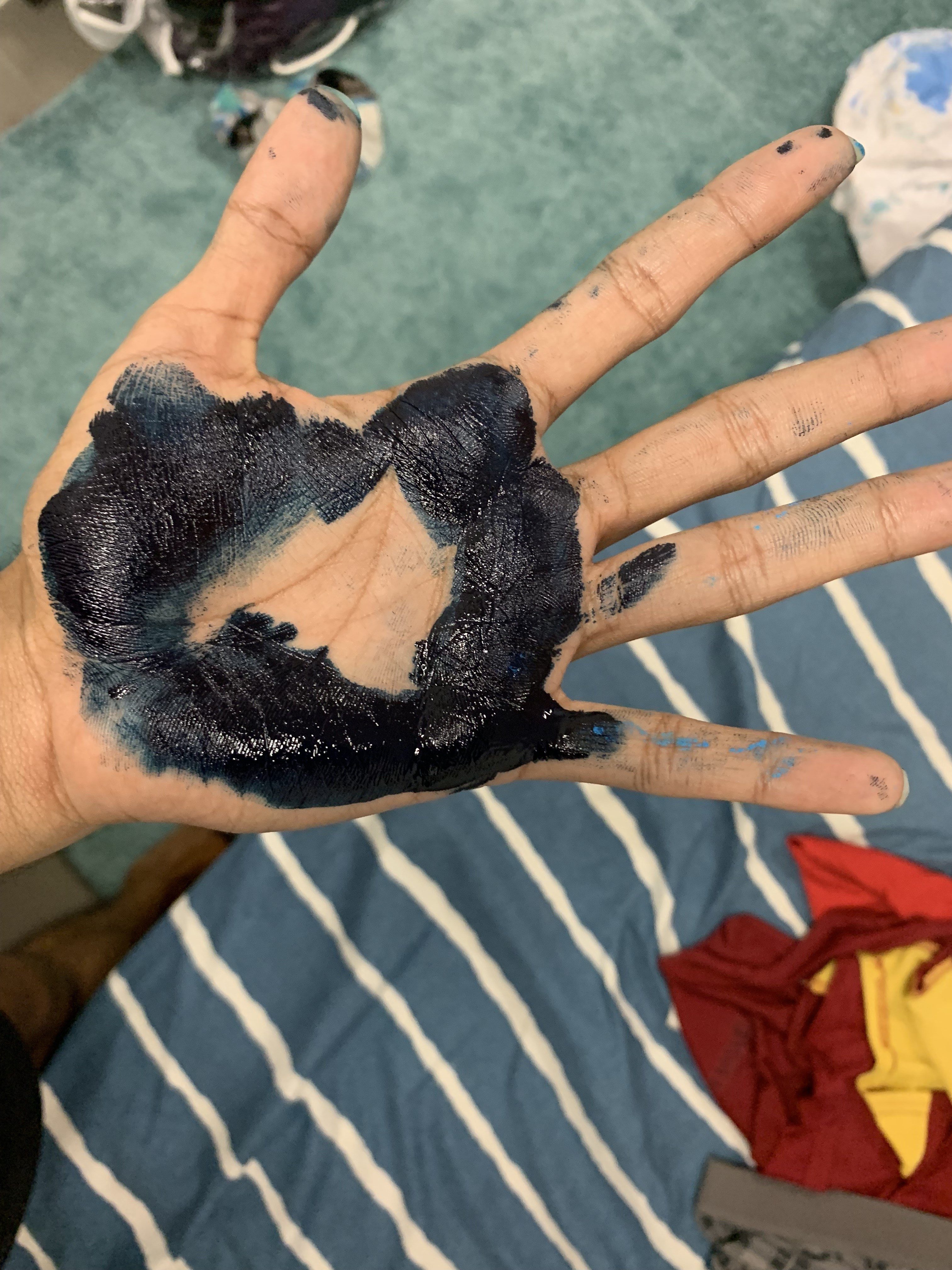 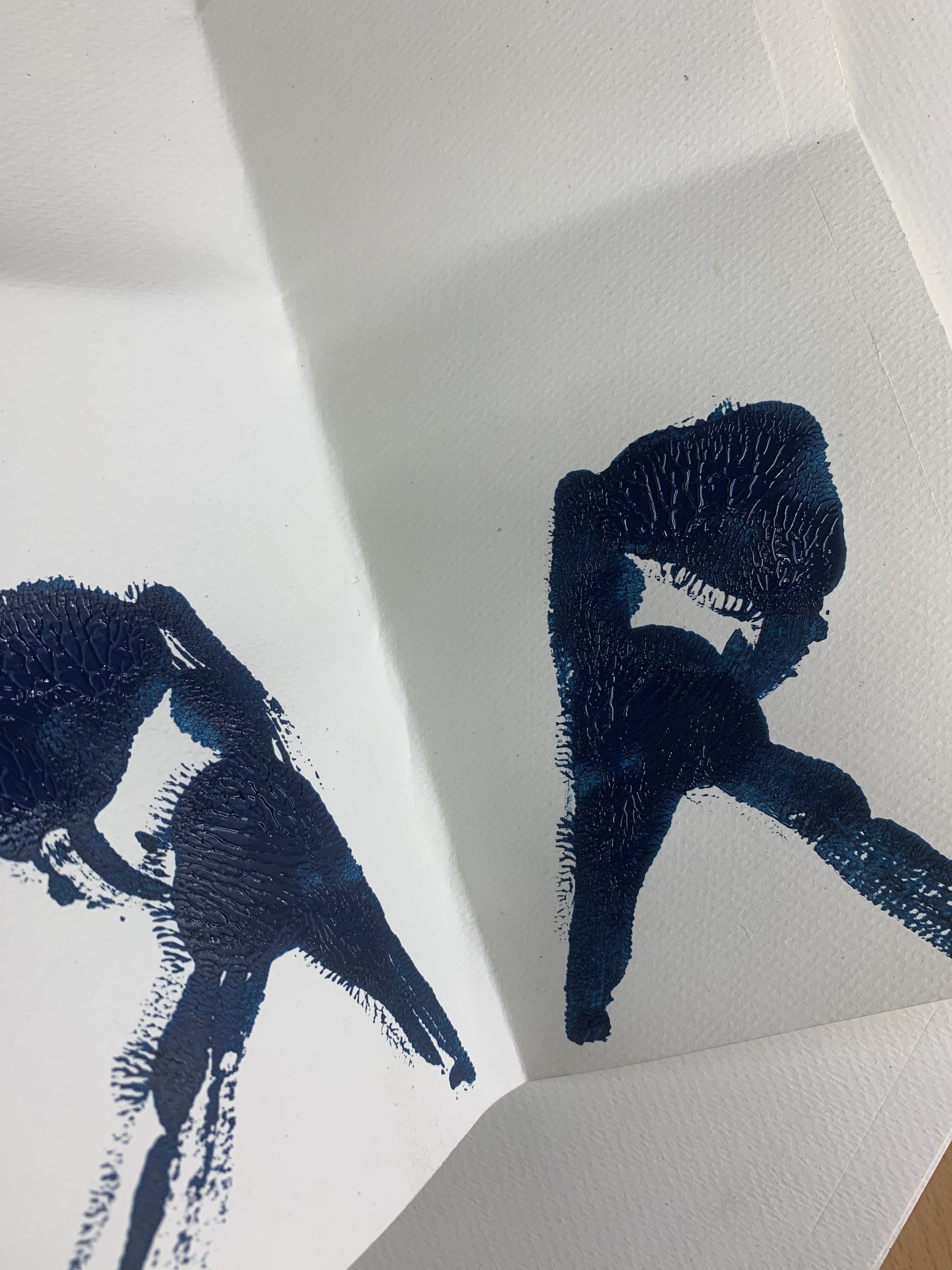 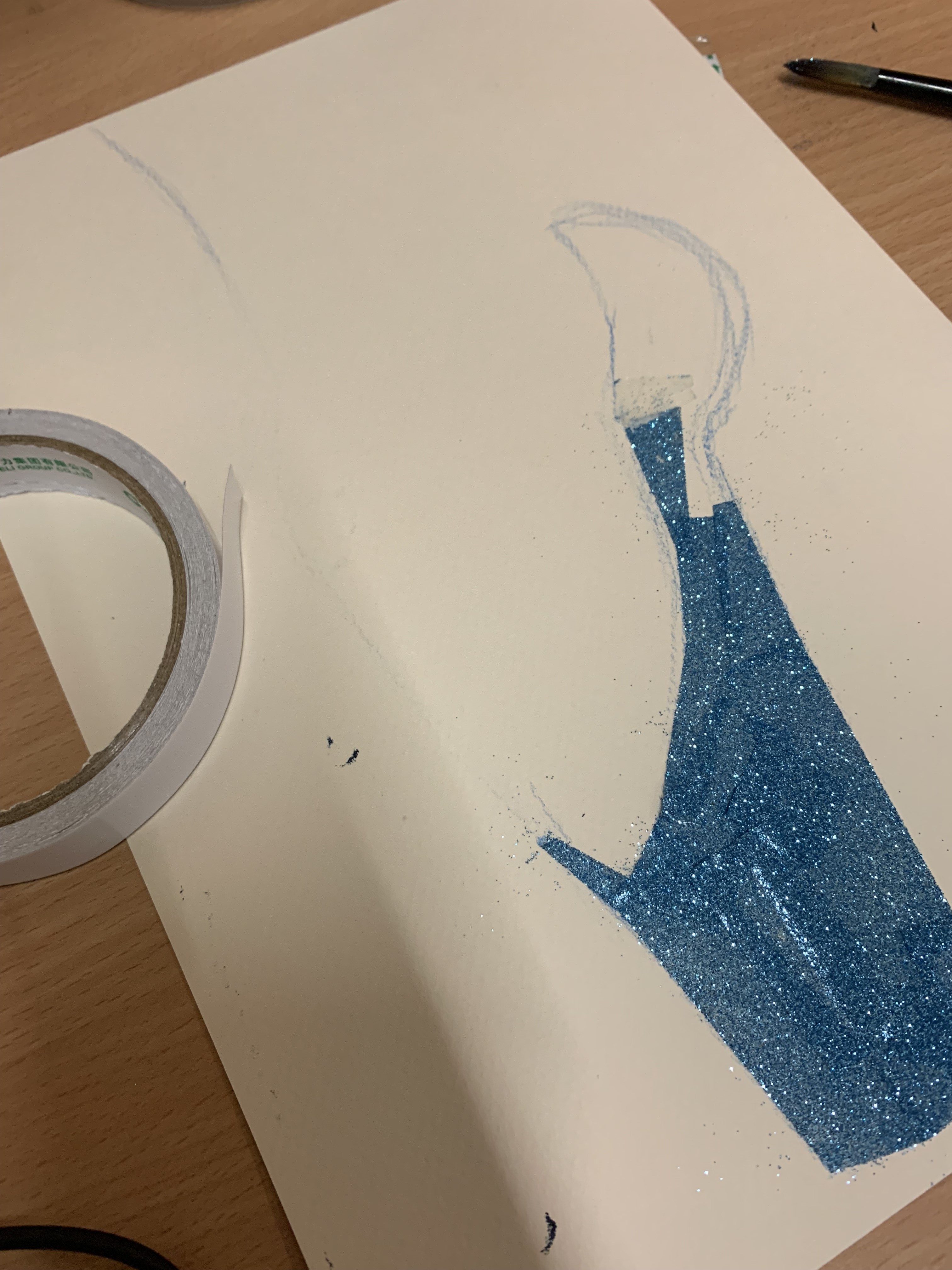 Analysis: For this composition the occupation I wanted to critique was catholic priests. Many religious kids in their adolescence look up to these people as men of God and may aspire to be as ‘pure’ as them. However the Catholic Church, time and time again has been embroiled with repeated cases of child molestation which is the ‘hazard’ and ‘hedonistic’ aspect I wanted to explore here. In 2018 alone, within just the state of Pennsylvania there were 1000 reported cases of child molestations by the Catholic Church. Recently the Pope has also acknowledged the prevalence of the issue. Many blame this perverse sexual urge on the abstinence and celibacy that is enforced upon these religious men. For the letter P I appropriated the use of the staff bishops hold in their hand and used typography for its form. Initially I wanted to use the names of victims however I realised that they were inaccessible due to issues of privacy. Hence I used catholic boys’ names instead as an alternative. I also used a subtle phallic form, representing the top portion of the male sexual organ for the end of the staff. This also then makes the action of the priest gripping this ‘staff’ perverse. For the letter A, I used the form of the bishop hat and replaced it with a condom instead. I wanted my viewers to notice these details on closer inspection but from afar there is a sense of superficial innocence to the piece. I also coloured the thumb and finger to make a V form. Candle wax was dripped on the hand to add a perverse connotation to what his hands may have touched. Under the robes there is another A form in the negative space which I replaced with tissue paper. There is subtle A scratched onto the surface to display the hidden cry for help of child victims. The placement of this under the robes is also symbolic. For the overall look, I used very bold ink lines and colour pencil to give this piece a very children’s colour book page sort of vibe. I wanted the idea of innocence and ignorance to be amplified in every way possible. Hence I used materials that kids will often play with. I also burned the page with a candle as candles are used in most churches and I wanted to use it as an instrument of harm. The burns also act as a permanent stain to emphasise the trauma that many are left with due to many that practice this occupation. 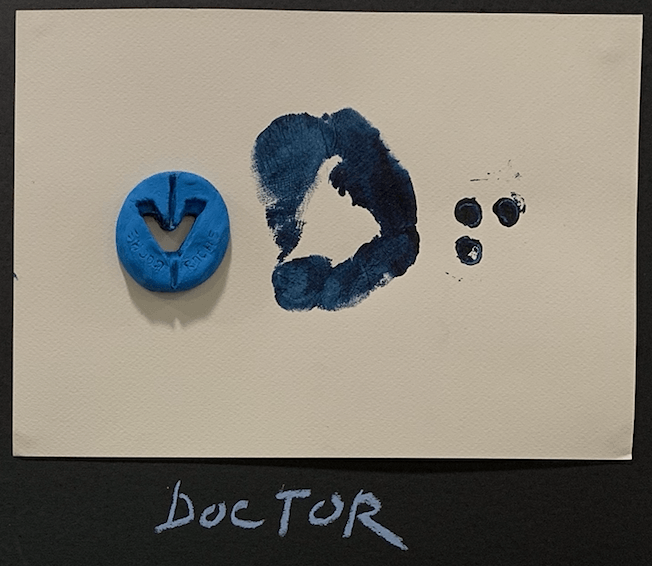 Analysis: For this composition I wanted explore the Job of a Psychologist. Psychologists tend to patients with all sorts of mental illnesses and trauma. Subsequently they too are inherently affected by the emotions of their patients and be triggered by these external factors. Hence many Doctors and psychologists my tend to their own coping mechanisms to reconcile with the intense emotions that they have to absorb and break down in order to treat their patients. Another sub layer would be their easy accessibility to prescription drugs. Hence their need to deal with their own emotions and access to drugs may lead many in these profession to addiction issues. Hence the hazard and hedonistic aspect in this job would be ‘addiction’. I decided to go for a very minimalistic and clinical aesthetic for this composition. For the letter V, I used the form of the benzodiazepine Valium, a powder blue pill, traded under the name Roche. I decided to use clay to make a 3D piece as it is more convincing of the tactility of an actual pill. Clay is also something that kids play with a lot, relating it back to my overarching theme. In the middle the letter is A is in the form of a negative white space — this was obtained by painting the palm of my hand with screen printing ink and imprinting it onto the paper. Hand painting once again is something many kids enjoy doing. For the last piece, I cut up a pill slab of my own prescription medication to form a digital looking letter ‘r’ in lower caps. The blue throughout this composition gives the piece a very X-Ray like and hence clinical look. Even tho I was exploring the job of a Psychologist, I labeled it as ‘Doctor’ as adolescents would categorise Doctors, Surgeons, Psychs all under one big umbrella with their limited vocabulary. Doctor is also one of the jobs many kids look up to. 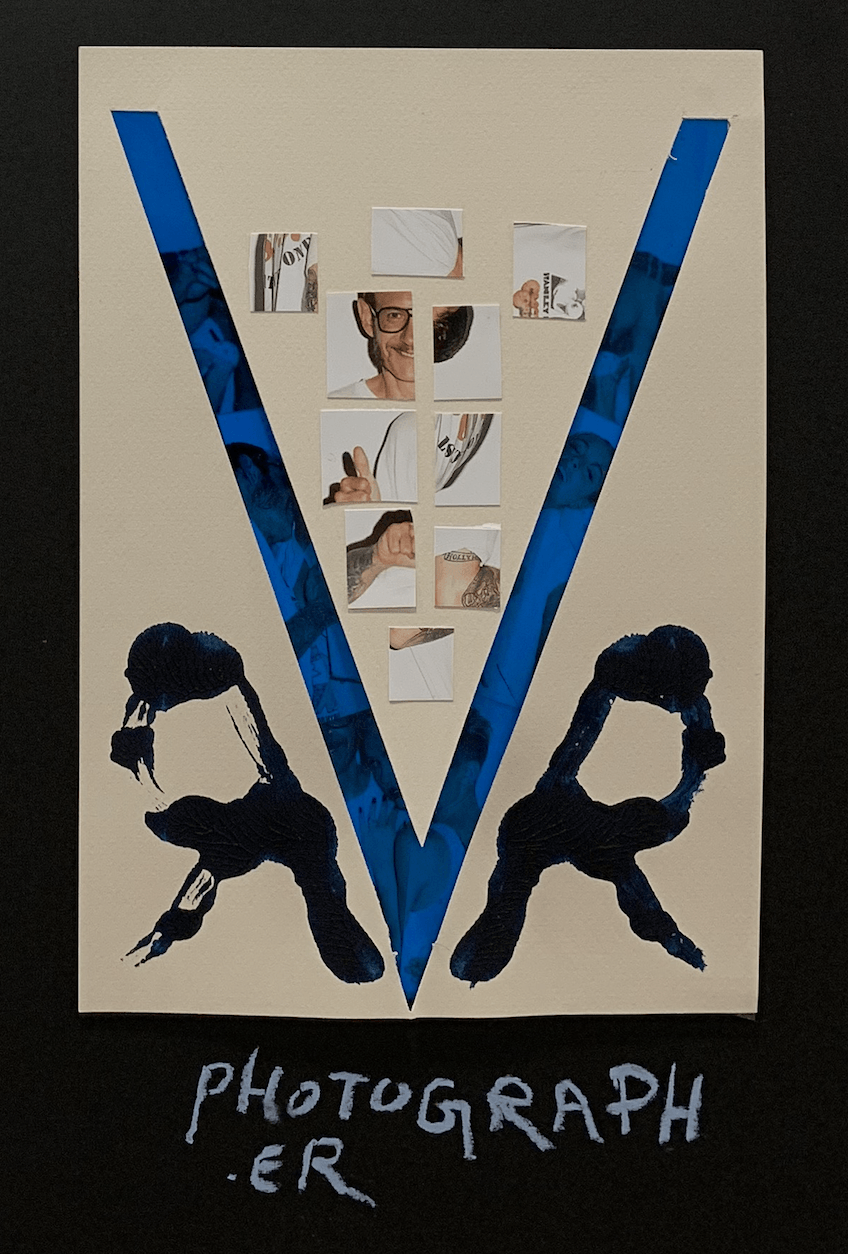 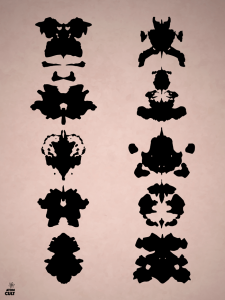 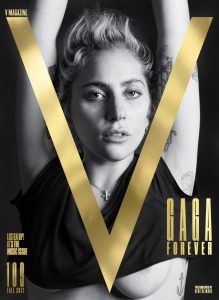 Analysis:  For this composition I wanted to explore the hidden agendas behind many fashion photographers in the industry. I used notorious photographer Terry Richardson as the main subject matter for this piece. He was a photographer that used to shoot editorial pieces for famous magazines. However after many models allegedly accused him of making them perform inappropriate sexual acts on him during their shoot (including performing fellatio and even making them drink their own menstrual blood), most major magazines have since boycotted him. I printed a few pictures of Terry Richardson touching celebrities (during his shoots) in provocative manners and cut them up to form a deconstructed collage. I appropriated the infamous V logo that V magazine uses to frame their main subject matter in all of their cover pages. I placed the ‘innocent’ portions of the cut up pieces within the V frame while placing the incriminating perverse provocative body contact ones behind the blue cellophane paper which I used. This is representative of how as consumers of these famous Photographers we only see the final perfect looking picture and we are usually unaware of the dirt that plagues these practice behind the scenes. For the letter R, I used screen printing ink to mimic my own Rorschach Test – an ink blot test that is used to psychoanalyse people who may have any unstable mental disorder. This imagery further emphasises the sinister and insidious nature in which many Photographers run their operations (especially within the fashion industry). The adolescent sense of playing here, is symbolised via the use of scissors to cut up the pictures and  to create the collage and also through the use of a ‘basic’ painting technique — pouring pain on one half of a paper, and then folding it into two. 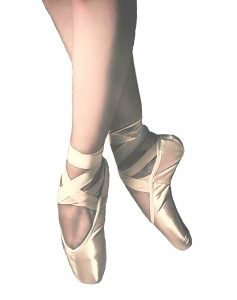 Analysis: In this composition I wanted to explore the occupation of being a full time professional Dancer. Dancing, especially ballet is a form of art many young girls and boys look up to. Many parents also send their kids for such classes as it is seen as a very refined and technically proficient ‘sport’. However it involves immense discipline and the dance industry is often shrouded in controversy due to the brutal way in which it operates – only those that are impressive enough are recognised and established individuals in the industry are often unapologetically critical of those who may not be ‘good enough’. This almost regimental discipline was the job hazard I wanted to explore for this piece. From a young age many ballet dancers are already forced to learn how to go on pointe. Hence I used the form of the pointe shoes to create the letter ‘P’. I used glitter as stereotypically it is a material that many young girls would play with or be fascinated by. For the the letter R, I used a ribbon to mimic the lace of the shoes. I also extended it out of the frame, secured with a nail to create the imagery of a noose, hanging the feet. This was the emphasise the idea of how many dancers suffer from injuries and bruises due to broken bones in their feet. Permanent injury is another ‘hazard’. This is hedonistic in the sense because one needs to fully commit and indulge in this art form to succeed.

Red to many would be the most direct colour to represent something that is harmful. Hence I used Blue instead given the idea of how the harm subtly embedded within these occupations are almost invisible to the innocent eye.

For the font, I used blue crayon and intentionally tried to replicate the sporadic form of a child’s writing.

I named the overall piece ‘Child’s Play’ as it reinforces the idea of innocence but at the same time it is contradictory and satirical when juxtaposed with the compositions — which express how these jobs are not just ‘child’s play’. 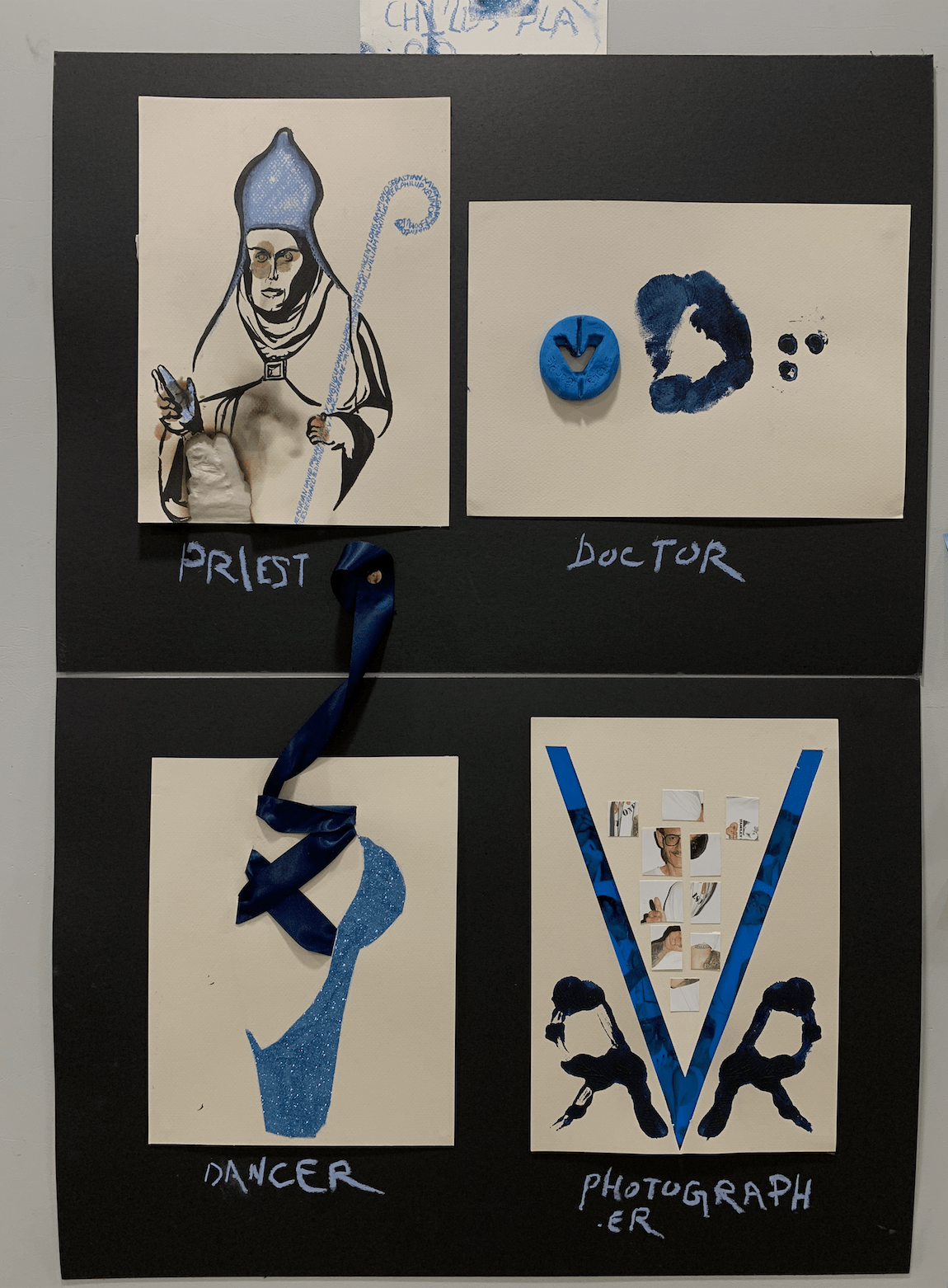 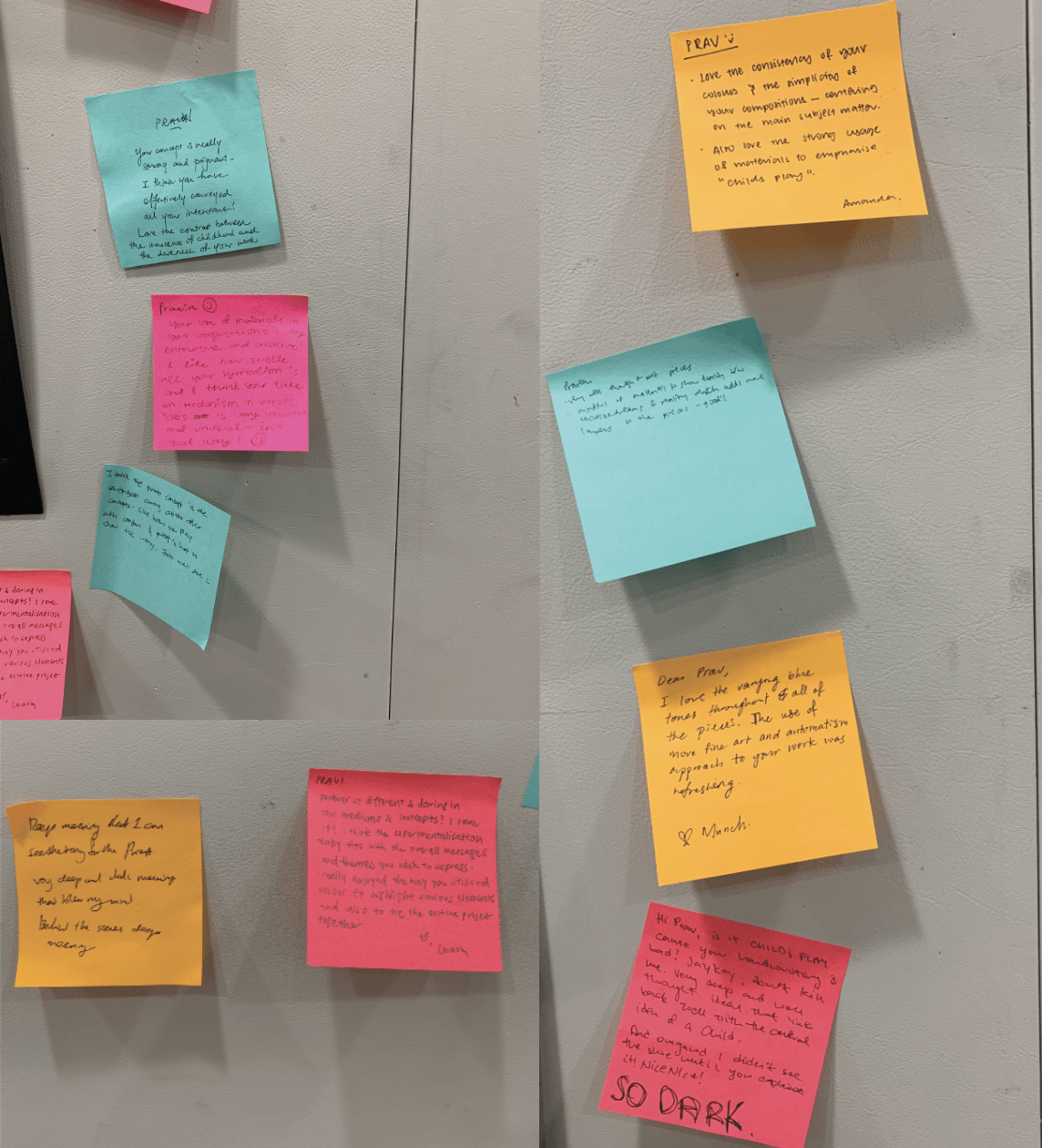