With depleting resources, people are increasingly advocating for the need for plant based diets and Veganism. Common sources of Protein such as cattle and pigs, which have been reared for centuries, are under threat and there is an urgency to harvest alternative sources of protein such as Insects, which are less popular but abundant.

” Businesses that have started to farm and sell insects as food claim their environmental footprint is relatively negligible, and that lean insect protein is a healthier choice for the consumer. “

Mental Health , especially illnesses such as schizophrenia, bipolar , borderline etc are often misunderstood and misinterpreted due to sensationalised portrayal in films and media — The Joker saw many people downplaying the seriousness of severe illness.  Personally I feel, people suffering from more ‘conventional’ illnesses such as depression and anxiety are stepping forward for help and are more readily accepted. However those with more ‘severe’ or culturally ‘frowned upon’ ones still face social stigma and discrimination. People tend to be more wary of them and see them as ‘threats’ more so than people who need help. Borderline however is one that is also stigmatised by Medical Practitioners. It is often maligned in the way it is perceived.

“When they discuss cases, the term “borderline” can take on derogatory overtones. A Canadian study found that psychiatric nurses were more likely to sympathize with hypothetical patients if they were labeled schizophrenic rather than borderline, even when the symptoms described were similar.”

“This emotional instability leads to some people self-harming or abusing drugs and alcohol to cope. One in 10 people with a BPD diagnosis kill themselves.”

Over the past few years there have been major milestones for the LGBTQ Community World Wife with the legalisation of same sex marriage in countries such as the U.S and prominent figures such as Artists (Lil Nas X) and  Apple CEO (Tim Cook) coming out as Gay. However at the same time, this has resulted in an equally strong resistance. LGBT hate crimes continue to happen and Religious Organisations still deem it as unnatural. This has led to continued discrimination and infringement of personal rights worldwide. In Singapore there is still a very strong resistance to the abolishment of the infamous 377a. This is often due to lack of knowledge and empathy.

“Same-sex sexual activity is a crime in 70 countries, and can get you a death sentence in nine countries, including Iran, Saudi Arabia, Sudan and Yemen. And even where these restrictive laws are not actually enforced, their very existence reinforces prejudice against LGBTI people, leaving them feeling like they have no protection against harassment, blackmail and violence.”

Substance Abuse Disorder or Addiction, is a world wide epidemic that has been on the rise despite expenditure on healthcare resources to curb it. This is due to the fact that many end up relapsing after undergoing treatment, indicative of a ‘failed system’. In the US itself, there is a Major Opioid Crisis due to the prevalence of prescription pills coupled with the lack of external support for addicts. People get hooked onto painkillers and eventually turn to cheaper drugs such as street heroin, fentanyl etc. The stigma stops many from seeking potential help until it’s too late (further spiral or overdose). It affects family and friends, has social and economic consequences, and healthcare and environmental impacts. Furthermore, proper rehabilitation centres are expensive. In most countries such as Singapore, drugs are criminalised, regardless of the reasons the person may have had to fall into addiction.

“Nearly 64,000 Americans died from a drug overdose in 2016 alone. Opioid overdoses accounted for more than 42,000 of these deaths, more than any previous year on record.”

The issue is important as despite advances in our technology and healthcare, addiction and deaths from overdose have been steadily increasing rather than decreasing. Addiction not only affects people within the social circle of users but leads to detrimental economic burdens and impacts on the environment. It is a major cause for concern as despite initial successful treatment, almost 80 percent end up relapsing. Most however do not even seek help to begin with. This points to a ‘broken system’ and it needs to be tackled from a new perspective. In the US itself, overdose from drugs has become the leading cause of death for those under 50.

“People with substance misuse issues are less likely to be offered help than are people with a mental illness or physical disability.”

Addiction affects users and their immediate family and friends. However it is the users who bear the stigma and often end up being ostracised by society even after being clean. This discourages them from contributing to society and many end up relapsing due to not knowing what else to do. Fundamentally being an addict becomes their identity (just like how society views it as such). Those who want to seek help, are too scared to for fear of being harshly treated and end up giving up the fight to recover. Some people are ‘born’ addicts when they are born to addict parents with drugs in their system. Others often have other trauma or pain in earlier phases in their life which eventually led them to spiral into substance abuse. The public often forget that many of these people are human and were not born abusing drugs.

It often ends up in poor socio economic status, prison or death. An addict who does not recover or gets integrated back into society, gets stuck in a vicious loop. They also end up affecting people close to them permanently as addiction is never a problem exclusive to just the user.

Recovering addicts or addicts who want to seek help. ( Remind them of their worth and that they are not defined by their history of abuse). The aim would be to encourage them staying clean, getting back involved with family, people. However since addiction is not just isolated to users, a separate target audience comprising of people affected by a loved one’s substance dependancy could also be drawn up. This would ensure a more affect.

Empathetic, rather than punitive and deterring which is the case for most existing Drug Campaigns. It should  encourage them to seek help and remind them that there is a support system they can rely on. It should ideally also come off as warm as opposed to being disengaged. Users should remember the motivation to stay clean such as their kids or family members who will be adversely affected if they continue to neglect them. 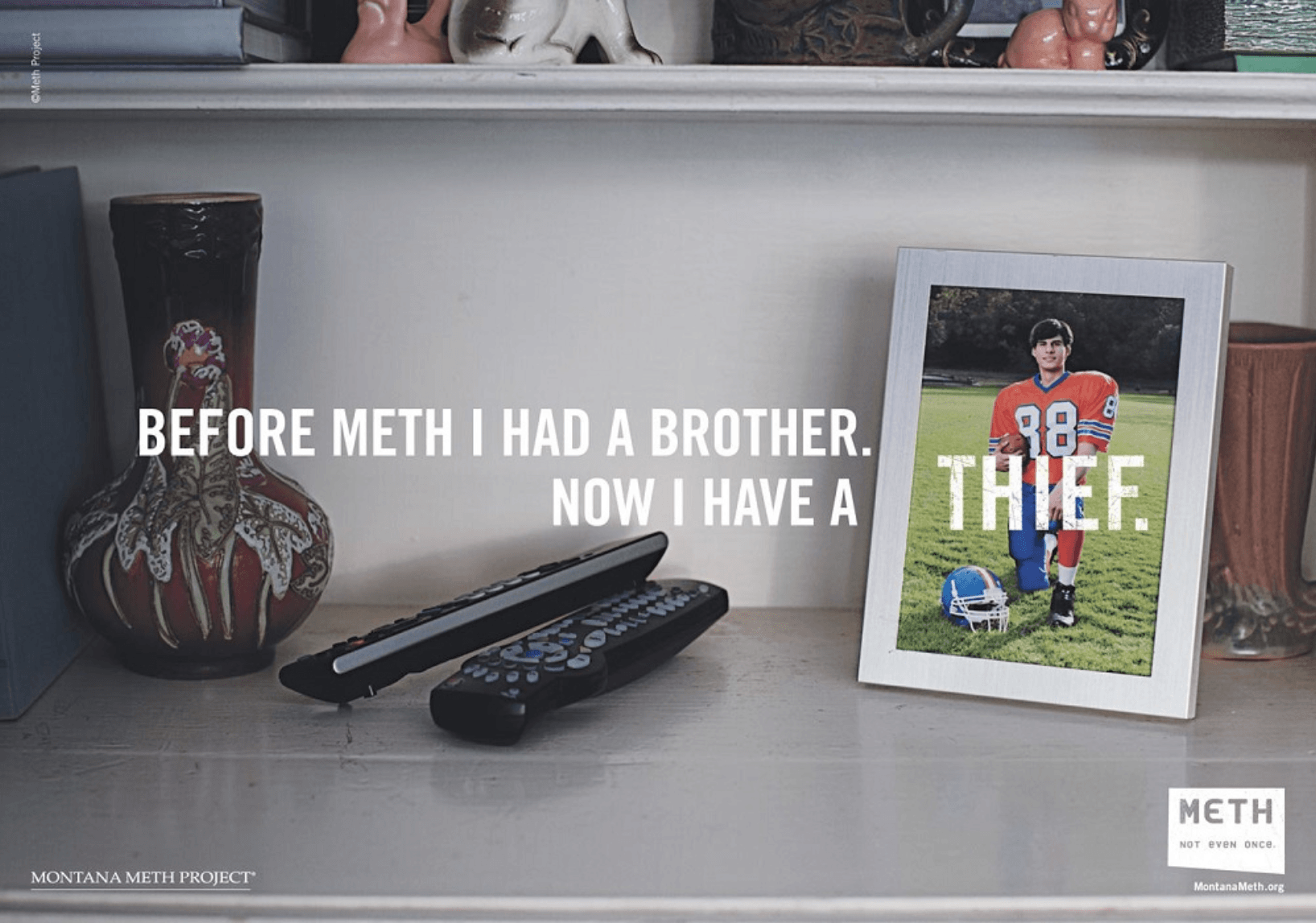 This campaign is executed via a poster which aims to deter and instil fear into potential drug abusers. It is personal in the way it utilises a photo to make the message more intimate for the viewer. The fonts used are also bold, firm and white, reminiscent of white powder. The colours are lowly saturated and the mood of the visuals is relatively sombre. The use of an unsuspecting and ordinary shelf as background echoes the message of ‘home’ and how drugs can so easily pervade one’s family.

However the use of thief in a larger font to describe an addict is exactly what perpetuates the stigma and is highly discouraging for both family members or users. 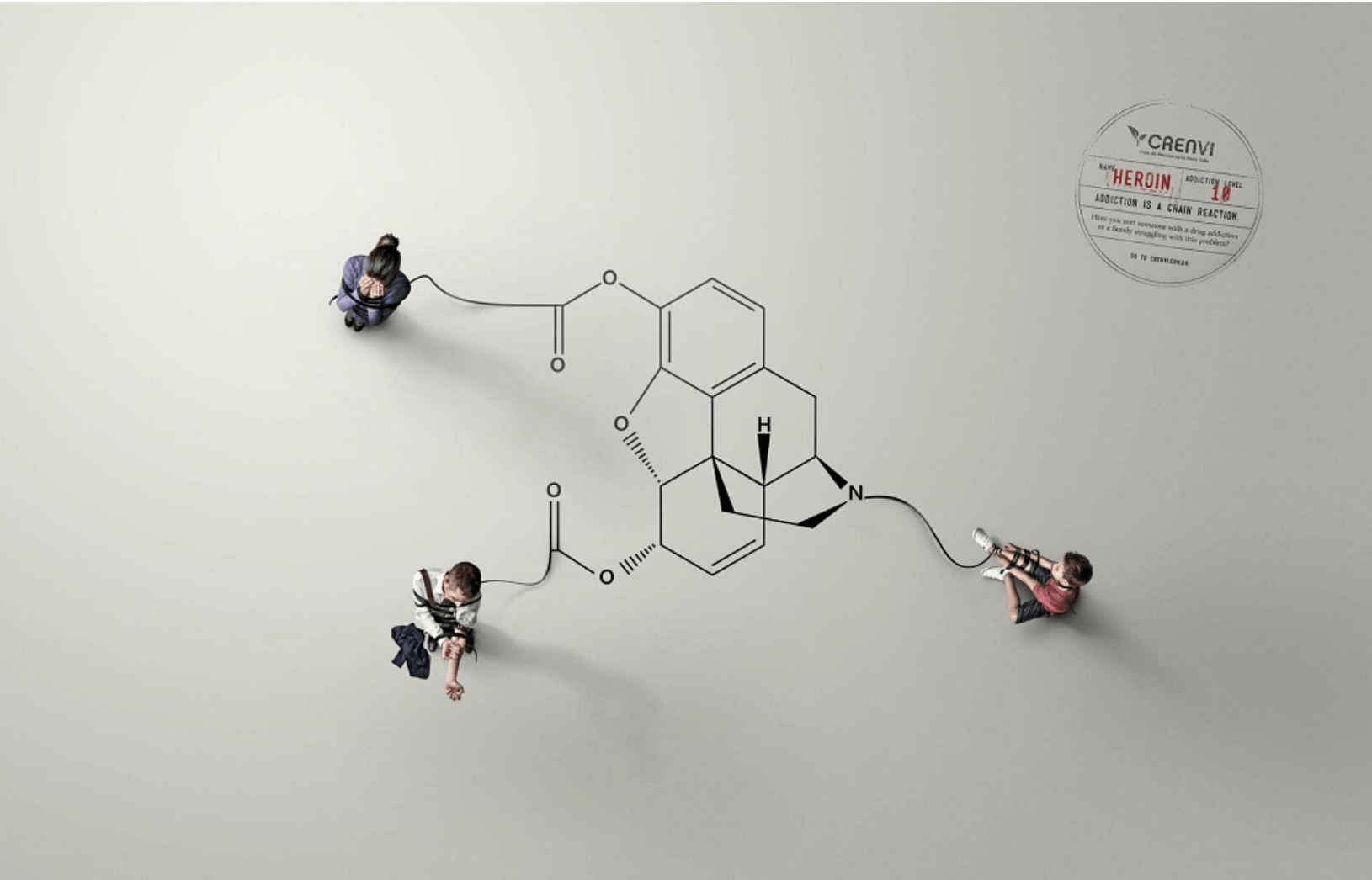 This campaign is based on the organic structure of Heroin. It uses the branches in the structure as a tourniquet for the Male who is injecting himself, while the other branches extend out to bind his kid and Wife. It smartly and effectively captures the idea of how substance dependence directly affects loved ones. The colours used are predominantly white, black and red (Clinical). Text is incorporated within the stamp motif. Heroin and 10 is in red to highlight the severity and danger of the substance. Personally I feel, this campaign utilises a good balance of seriousness and empathy. It calls for potential addicts to reflect on their action rather than outrightly berating them. It allows for thinking space rather than aggressively putting forth an idea.

Use of Family to engage and stir emotions of audience.

This film is by CNB’s ongoing Drugs Free Sg campaign. It dramatises the scenario where an ‘addict’ kills a toddler in broad day light to pawn her Jewelry for drugs. As much as the purpose was to send a very serious message, I feel that it failed in portraying addiction in a nuanced manner. The exaggeration perpetuates stigma and would only discourage affected ones from being supportive. It is also too unrealistic and disengages the public, causing discourse between more widely read youth who are not convinced and zealots whom on the other  buy into the idea religiously. Users who view this film would also be further discouraged from integrating back into society due to the way they are portrayed as murderers even though substance dependency has no direct correlation to murder.