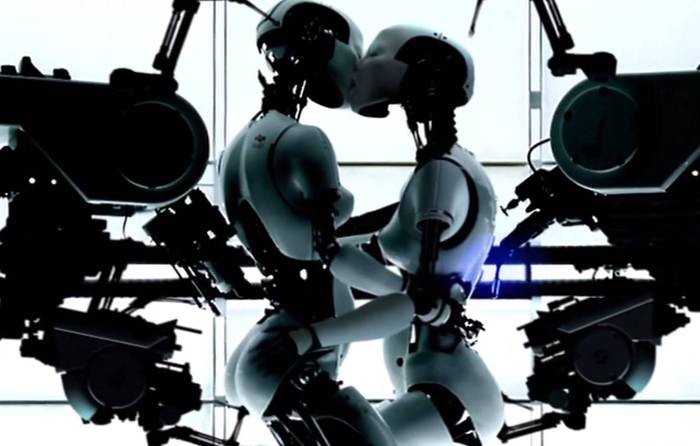 Overarching Thoughts (on GAN , ‘ The Uncanny’ in contemporary society)

In this article, the authors explores how Generative Adversarial Networks (GAN) and Machine Learning have intensified the phenomena of the ‘uncanny’ — described as a certain level of discomfort or unease one feels when a machine mimicking organic human behaviour comes seemingly close to, yet disjointed and ‘faulty’ in its portrayal. It’s the simultaneous humane semblance and recognisability in the machine that plays with our emotional perception, yet our awareness and consciousness that it is a visibly artificial machine-construction that evokes this sensation.

It is provocative, provoking, unsettling and ultimately a unique reflection of our own perception of ourselves. The dysfunction in the machine and its faults are not rationalised in the way we would observe, clinically, the faults of a system like a washing machine or a vehicle (also machines). It is the machine-learned human nuances these machines have and their anthropomorphic form that seduce us into making some sort of ‘involuntary’ psychological and mental connection to them. Their form, appearance and behaviour (though crude, a sufficient enough representation of the human) creates an intuitive intimacy and we project our own feelings, experiences and learned world views onto our observation of this machine. This at the same time is inextricably linked to our obsession, fear and intrigue with technology/artificial intelligence.

It is not just a random discomfort but one that deeply is rooted in some way to our subconscious feelings towards technology’s presence and co-existence in the contemporary world. For example, if a primitive human like a Neanderthal who has no known knowledge or experience with technology sees a work like Ken Feingold’s ‘If, Then’ 2001 , it will probably be shocked and intrigued in a very banal and unintelligent manner.

For us humans who have some preconceived perception and familiar intimacy with technology and are constantly adapting to live with it, as augmentations of our body/mind, a representation like that is even more uncomfortable and uncanny. It plays on this innate, (irrational?) fear (one that has been propagated by novels, movies and media) of artificial intelligence eventually becoming intelligent enough to adopt and appropriate what we hold on to as our ‘humanity’.

Essentially this concept is what we believe distinguishes us from machines. Though crude in its superficial portrayal, any machine that is mildly capable of replicating some sort of human learned behaviour like speech immediately destabilises our position of supremacy, reminding us that the lines between the real and ‘unreal’ is becoming increasingly blurred. It also plays on this fear of automation and artificial intelligence replacing the role of humans.

However this is not something that is insignificant. In fact, I personally feel that this concept in relation to GAN in this context then opens up the possibilities for a very contemporary personification or reflection of the human condition. The outcomes of these GANs mirror the change in perceptions and emotions the amalgamation of technology has had on us. They mirror the fears, attachment and feelings we have grown to possess with the increasing presence of these artificial ‘bodies’. After all, this is an extremely valid, relevant and powerful aspect of the contemporary human condition that cannot be ignored. It is this then, that I believe, plays a significant role in plunging us into the ‘Uncanny Valley’ (first introduced by Masahiro Mori in 1970). It is only when the ‘humanoid’s’ anthropomorphic form is transitioned into being fully indiscernible from that of a normal human that we find ourselves out of this disconcerting state of Uncanny. 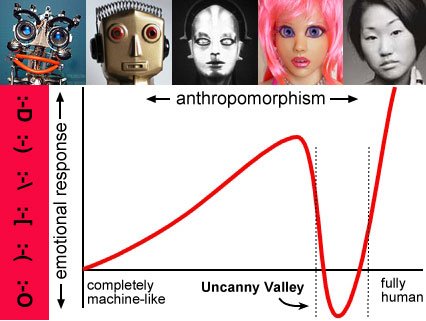 Personal experience of ‘the Uncanny’

This music video by one of my favourite artists, Bjork came to mind with regards to ‘The Uncanny’. Though it is a music video and I am aware that it is graphically modelled and not real, the portrayed interaction of these anthropomorphic humanoids (the way sexual intercourse and ‘love’ is expressed via turning of gears in the figures, the leaking of fuel liquid etc) evokes an uneasy yet seductive feeling. The song being about ‘Love’ — a feeling that is very humane and far from machine, being portrayed by humanoids then makes us for a moment re consider if ‘Love’ is exclusive to us and if the ‘Love’ we feel/know of is just one possible perception limited by the human experience.

FURTHER THOUGHTS (On Being Foiled)

The article describes the Generative Process of the work ‘Being Foiled’, as a Positive Feedback Loop. By using the initialised system that is pre-trained to produced Unreal, Deep Fake Portraits, (based on the dynamics of the generator and discriminator) and then subverting the function by ‘fine tuning’ the system, the machine goes through a 3 Part Process (Divergence, Convergence and Collapse) which leaves an abstract ‘trail’ or track of the deep fake construction and configuration process. The outcome is essentially a gradual and increasingly intense breakdown from imperceptibly realistic portraits to discrete geometric shapes, bold colours and full abstraction.

As the portraits breakdown in this feedback loop, we see prominent blue lines marking the face shape, eye contours and silhouette of the hair that intensify and retain giving us some sort of ‘clue’ on how these remaining parameters could possibly be the basis for a Deep Fake face construction. In’Being Foiled’, all the portraits lead up to one identical abstracted image. This suggests that the system in its deep learning process of being fed countless faces, (constant reaction to discriminator by the generator and vice versa), might have determined/learned a standard and arbitrary ‘blueprint’ as a basis to construct convincing Deep Fakes that ‘dupe’ the discriminator into recognising it as a real face.

The unpredictability aspect of the Generative Methodology in the GAN system, is most noticeable in what is described as the ‘peak uncanny’ in the iteration of the early stages of the feedback loop process. 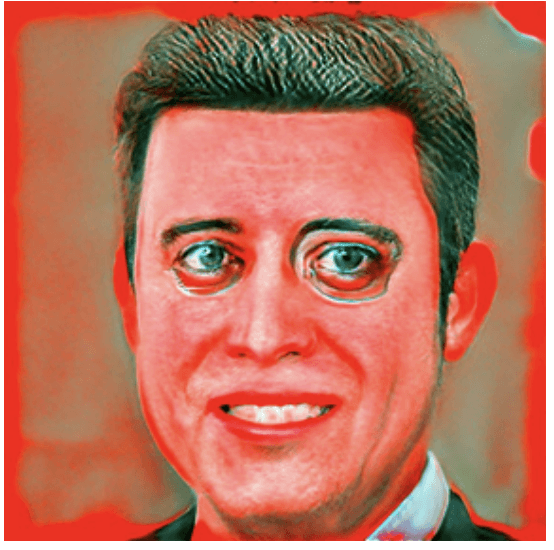 In this image, the bold red hue pervades through the face and the background, while thin blue lines exaggerating the contours of the eyes, face and hair are present. The eyes are misaligned, the hair highly regularised and simplified as crosshatch lines and the wrinkles around the eyes unrealistically pronounced.

What the authors’ describe as ‘fault lines’ of the system ‘indicative’ of its generativity, these very perceivable and consistent marks in each iteration points to the relative points of the system where it is at it’s ‘weakest’ (in this context, with regards to which features of the face it faces the most struggle in replicating the organic human face). The word ‘weakness’ is used here relative to system’s objective and prescribed function. In fact, this very weak ‘points’ I describe, are probably the most optimal points from which the unpredictability potential of the system radiates from.  In this concentrated areas of ‘fault lines’ where the system breaks down and exposes itself most apparently, there is potential for the designer or artist to then target and expand on propagation in these areas, perhaps by by fine tuning the weights of the generator or by some other relevant manipulation.

However part of generativity and in the GAN system is the lack of control we have over the system. We are able to trigger and adjust the weights of either the generators or the discriminators but the circular loop in which the two entities communication and react to each other, is constant and immutable. The information that is communicated between the two changes depending on how we fine tune the system but the fundamental process remains the same. There is no fixed end state and the systems constantly evolve over the training process.

How generativity is successfully harnessed in this work and exploration is by fundamentally subverting a relevant and powerful machine constructed system (GANs & Deep Fake). Instead of constructing a generative system from scratch, an existing Generative System with an innate objective function is manipulated in such a way that it’s underlying unpredictabilities cause a feedback loop that deconstructs and reverses the Deep Fake Process into Abstraction.

Essentially a system that is trained to produce Images that we are unable to distinguish from real images, is manipulated into accomplishing the exact opposite. What is then significant from this outcome is the fact that a generative system is capable of manifesting itself in this extreme duality — two very different iterations that diverge from a common process. It is then our role as Artists to trigger or explore the divergent and variant outcomes these ‘closed systems’ can produce, by first analysing and then manipulating the interactions between the objects of the system and, our interaction with the system in its design process.

We also need to be conscious in the way the ‘Artistic’ outcomes of these Generative Process are presented: “while initial mesmerising and transfixing, can quickly become banal, monotonous repetitions for the sake of overwhelming the viewer with the “sublime of algorithmic productivity” (Zylinska 2019).”

Though it is argued in the article that this very algorithmic representation is powerful, we have to consider the affect and over saturation these type of repetitive output can have on our audience — we do not want them to be immune or ‘numb’ in their intuitive reaction to the works. Hence it is important to possibly explore how these iterations can be displayed — perhaps via projection or by intersecting the physical and virtual planes. One question we can ask ourselves as Generative Artist is if it possible to enhance the ‘experience’ of the dialogue with a closed system without taking away its essence?

One Reply to “Reflection — Amplifying The Uncanny”