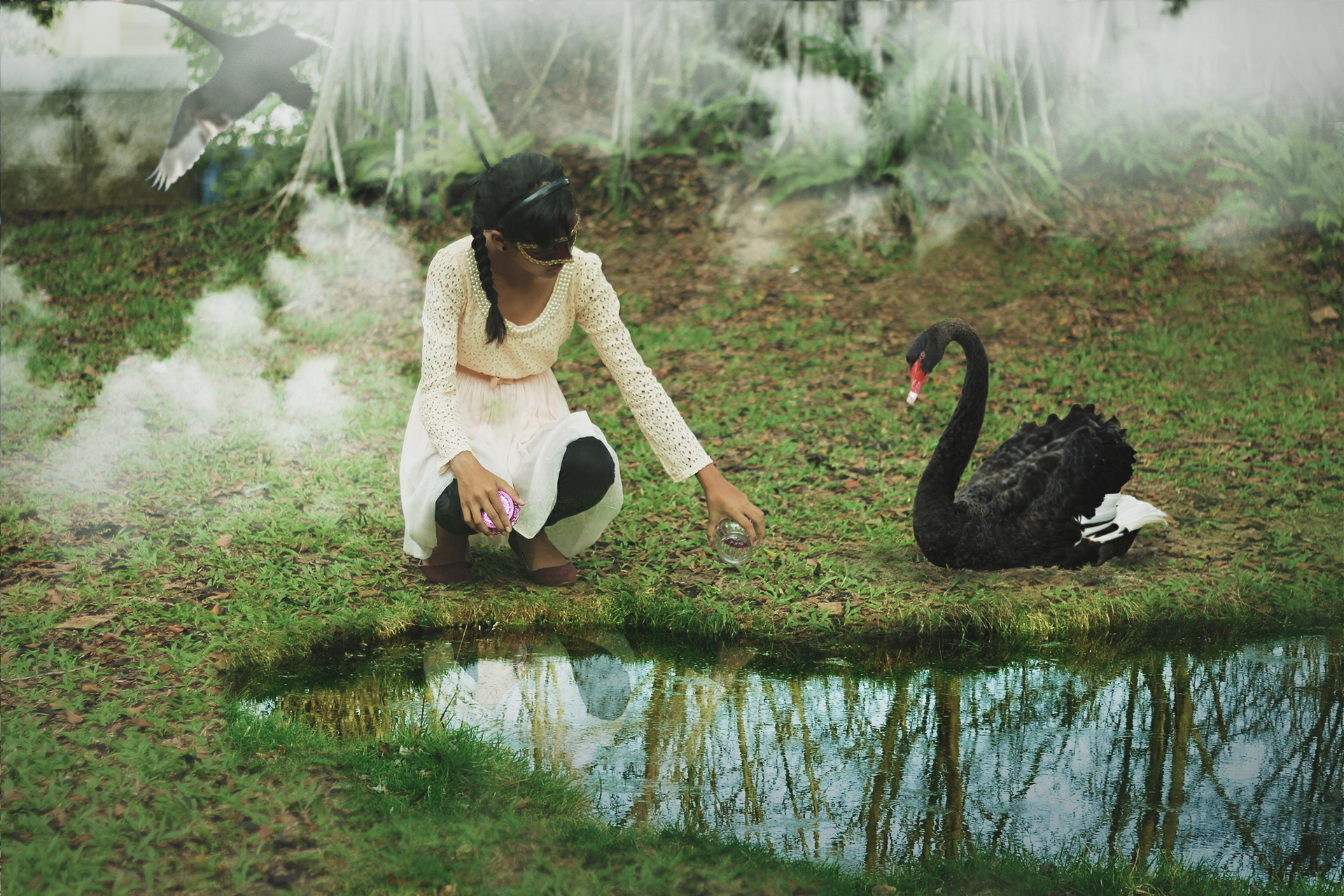 Along The Path
As a child, we grew up reading fairytales where they were just part of our imagination. They exist as fantasies that developed the children’s creative minds. Growing into adulthood and looking back into the stories, I realized how there are deeper meaning that lies in the fairy tales of my childhood than in the truth that life teaches.

They say that childhood is a time when one’s mind is asleep.

Hence, the concept I am going for is a fantasy-fairytale imagination story where I portray the fairytale we read when we were kids actually taught us lessons and skills to assist us as we grow up into adulthood. ‘Along The Path’ series will depict images of a character going through obstacles and challenges along her way to her destination goal. How she overcomes those challenges and meets new people.
Artist Reference

1) Katerina Plotnikova – Another Tale About Wonderland
Katerina poses with models and live animals where no photoshop editing is applied. Her signature style is to create a soft, magical and fantasy setting due to the slightly desaturated images. I was inspired her by that look and feel to give my photographs a dreamy environment.

She also shows the relationship between human and animals in a forest habitat. Since my storyline had some animals in it, I took reference from her images to see how she composed the animals in them so I can create a warm and innocent mood. 2) Lara Zankoul
Lara creates fantasy landscapes where she defies time and gravity. I was mainly inspired by the use of scale, giving the images a whimsical and out of this world concept. The concepts are initially expressions of her subconscious as they are spontaneous visuals in her mind. Reflections
Initially, I thought a set of 90 images was too many for us to do. However, after organizing the storyline and drawing up the storyboard then I realized how I had to remove some parts of my story to fit the 90 images requirement.

Through this project, I was given the opportunity to create my own ‘world’ where I got to share with my classmates. I also learned how compositions can make a big difference in the flow of your series. I had put a lot of thought into the props, locations and costumes to best fit my story and evoke a certain feel.

Although I was a bit disappointed at how rushed I was when doing the post-editing, I had fun doing this project as not only did I explore the world I had in mind, I also managed to execute them to what I had expected. 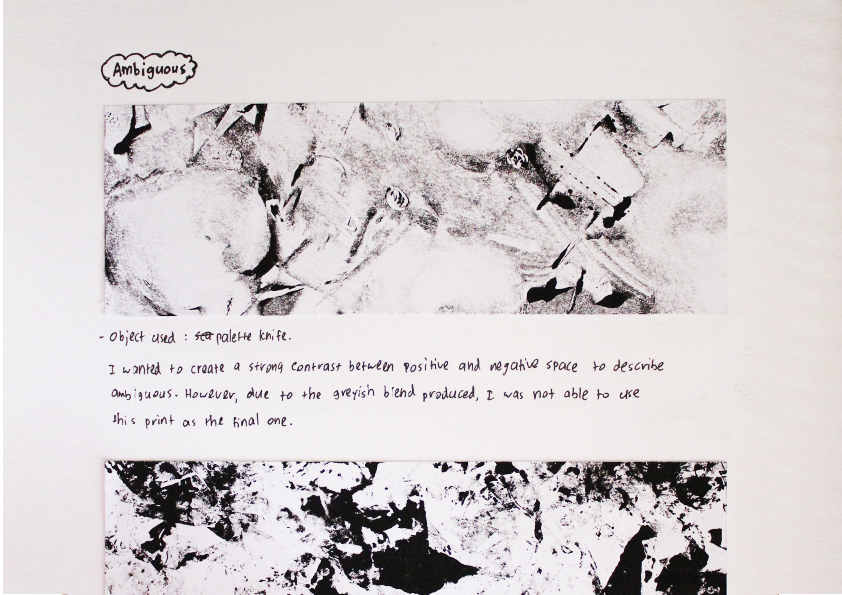 Research – Sketchbook
The following are some of the trial and error I did during this project to test out the different outcomes from different materials and techniques used. 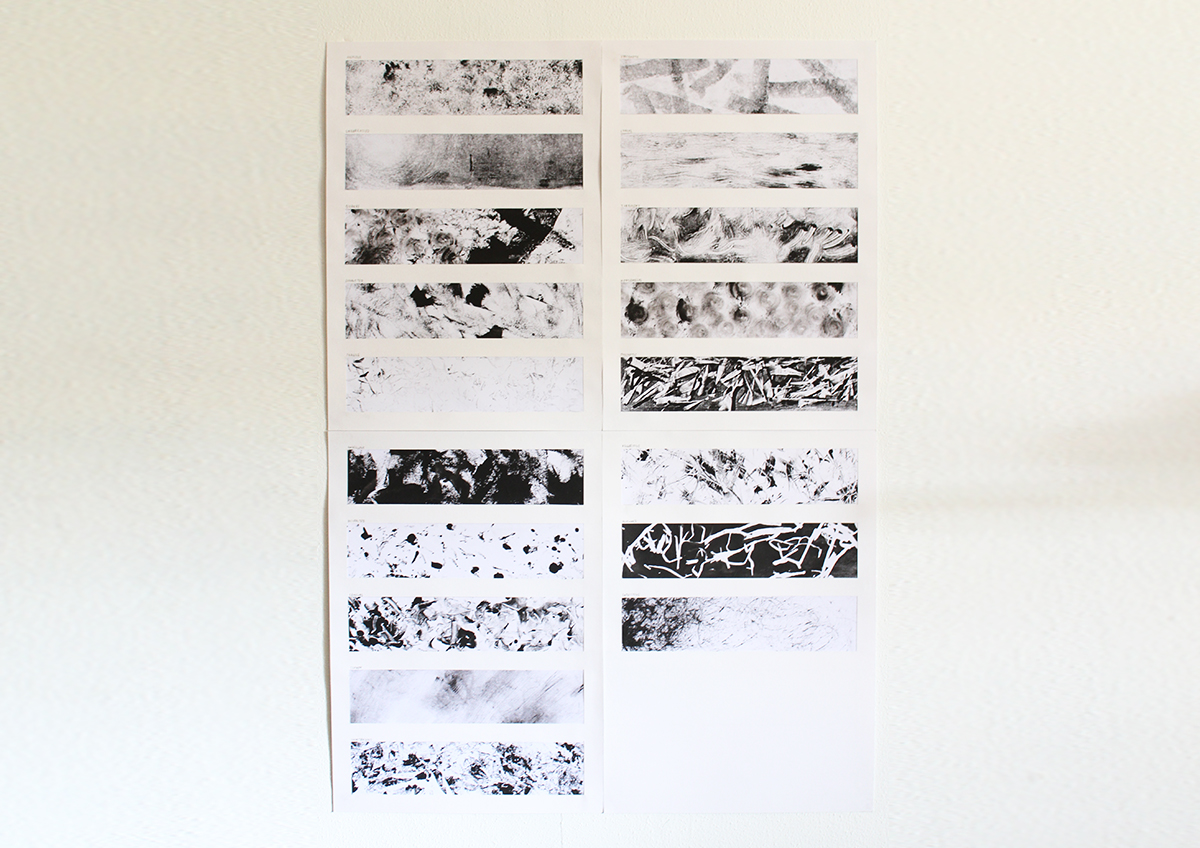 Final Presentation
A line is a dot that went for a walk. This project is about using lines to create concept and interpret topics given. 1. Anxious
Anxious is a feeling of distress and uneasiness, where we tend to think too much. At this state, it feels as if our mind gets so cloudy as random thoughts pass through. Therefore, I created a murky concept marked with indistinct masses and streaks using a metal dish scrubber.

2. Bizarre
In my opinion, Bizarre can be expressed as something that is so overwhelming, where many things are happening at the same time. This can also result in confusion. Hence, I used a number of different materials that left imprints on the canvas to create this concept. This includes the use of masking tape, dish scrubber, palette knife and scrunched up paper. However, from the feedback I received, I should have left some traces of the materials onto the canvas to add on to that ‘Bizarre’ concept.

3. Fragile
Fragile can be expressed as something that is thin, delicate and can shatter at the slightest touch. Hence, I used scrunched up paper to lightly dab on black ink onto the canvas. I made sure the imprints looked as if they are not there but they are. The broken lines created by the texture of the paper also added on to that concept.